The focus has been on garden ringing while travel restrictions were in place.

Several of the Group have been ringing in gardens for many years so useful long term data is being collected. This Coal Tit with abnormal plumage was ringed in 2015 and has only been re-caught once since. The longevity record is over 9 years so a while to go yet for this one. 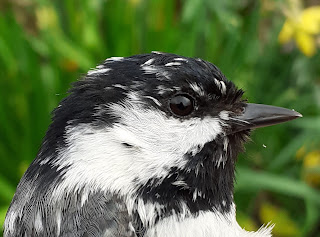 Siskins are one of the most frequently caught species in March. Over 200 ringed by the Group so far this month. 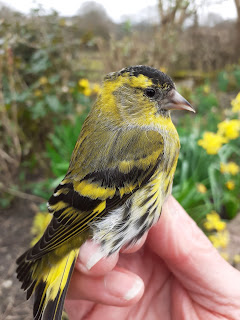 Some Siskins are starting to show signs of breeding while others are still migrating with a lot of fat, the heaviest weighing 16.6g

Many are site faithful both on migration and breeding.
Richard  caught 2 Siskins, both ringed at the same time in January 2019 and caught together this year, 2 years later. One of them was also caught in April 2019 with a brood patch so breeding locally. Arfon had the same with 2 ringed together last February and caught side by side in the net this month.
Siskins also move between our gardens in Llechryd, Boncath, Ffarmers and Bancyffordd even though up to 46 km apart which was the movement of a female from Boncath to Fframers and back again. Siskins frequently move backwards and forwards between the closer gardens which although 6 km apart are joined by more or less continuous woodland. 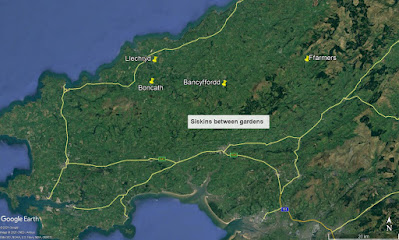 A first though was this local Lesser Redpoll movement, ringed in Llechryd in January when several were visiting the garden and caught this morning in Boncath. 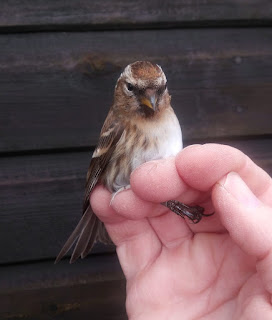 We are waiting for details of 2 birds ringed elsewhere and caught in Wendy's garden this weekend, a Siskin and Coal Tit. The Coal Tit recovery is of particular interest....

Some recent news of other birds ringed elsewhere

Blue Tit
ARF3088 ringed in Sunnyhill Wood, Tregaron on 31/05/2020 as a pullus by Mid Wales RG
Re-encountered  Llechryd, Ceredigion 06/03/2021  279 days 51 km WSW
This was an interesting movement as Blue Tits do not often move far. The route was possibly down the River Teifi.
- Of interest as we write a Blue Tit has appeared on Skokholm this morning !
Goldfinch
S872982  Ringed Funtley, Hampshire 03/12/2017 by Trevor Codlin
Re-encountered Llechryd, Ceredigion 08/03/2021 1191 days 271 km WNW
This too was interesting because the same movement of a Goldfinch had occurred previously. One ringed in Funtley in March 2016 was in Llechryd in April 2016, 29 days later.
The map shows some of the Goldfinch movements to and from Llechryd 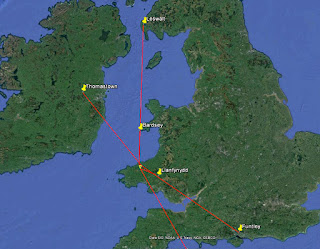 A Goldfinch caught today in Llechryd had been ringed at Mwnt in 2018 while whoosh netting Linnets for a RAS project. As always, March has proved to be an important month for recording Finch movement.
Colour ring recording plays a very important part in the BTO ringing scheme. We encourage photographers to help with this. We were grateful to Tommy Evans, one of our local photographers, for managing to get the code on a colour ringed Knot that was in the Teifi Estuary for a few weeks earlier in the year. 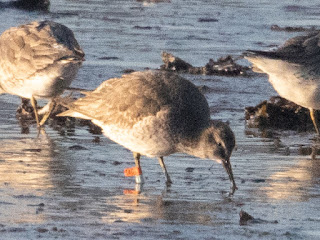 It had been ringed on the Dyfi Estuary at Ynyslas in September 2020 by Mid Wales RG, 130 days 64km.
Read "We're Knot flagging" on Mid Wales Ringers blog about the project and some of the resightings including one seen in Portugal.
This year sees two new colour ringing projects for the group.
Arfon has just started a Willow Tit RAS in the Tregaron area with the first birds colour ringed this weekend. 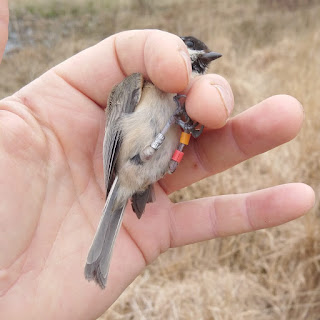 More on this from Arfon as the year progresses.
Andy's RAS on House Sparrows is showing how useful the numbered rings are in monitoring a species which are very net wary.  Just last week alone he recorded 23 males and 21 females visiting the feeders. 9 of the 44 were originally metal ringed from 2019 or earlier.
Last month we held our AGM by Zoom. The usual agenda business was conducted successfully through this new way of meeting for the Group. After a difficult year, particularly for our trainees, we made the simple target for the year -   To get back to sites as a priority then the plans and ideas will flow for the year.
With Wales "stay at home" restriction now changed to "stay local" last week we can once again start to ring at a few sites beyond our gardens.
(Wendy James and Rich D)
Posted by Richard Dobbins at 21:38