2020 was the trial year for the House Sparrow RAS in Bancyffordd, it proved successful and so the project was registered with the BTO. Colour ringing of individuals commenced during October that year. During 2021 the RAS has been completed between the dates of the 1st April until the 31st August and 117 adult birds were recorded. Over the same period 300 juveniles have been ringed for the second year in succession. Well over 450 birds have now been colour ringed but with only two years of data the project remains in its infancy.

Because of the ease with which colour ringed individuals can be identified, it is not surprising that the number of adult birds recorded this year has been greater than the total for 2020. Sighting data suggest that there have been at least 60 pairs that have had either single or multiple breeding attempts throughout the summer. During this period, some adult birds have seemingly disappeared from the population but many known juveniles from 2020 have bred for the first time. Leading up to 2020, there was no focussed effort to ring House Sparrows in our garden and so annual totals varied considerably. the age structure of the adults seen during 2021 is as follows:

All free flying nest box chicks have been colour ringed when trapped during 2021 and it is planned to continue to do this in future years which should mean that the 32 known age birds seen this year should increase substantially in 2022. All being well, it should be possible to start looking at how many of the 3JJ birds (most likely to have been from a nest in the village) remain in the village to continue the village colony.

In August, two of the colour ringed birds have been photographed in gardens in Ceredigion, one in Llandysul (2.8km) and the other in Adpar (11.0km). Both birds were from the 2021 breeding season. It is most likely that the birds were from the Bancyffordd breeding colony, but this is not proven. If one assumes that late summer/autumn dispersal from the colony occurs, then it is also fair to assume that birds are recruited into the Bancyffordd population from external sources. It seems to be clear that individuals of all ages fly freely within the colony but at what distance this ‘freedom’ is curtailed is not obvious as adult birds from a satellite colony seem somewhat reluctant to travel the short distance of 280m from their nesting area to the centre of the village. 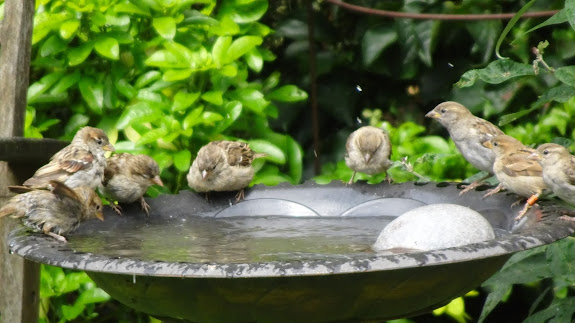 A group of juvenile sparrows drinking from a bowl in an Adpar garden, S65 on the right hand side. S78 feeding with other birds (not shown) in a Llandysul garden.

This year I have noticed a lack pale feathering in juvenile birds and the near absence of random white feathers in adult birds. Many of the juveniles have had growth bars which isn’t too surprising given the periods of poor weather during the breeding season. Often juvenile birds have been host to the relatively large flat fly O.avicularia. Even though some birds have multiple flies, I have not noticed any apparent ill health (e.g., low mass, reduced pectoral muscle) as a result their infestation. More recently I have noticed large ticks on some birds; these seem to be more of a concern to the welfare of the birds as several of the hosts appear to be in poor condition.

Another topic I have spent some time looking at is the shape of secondary feathers. As moult progresses, it becomes increasingly challenging to age some birds, especially females. The following couple of photographs may be of use to those interested. 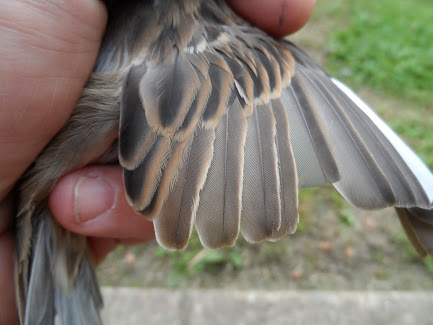 This bird is an adult female undergoing complete moult. One of the primary feathers has been replaced with a white feather. Four old secondaries remain and, if the condition is reasonable, I think these can be used to help age female House Sparrows later in the moult cycle (see next photo). 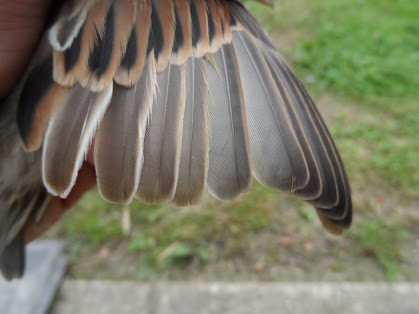 The next few months will be spent trying to catch some of the numerous individuals (both adults with and without metal rings and young) that have avoided my bests efforts to date, many of these will end up as birds of no specific age.