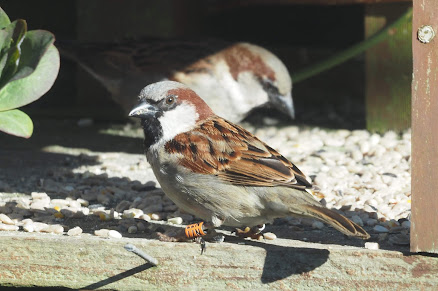 I noticed the first juv. House Sparrows in the garden on the 27th of April and by the 2nd of May the first ones were carrying colour rings. The number of colour ringed juveniles has now reached 25 but the focus still remains on adult birds.

Comparing adult numbers in 2022 with (2021-entire season): new birds 19 (22), subsequent encounters 96 (100). The total number of new birds metal ringed in 2020 was 475 and in 2021 was 426 so the total of new 'adult' birds ringed during RAS is proportionately quite low in both of the subsequent years. In my mind there is no doubt that some of the un-ringed adult birds are of local origin and are individuals that have simply avoided being caught. I suspect that there is some 'infilling' from other areas over the late summer through to early autumn and perhaps early winter period but this is hard to prove at present as no other site is ringed locally.