All of these birds have been to Africa between ringing and re-encounter at the Teifi Marshes this May. We would still like to get more re encounters from Ireland, to support our thoughts on the origins of a high proportion of our passage birds.
Of the 25 Reed Warblers caught by May 14th, 13 had been ringed by us in previous years, the oldest was ringed in 2016. A good start to our RAS project.
House Sparrows, more from Andy soon but his first 3JJ of the season was caught and ringed on the 2nd May.
This male Linnet was caught at Mallard Pond in a reed bed net. We don't ring many on the Teifi Marshes. Chris has now visited and whoosh netted successfully at a new site along the north Pembs coast. We hope this will develop into a RAS, though maybe not as productive as our previous Linnet RAS site at Mwnt. (Edit by Chris 17/5/22: 64 new birds and 1 recapture in 4 visits starting 21/4/22).
Whose feet are these?? 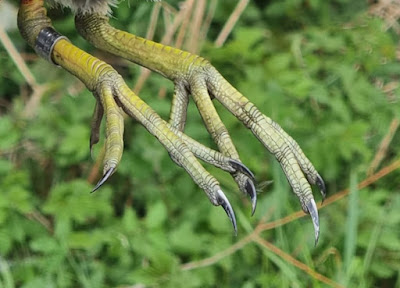 ... a Moorhen caught on the Teifi Marshes at the end of a Sedge Warbler passage morning.
With the main passage of Sedge Warblers and White Wagtails over, our migration monitoring with the Mallard Pond reed bed nets has now finished for the Spring.
Rich D and Wendy J
Posted by Richard Dobbins at 21:41