We now ring Ringed Plovers above the knee - see latest Ringers News. No help to read in the field or by digiscoped photograph !
We also learnt yesterday whilst ringing Curlew on the Severn (see below for our adventure)...that we were to put the rings on upside down. On the leg, wear is greatest on the lower part of the ring, the number being more important than the address, so upside down they are. Again no help to field readers.

So on to toes and lack of webbing.

Only 2 Ringed Plovers caught tonight, (3 more on 30th Sept) with checking webbing rather topical at the moment...... ! 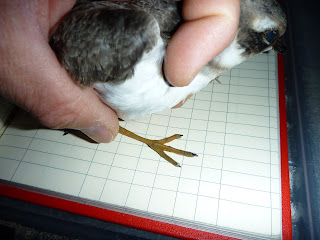 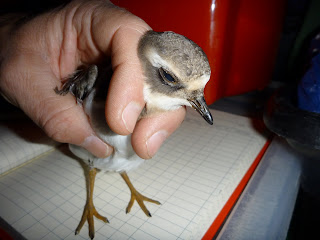 Posted by Richard Dobbins at 23:21 No comments: 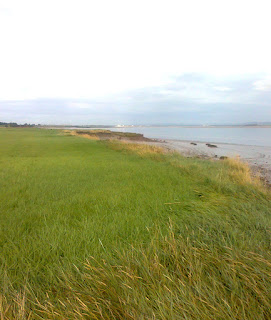 A change from the Teifi!
A couple of us went over to the Severn Estuary to help catch some Curlew for a colour ringing project.
We had travelled up the day before to help set up the cannon net at this site. Being my first experience at this method of catching it proved to be a worthwhile and educational few hours. Thanks to all the team.
Have a look at the Cardiff Ringers blog, cardiffringers.blogspot.com. for some nice pictures and description of our morning. 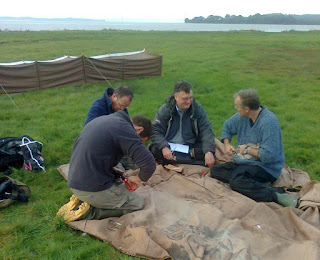 A ringing trip away has to include some birding too so we tried to find the Spotted sandpiper at Lydney without success but better luck at Goldcliff lagoons, Newport on the way home where the American Golden Plover flew over calling. Also 8 Ruff, 3 Spotted Redshank, 2 Greenshank, 4 Avocet and a Yellow Wagtail.
Posted by Wendy James at 20:05 No comments:

A brief respite from the wind...

A window of opportunity was forecast so the nets at Mallard were open at dawn. Now that the acro passage seems to have slowed down or even finished, we have cut down to just 2 X 60 foot nets in the (very wet, thigh deep in places) reed bed and a couple of 2 shelf nets around the pond edge.
Some movement overhead was promising including Snipe and Skylarks. 13 new Reed Buntings and 2 retraps including one that we had not seen since June 2010 was good. A retrap Cetti's Warbler too was welcome as our numbers of these this year is well down.
But look what turned up next! - 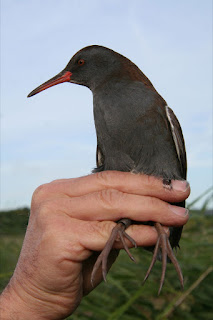 Our first Water rail at Mallard. The only previous one was Aug 2009 at our CES site. This first winter female wandered into the 2 shelf net while I was extracting a Blue Tit from the other end!
The other highlight of the morning was a male Migrant Hawker in the net. 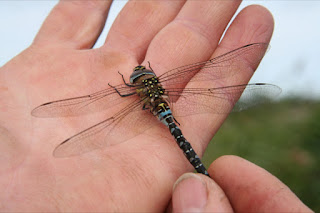 (Photos Dawn)
And then the wind stopped play yet again.....
Posted by Wendy James at 16:45 No comments: 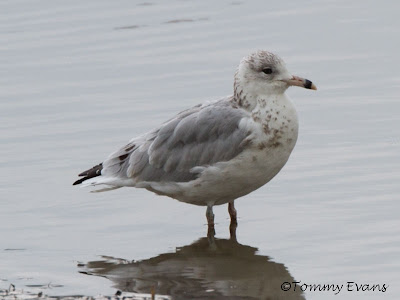 Not in the hand.........does come to bread !! The Cardigan 2 year Ring-billed Gull
Some 2nd year plumage features showing well on this photo.
Meanwhile in the Mallard Run, a few Reed Buntings, Pied Wagtails, and a Swallow this evening....
some late acros in the morning ..........?
Posted by Richard Dobbins at 21:09 No comments: 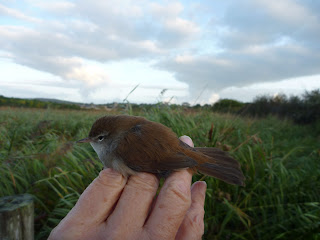 This isn't a Sedge Warbler, a bit more important, a new Cetti's today, they seem a bit thin on the ground this year? 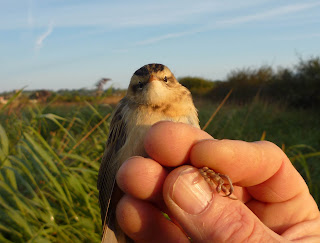 This little fat chap ! I retrapped 07:30 yesterday morning - 15 September.
He was ringed as a juvenile on the 13th August in the Mallard Run, by our guest at the time Richard Charles, with a fat score of 0, and a weight of 10.2g.
Yesterday (15/9), he had a fat score of 6.5 and a weight of 16.2g....and felt fat too!!
I must check, but it is rare for us to catch birds putting fat down whilst with us, we are very much a site for passage migrants, not a place for major refuelling........Was our recent poor weather the cause of his delay to move on?
Posted by Richard Dobbins at 09:22 No comments:

The day started with removing 3 x 60' nets from The Mallard Run..between the downpours etc.. The acro. numbers are diminishing....but 4 Sedge Warblers by 8am were a delight including a fat 6... weight 15.0g. 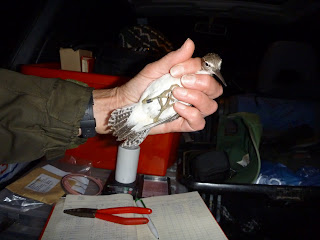 High tide nearly perfect for Patch..but the cloud went,and the moon shone bright !!
A few Dunlins, and 2 Common Sandpipers were a nice catch.
Posted by Richard Dobbins at 23:35 No comments:

Mallard mud -- but no Aquatic !

We, well I, ... (Wendy currently ringing and working on Skokholm !)
....... had been enthused by the ringing on Saturday of an Aquatic in S. Devon...
Yesterday, Sunday morning back in the mud, and with 14 new Sedge Warblers, quite happy. This figure a new daily September high for us here. Also 3 new Reed Warblers.

Then over to Towyn, our small site in the scrub near the mouth of the estuary.
3 visits over the past week, small numbers of Chiffchaffs, Blackcaps and a couple of Common Whitethroats & Goldcrests the highlights so far........!

Posted by Richard Dobbins at 15:43 No comments:

Relatives on the beach

Juvenile Dunlins and Ringed Plovers are our usual catch, and 5 of each species tonight.
Tonight's other waders were more of a hand full ! 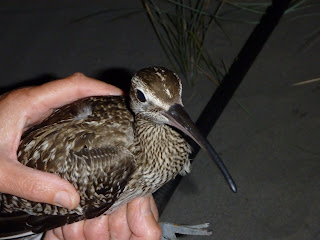 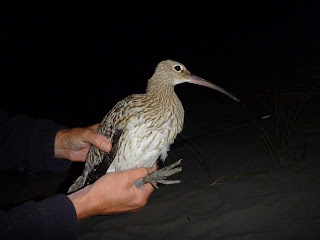 Posted by Richard Dobbins at 02:27 No comments:

We had successfully attracted and caught stormies with our "old sound system"...
Wendy's brother, Mike had been tasked to upgrade our largest sound system.
Not put off by the much delayed arrival due to events in Japan, we set up at Strumble with the newly arrived "Megamouth" last night. -- pictured with the lights of the Fishguard /Rosslare ferry in the background !! 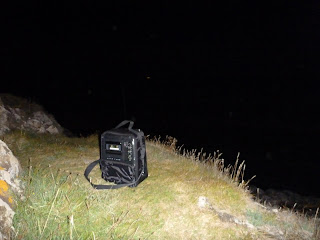 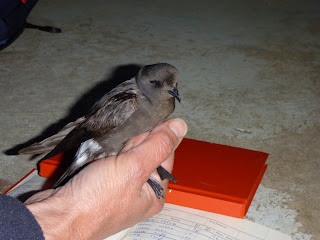 Posted by Richard Dobbins at 01:09 No comments: