A second "summering faithful " Storm Petrel was controlled on Sunday night - 27th July, this time near Aberystwyth by Tony Cross.
We ringed this bird on the 22nd July 2012 at our Mwnt site.....c36 miles to the south along the coast.

Site faithful summer visitors.........with no known breeding along the coast.....??  Or....??
Bardsey and the Pembs islands are the nearest known breeding sites.

We tried at a new site for us last night, Ceibwr, a site between Strumble Head and Mwnt - no birds caught or seen.

Posted by Richard Dobbins at 13:01 No comments:

A good day for Reed Warblers again on the Teifi Marsh with 41 caught out of a total of 88 birds. Juveniles for the whole reserve are now up to 122 so far this breeding season. 54 adults ringed in previous years have been retrapped this year. In a county that had no breeding Reed Warblers until the '70's  this is excellent news.

Always nice to catch a Kingfisher as this is species is the logo of our group. 33 have been ringed on the reserve since 2008. 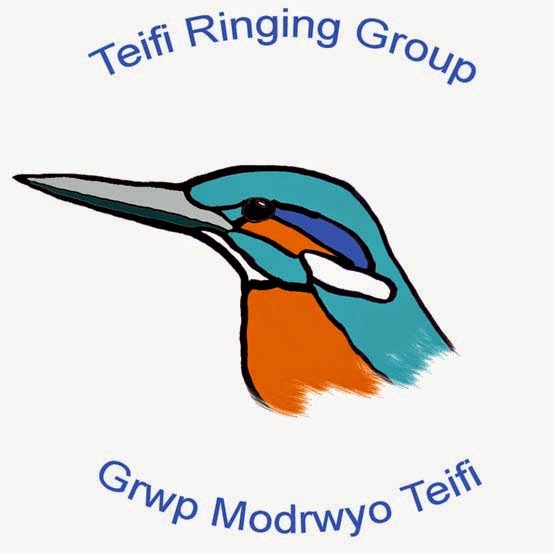 A good opportunity to revise the aging and sexing... 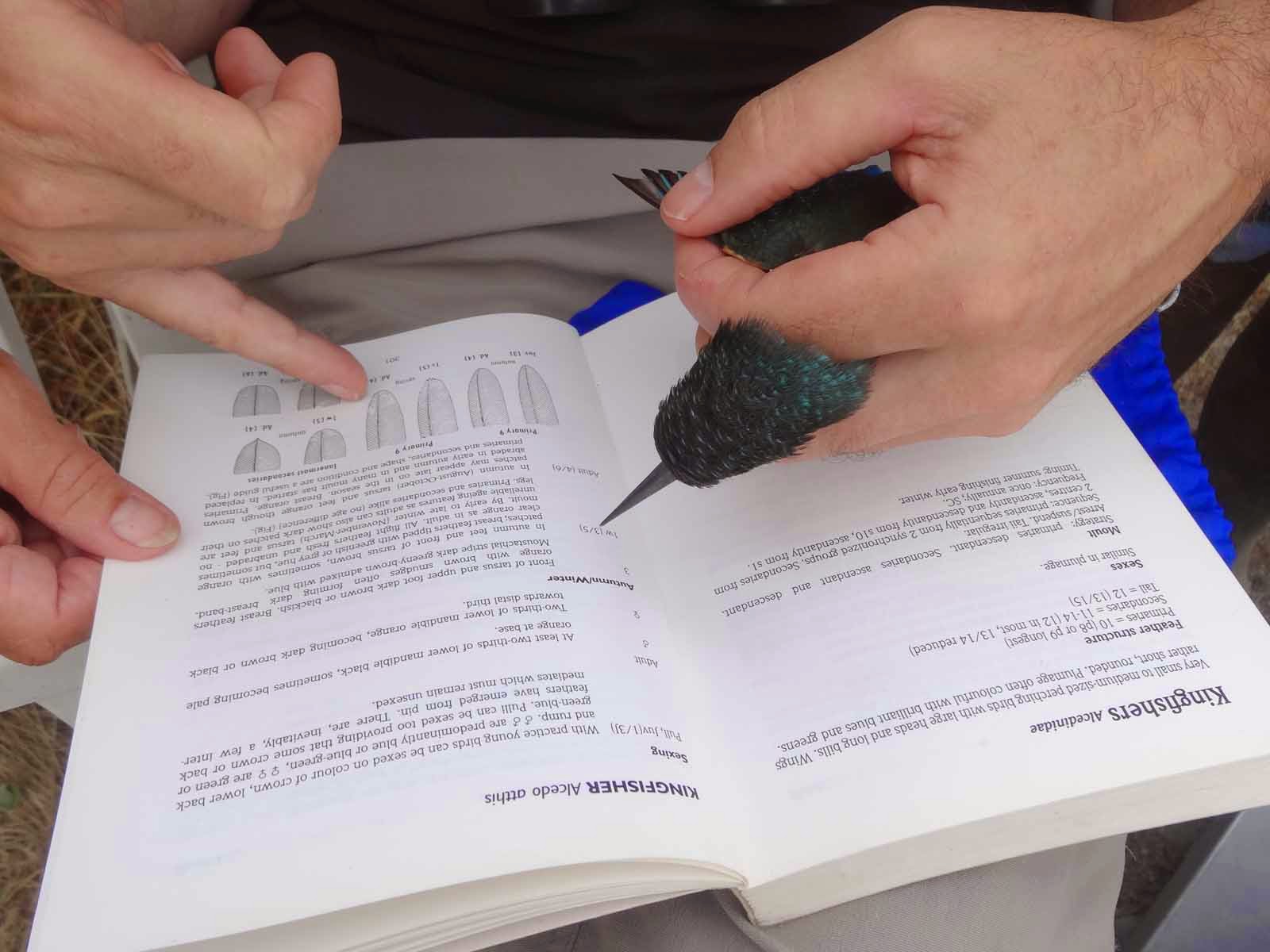 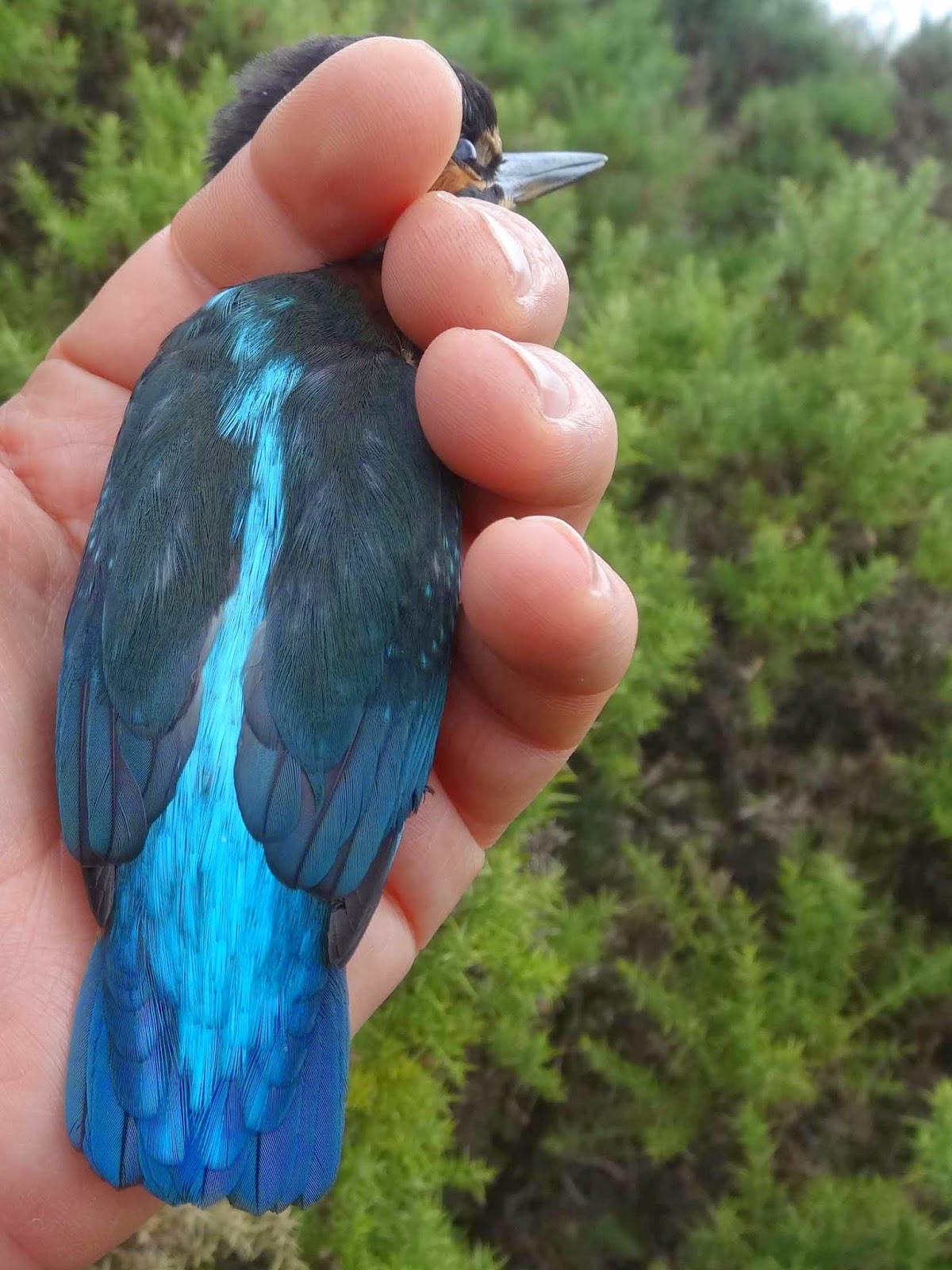 
All the Tit species and Chaffinches were down or absent compared to previous years. Plenty in all of our gardens though, particularly abundant are juvenile Great Tits and Chaffinches.

Nice to catch the first juvenile Lesser Whitethroat of the year; one of two caught this session, the other a breeding female. 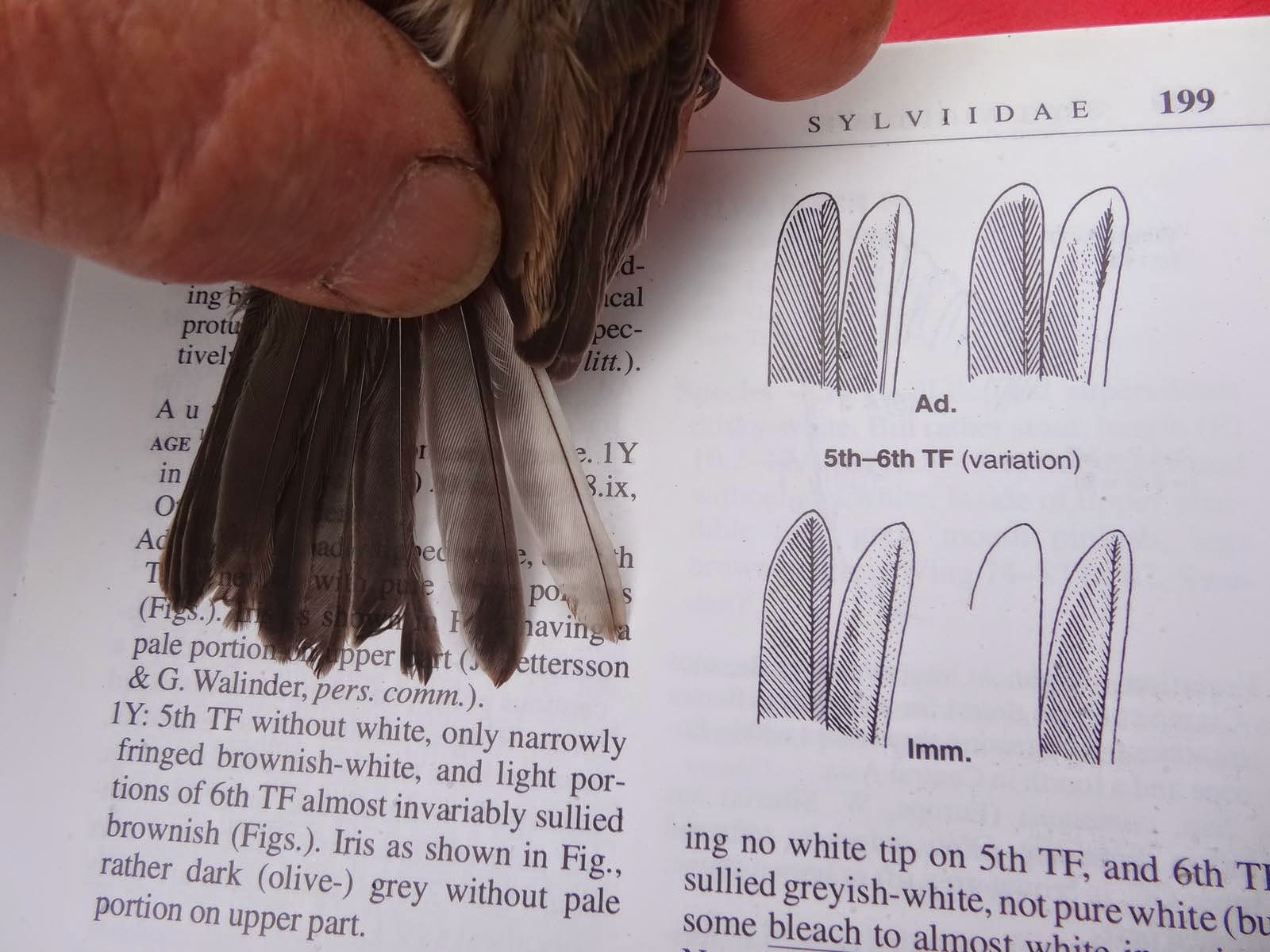 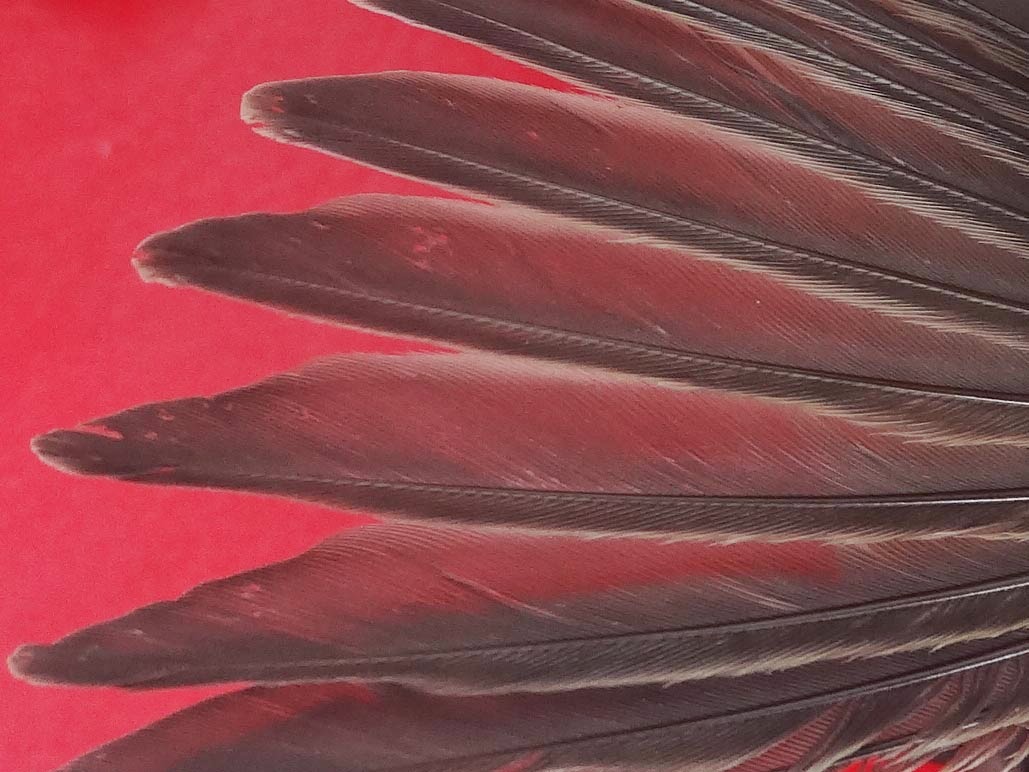 More juveniles than usual appear to have feather mite damage, due to a drier season? 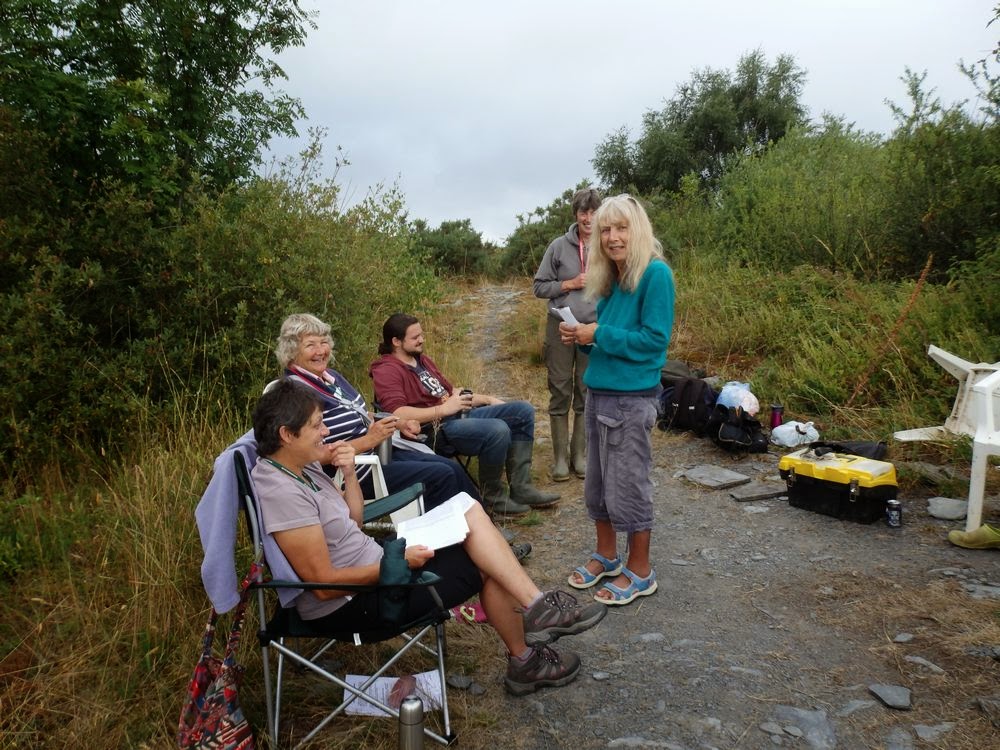 Happy girls and Ryan at CES 8, all looking very relaxed...

Posted by Richard Dobbins at 23:08 No comments:

Mallard in the Mist - again and again

The Mallard Pool in the mist. 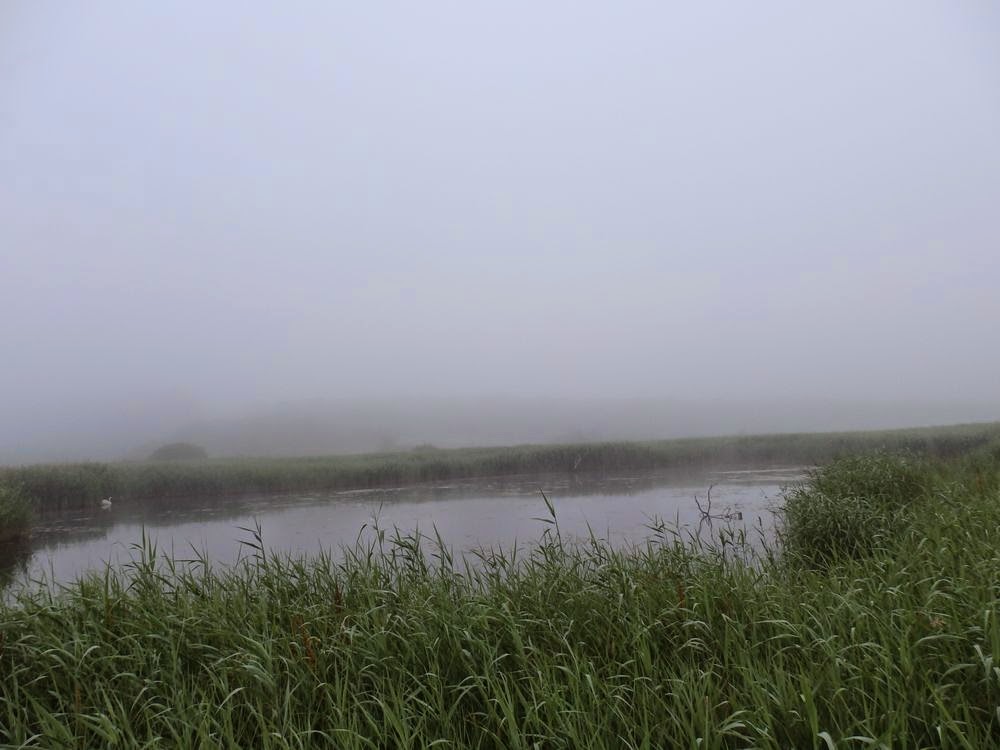 The picture taken about a week ago ....and a similar view this morning !
We have done a few sessions in the Mallard reed bed since that photo, with nice early acro. season success.
Retrappping adult Reed Warblers - for our RAS project. Also ringing the early juvenile Reed and Sedge Warblers before the passage birds arrive, and the first adult Sedge Warblers starting to move.

This morning Chris was catching at the Cuckoo and Pentwd nets, extensions to the original Mallard rides that he's been expanding since joining our group.
A great morning for acros !

The season is shaping up to be a good one after a quiet couple of years.

The sun does shine....
Here a view from the end of the "Charlie's" two shelf  ride looking across the Mallard Pond to the "Aquatic" ride - which has of course caught Aquatic Warbler ! (five have been ringed on the marsh) 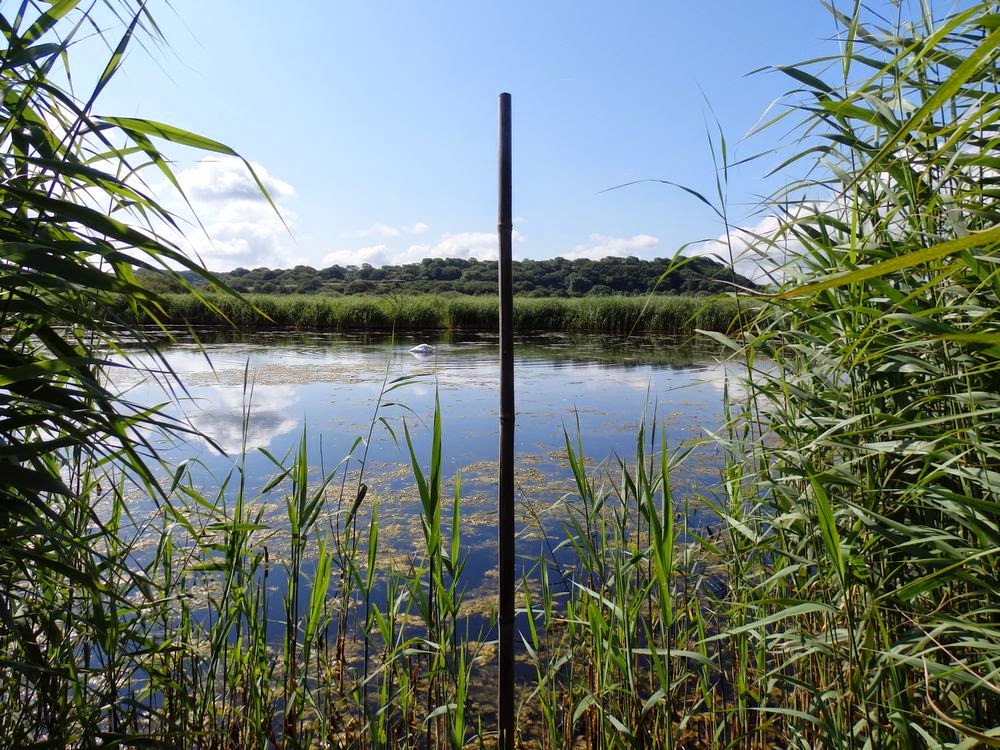 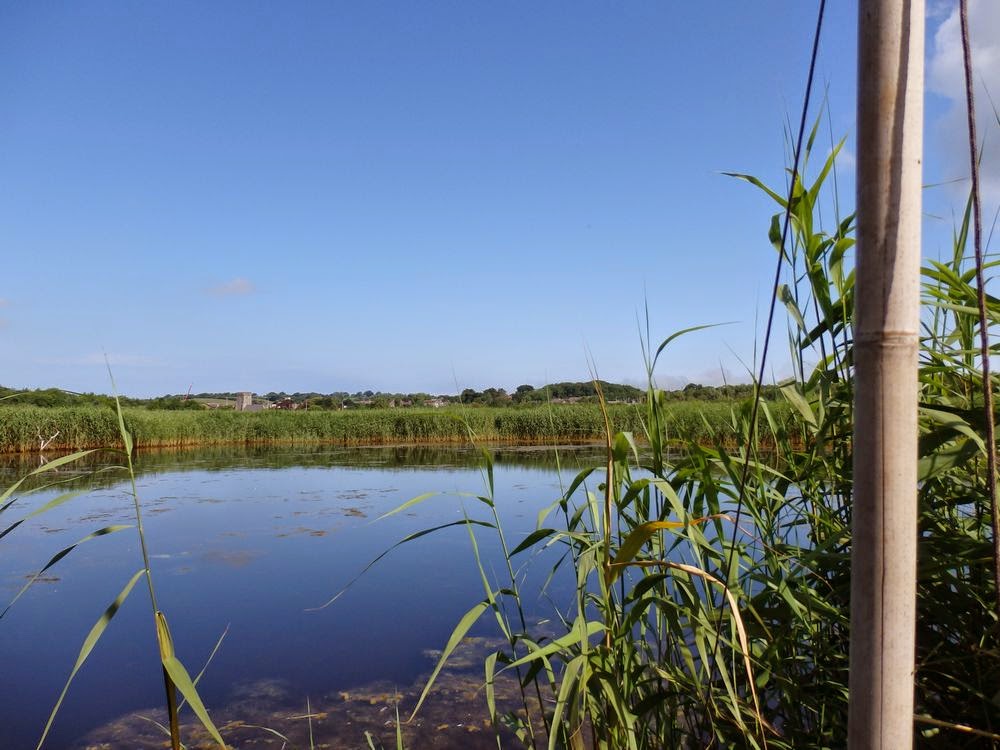 Posted by Richard Dobbins at 23:59 No comments:

Half our Group were missing today so we were delighted that Nia, Water Vole Officer for the Wildlife Trust could join us. Nia also specialises in finding breeding Storm Petrel's... on Ramsey for example.
Thus our mutual interest in stormies - see posts below 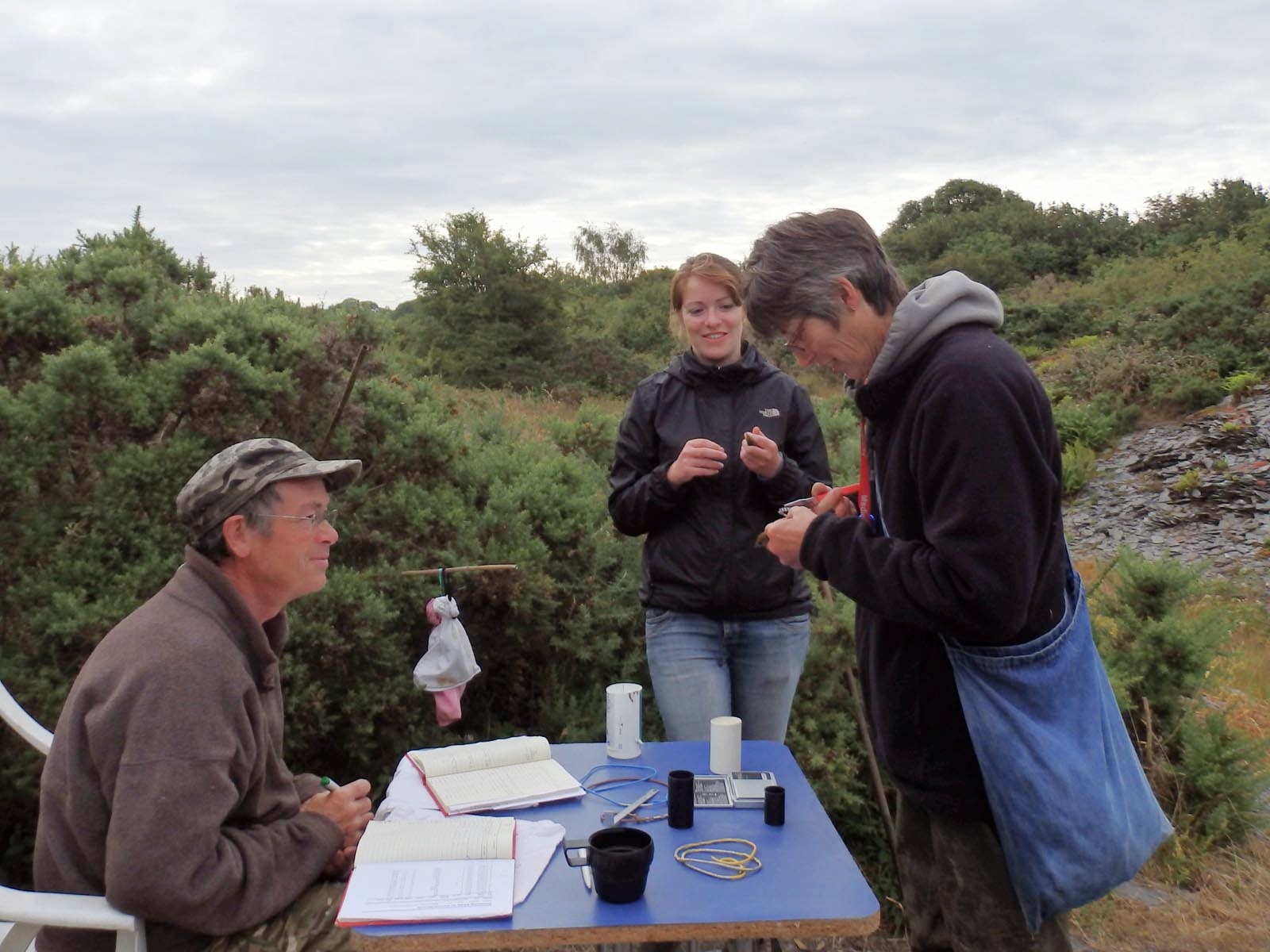 Chris scribing, Wendy and Nia ringing at our CES table amongst the slate waste scrub.
Of the 79 birds captured, Chiffs headed the numbers with 17 juveniles ringed. 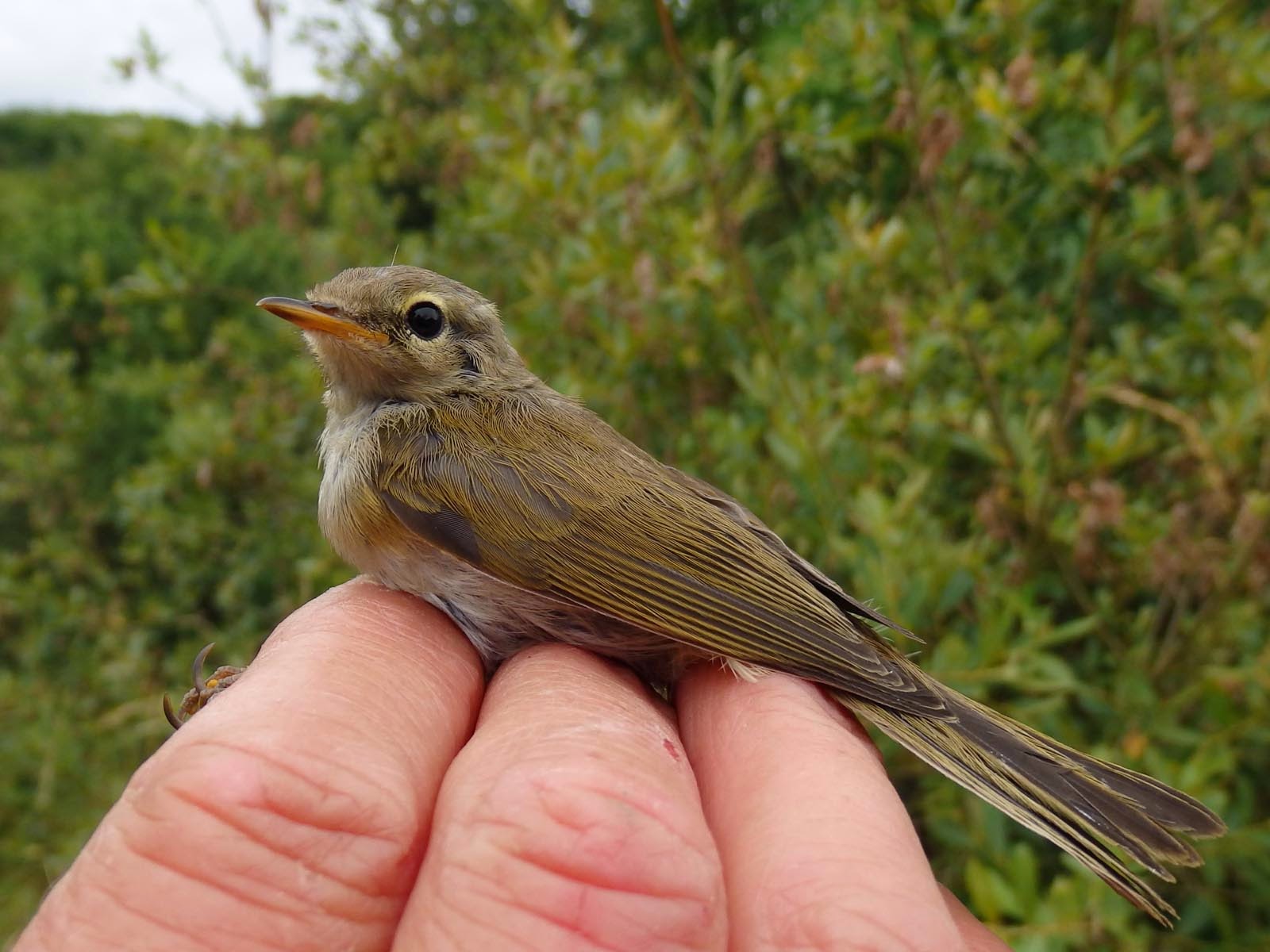 For the benefit of the group not present today, these were our totals for CES 7.

Posted by Richard Dobbins at 21:26 No comments:

Stormies - where ever next...? 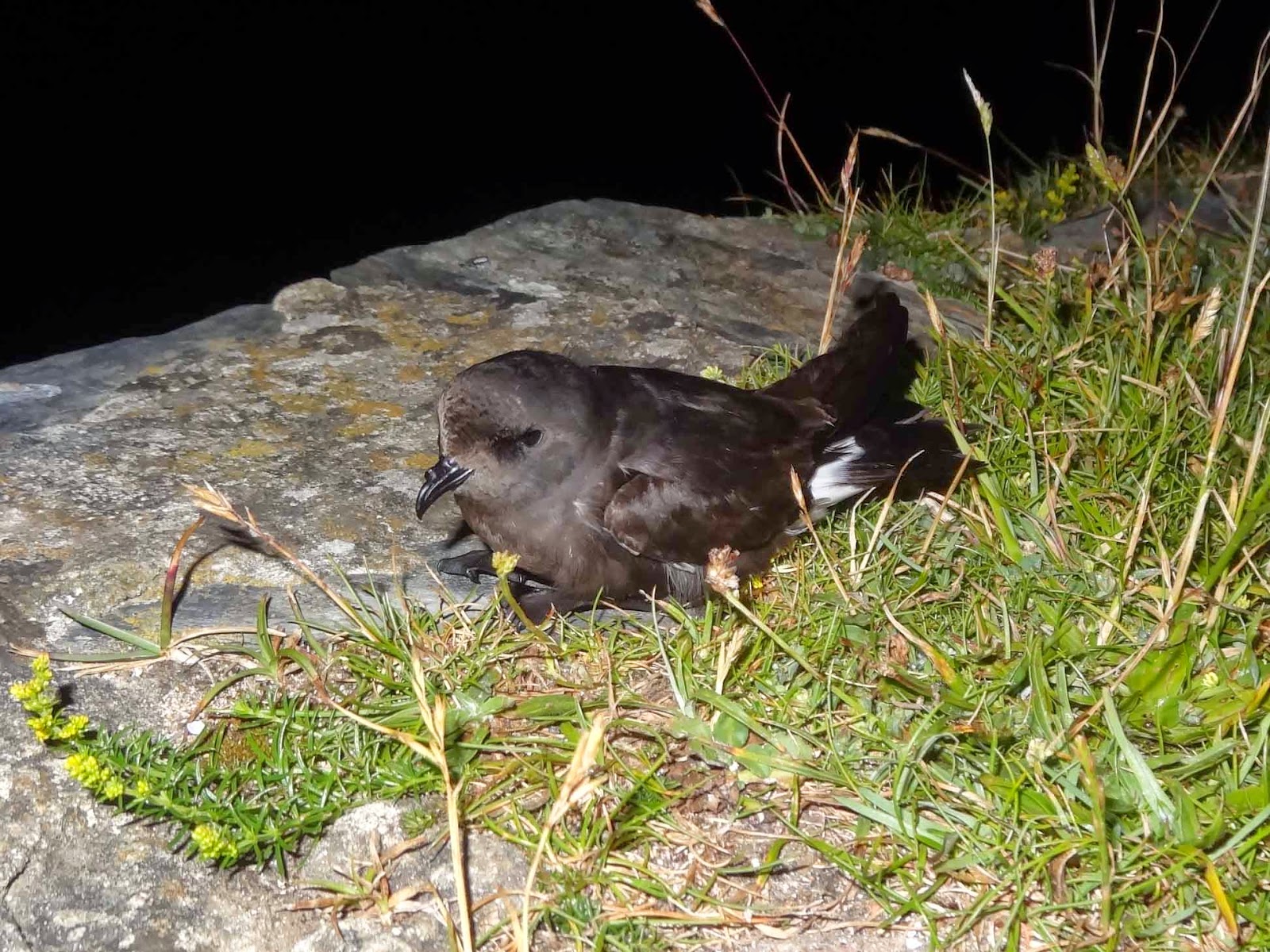 We abandoned our visit to our usual catching platform on the outer edge of the headland at Mwnt due to a un-predicted southwest wind. Instead we decided to set up near the lime kiln on the cliff to the south side of the beach. Two stormies were caught here, a location that we would describe as in the back of the bay.
Sheltered and almost inland compared to the headland out in front !! 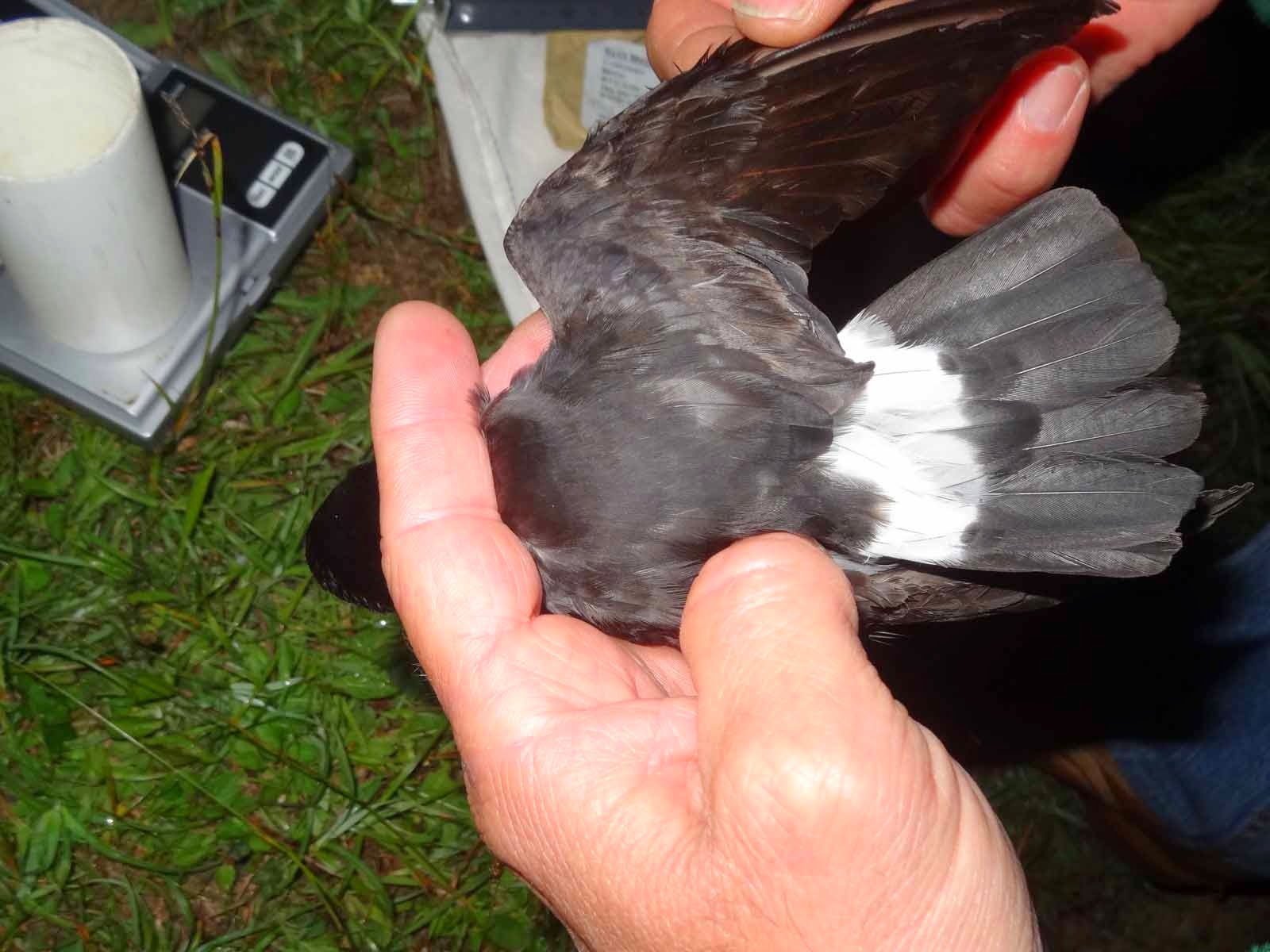 Across the border - ringing in Wilts

We were joined by Karen a C ringer from Teifi Ringing Group today and she ringed two new species (Tree Sparrow and Barn Owl) further increasing her experiences and getting to see the scale of our nest box projects. She also learnt a lot about nest recording and then we did some top work ringing Swallow chicks and catching the adults with specially sized nets across barn doors. I think her highlight of the day was seeing the flock of 40 Yellow Wags that we will be trying for on the next calm, overcast evening. 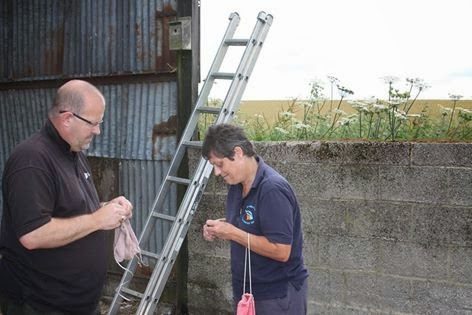 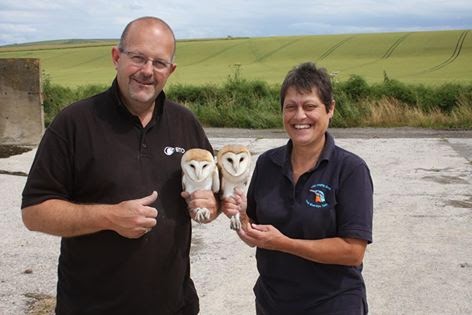 and Barn Owls...
Posted by Richard Dobbins at 06:30 No comments:

A small session in the Mallard net runs this morning produced the usual interesting reed-bed records.
Of the 15 Reed Warblers caught, eight were new juveniles. Amongst the six recaptured adults, surprisingly three of the birds the first recapture this year, and L598298 her first recapture(a breeding female) since being ringed here as a juvenile on 13th September 2010. We have now recaptured 36+ adults from previous years and 19+ new adults this season.
Only one adult Sedge Warbler caught, we won't see many adults after mid July...here a typically worn wing of the adult Sedge Warbler today.. 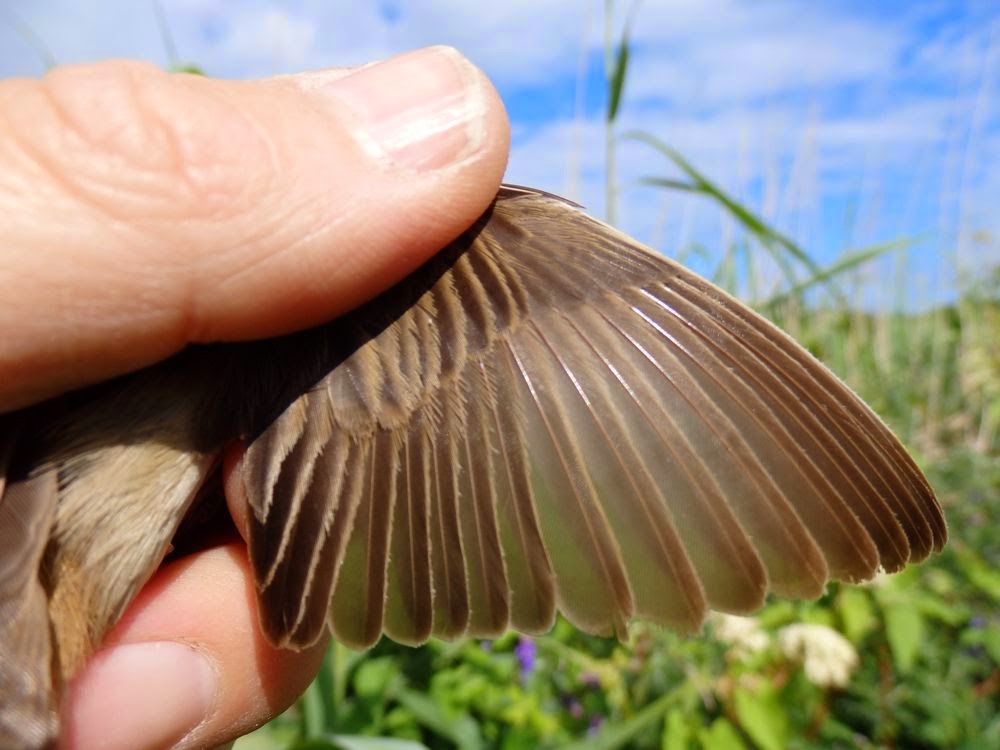 The large late summer passage is mainly juveniles, maybe we will find c10 adults amongst the c400 Sedge Warblers we plan for in August...and an Aquatic....or two...

Last night Chris, Wendy and I joined Steve and the Pembs RG  at Wooltack Point on the Dale peninsula to help them with a Storm Petrel catch. The point is close to islands with known stormie colonies so a good catch was to be expected - especially in the ideal conditions - no moon, no wind, and calm seas.
The first birds were caught before it was truly dark as soon as we'd got the nets up at around 23:00, and from then on we caught steadily with a team of ten including new trainees Kim and Stef, and also Molly Heal and Renate Thome just back from their positions as long-term volunteers on Skokholm Island.

Posted by Richard Dobbins at 08:59 No comments:

A Mwnt of Stormie Surprises.....

Just home from our third visit this year to catch Storm Petrels at Mwnt in Ceredigion.

00:40 net visit: - 5 Storm Petrels, a great start !
Two controls, two new birds and a retrap of ours, ringed at Mwnt but...on the 5th July 2013.
These are thought to be non-breeding birds, and with no known breeding birds closer than the Pembrokeshire islands or Bardsey...a particularly interesting recapture almost one year later !

A slow down in activity now, but our first Manx Shearwater in a Mwnt net wasn't really a surprise. On most visits they are flying around and behind the headland calling as they fly.
Three more new Stormies before the gulls started calling at 02:45....... a sign that dawn on it's way...
Posted by Richard Dobbins at 04:25 No comments: