The first Manx Shearwater ringed of the year and the first for the newly re-accredited Skokholm Bird Observatory.  Britain's first and oldest Bird Obs....and now its newest ! 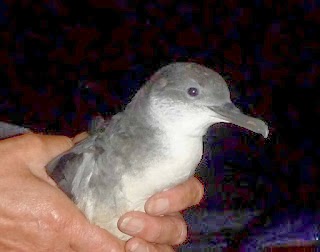 The manxie, one of five seen on Saturday night on my final day of a working visit. Manxies already calling loudly, and squawking as rivals fought over a burrow ! The first manxie casualties to gulls found already and being dyed purple - another piece of research is underway... 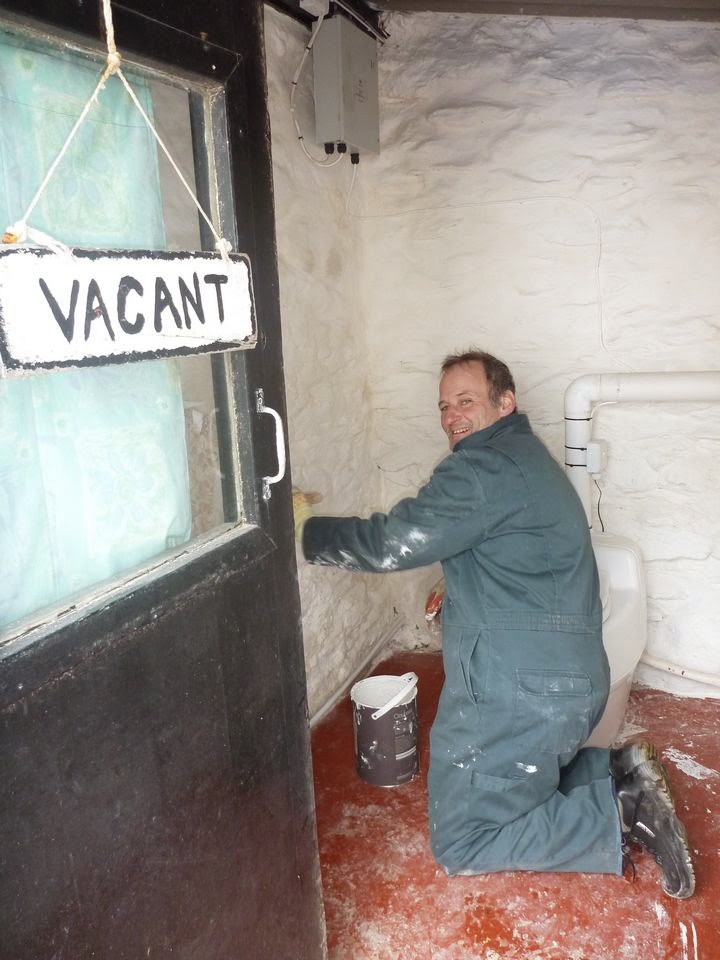 My main duty was decorating two of the three most exclusive rooms on the island - (no ideas girls at Long Point Bird Obs please) In the next couple of weeks this current window will be replaced with a new stained glass work of art by Linda and Rachel celebrating the island's history. Not all work of course. A female Chough was observed food begging to the male. Peregrines were standing near to nest sites when not flying across the rows of swimming auks, just hoping one would  choose to fly.... 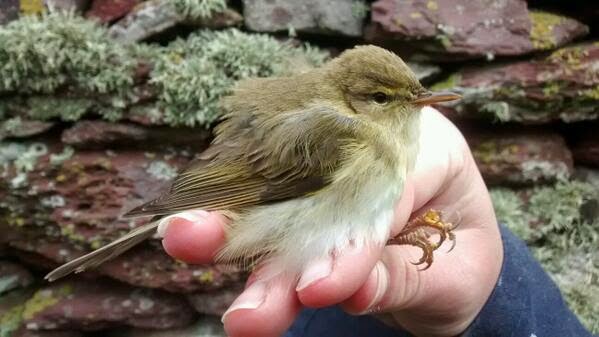 Migrants hardly poured in - but during the four days we recorded the first of year, for Collared Dove, Wood Pigeon, Moorhen as well as Willow Warblers (above), Blackcaps, Sand Martins
.....and of course Puffins..!
Chiffchaffs and Wheatears already having been caught and ringed in the previous days. Much more sure to come not only in the Spring but in the Autumn too.....
Take time to read the Skokholm Bird Obs Report for 2013.
Pages detailing the breeding success of seabirds, migration patterns and daily totals, complementing the photos and records of such warblers as Barred, Booted, Blyth's Reed, Greenish, Subalpine and Yellow-browed - all recorded and ringed on the island in 2013 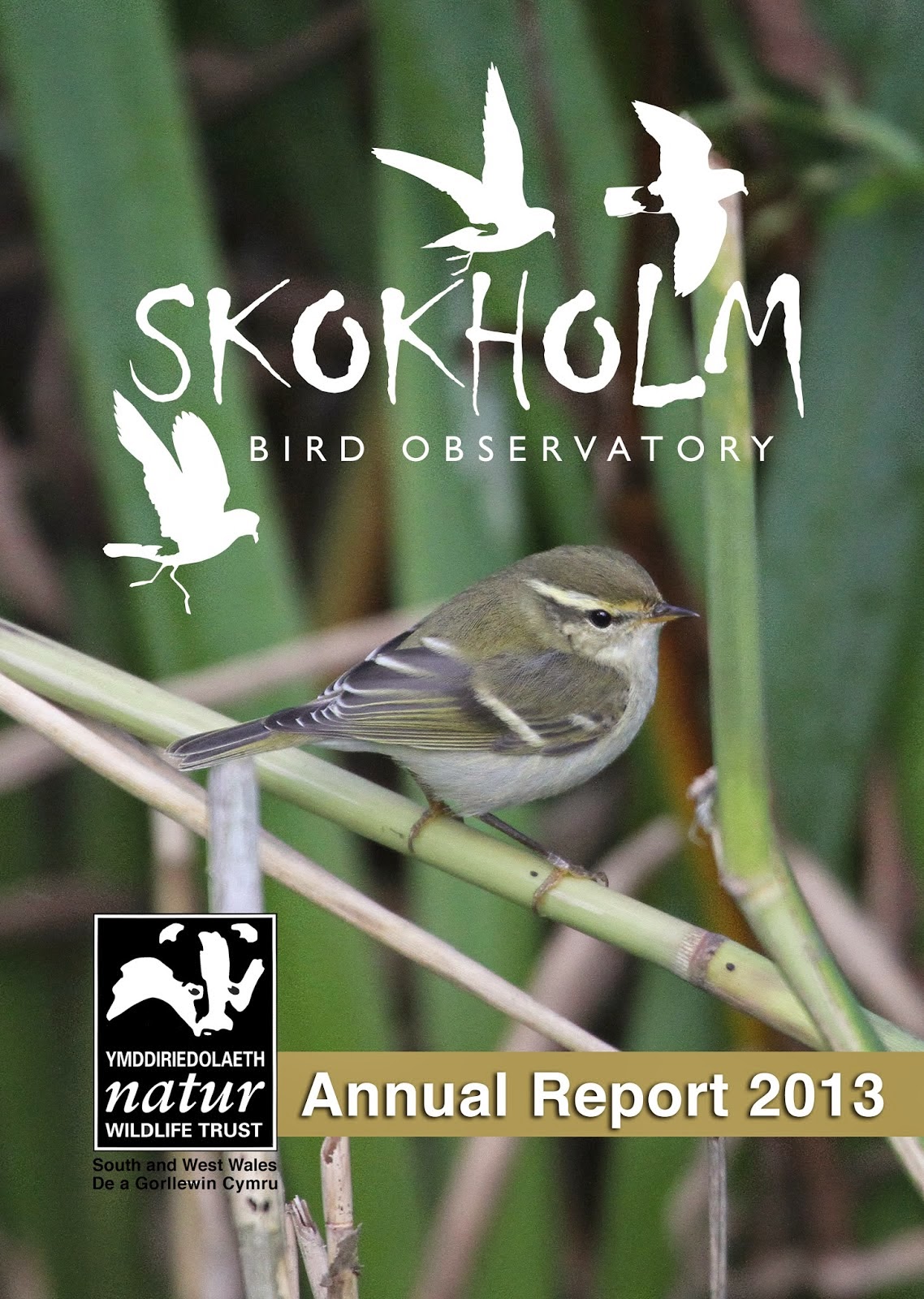 Back on the mainland by lunchtime, back to the Teifi Marsh for the evening.
About 40 Sand Martins recorded and c50 alba Wagtails. We managed to catch seven, 1 White and 6 Pied, though catches will increase as we enter April.. 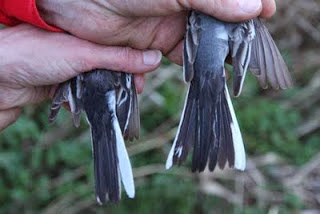 Above a photo from a catch in April 2011.
(photos Richard Brown, Skokholm Blog...or mine)

Posted by Richard Dobbins at 22:45 No comments:

From the Teifi to Spain, autumn migration

News from the BTO this afternoon about the movement of two of our Teifi Marsh birds that were caught in Northern Spain on their migration south. 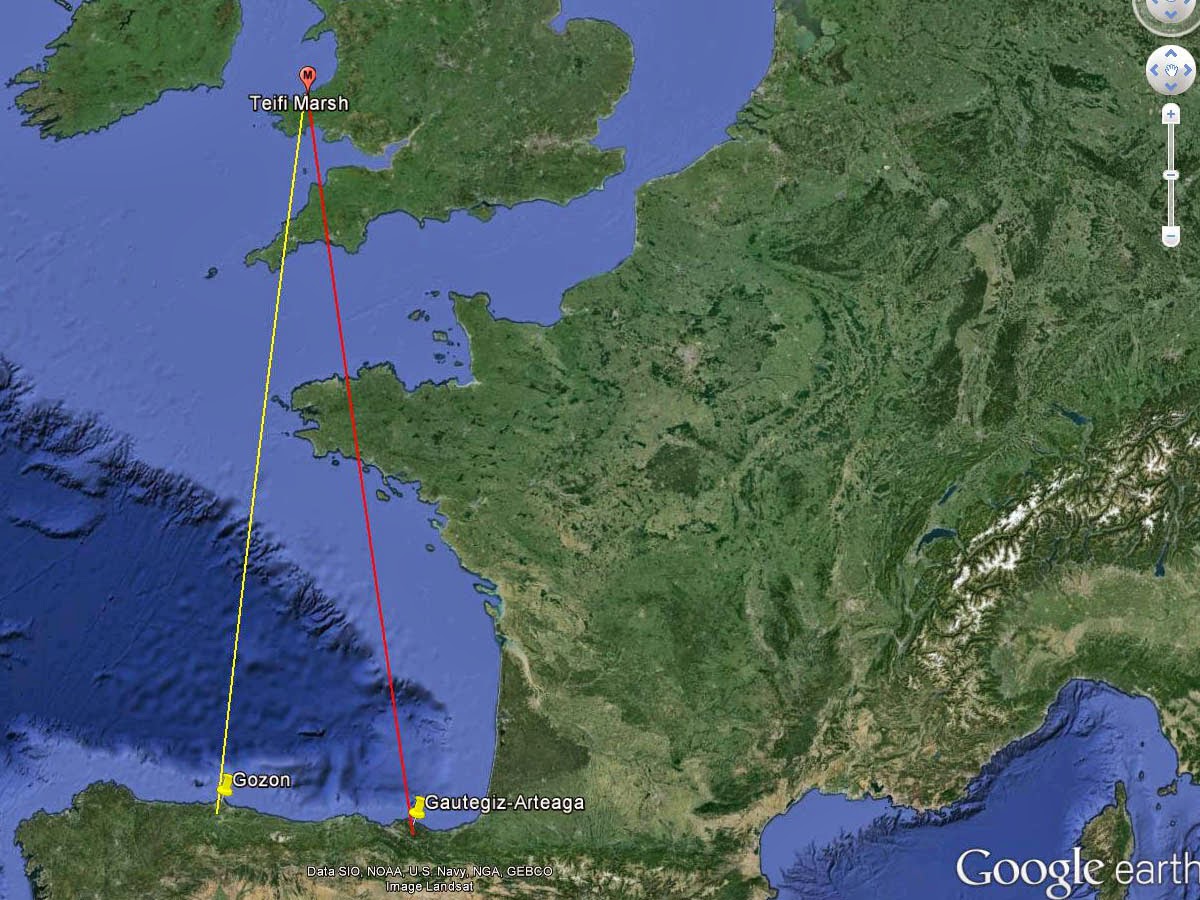 The lines on the map above show the direct route but we have had many recoveries of Reed and Sedge Warblers from Kent and Sussex and along the Loire Atlantique coast in France which fits with birds migrating overland rather than a long sea crossing. 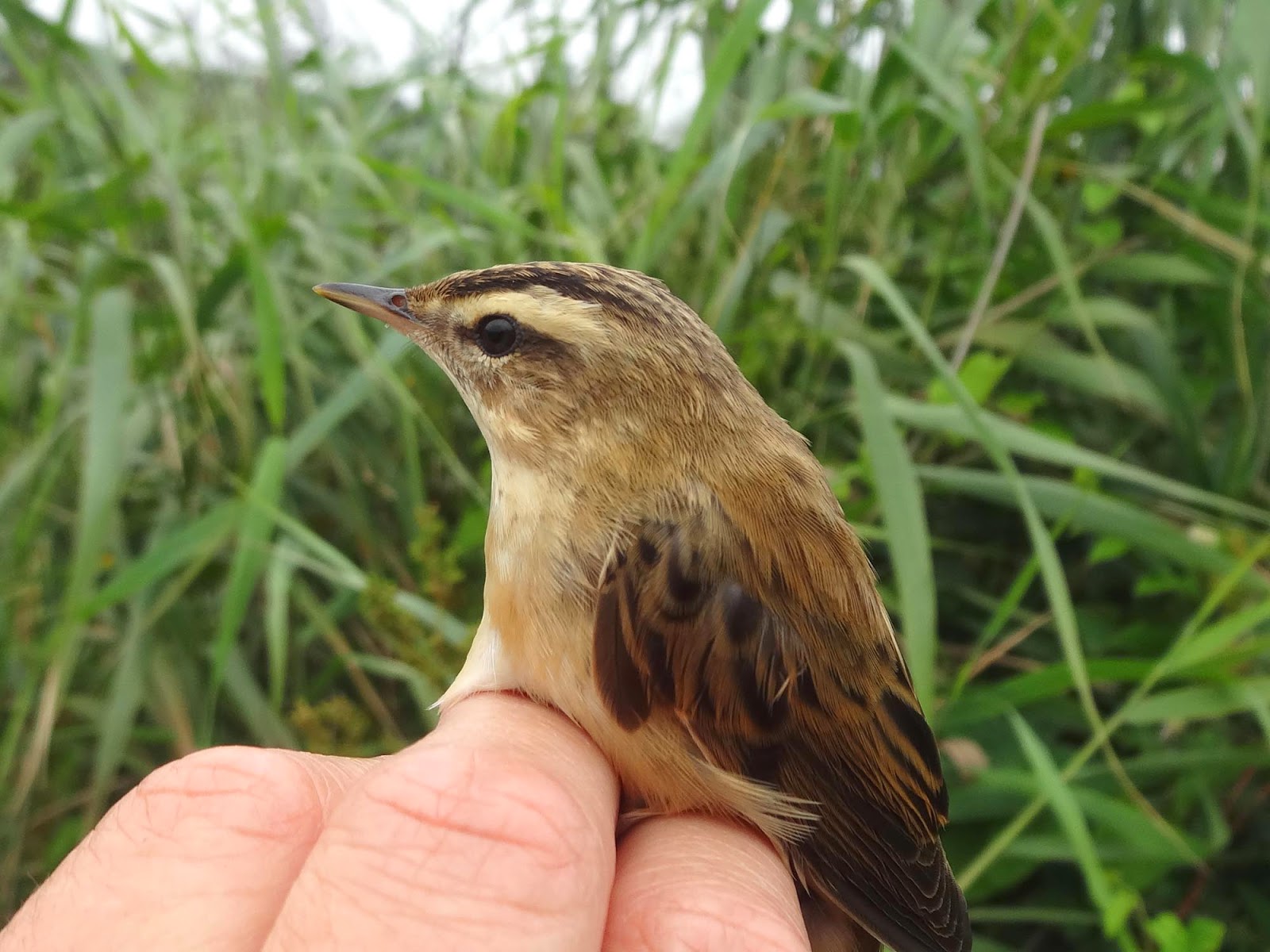 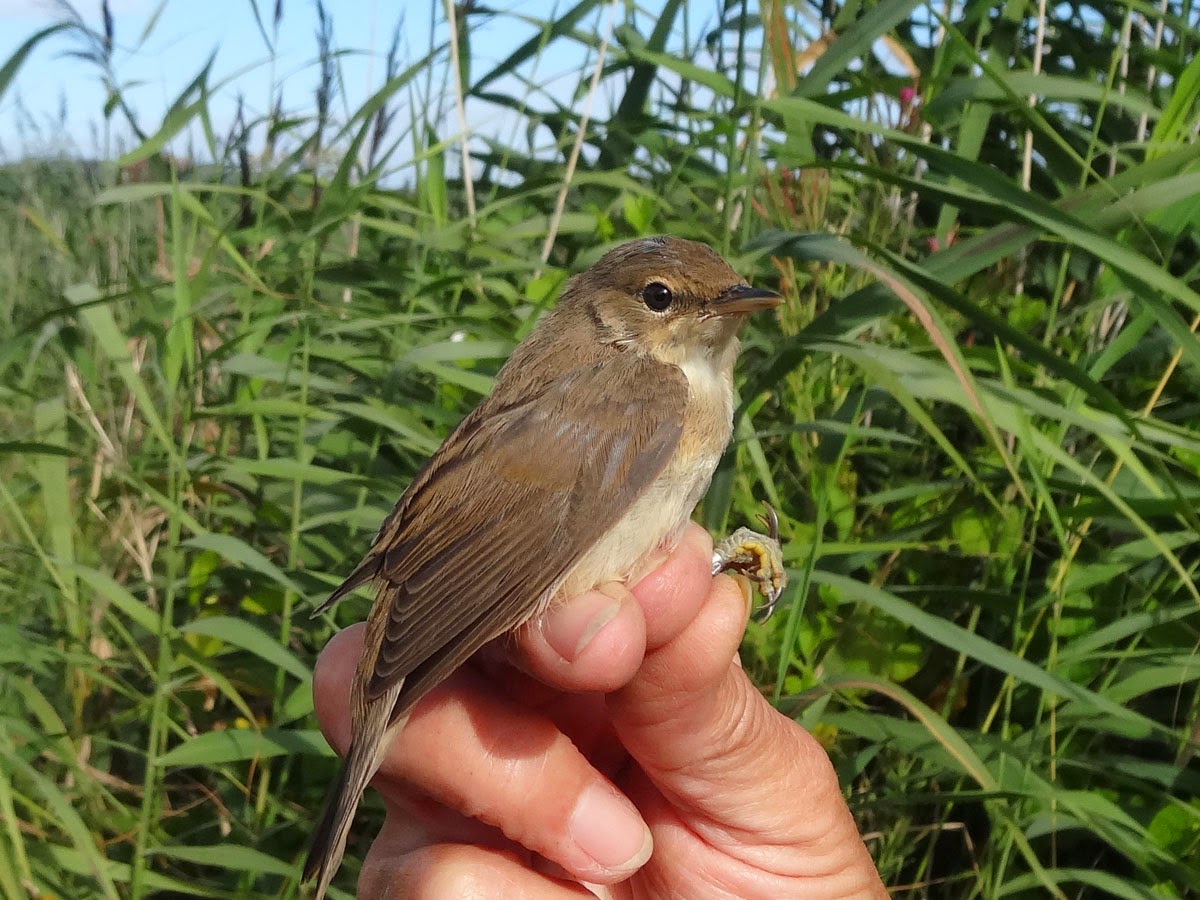 Reed Warbler
Posted by Wendy James at 20:22 No comments:

Last night out on a late season lamp for Woodcock - we caught 5 Meadow Pipits, that in itself a record and brought the total of Meadow Pipits ringed by the group up to 100. 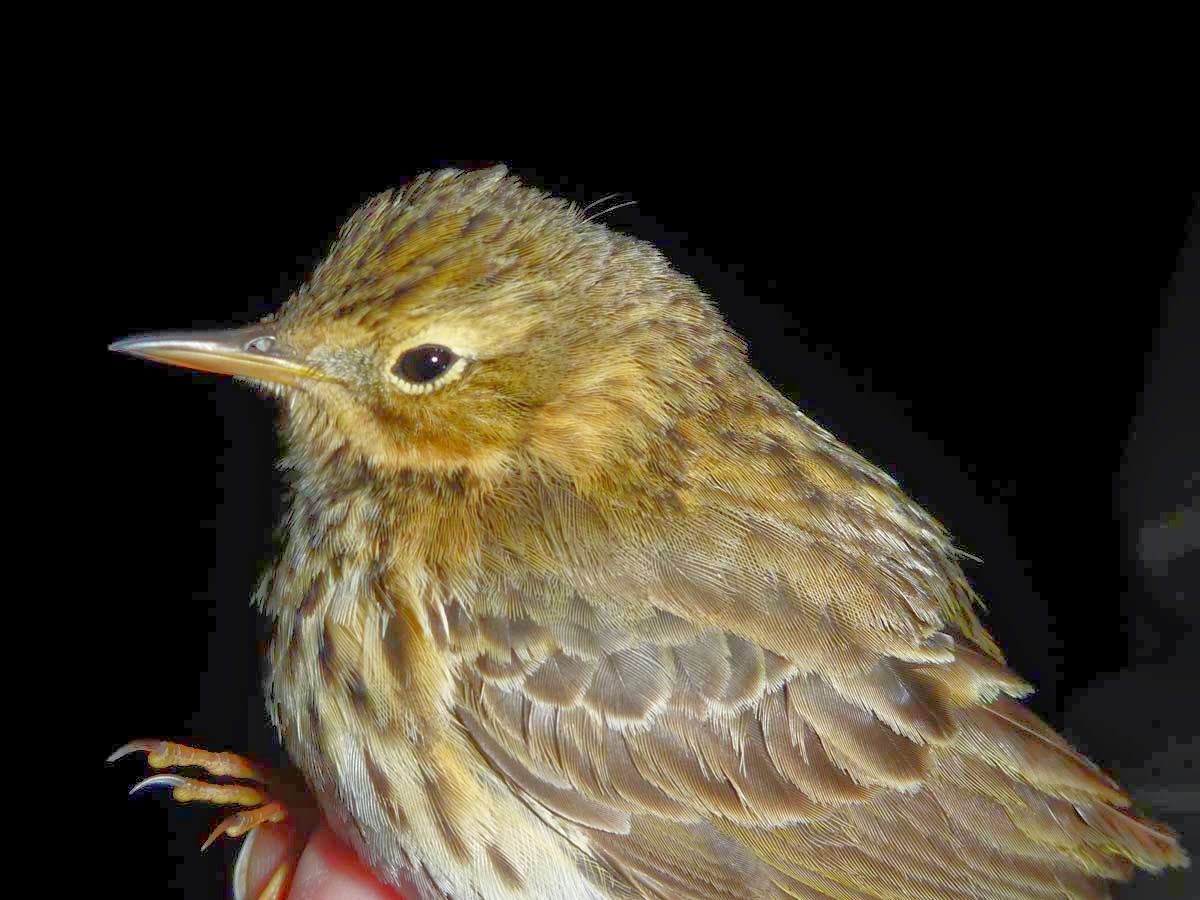 More surprising was that the first Pipit we caught -  a retrap ringed on Christmas Eve last year. We have never thought of these hilltop birds as anything other passage birds. Perhaps it is on return passage, as these hill tops are bleak.....
Below last night's GPS track, 5km walked and 336m ascended !! 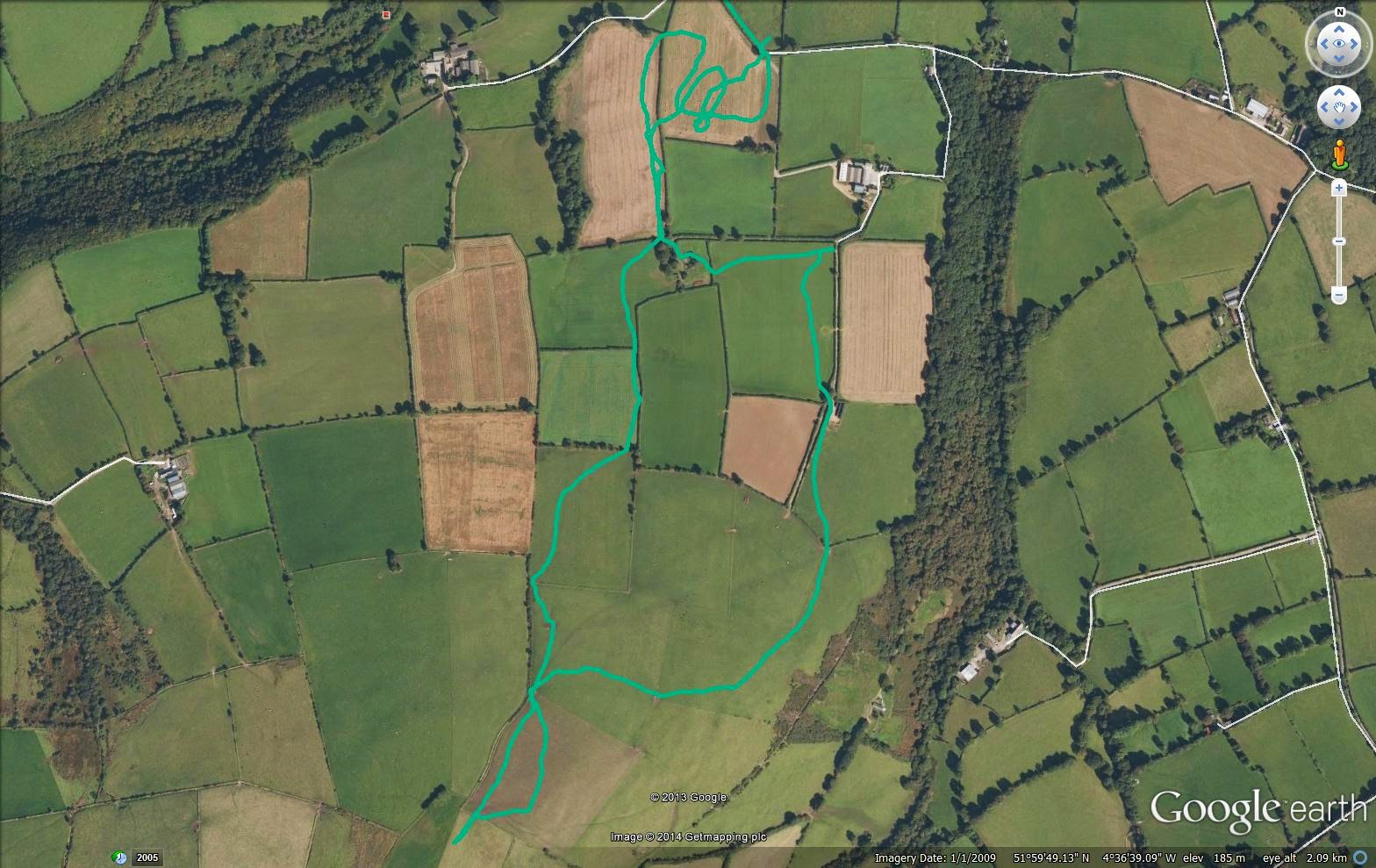 Elevation increases towards the bottom of the map. We did record one Woodcock and a few Golden Plover. The previous evening  over the hilltop on our Frenni site, no Woodcock but c40-50 Golden Plover seen, some with black underparts moulting through, and this bright well marked Fieldfare caught. 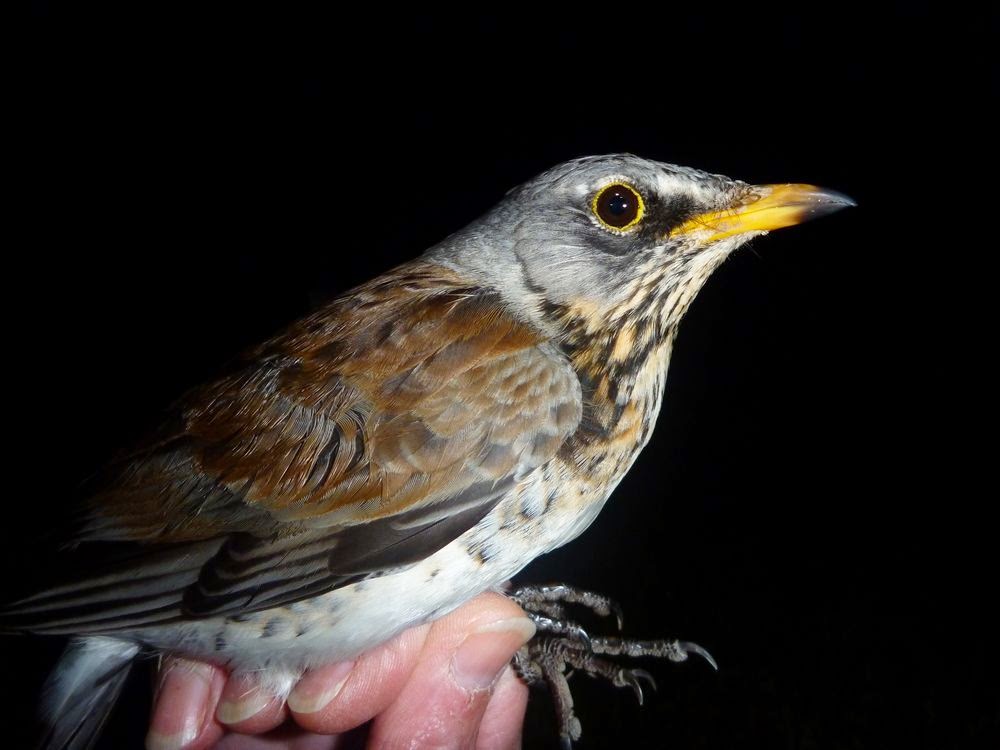 Back in the gardens, and we have caught 30 Siskin retraps from winter 2012/2013.....interesting. Even more so, the four Lesser Redpoll retraps in Wendy's garden that were part of what we thought was Lesser Redpoll passage  mid - November, when 23 were ringed on the Teifi Marsh, 1.8 kms away. 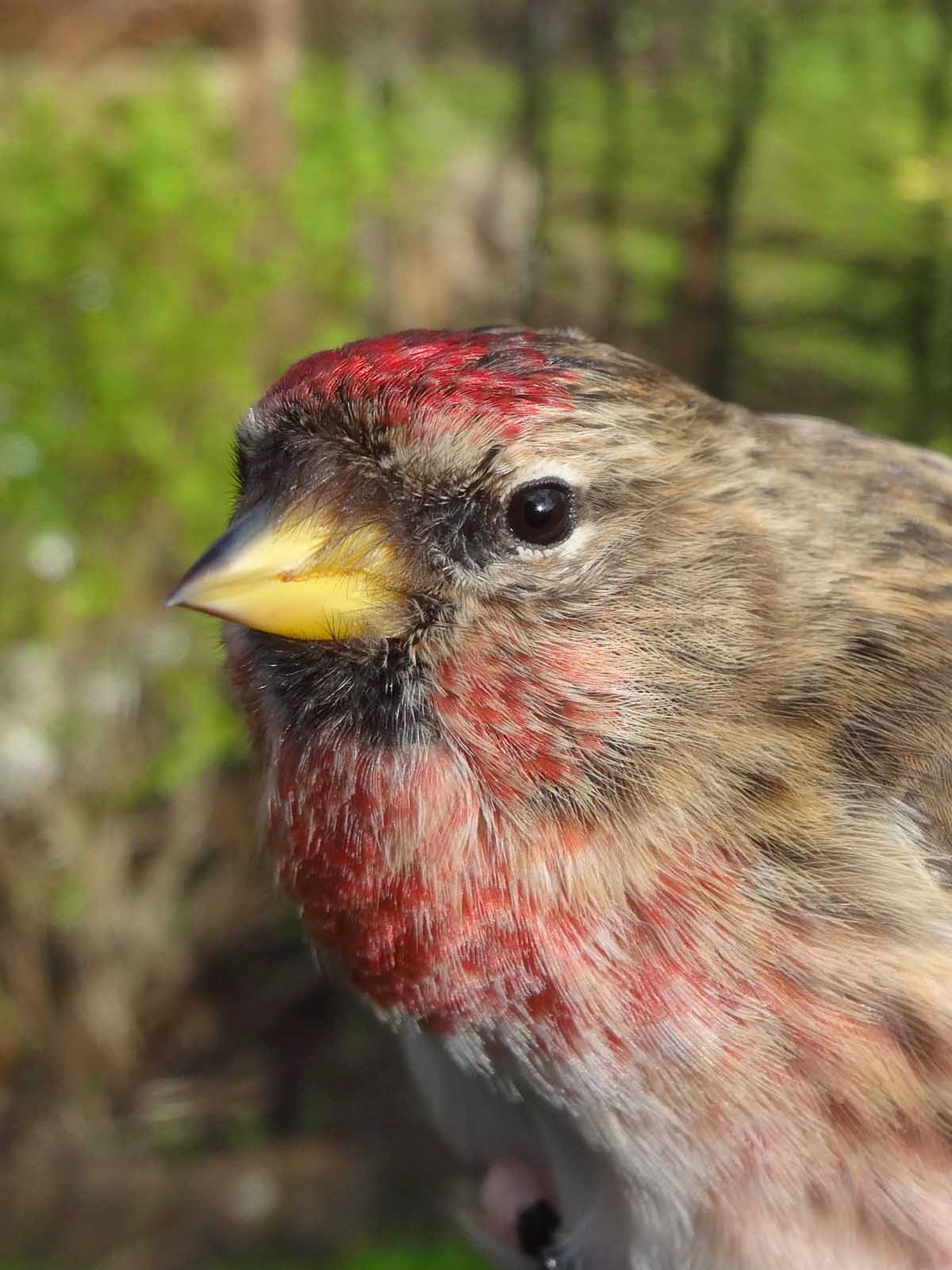 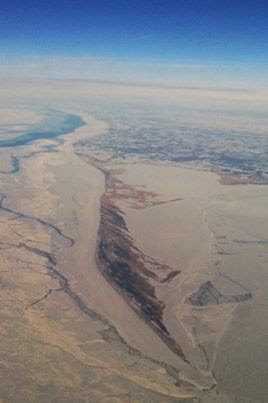 This is the Tip of the 30km spit that goes south into Lake Erie, still surrounded by ice!!
(Photo via Beverley McLeod)


Posted by Richard Dobbins at 19:20 No comments:

Chiffs, Redwings, and an Otter on the sea

As the breeze dropped this afternoon, we decided to try for an hour at dusk for wagtails. No wagtails came to roost in the reed-bed, but we did catch three Chiffchaff with pollen horns, a sign of nectar feeding in more southern climes. New arrivals for sure.
We were surprised  to find Redwings still coming to roost, this our best thrush roost site so great to catch a late five birds before they depart from West Wales.

Earlier today, after a final WeBS count of the Teifi, a visit to our coastal migration site at Mwnt.
No hirundines or Wheatears yet...just a likely passage Red Kite and 2 Chough. The real highlight was our first Otter for the site. Otter breed nearby on the River Teifi, and we  have recorded them on the nearby coast. The Otter was in and out the water and after a purposeful deep dive came out onto the rocks again with his catch, a  live fish to munch through.....

Much the same plan for tomorrow.

Posted by Richard Dobbins at 20:22 No comments:

The highlight of  the first session on the Teifi Marsh this year was a retrap Chiffchaff  first ringed as a juvenile in June last year. Maybe an over-wintering bird rather than a fresh migrant ??
Other birds today  included a female Blackbird - first ringed as an adult in August 2009..also retraps of  Wrens, Long-tailed Tits, Goldcrests, Blackbirds and Bullfinches. (Chris, Dawn, Karen) 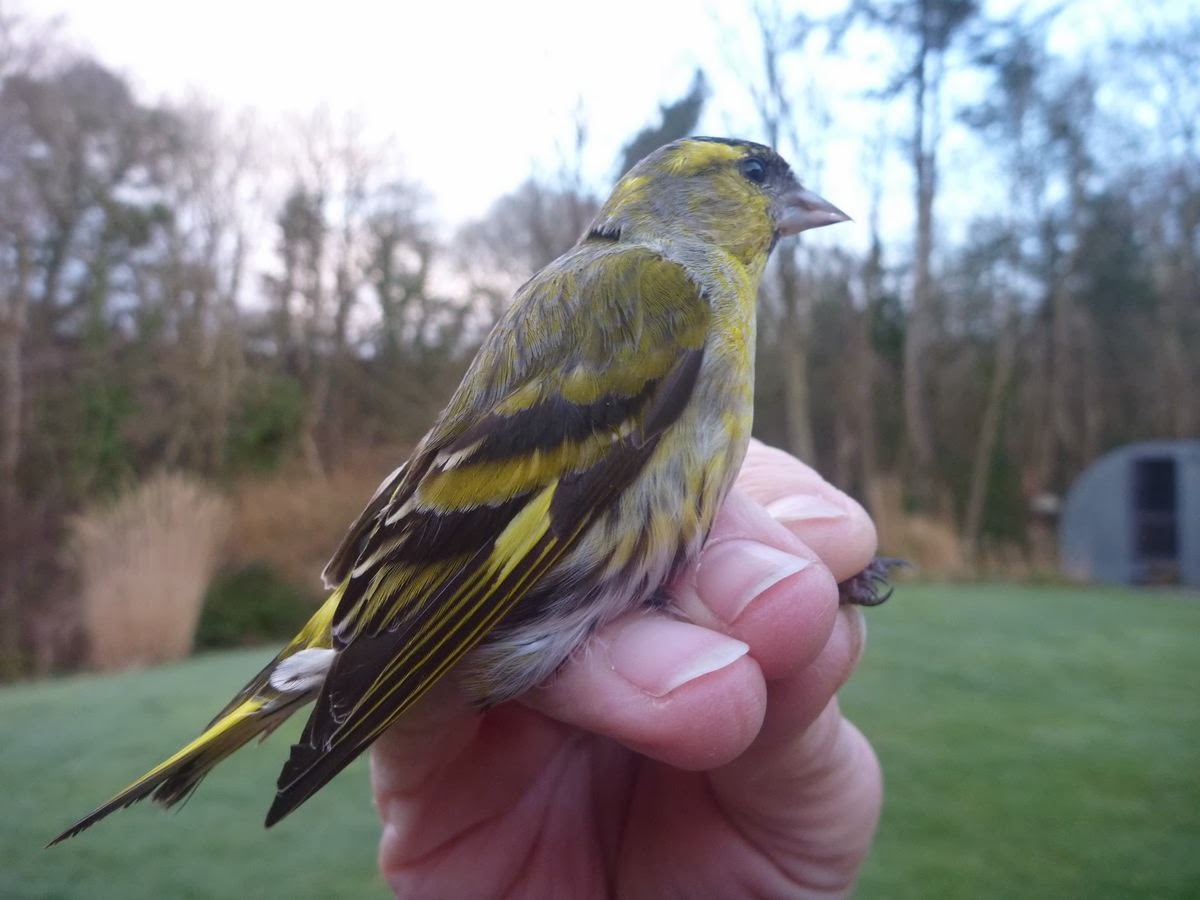 The male Siskin above, (age 5 - a juvenile last year)  was caught on March 1st, this is the first of the species for Dawn's feeding site. We have now ringed Siskins at four of our winter feeding locations, and have movements of  Siskins between three of them - the commonest movements are the 6km in either direction between Wendy's and my (Rich D) gardens.
Wintering site faithfulness is becoming interesting too, with 6 / 42 Siskins caught at Wendy's and 15 / 73 Siskins captured at mine in 2014, being birds first ringed during last winter- 2012/2013.

The numbers of Siskin recaptures will hopefully increase when Wendy returns from Thailand -
Exchanging viewing Pittas........for Siskins..... and Robins etc !!! 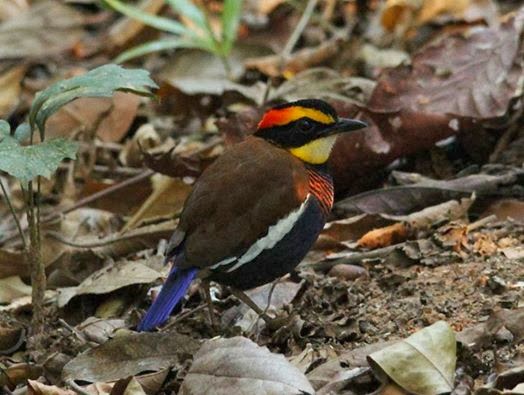 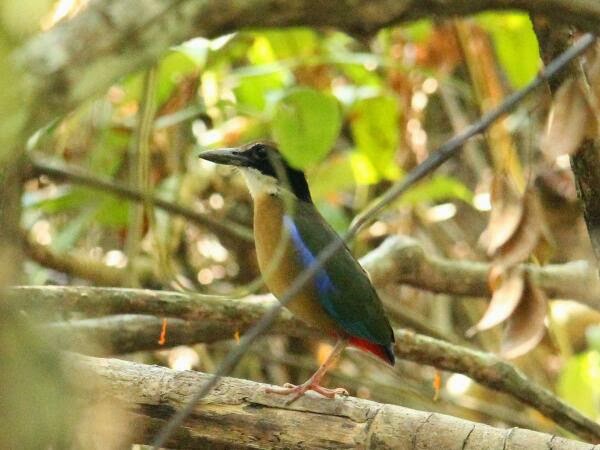 Posted by Richard Dobbins at 22:57 No comments: