Juvs and moulting adults in the reed bed

A couple of productive hours in the Mallard reed bed on the Teifi marsh this morning.
A total of 52 birds were caught, 41 new and 11 retrap. 30 of the new birds were acros - Sedge and Reed Warblers. The others were Reed Buntings apart from a couple of Wrens, a Whitethroat and a Blackbird.
The majority of the Sedge Warblers were juvs but also a few adults undergoing body moult after breeding. 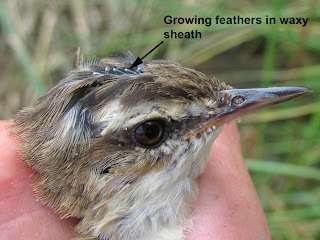 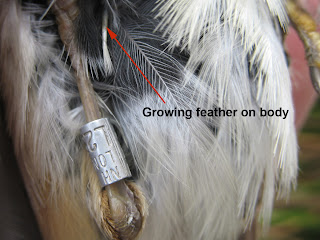 Until September we will be carrying out regular early morning ringing in the reed bed to monitor migration through it. This is part of continuing follow up to a paper written by the group in 2011 funded by a grant from the Welsh Ornithological Society.

A second juvenile Kingfisher in 24 hours...
(see post below) 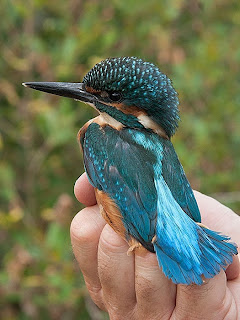 A new bird for Tommy and a great photo by Tommy.
Numbers from CES and other week-end activities later..
Posted by Richard Dobbins at 10:16 No comments: 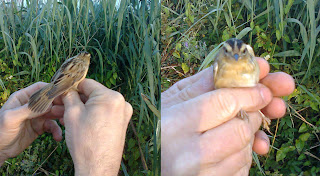 Last Friday, 19/07/13 we've opened the mist nets in our ringing station Donges-Est in the estuary of Loire (France). Already the 3rd day (21/07) we've captured our first Aquatic Warbler on migration! Looking forward to ringing the others AWs!
http://acrola.fr/camp_baguage.html
https://www.facebook.com/pages/ACROLA/195702077139259?ref=notif&notif_t=page_new_likes — with ACROLA. 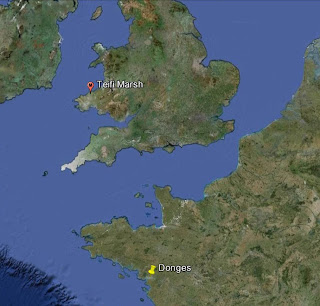 Weather permitting we are planning to follow the established protocols as in previous years and attempt to open Mallard net rides every day until mid September...

Posted by Richard Dobbins at 23:38 No comments:

Our first juvenile Kingfisher of the season in Mallard nets today..... 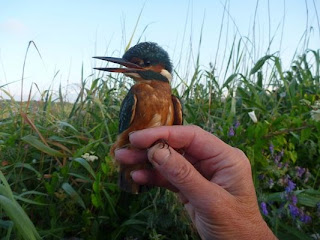 With Chris's initiative and effort we now have net rides on both sides of the River Piliau, and across it too.
This is the tidal watercourse running through the west edge of the reed-bed, the opposite side to the Teifi (east) and borders hedgerow and scrub............
Great to catch our first Kingfisher of the year, our 25th  Kingfisher ringed in the Group's five year history.
.........and nice a 3J Cetti's Warbler too. 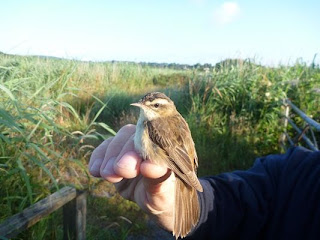 Pictured, an adult Sedge Warbler...the only adult of 11 Sedge caught today.
Also 6 new Reed Warblers and 9 new Reed Buntings..
.....MORE on acros including Aquatics in a new posting tomorrow....
Posted by Richard Dobbins at 22:53 No comments:

Mid July and numbers of juveniles being ringed on the Teifi marsh at our CES site is increasing as expected. A juvenile Willow Tit was the only surprise amongst the 31 young Dunnocks, Wrens, Reed and Sedge Warblers, Bullfinches, Reed Buntings, Robins,Chiffs, Blackcaps, Great, Long-tailed and Blue Tits. A total of 54 birds were caught of which 39 were new. The same session last year was similar with 29 of 44 new birds being juveniles.
With several pairs of hands around for this session we ran a moth trap overnight in the slate waste, scrubby area next to the reed bed. This used to be a regular event at our CES sessions and some excellent species have been recorded with the help of Tony Lewis and Janet. This week Karen was in charge. 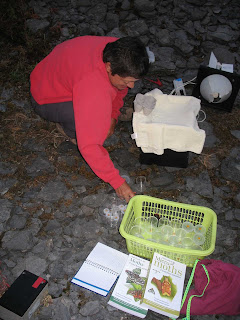 It was a cold clear night so the catch was small but some good species were caught including this Annulet. 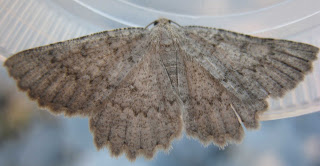 As the distribution maps shows (from the excellent Butterfly Conservation site) , it has quite a limited range 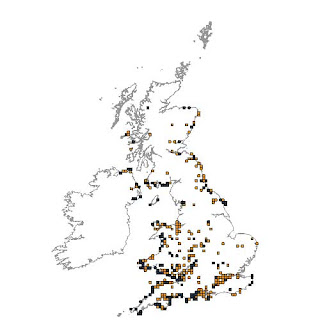 A total of 18 species were caught. 6 of the Micro moths were new records.
Mothing at ringing sessions has proved particularly useful at ringing demonstrations when birds are slow to be caught as children seem to be universally fascinated by moths. It has also stimulated some others of the group to start catching in their own gardens. As a result I was lucky enough to catch a very unusual moth for this far west in my garden today - a Beautiful Hook-tip, only the 3rd record for Ceredigion and one which has never yet been caught in Pembrokeshire. 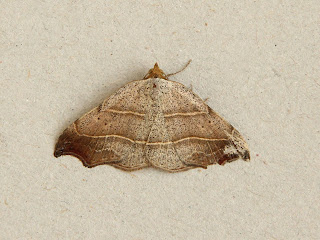 All records are submitted to County Recorders to go into national databases to monitor biodiversity changes.
Next blog - back to birds...........

A week-end in Mallard net rides....breeders and passage 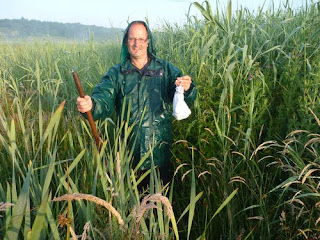 A very wet start to both week-end mornings....though the sun and heat did soon arrive ! 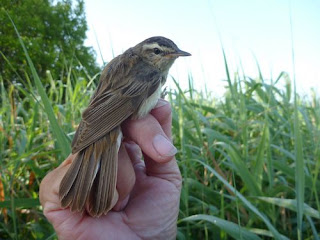 Sedge and Reed Warblers are target species in the Mallard net runs in Autumn.
With over 1150 Sedge ringed and 560 Reed Warblers ringed here in the past 4 years. Producing Sedge Warbler recoveries down the west coast of Europe, all the way to Senegal in west Africa. 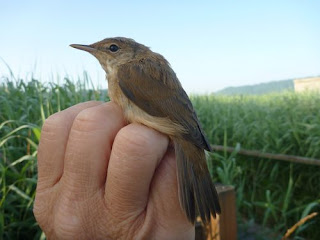 A typical start to mid-July ringing with 8 new of both species.

Two juvenile Redstarts today doubled our total to four in our five years of  CES. Our only other recently fledged juvenile being on the 9th July 2011. - a very similar date 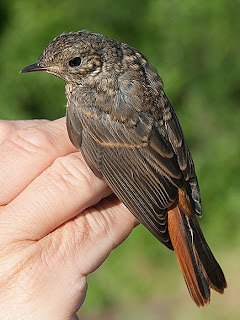 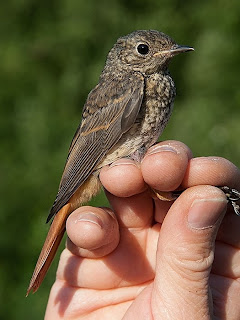 Posted by Richard Dobbins at 16:33 No comments: