Our Reed Bunting colour ringing project stepped up a gear today.
While following a large flock of Golden Plover and Lapwings over fields on the north side of the Teifi estuary we ventured along a bridleway near Cardigan golf course, rarely visited. The familiar sound of a Reed Bunting was heard from a hedge along a  turnip field. It was quite a surprise to see that it was a bird with colour rings. 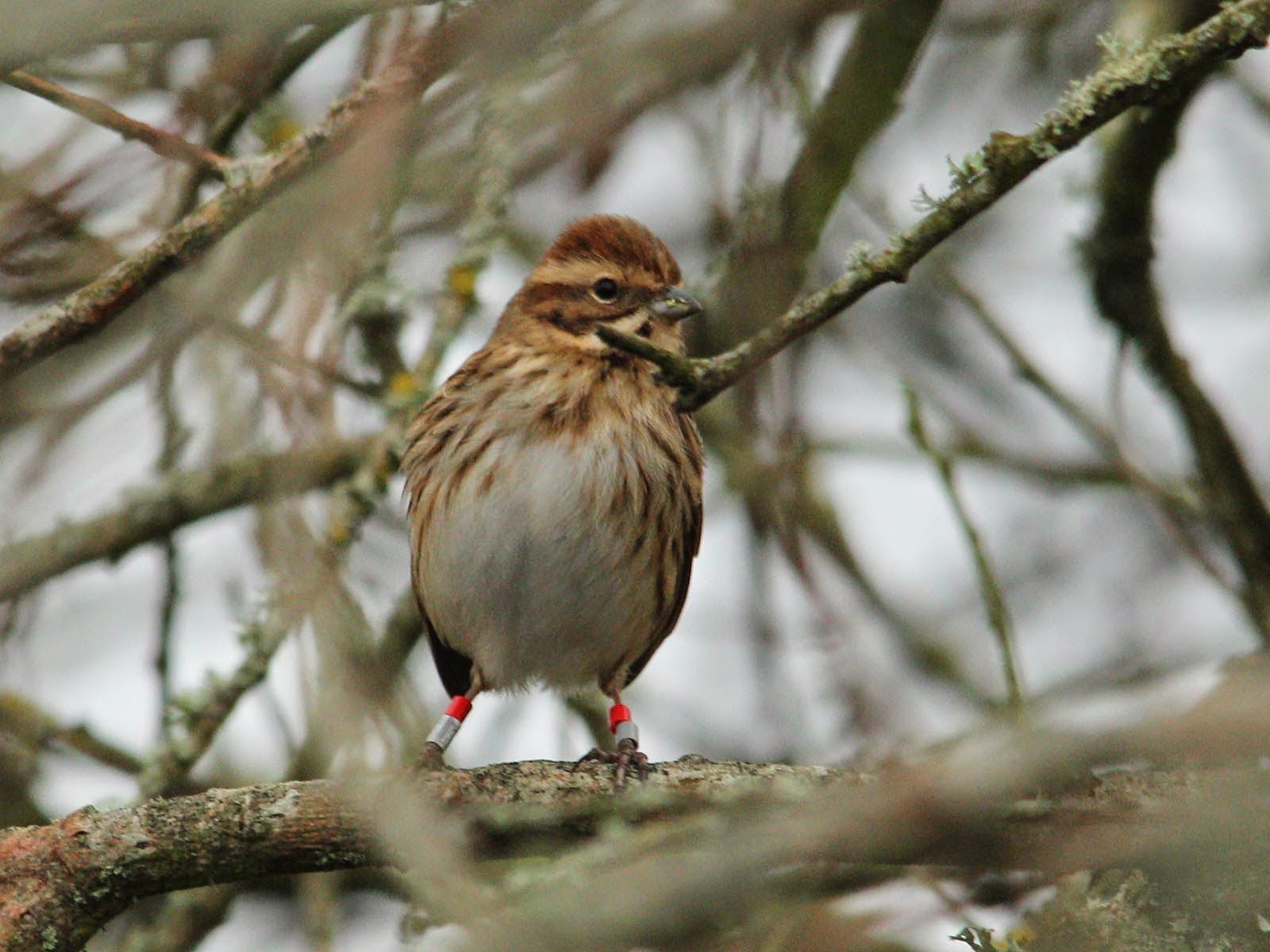 It was a female that we had colour ringed last May at the first CES of the year on the Teifi Marsh.
A movement of 4km to good arable fields where Skylark were feeding too. 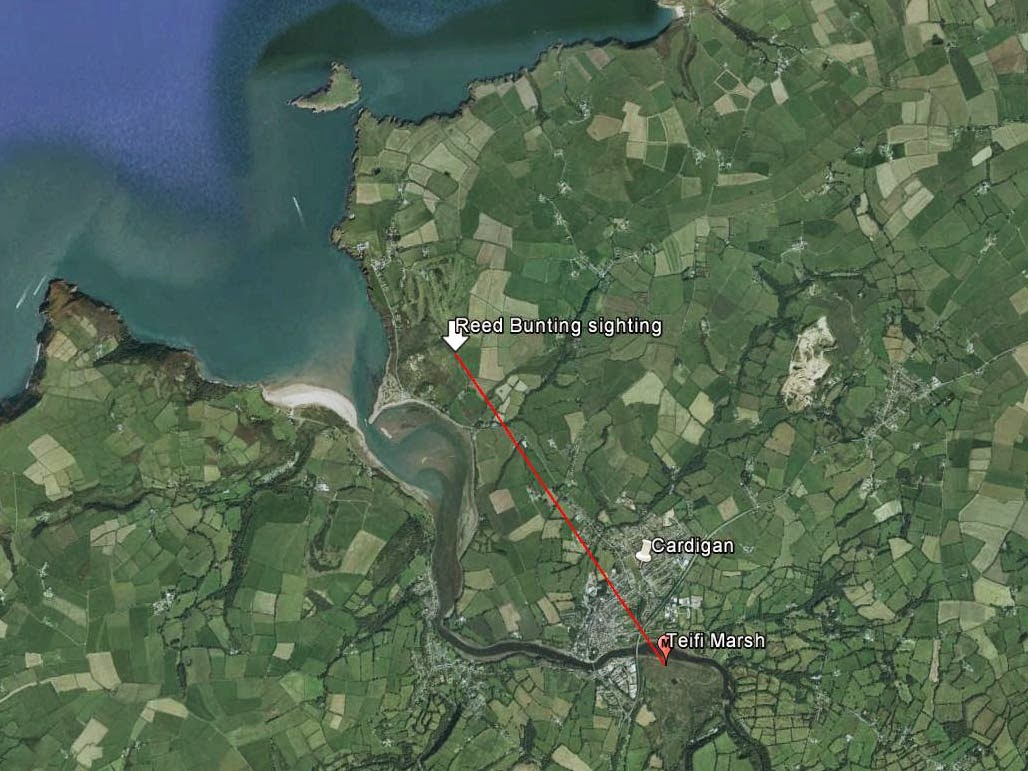 We spotted a flock of Reed Buntings a few weeks ago on the new South Ceredigion section of the coast path across Cardigan Island farm park. We need to increase our farmland wanderings to see if we can locate some more.

The regular photographers on the reserve are already sighting birds for us. Thanks to Colin Dalton for this one spotted near the main car park for the Wildlife Centre. 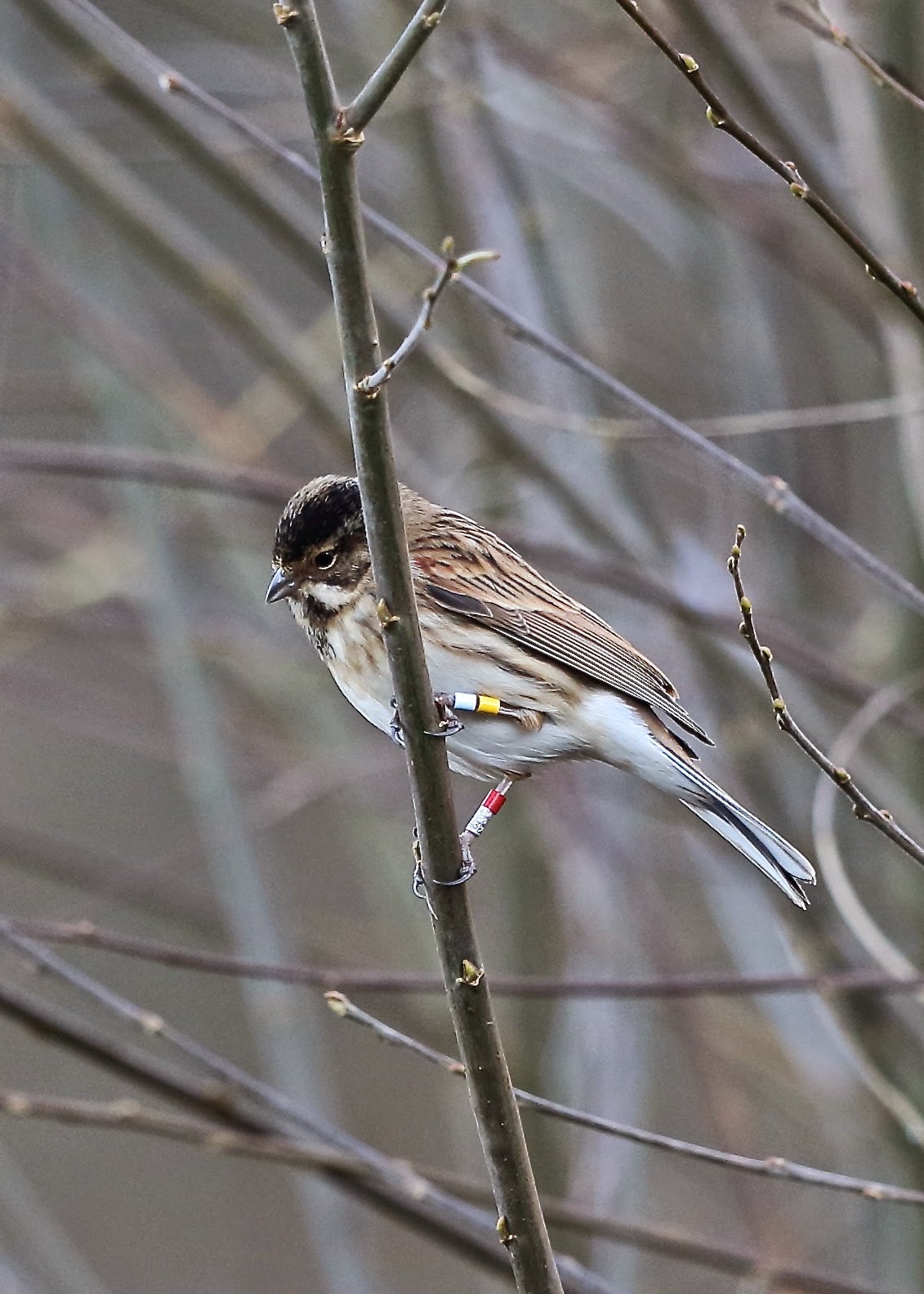 If you are lucky enough to spot one of our birds please send details via the contact form on this blog.
Posted by Wendy James at 21:18 No comments:

"Our" Siskins are returning ....
Two Siskins in Wendy's garden today and reports of singles in other gardens in the north of the county marking the hopeful return of Siskins in numbers. 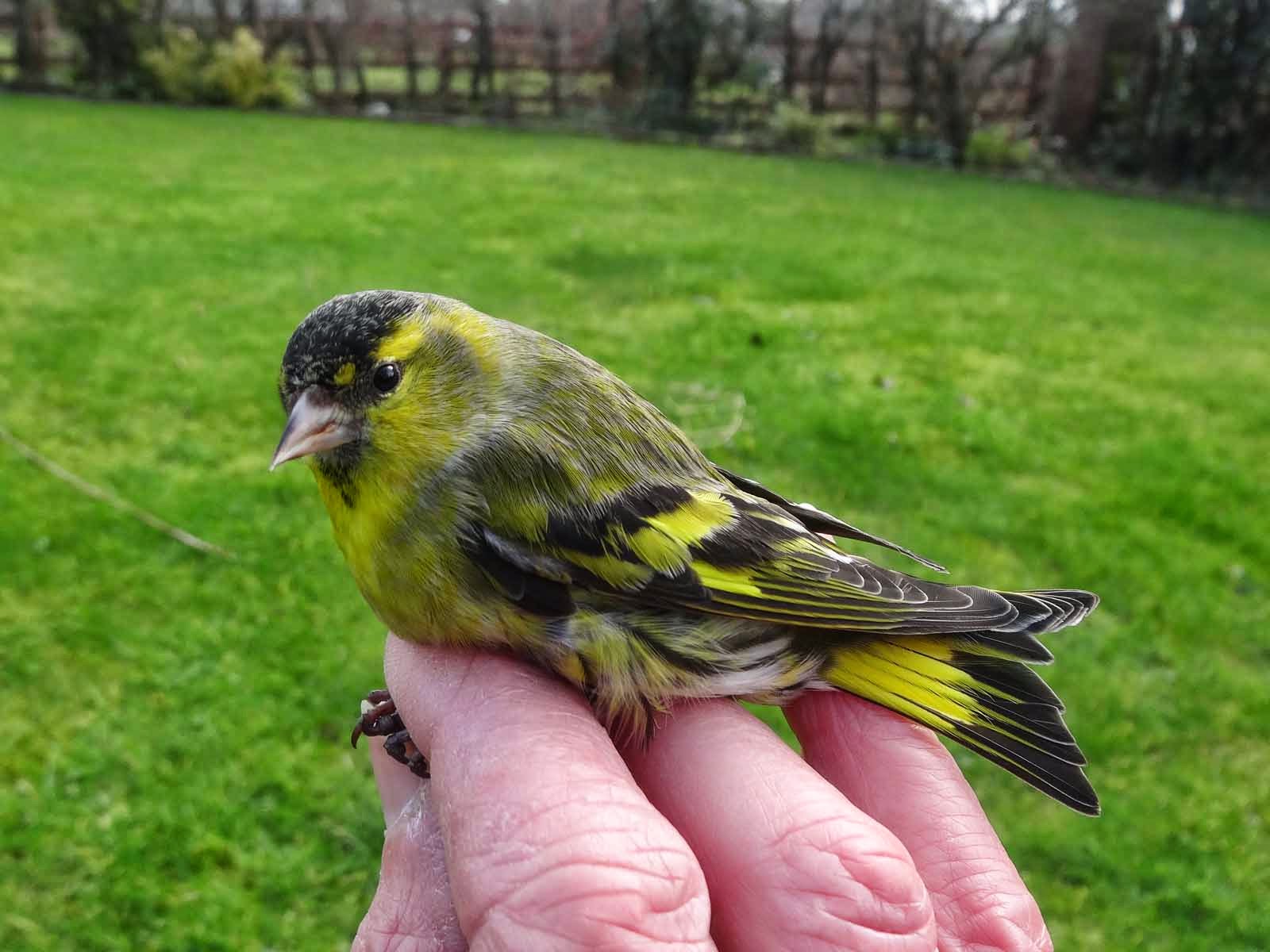 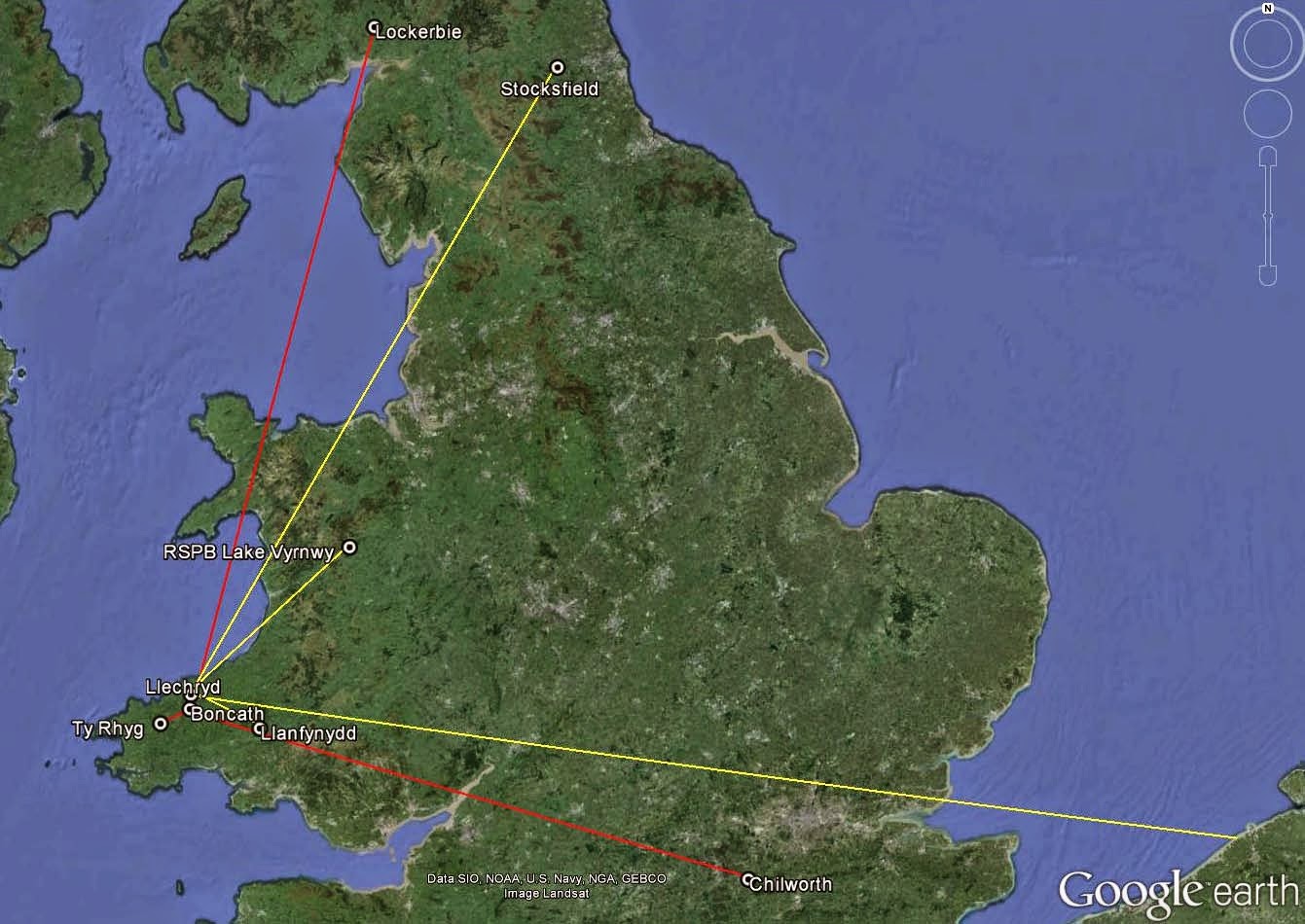 The map shows movements of some distance, with birds moving to Scotland and North Wales to breed. The Belgian ringed bird and the bird from Surrey, may be wintering with us or passing through. We have two main ringing sites for Siskins. The yellow lines on the map are movements to / from Wendy's and the red lines are to / from mine.

We catch our largest number in February and March, which are presumably migrants or returning local breeding birds. We also have a smaller peak in June and July with a high proportion of juveniles presumably from a very local population, and as mentioned above, all these birds whether local breeders or post breeding passage birds disappear in July and August, to moult and migrate ?

Juvenile Siskin from last May.. 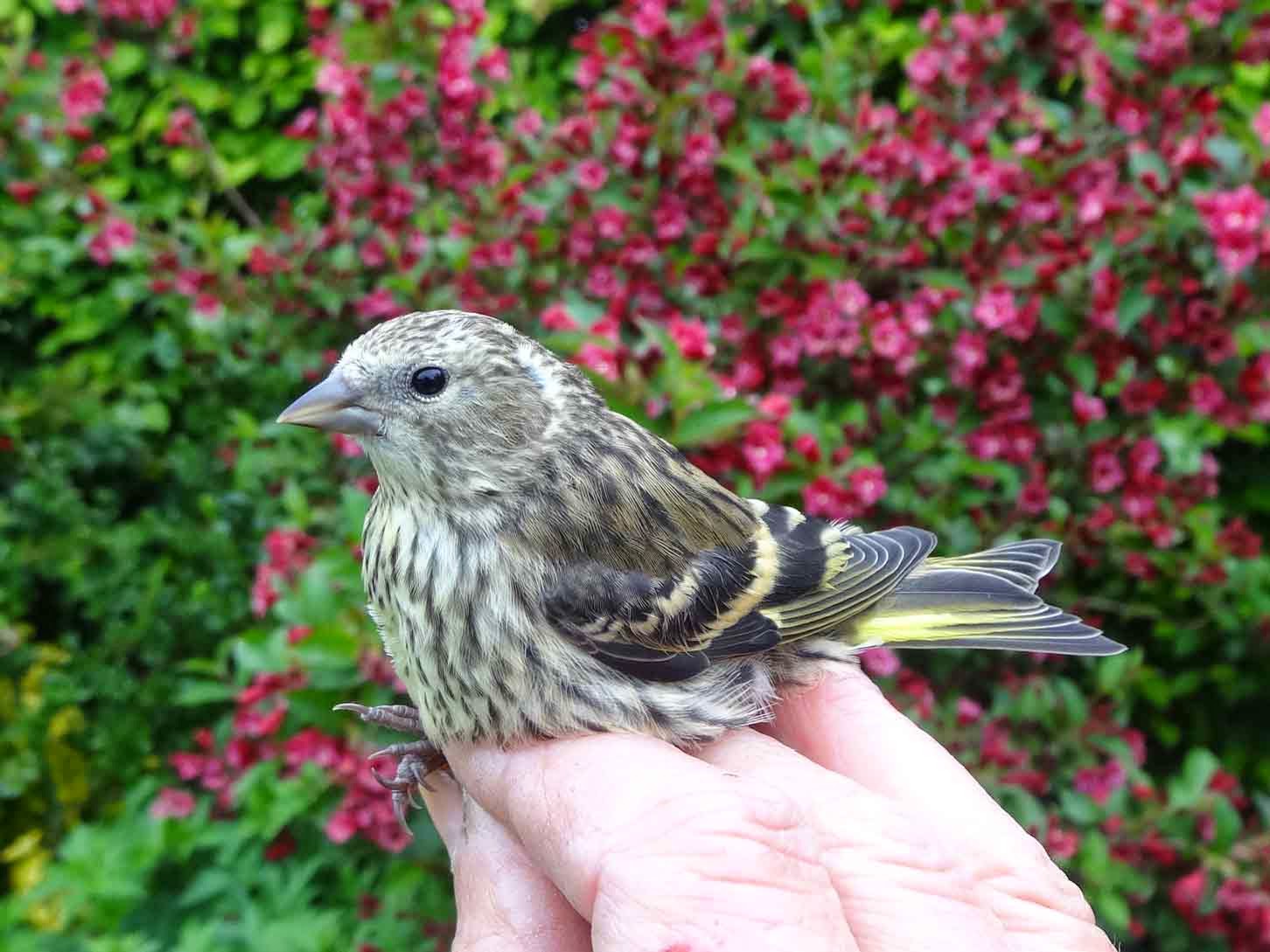 A real fascination is the interchange between the two sites, Boncath and Llechryd, 6km apart. We have more than 20 birds that have moved between the two sites, mainly during the winter period but also during the summer including one 3J juvenile visiting both sites over two days in July. One female managed to find another member of the ringing group's garden - 7km away in St Dogmaels one day after being ringed last February !
Another nice control is of a breeding female in July 2013 ringed in Ty rhyg plantation being controlled at my Boncath site in July 2014. 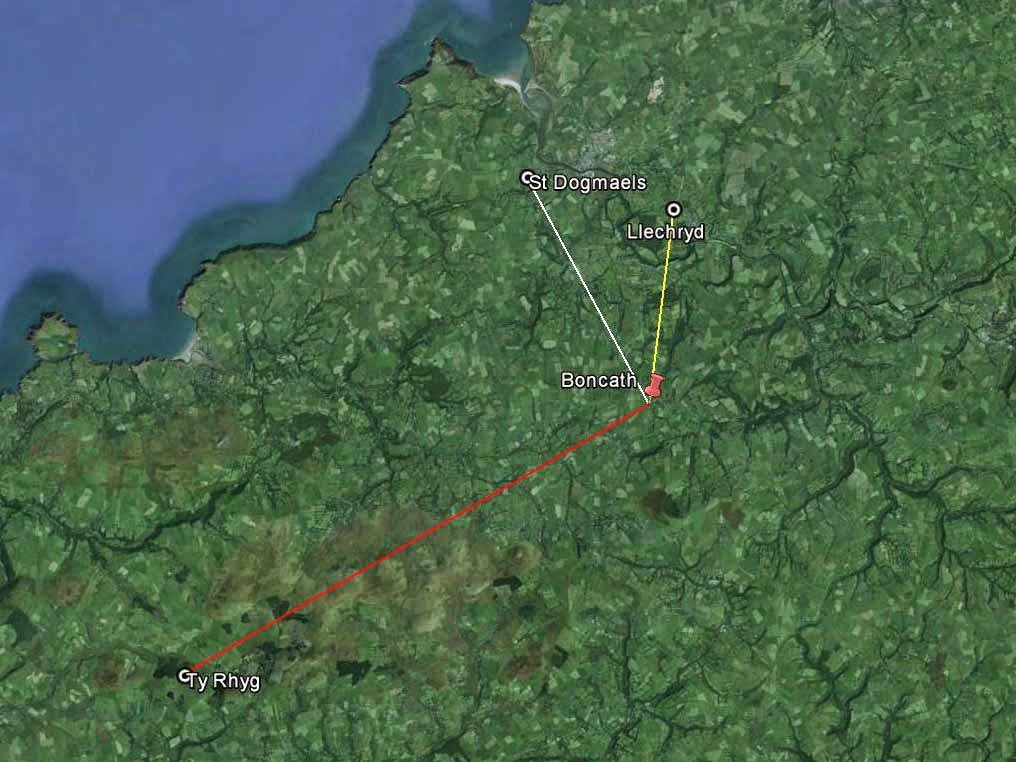 RAS...
My Boncath site has only been running for two years, and excluding the controls from Wendy's site 6 km away, during the two month period 31st May - 31st July 19 adults were recaptured from the previous year. These numbers do appear to be in line for the start of a nice Retrap Adult for Survival  project on the Siskin in West Wales.

Unlike our mid-Wales lamping colleagues we are rarely out past midnight !!
A night off tonight due to the weather, below how our fields looked towards the summit of Frenni this afternoon... 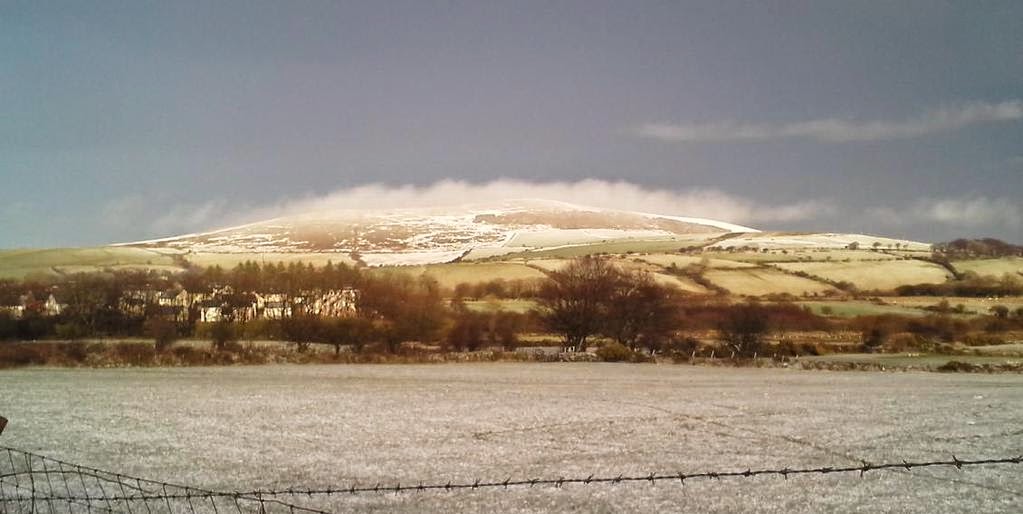 With the moon waning we have at last been out with the lamp for the last few nights. Only seven Woodcock caught so far. Disappointing, though we think that our current wintering numbers may be low.... 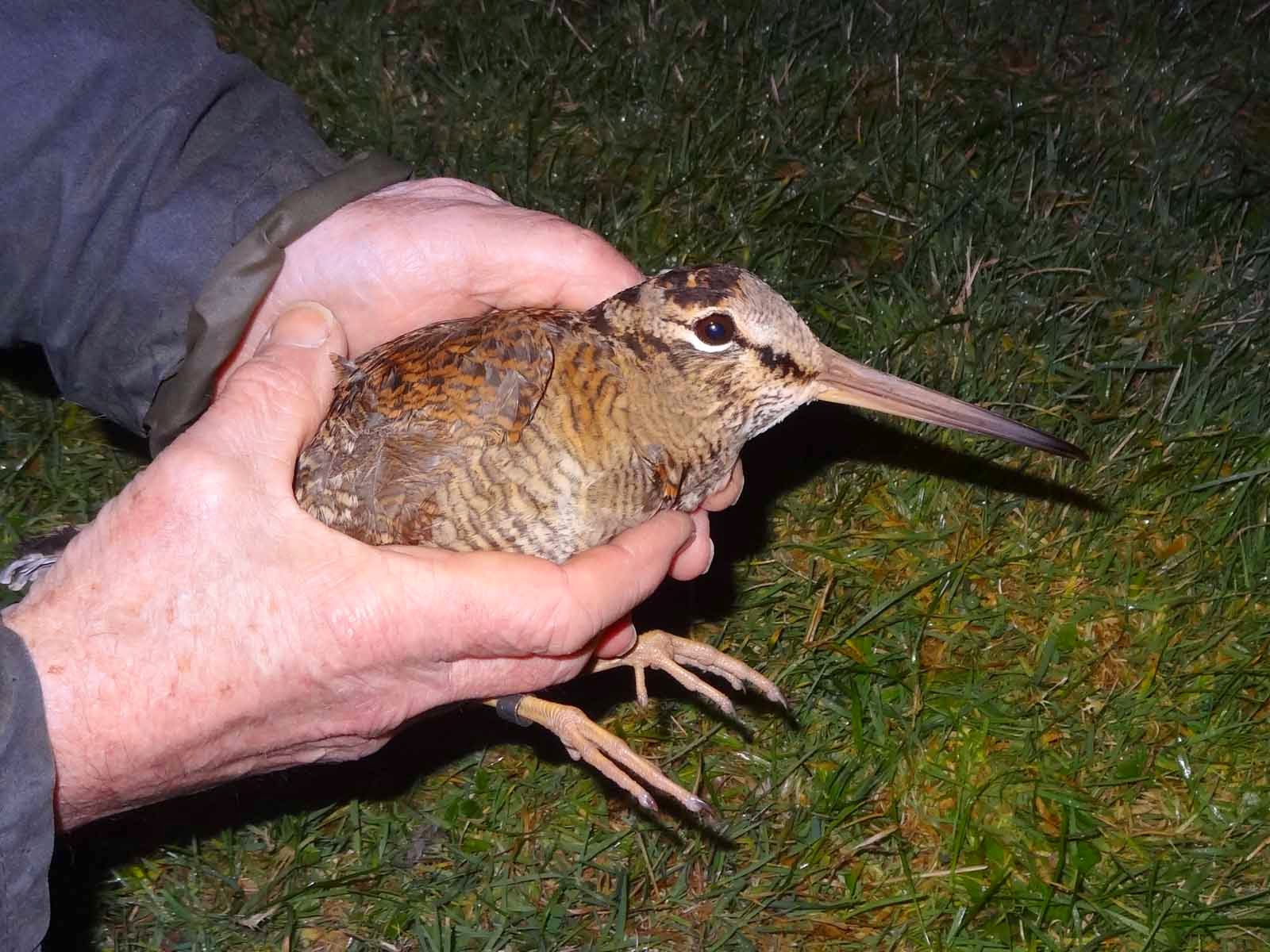 Fieldfares are being encountered in greater than usual numbers ... 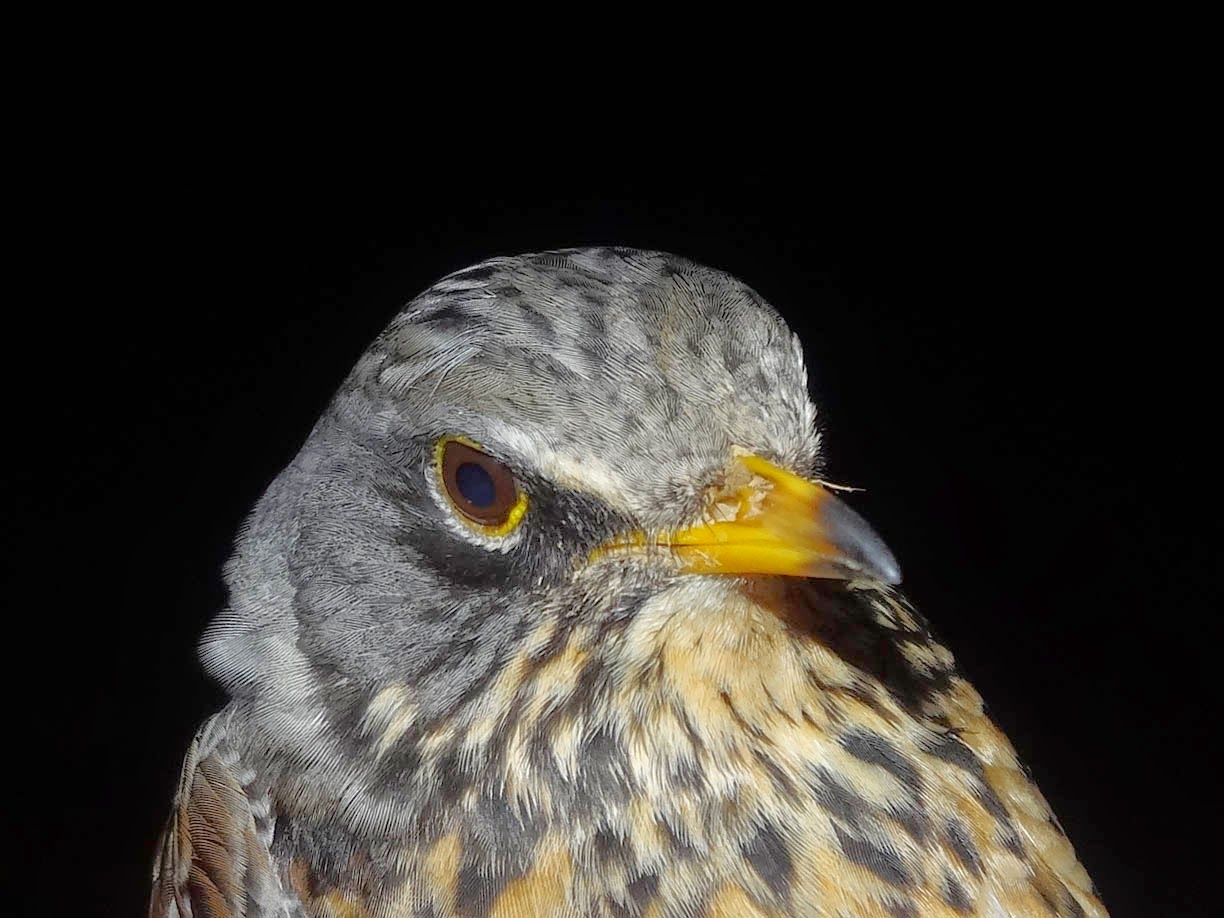 Meadow Pipits have provided great interest with our second retrap ! 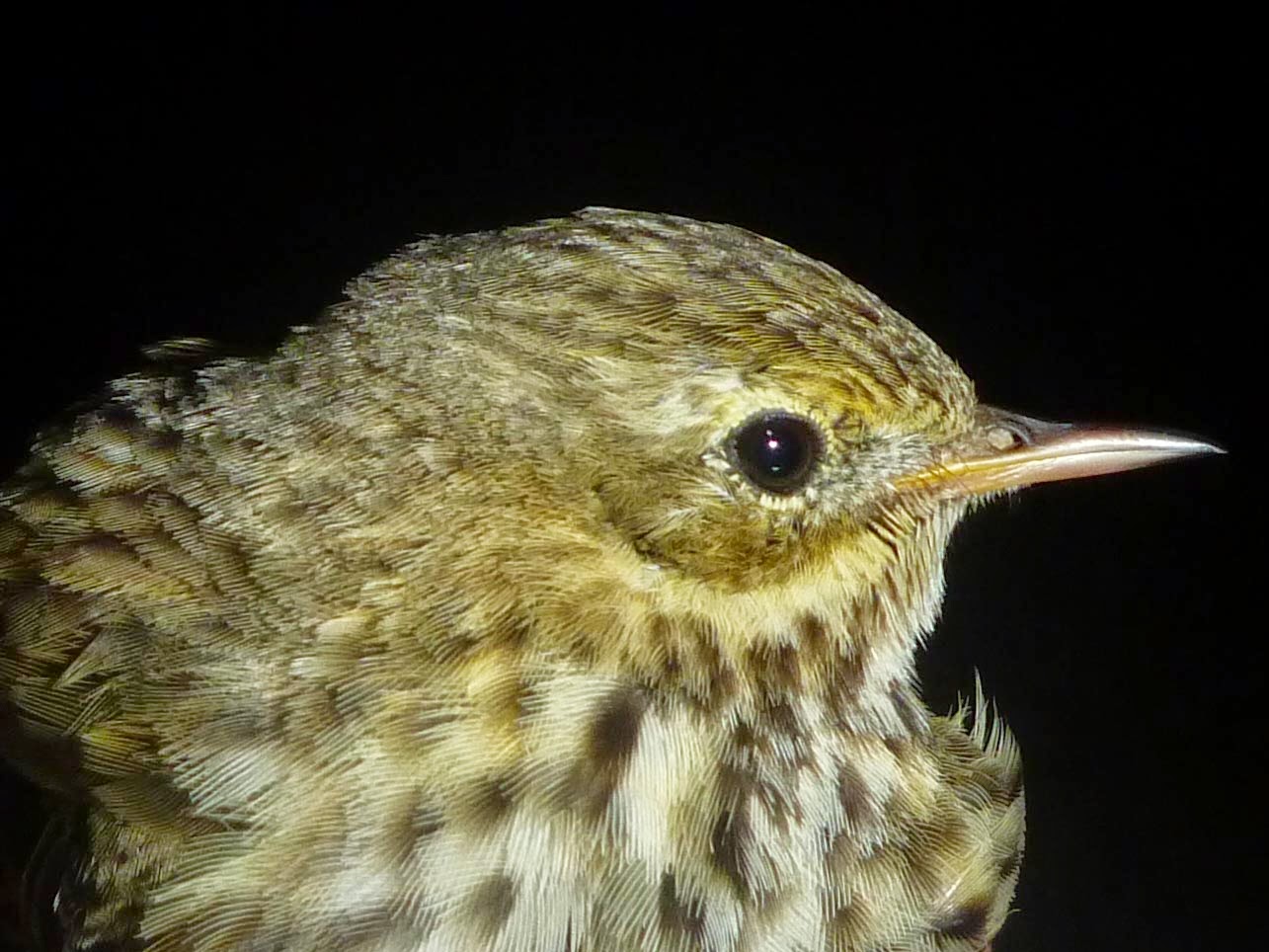 D615995 was ringed on the 25th January 2014, and we re- encountered it on the 9th January 2015.
The wintering environment is hostile up here, and birds must move in periods of ice and snow, so quite amazing to find a site faithful bird re-wintering up here. The Migration Atlas and Bird Atlas suggest that being faithful to a wintering site is expected for Meadow Pipits. Though not far from the coast, wintering at this altitude on grazed upland pastures seems a less favourable strategy....but obviously successful for this bird !!

Last year we re-encountered a Meadow Pipit  on the 21st of March having been ringed on the 24th December, almost three months later in the same fields as the above bird. I discussed at the time may be a returning migrant....perhaps not.

Skylarks are found here too in small numbers, 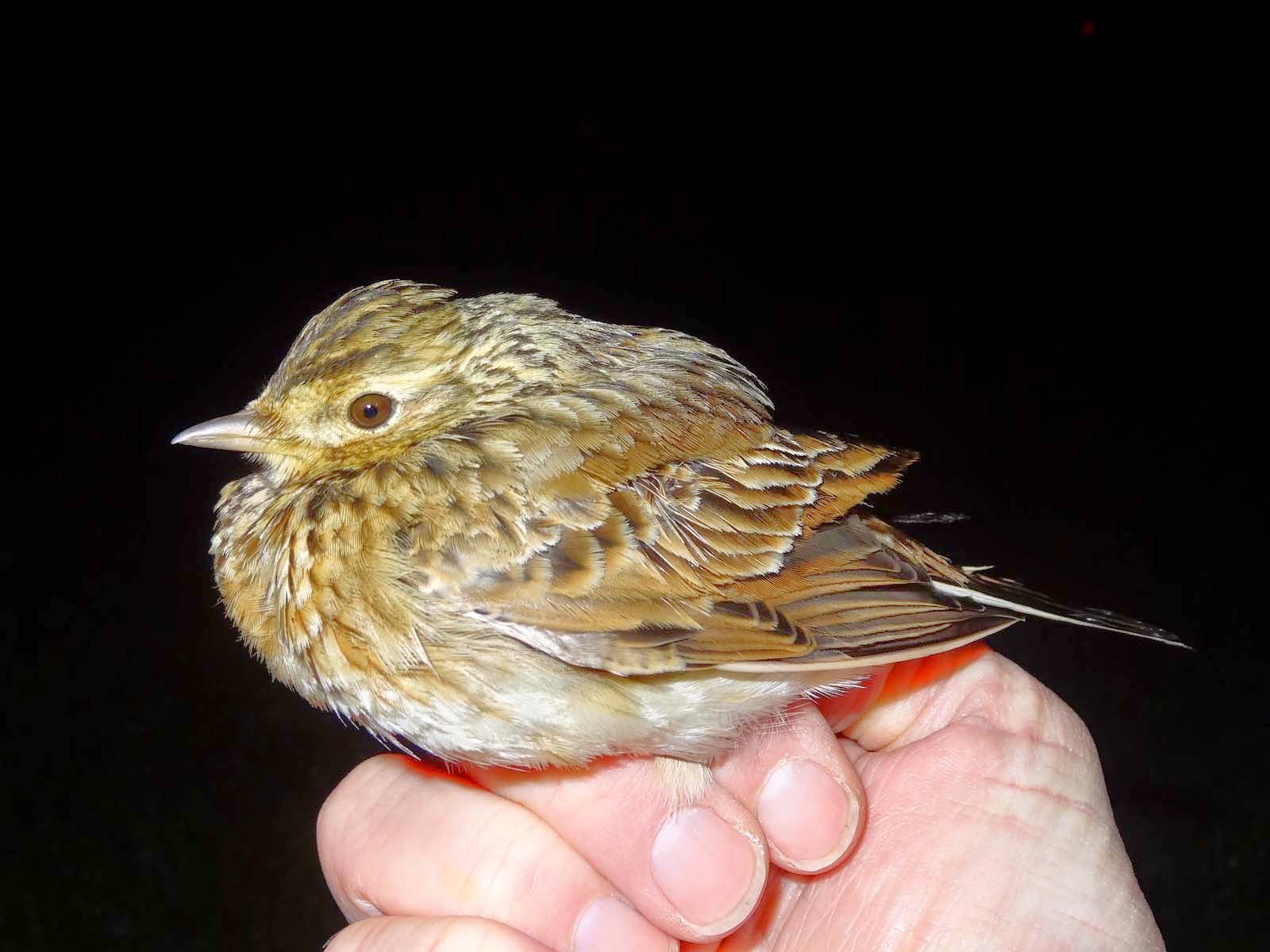 In my wandering reading this evening  I came across a record of Woodlark in December 1981 in these hills.  We will continue with our (pre-) Midnight Meanderings...

See Ruffled Feathers for more on the all night activities...of Mid-Wales Ringers

Posted by Richard Dobbins at 22:55 No comments: 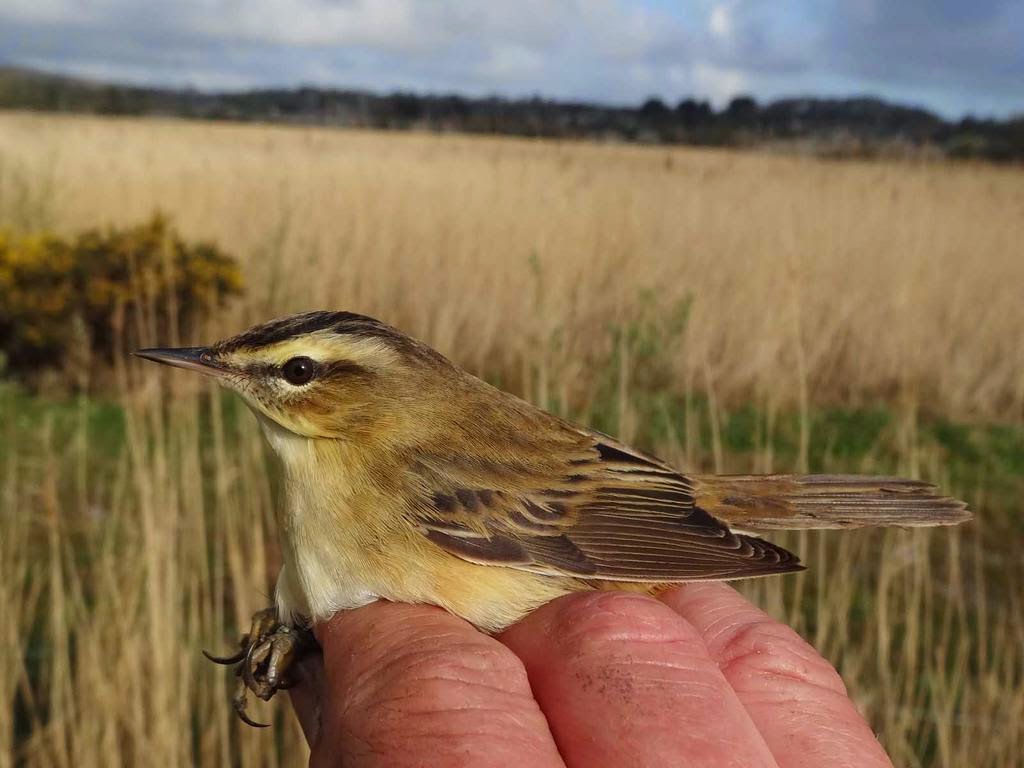 This Jack Snipe was ringed on the Teifi Marsh at dusk today. 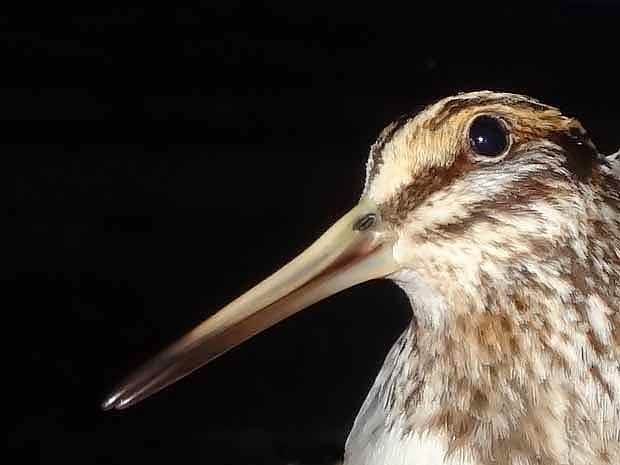 During our efforts to find more about birds using the Ceredigion side of the Teifi Marsh reserve in winter we have often flushed a few Jack Snipe in a marshy area near our nets. We have only caught three previously and those have been in April/May soon after the commercial cut of an area of the reed bed is done. Now we know that they are on the reserve earlier in the winter we can concentrate our efforts at this time of year.
All the information we gather is fed back to The Wildlife Trust of South and West Wales to help them plan habitat management for these secretive birds. 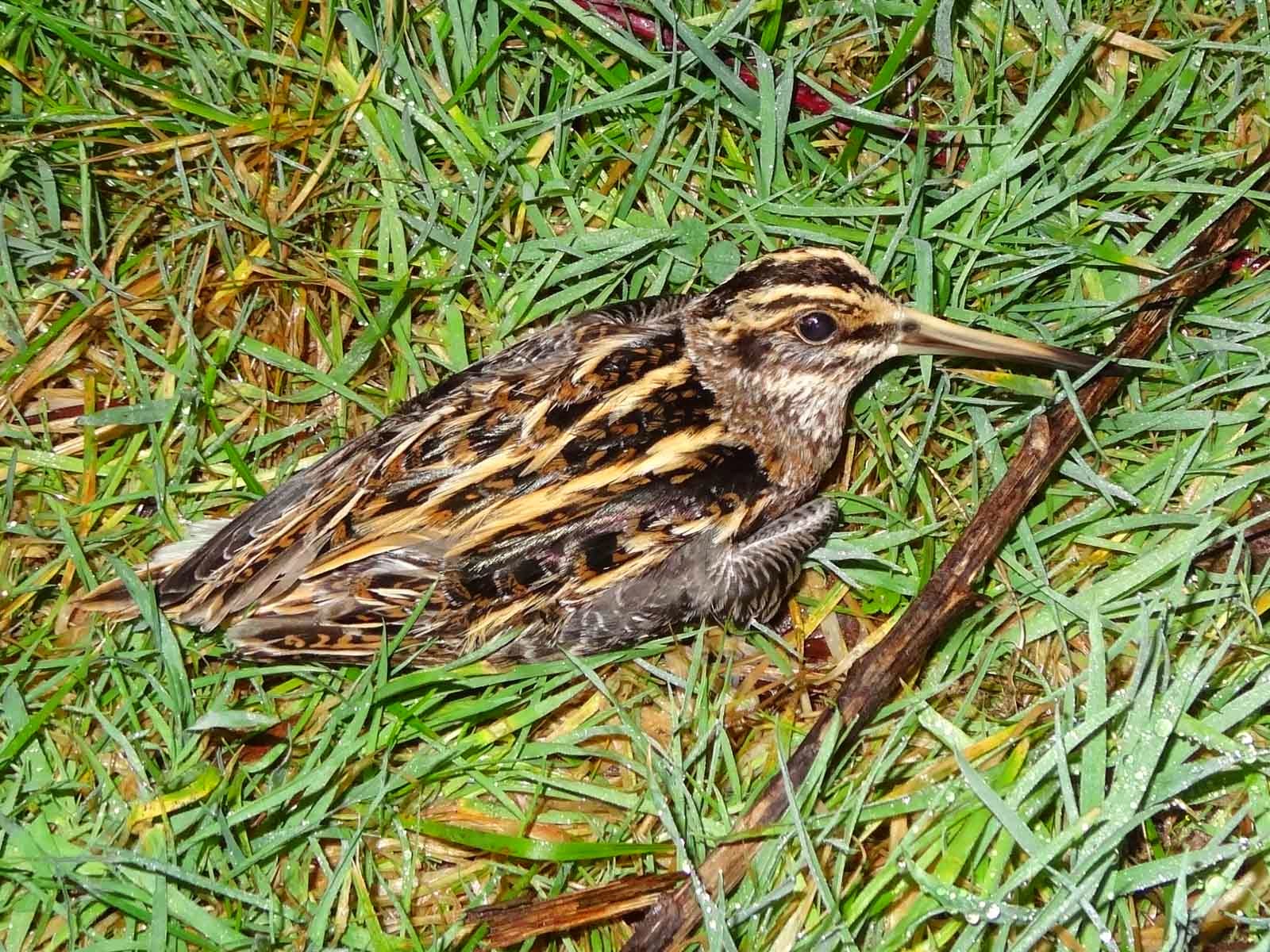 We saw about another six Jack Snipe today so would like to think we can ring those too before the winter is out.
Posted by Wendy James at 18:58 No comments: