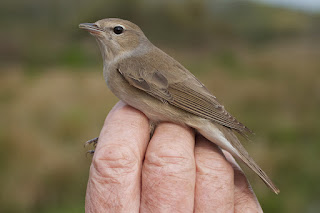 X769942, a Reed Warbler was also ringed as an adult in 2009, and this is the 5th year in which we have caught this male during the following 7 years.  Lots of site fidelity and adult recapture data from the 30 retraps at CES 3 today, but also what must be thought of as a small fall... 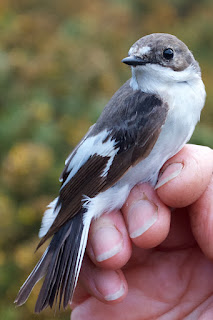 This second year male Pied Flycatcher was also a star after the 4am rain. The fall included 29  new Sedge Warblers, 8 new Reed Warblers and 2 Willow Warblers across both the CES site and the Pentood nets. These nets are across the other side of the marsh. (distance beyond that required ref. CES protocol).
The Reed Warblers may remain to breed as we are at the western edge of their range, most of the Sedge Warblers were still carrying fat suggesting a distance to travel...

Almost as unexpected was this Grasshopper Warbler on the CES site. 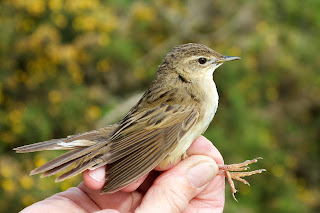 Difficult to believe but the Pied Flycatcher was the 1st non pulli Pied Flycatcher to be ringed by the Group, and a first for the Teifi Marsh sites.  Other highlights today included a new adult male Kingfisher, 2 retrap Cetti's Warblers, and we colour-ringed another Reed Bunting.

To finish today's activities, the Group's 1st juvenile Siskins of the year in Wendy's garden this afternoon. 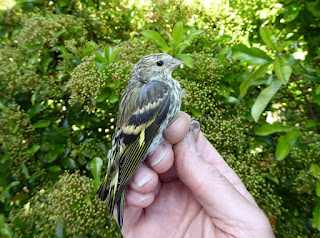 (all photos Charlie Sargent, except the Siskin-Wendy)
Posted by Richard Dobbins at 18:33 1 comment: 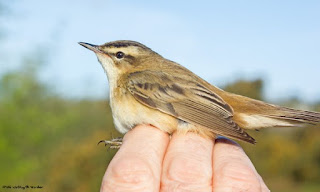 (Photo by Dean, a new member of the Group)

We have several recoveries of birds migrating south...or returning north. These mainly involve movements to the west coast of France and to the marshes of Spain..
.....and with a bird to Senegal. 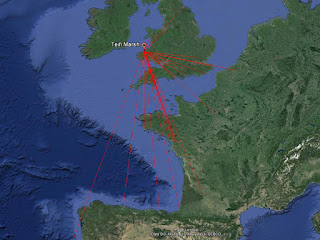 This Spring, our first recovery of a bird originally ringed in Ireland and now on its Spring migration back across the Irish Sea we presume.  X720412 was ringed as an adult in June 2015 on Great Saltee Island, Wexford. It was retrapped by us this week on the Teifi Marsh. 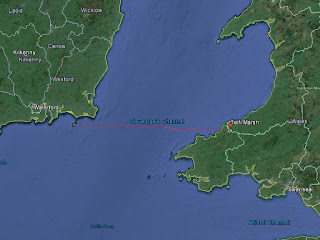 Other UK and controls of Sedge Warblers this Spring, (this week !!) now number 1 Belgian, 7 French (Museum Paris on the ring) 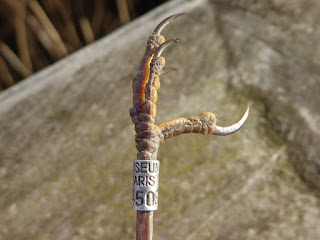 and four ringed elsewhere in the UK. One we caught on the Teifi Marsh last weekend was ringed by Steve Dodds on Cors Ddyga, Anglesey as a juvenile on its autumn migration in August 2014.

Reed Warblers are now returning. We retrapped three of our returning adults today, hopefully a few more in the morning. Our Reed Warbler RAS project is underway for a further season.
(RAS- Retrap Adults for Survival)
Posted by Richard Dobbins at 21:10 No comments:

120 Sedge Warblers -- what a start to Spring

Early days this Spring in the Mallard area of the reed bed on the Teifi Marshes Reserve...our home !!
We have now caught 114 new Sedge Warblers...and a massive start. We have only caught 66 during April in the last 7 years, though we can catch c200 each May. 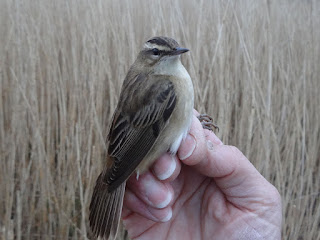 We have also captured 3 French, 1 Belgian and 2 UK controls this April.
So far none or our previous years birds have been captured. Reed Warblers are slow to arrive with just 2 captures, 1 a new bird and 1 retrap from 2014, also retrapped last May. One recent Spring, the first 10 Reed Warblers captured were all recaptures of "our birds" of previous years.

Gower Ringing Group have captured one of our 2011 Reed Warblers - though perhaps should be considered theirs....Oxwich Marsh 30th April 2016: Return of the Reed Warblers 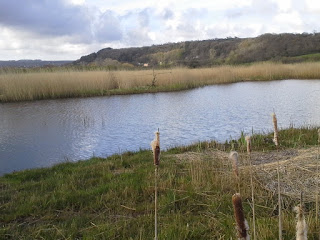 A view from the front of Mallard pond towards net Aqua 1
.....which has of course caught Aquatic Warbler ...!!!

No chance of opening the nets this morning in a strong south westerly but weather looks better for our first CES tomorrow. 12 conservation students from Writtle College in Essex will be joining us.

Posted by Richard Dobbins at 08:46 No comments: