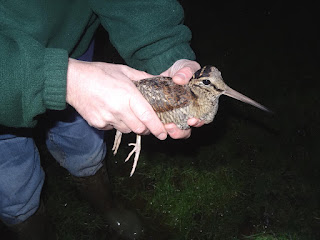 Not our busiest pre-Christmas Woodcock ringing, hopefully with the predicted change in the weather we may find a few more...
Frank was only the third Woodcock to be captured in this field at our Blaeneifed site. It is usually our best field for Golden Plover but none there tonight. 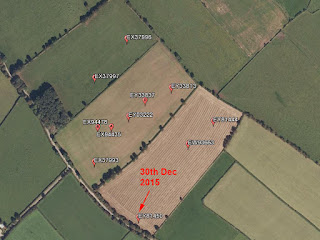 (photos and map by Wendy) 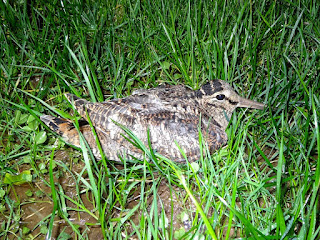 We have been asked to collect dislodged feathers as we process to be used to support biometrics to confirm sexing. A study in Denmark has shown a bias towards females wintering in their study area.
Is this related to different sexes wintering in different areas or are more males shot on the breeding grounds producing a sex bias between adults across the wintering range ? Due to the breeding strategy of the females, does having less males actually affect breeding success......?
Woodcock in the winter....something exciting to do in the dark...!!
Happy New Year...
Posted by Richard Dobbins at 22:35 No comments:

Woodcock EY33804 ....Was shot by hunters in Bassin de Champagney, Haute-Saone, on 20th December 2015. The most southerly Woodcock that we have had recovered. 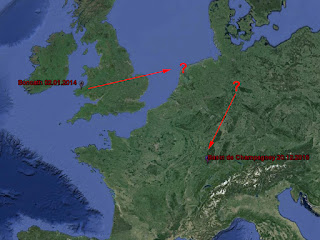 Where was the likely breeding area for EY22804......?
Ringed as a second calendar year bird on 2nd Jan 2014 at our Boncath site in the Preseli Hills, North Pembs. Why didn't it return to West Wales ?
Numbers of wintering Woodcock are low at present, in fact none seen on four of our best fields at our Crymych site tonight - though under the moonlight. 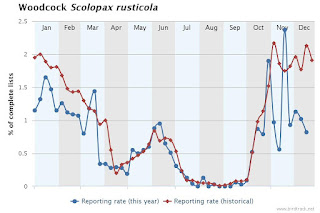 The BTO Birdtrack graph suggests that fewer Woodcock have arrived in Britain from the continent.
If the mild wet winter continues presumably the Woodcock will not reach us in any number....?

We will certainly be out looking ! 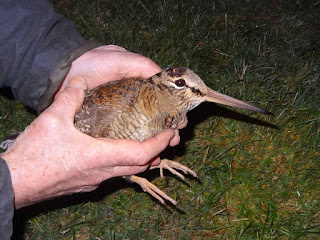 Posted by Richard Dobbins at 07:22 No comments: 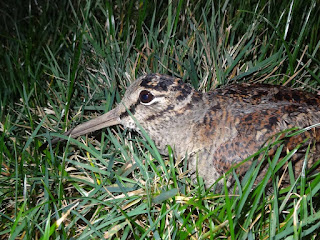 At 2200.. EX94433 was the fourth Woodcock captured last night.
The first adult of the evening, and had been ringed 380m away in the adjacent field. This bird has not been caught since, and is one of c80 Woodcock ringed on this site in the past five winters. 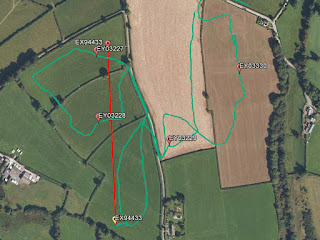 You will have seen from previous posts that we use a geolocater in the field to enable us to record the exact ringing location. The red line indicates the distance between ringing (red) and recapture (yellow). The green line is our path last night.
We also carry IPMR (Integrated Population Monitoring Reporter) in the field, all 31,449 ringing records as an Excel spreadsheet... 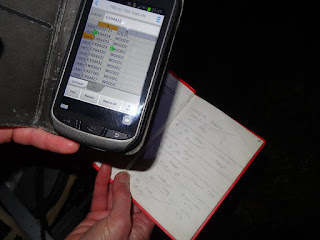 Having access to ringing data in the field cemented our enthusiasm. We knew that EX....birds were "history", and we soon discovered that EX94433 was our best recapture, almost four years on !!

It was one of 9 Woodcock caught that night which we wrote about in "Blown away by 9/9!" 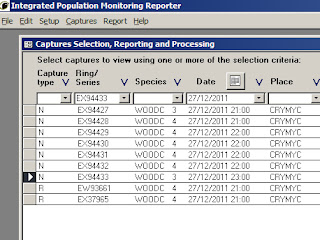 Four new Woodcock last night, one adult, three juvenile and the one recapture. One Meadow Pipit was also ringed. Crymych is one of our four main winter Woodcock survey sites on sheep pasture in North Pembrokeshire. It is our second highest at 170m and so far this winter is where we have seen the most Woodcock.
Posted by Richard Dobbins at 07:57 No comments:

Garden by day and fields at night..

The windy weather continues, greatly limiting the opportunity to open mist nets. A brief respite allowed a session with our trainee, Ryan. 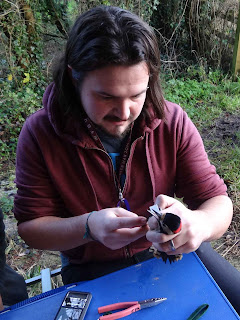 This was his first experience of garden ringing so two new species for him but common in the garden; Greenfinch and Great Spotted Woodpecker. A Blackcap caught was the second this week, the first was carrying a lot of fat and weighed a massive 22.3 g! 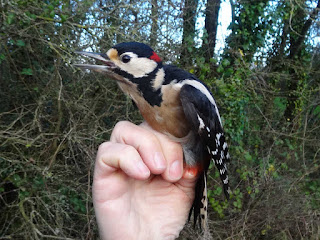 This was a new Great Spotted Woodpecker, the 21st in my garden since 2008. We also caught a retrap ringed 3 years ago and not seen since.
On Sunday there was an even shorter gap in the weather but it gave a chance for Mark, the Assistant Warden on Bardsey, to ring with us before his return the island. A Nuthatch was a new species in the hand for him - not many of those on Bardsey!

The windy weather does mean it is good for lamping. We have walked many miles in the last week but few birds caught in the continuing mild weather. Golden Plover numbers are increasing slowly at one of our sites. 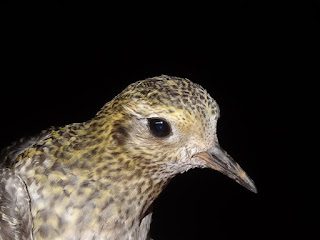 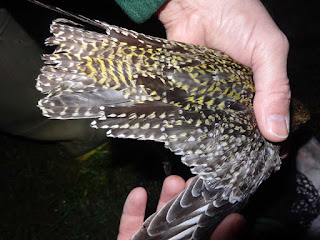 so it was good to compare with an adult 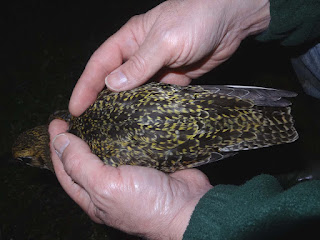 Woodcock numbers in our usually good fields are very low. Owen in Mid Wales has already caught over 100 but we have only caught four. 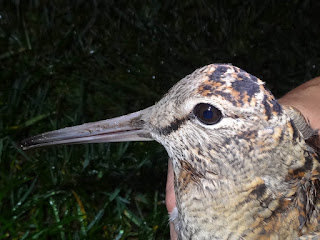 Many fields are still ungrazed with very lush and long wet grass and others have what seems to be a lot more sheep than usual. Hopefully numbers will increase soon.
This picture illustrates how good the fields can be with birds previously ringed or retrapped shown. During last nights walk shown of 3.5km we only saw 2 Woodcock. 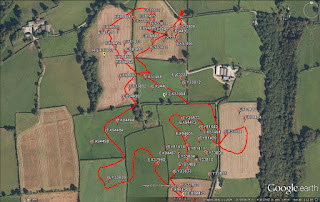 Unusually, no Fieldfare were seen and just a couple of Skylark, one of which we caught.
Posted by Wendy James at 08:16 No comments: