These three pictures, taken on the 18th of April, illustrate the wide range of plumages that male Linnets can display going into the breeding season: 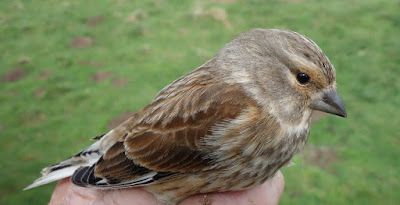 This one has no red on it at all, only by parting the breast feathers can you see broad brown tips on the feathers, distinguishing it from a purely streaky female. It was first captured as a juvenile in July 2017. 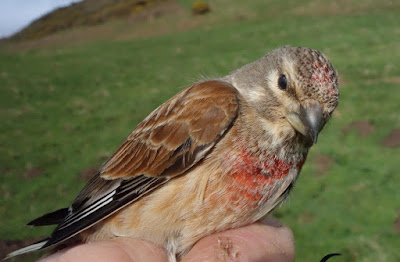 A typical example, this was an adult when first captured in June 2017. 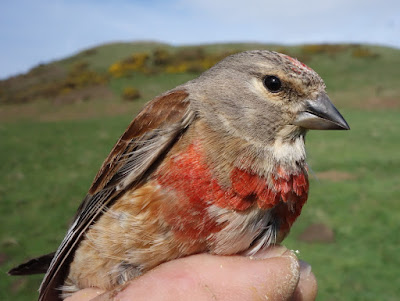 An extreme case, bringing to mind birds typically seen in the Mediterranean at this time of year, and technically known as a 'stonker'. This one was also fledged prior to 2017. 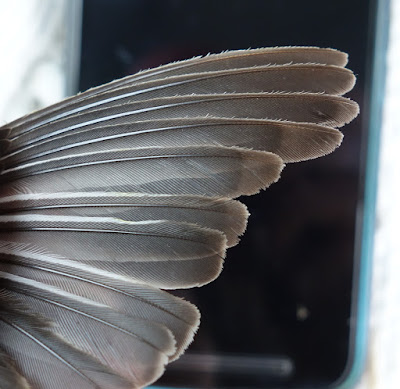 I've spoken before about Linnets appearing in West Wales in the spring with bleached primary tips, a feature more usually seen on warblers that spend the winter somewhere considerably sunnier than Ceredigion. This female, fledged in 2017, shows the feature well. The brown tips are the parts of the primaries that are exposed to sunlight when the wing is closed.

In the early morning, usually pre dawn, we open the 5 nets that are sited around Mallard Pond. Until the 5th April Reed Buntings were the main target for our RAS though in the evenings we were catching a few Pied Wagtails and enjoying the 2-300 hirundines feeding. 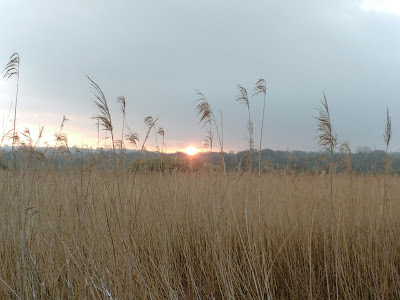 On Sunday the 8th April at least three Sedge Warblers were singing and Andrew and I caught our 1st Sedge Warbler of the year. Not until the 12th did we catch our 2nd Sedge. This Sedge had a fat score of 4 and weighed 13.5g unlike the 1st bird with no fat and weighed 10.9g 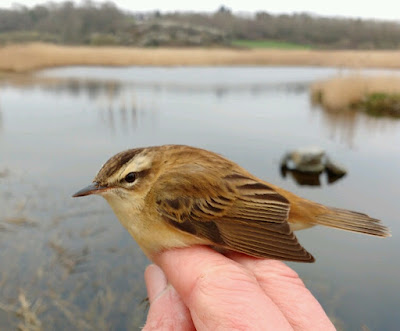 Our 2nd Sedge Warbler with most of Mallard Pond in the background.

We did catch our 1st Cetti's Warbler of the year on the 9th which surprisingly was unringed, but the star bird that morning was a male Reed Bunting we ringed in August 2011...approaching 7 years old.

Mallard Pond with a setting sun... 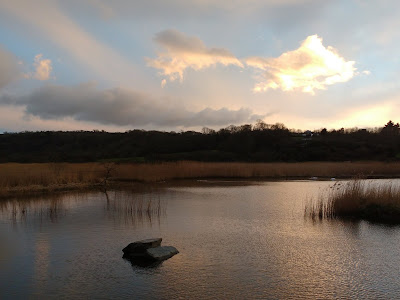 In the evening the Teifi Marshes are a great attraction for hirundines and wagtails. Peak counts of over 100 White Wagtails are recorded and we have a recovery of a ringed male to Iceland. Swallows and Sand Martins both occur in the 100s and feed on the pre dusk feast of insects. Catching these species in Spring is less successful than Autumn and we caught our 1st White Wagtails on the 11th April. 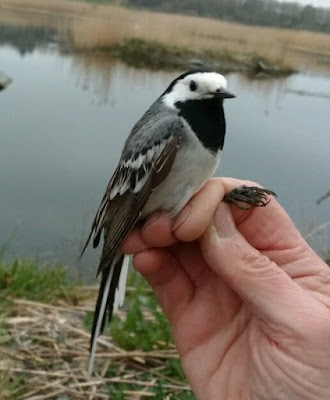 We have taken the Mallard nets down for a few days due to poor weather and a visit to Skokholm Bird Observatory.
We will be back on the 27th and ready for the main passage of Sedge Warblers here to refuel on stopover and the arrival of our breeding Reed Warblers

Karen has been ringing on Goodwick Moor including catching the 1st Willow Warblers - 5 on 13th April and she heard the 1st Grasshopper Warbler singing too. 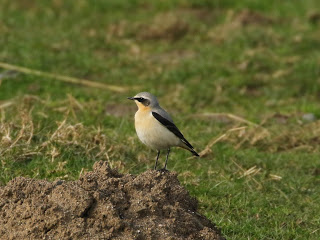 At Mwnt we catch migrant Wheatears in spring traps, Wendy with Charlie and Alison caught our 1st of the year on the 27th March in between whoosh net catches for our Linnet RAS project.

We catch breeding Siskins as part of a RAS study as well as migrant wintering birds. 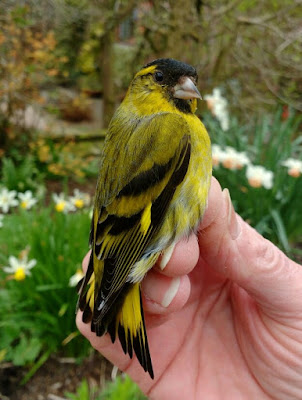 A quick summary of birds at my Boncath site, so far in April (1-13th) I have caught 9 females with brood patch 3 and 22 males with active CP.

Posted by Richard Dobbins at 21:03 No comments:

Return to the reed bed

With the end of March fast approaching, it was time last week to prepare our reed bed nets ready for Spring migration. A look back at previous years shows that the first Sand Martins and White Wagtails have been caught at the end of March but not this year.
Unfortunately, persistent wind and a drop in temperature has slowed down our effort but the most notable species caught during the week was Reed Buntings. 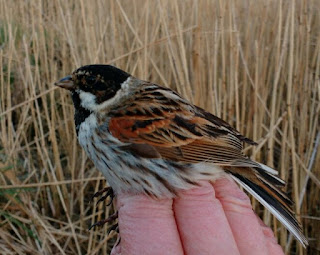 Another 6 added to our colour ring study birds. The colour rings enable the birds to be encountered again without catching them as the colour rings can be easily read and the unique combination enables us to look up where and when the bird was ringed. Over the winter, several different birds have been spotted around the feeders at the Visitor Centre and along the cycle track through the reserve. 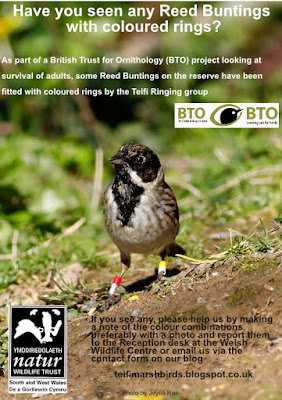 The oldest male seen over the winter was ringed in 2014 and seen each year since.
Thanks again to the photographers who keep a look out for our colour ringed birds. Particularly valuable are records from April 1st - Aug 31st, the period of our RAS study

Just one Pied Wagtail was ringed last week but on two evenings around 100 have been seen going to roost. The Teifi Marsh is a major stop over site for White Wagtails on migration to Iceland and many have been ringed by us, with one recovery from Iceland. All we need is a window in the weather..!!

Looking ahead to our CES season, we have been able to purchase new bamboo poles thanks to a successful grant application to the BTO.

The Linnet project continues at Mwnt but low numbers for the last two weeks possibly implies that our wintering population has moved north and our breeding population have yet to arrive. We did catch a smart male Stonechat though. 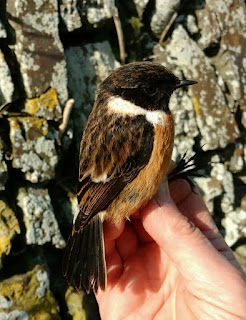 and the first Wheatear of the year. The headland is good for migrant Wheatear but very few have been seen so far this year. 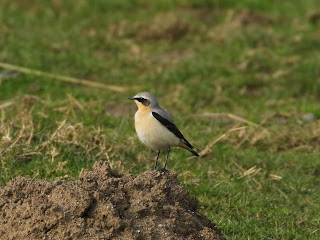 Another returning migrant ringed this week was a male Blackcap with a fat score of 5 ! It was in  my garden at the same time as a Brambling. Both unusual birds in the garden but never before at the same time. 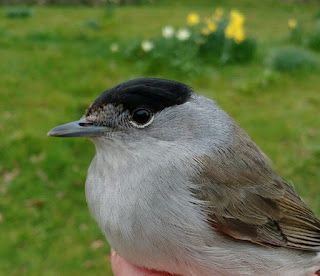 And now we wait for better weather....
Posted by Wendy James at 09:43 No comments:

I'm just back from a trip to the Urra Field Centre in Almeria Province, Spain, where I was helping students studying Ecology & Conservation Biology at Leeds University with some of their field projects. 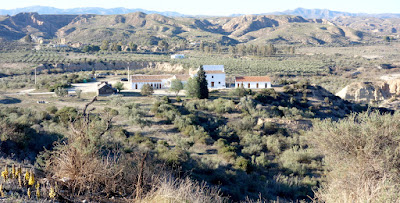 My specific role (assisting ex-pat ringer and external tutor Richard Banham) was to supply birds to two groups of students, a trio of undergraduates whose field project concerned the relationship between feather-mite load and the morphology of the uropygial gland, and a pair of masters students investigating the differences in fat and muscle scores in migratory and resident species (not as simple as you might think - how often do we look at the fat on non-migratory birds?).


Other groups of students were working on flowers, ants, bees, spiders, scorpions, lizards, and so on.

The species providing the bulk of the data were House Sparrows, Sardinian Warblers, Robins and Blackcaps, all of which we were colour ringing as part of other long-term studies... 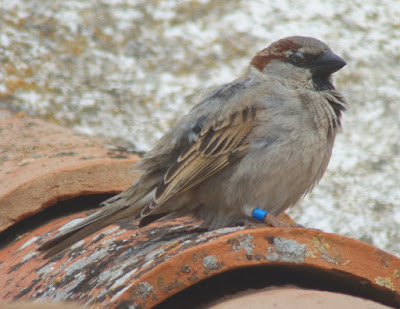 ...but of course there was also a nice supporting cast of other species for me to ring:

My bogey-bird was the Great Spotted Cuckoo, of which there were a pair in the area, but once one of them had managed to escape from a net just before I reached it, they weren't going to be caught again. At least I managed a decent picture of one of them. 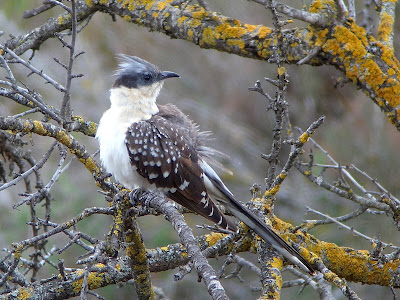 This is very dry country at the best of times - just down the road from Tabernas desert where there was once a thriving industry making Western films such as The Good, the Bad, and the Ugly - and not helped by the extraction of groundwater on an industrial scale for vast new plantations of olive trees. This Spring has been particularly dry there, and there was as well a worrying scarcity of the trans-Saharan migrants that should have been arriving by now. 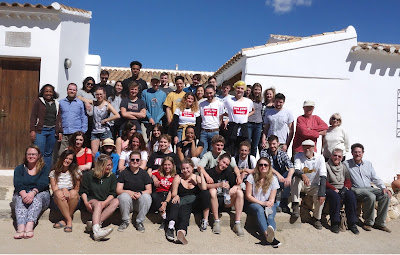