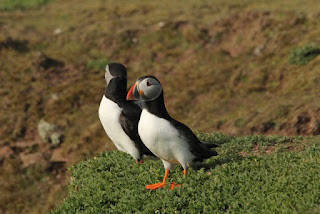 A six part TV series has started about the work and wildlife on Skokholm Island.
Watch episode 2 -
Dream Island
to see our Puffin ringing which we blogged about here last summer. It starts at about 18 minutes. 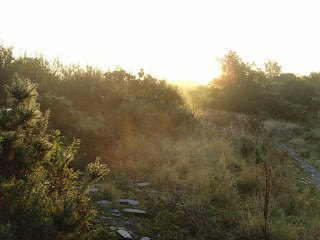 A frosty, misty but welcoming dawn on the Teifi this early morning........

25 new birds and 8 retraps. The warblers still moving included, 4 Reed Warbler, 5 Blackcap, 5 Chiffchaff, also 1 Cettis and 3 Goldcrest.
We wonder if any eastern birds may penetrate this far west overnight............?
Meanwhile from the west this Semipalmated Sandpiper on the Dyfi caused the Ringing Group to migrate north for the afternoon......see Ceredigionbirds for more.. 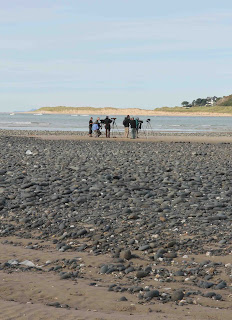 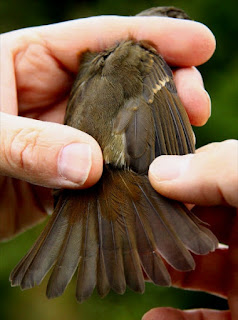 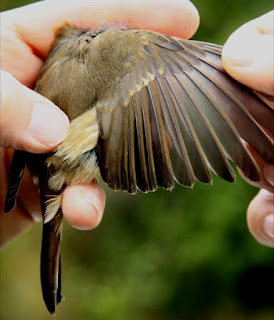 We also retrapped her...as a  4F this 21st July.
Some new warbler numbers from Sat/Sunday...
27 Chiffchaff, 10 Blackcap, 1 Sedge, 1 Reed, and 2 more Cettis.
We are having a great run of new Cettis  !
To add to the variety of the week-end, 5 Dunlin ringed last night on Newport beach.
Posted by Richard Dobbins at 14:54 No comments:

Wendy and Dawn had a productive time after I left Thursday morning, helping the total to a respectable 37 new birds including, 15 Blackcaps, 11 Chiffchaffs, 1 Cettis, 2 Reed Warbler and a Sedge Warbler. 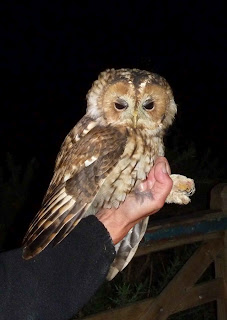 Finishing off a short session this evening, of mainly Chiffchaffs and Pied Wagtails, we found this fine chap in  net 1 ! 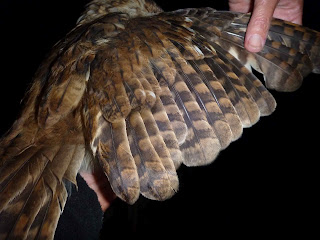 This an adult male Tawny Owl, aged on the lack of a thin terminal bar on the flight feathers, he also is in active secondary moult. Sexed as a male on wing length and weight. What will tomorrow bring...........
Posted by Richard Dobbins at 22:46 No comments: 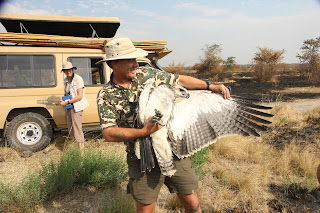 Unfortunately only via a PowerPoint presentation though! 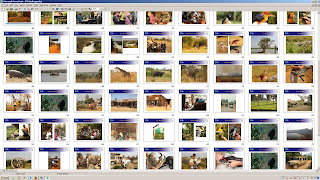 Our autumn talks to local groups have started. The digital projector we bought with a grant from Environment Wales has been invaluable. Not only does it help us to inform and excite others about the BTO ringing scheme and our activities locally and abroad but it is a good source of income to buy equipment for the group.
We offer talks that are tailored to suit the audience and are open to suggestions. We have one about our trip to Uganda and another about bird ringing in general with information and stories about the groups activities locally which has already been well received by several groups.

More bookings gratefully accepted if anyone knows of a group who would like a talk.(Contact us via the form below)
Dates for your diary of talks open to anyone
18th September  Cardigan Castle Autumn lectures, Ty Castell, Cardigan.
17th October  Bird Ringing on the Teifi Marshes Nature Reserve at the Welsh Wildlife Centre for the Wildlife Trust of South and West Wales.
Posted by Wendy James at 07:41 No comments:

Whose teeth are these?? 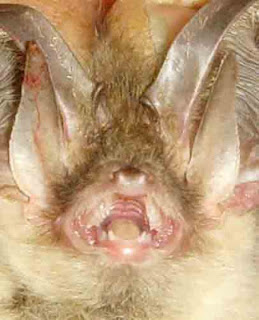 Saturday night, no Petrels at Mwnt but a big hole in the net thanks to this Long- eared bat. Those teeth are sharp!
It was a calm night with the moon not rising for a couple of hours and it looked like the last chance to try for Petrels before the weather broke. As well as Stormies we tried for Leach's too - now that is an odd call!
Unfortunately the sea was empty without even the call of a Manxie to entertain us.
Posted by Wendy James at 18:46 No comments:

Mallard Run closes in the mist..but ponchos out! 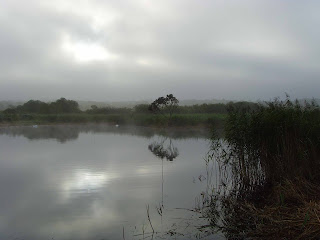 An hour after dawn in the mist on this final morning at the Mallard Run.
Last night only 9 Swallows, see Tony's mid-Wales team's similar story..Ruffled Feathers.. 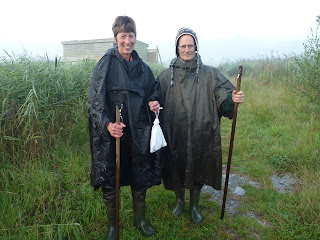 New  ponchos donned  - a practice in the soaking reed-bed for our next major overseas ringing venture....Costa Rica.
Back to this morning's new warblers.....10 Sedge, 8 Reed, 1 Chiffchaff, and 3 Reed Buntings.
Not bad for this date in September, a summary of this poor season will follow in a few days....
Posted by Richard Dobbins at 14:28 No comments:

A Manxie rescue in this first September week too 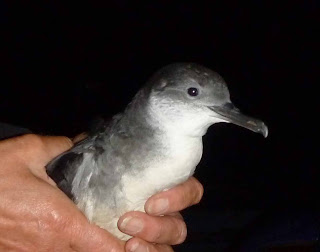 Warblers the target group.........with a few other species too...!
4 Rock Pipits in spring traps on Patch started Sunday off...
1 Manx Shearwater on Monday, a post breeding season bonus, picked up in the road  - unharmed and handed to us.
White Wagtails among the Pied Wagtail and Swallow roost as we prepare for our early mornings...
Warbler species;-
1 session in Mallard, a few starts in the CES scrub...All mornings before work or evenings after...but pleasing figures and nice to record what is there.  Last September we were blown out...!
2 Cetti's Warbler
10 Reed Warbler
6 Sedge Warbler
33 Chiffchaff
15 Blackcap
1 Common Whitethroat, 1 Willow Warbler, and 1 Garden Warbler.

The week-end ahead will be our last efforts in the two reed-beds for the season unless.....?
(Rich D)

A Scilly stormie and a Pied Fly goes north to breed.

Storm Petrel -  2661094,
We controlled at our new Mwnt (Cerdigion) site, during our first session there on 13th July 2012. This lovely control...originally ringed as an adult at Deep Point, Isles of Scilly  1st August 2011. Presumably the first Storm Petrel movement of a Ceredigion recovered /ringed Stormie ??

Pied Flycatcher - L927171
Ringed as pullus at the nest box  4th June 2011 in Pengelli NNR. This small colony undergoing a recent resurgence in the last few years. With 39 pulli ringed in the last 3 years, nice to get a recovery already.
Interestingly, controlled as a female at a nest box by North Lancs Ringing Group in Burton Wood, Brookhouse,  Lancs on 15th June 2012.
A  good proportion of our adults are ringed, we presume our own birds, perhaps not, as this bird chose to go 267km further north to presumably breed  in her 1st year ?
Posted by Richard Dobbins at 09:46 No comments: