This Autumn, the Tits have been on some local adventures, with Blue Tits making the sea crossing to three Pembrokeshire Islands, Skomer, Skokholm and Ramsey..... an unusual event !!

We have had a few Great Tit movements over the years, the furthest being c100km.
This Autumn we have controlled a juvenile ringed by the Pembs Ringing Group at Kilpaison Marsh in the south of the county, and bizarrely they have controlled a Blue Tit from ourselves on the Teifi.(53km)
To complete the season to date..the Pembs RG  have also had a juvenile Great Tit to Tenby (23km) and a juvenile from Rhandirmwyn mid Wales to Kilpaison Marsh (98km). 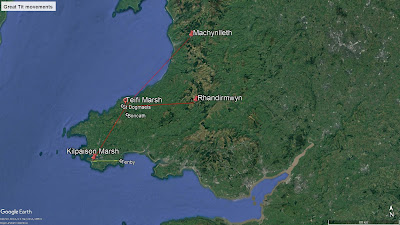 Cetti's Warblers were first recorded breeding in both the Ceredigion and Pembs sides of the Teifi Marshes in the early 1970's. - Unbelievably at the same time as the Reed Warbler started breeding in West Wales. 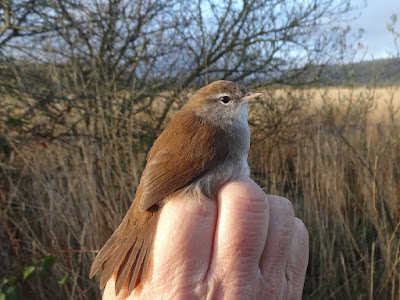 The Cetti's from Farlington Marsh.

Though ringing of Cetti's including a colour-ring project took place during the 1990s I am not aware of any  movements involving Teifi Marsh birds until recently. 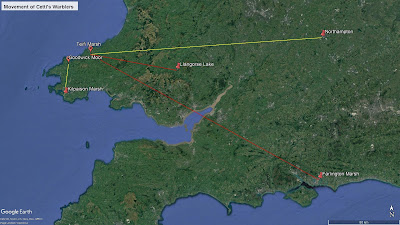 We have ringed 152 Cetti's Warblers on the Teifi Marshes since 2008 and we have 2 controls, a bird from Llangorse Lake in Powys and a bird from Farlington Marsh in Hampshire.
We also have a  recovery of a Teifi Marsh bird in Northamptonshire and now our latest recovery from our new ringing site Goodwick Moor at Fishguard to the south of  the county, Kilpaison Marsh near Rhoscrowther.

With 39 new Cetti's Warblers ringed this year, 10 of which were ringed on Goodwick Moor by Karen we are looking forward to further movements as the population expands. Our current oldest bird was ringed in 2014 and has been recaptured each year since.
Posted by Richard Dobbins at 17:38 No comments:

We have been ringing Pipits on the Teifi estuary since since September 2010...
Totals to date...Rock 86, Meadow 34 and today we added Water Pipit.
As time passes the estuary is changing and their old feeding haunt of the Patch spit is disappearing.This morning Wendy, Chris and I went to the area currently favoured by the Pipits 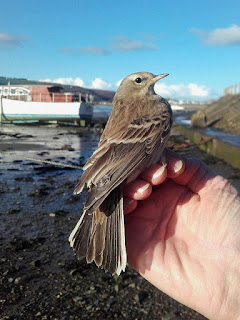 This Water Pipit was feeding with the Rock and Meadow Pipits and was one of 8 Pipits caught along with 2 Meadow and 5 Rock Pipits.

We have only had same winter recaptures of Rock Pipits and we rarely see ringed birds during the breeding season. A great surprise this morning with recapture of 2657817.. 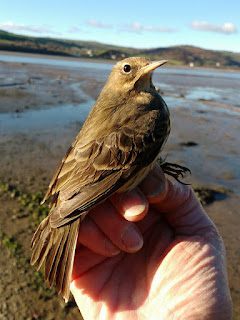 Ringed 6th October 2010, one of 11 Rock Pipits ringed that morning by Wendy and I on only our 3rd ever session trapping Pipits.

We have no recaptures of Meadow Pipits from the Teifi. We have a recapture of 349 days at one of our upland Woodcock wintering study sites near Boncath, and a 3yr 350 day recapture at Mwnt, one of our migration monitoring sites.

Recent recoveries, and the Woodcock season ahead.

We have received details from the BTO of three recoveries on Skokholm of Storm Petrels ringed at our Mwnt site this summer. 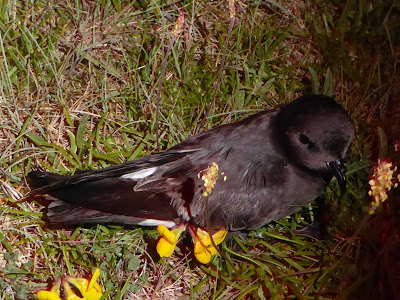 This raises some questions. Are the birds we capture at Mwnt from the Skokholm population though we don't see obvious signs of breeding, or non-breeders roaming the Irish Sea whose origins may be from further afield ?
Some questions might soon be answered as interesting research is going on at Cork University in Ireland with trackers on Storm Petrels. This has shown that they forage considerable distances up to 330km from their breeding colony. A map which illustrates this by Dr Adam Kane was on Twitter from a recent Irish Ornithological Research Conference...
Storm Petrel foraging

Other news this week from the BTO was the original ringing details of a Reed Warbler with a Jersey ring that we caught on the Teifi Marsh on the 30th July this year.
Not ringed on Jersey but.... 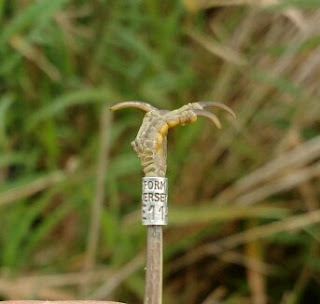 It had been ringed at Longis reserve on Alderney on 18th September 2016.

The French ringed bird, a typical movement. The Belgian ringed bird is probably our oldest Sedge Warbler, though no doubt a passage bird. 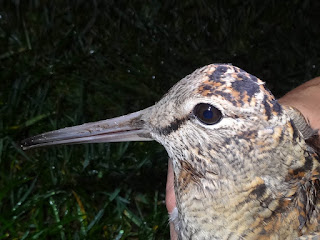 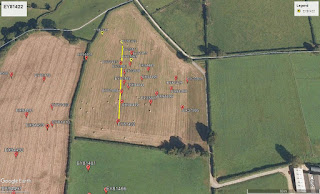 The map above shows our latest recapture.
EY81422 was recaptured two nights ago on the 24th November, ringed on the 15th January 2015.
The two capture sites being 150m apart, showing the usual wintering site fidelity.

We are in the first few days of the new season. We hope to achieve our 400th capture during the next moon phase and we will be targeting our three main sites Crymych, Frenni and Boncath. The current Woodcock capture totals for each site are 113, 89 and 89 respectively. The three sites have also produced other species captured totalling 188 birds, a combination of mainly Golden Plovers, Snipe, Fieldfare, Redwing, Skylark, Meadow Pipits and the nicest.. a Stock Dove... 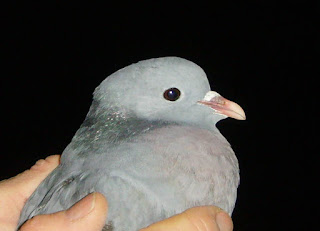 Posted by Richard Dobbins at 23:26 No comments:

I called my last post "Fygyn..... developing a new ringing site". I thought this time I would summarise the results from both my sites Fygyn Common and Ffynnon Gro for the months of September and October.
This year I have had fewer ringing sessions abroad and have had more time to ring at Fygyn Common in particular, the months from August to September producing some interesting birds and caught some new birds for this site as well.

The highlights of the ringing sessions at Fygyn Common were:- 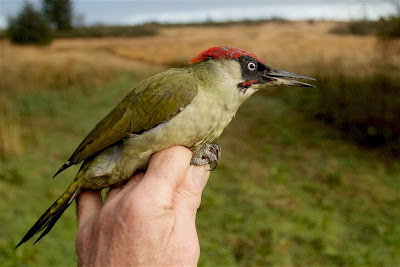 The Green Woodpecker was a first for Fygyn Common and a new bird for me. It was totally unexpected even though I have seen a number of them about and have investigated with ringing friends and on the internet the best way to catch them. Within a few days of each other I also caught a male Great Spotted Woodpecker from my garden site at Ffynnon Gro 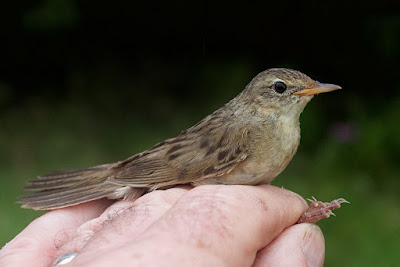 This year has been the best since I started to ring at Fygyn Common for Grasshopper Warblers. The first to be caught was on 20/04/17, in total 12 birds were ringed 6 juveniles and 6 adults.
I strongly suspect they have been breeding at the site. 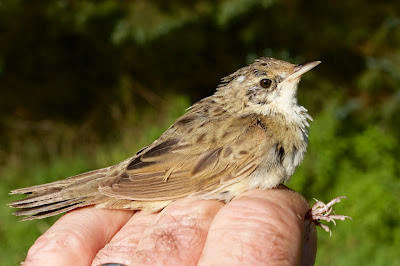 The last bird caught was on 02/09/17 and was this scraggy looking adult above and as with some of the other birds they were probably on migration passage. 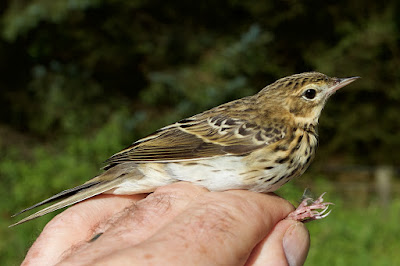 Not big numbers but 6 Tree Pipits have made a presence again this year, all juveniles. Again probably have bred on the site. They were first heard calling by Karen Meatyard from the Teifi Group in late Spring when she came to ring with me. 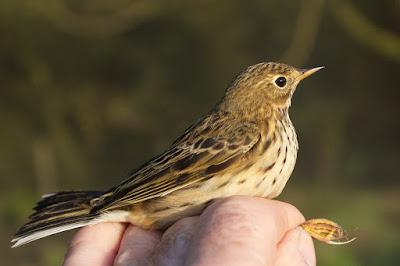 More success with Meadow Pipits. They started to arrive in late August and increased in numbers and 115 being caught for September and October. The last bird caught was 30/10/17 and brought the total to 151 birds this year. 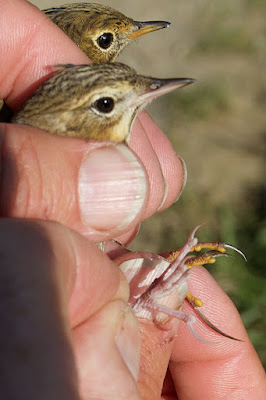 This picture just gives you some comparison between a Tree Pipit and a Meadow Pipit
Tree Pipit claw 6mm - 9mm, Stronger supercilium and bill is thicker and stumpier
Meadow Pipit claw 10mm - 13mm, weaker supercillium and the bill is finer. 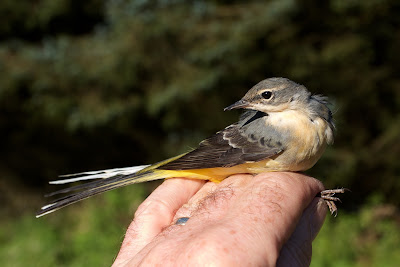 First for the site this Grey Wagtail 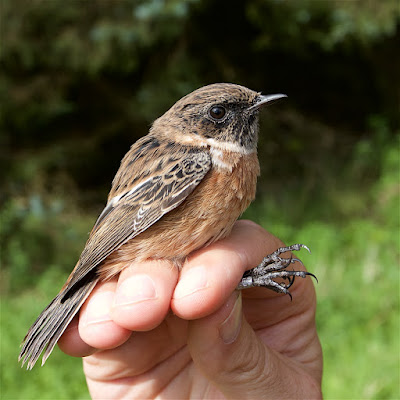 My first Stonechat was caught in 2013 in a spring trap, many attempts since then has caught Robins but no more Stonechats but 2 birds were caught in mist nets this year, the one above in September.


The highlights of the ringing sessions at Ffynnon Gro were:- 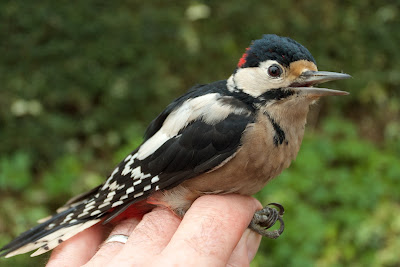 This male Great Spotted Woodpecker caught on 28/10/17 was a juvenile,  looking closely at its head you can still see some red juvenile feathers that have not moulted. 3 new Mistle Thrush have been caught in October which brings the total to 4 birds for this year and a total of 7 birds for the site. 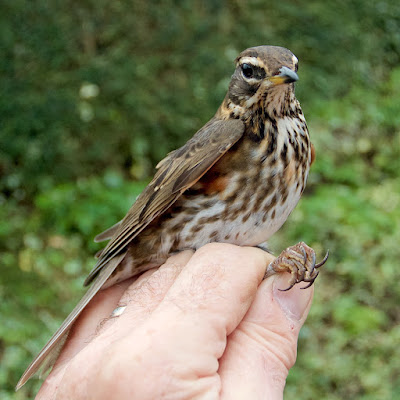 Redwing, regular every year have shown up in bigger numbers with a total of 78 new birds, site total this year being 151. All the birds have been caught in my High Flyer and still birds fly over the top of the nets. Another project coming on I think.

Many thanks to all members of the Teifi Ringing group that came along to help this year and especially the last couple of months:- Karen Meatyard, Dawn Jay, Arfon Williams, trainee's Molly Heal, Andrew Hughes and Katie Dix. Their presence has given opportunities to increase the number of nets used and experiment netting arrangements in new areas. I enjoy their company and it's nice to have like minded people ringing with you.

I am looking forward and hoping that I may have Firecrest and YellowBrowed warbler this winter. Goldcrest have started to show on Fygyn Common. Woodcock and Snipe have also started to arrive, so catching any of these species would be special.

Posted by Charlie Sargent at 22:41 No comments: