Keeping on top of things

Condidering that the Jackdaw population of St Dogmaels must be somewhere in the high hundreds, if not more, and that over the past five years or so I've been very restrained and only ringed 27 of them, I was quite suprised to see this pair when I looked out of the window this morning. (Photo not the best since there was double-glazing in the way). 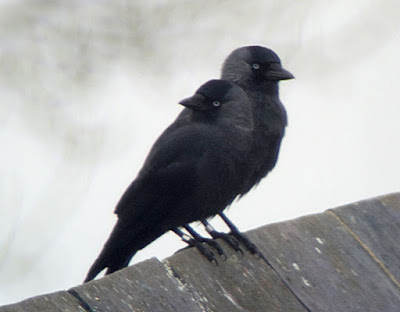 We started ringing Linnets at Mwnt in April 2016, and had trapped 1240 birds without encountering any ringed elsewhere; until last week that is, when we met our first ringed bird that hadn't been ringed by us.  Considering that so few are ringed elsewhere in Wales each year, I had high hopes that this bird might support my suspicion that our substantial wintering population is almost entirely separate from our breeding population, and may come from somewhere further North than Beaumaris.

While waiting over the weekend, I did some concentrated number-crunching, and ended up with a plot comparing original ringing date with the number of days to our subsequent recapture of the same bird. I was very gratified to find that this plot, although a bit gappy for reasons outwith our control, entirely supports the impression I'd got: the breeding population disappears almost entirely in about mid-October, to be replaced by a wintering population that arrives at about the same time and itself disappears by about mid-April, while the breeding population has been re-appearing since about the end of March (and showing signs of having been somewhere hot enough to bleach their feathers).  I'll produce a refined and annotated version of this plot in due course. 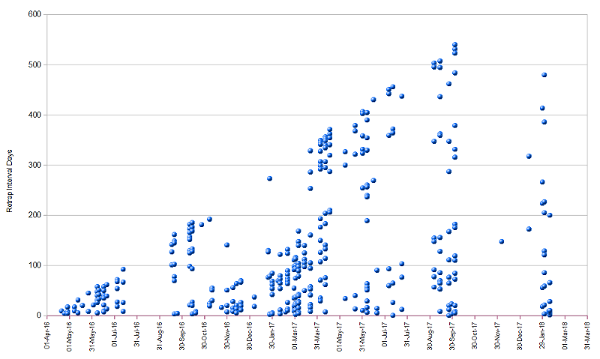 Today we received details of our 'control', ringed as a juvenile at the beginning of August last year on South Uist in the Outer Hebrides, 600km from Mwnt. This is a genuinely exciting moment in the project, and inspires us to go forward with increased effort, if that be possible. 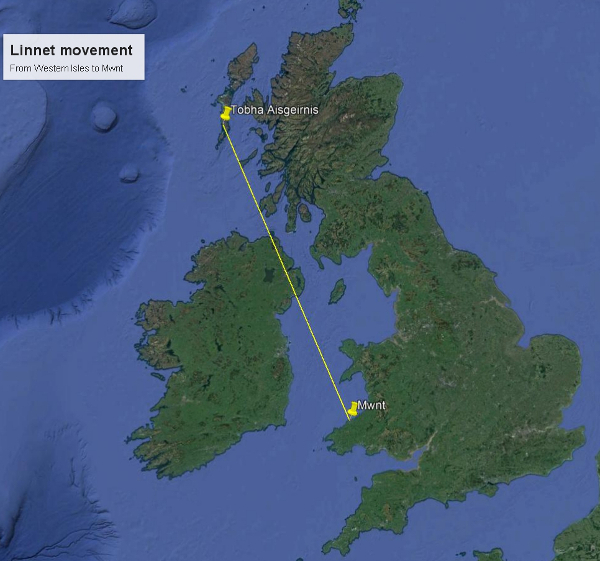