A Siskin caught in my garden on the 6th January was ringed on 12th October 2015 in Killearn, Stirling. 441km, 86 days. This is the furthest movement north as the map showing our other Siskin controls and recoveries demonstrates. 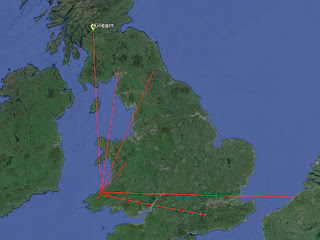 Credit to the BTO for such quick news about recoveries now.
Siskins leave us in June/July and don't start reappear until January so we are adding to the picture of where they go.

Looking back at last year, our blog at the same time was also about Siskins.
Siskins.. wandering residents, breeders and RAS

An update from that blog about RAS - enough adults were retrapped in Richard's garden during the breeding season to make a viable RAS. 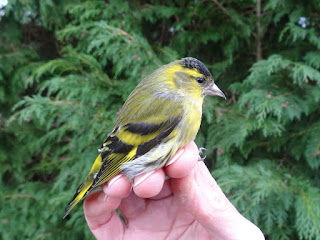 Other birds caught this month include an increasing number of Goldfinch, a couple of Lesser Redpolls and a bird not often caught in my garden, a Treecreeper (and yes, that is a photo in January taken on the 13th with daffodils already out!) 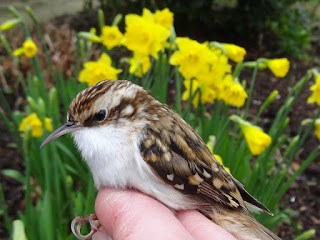 Our lamping has slowed down while the moon is bright but this month we have ringed Woodcock, Skylark and Fieldfare. Very few Golden Plover have been seen - on fields where we would normally see around 50 we have been struggling to find one or two. Maybe this cold weather will cause some movement to us.

Have a look back at our year of ringing with 2015 totals and 2015 recoveries and controls now added on the right side of the blog.