Home....and over to Midland Island Shags 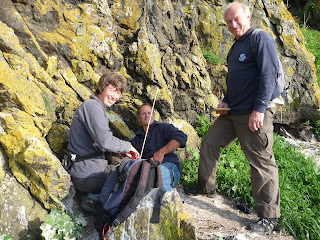 ...... this evening Shag ringing with Skomer Island staff, and Steve with the Pembs RG. The total number ringed and productivity from Steve later. The visit was also an opportunity to see and ring some of the other seabird life. 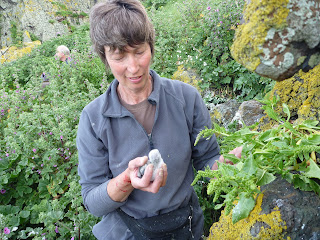 Wendy with a very young Razorbill too small to ring. 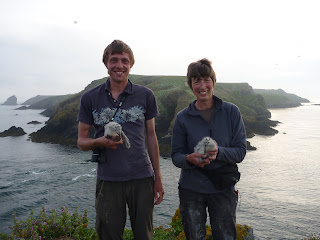 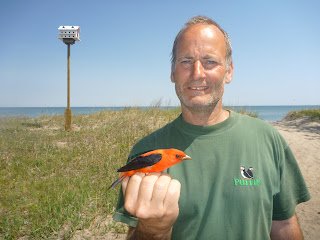 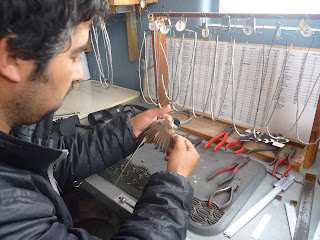 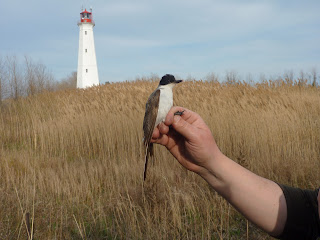 Posted by Richard Dobbins at 01:31 No comments:

The smell of Cormorant lingers on my pliers after a trip to St Margarets Island to ring nestling Cormorants with the Pembrokeshire Ringing group.
Read Paddy's account of the day on their new blog.
Today it was back to little nests with a check of nest boxes in Pengelli Forest. It is looking good for successful Pied Flycatcher breeding again with four boxes being used. The rest had broods of Blue Tits and Great Tits of varying ages..... 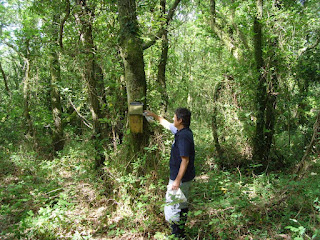 One had a Wood Wasp nest... 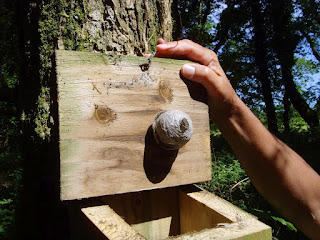 but the biggest surprise was to find a Dormouse nest in one.
Pengelli forest has the largest population of Dormice in Pembrokeshire but the 130 boxes are in a different part of the forest to the bird boxes.

CES 3 this weekend was the quietest CES we have ever done in 3 years. With 830 feet of nets through reed bed and scrub we only ringed 10 new birds and 18 retraps over 6 hours!

Richard is on his way back from Long Point Bird Observatory tonight - be prepared for stories of his achievements  - not content with the Least Sandpiper last week, he went on to catch a Least Bittern! 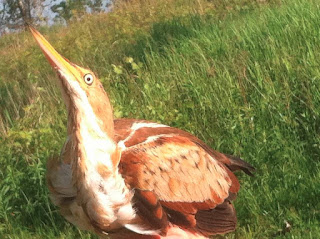 Teifi swan killed by a golf ball in Llanelli! 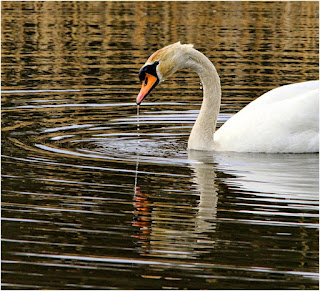 An interesting local story on the BTO blog ...
A Mute Swan, ringed on the Teifi in 2000 as an adult, was struck and killed by a golf ball while flying low over Machynys golf course, Llanelli, yesterday!

Meanwhile another Mute Swan of similar age is still alive and well on the Teifi. Z97987, ringed as a nestling by Tony Cross in 1998, is regularly spotted at various locations along the river.

The passage of Greenland Wheatears seems to be slowing now but we took the spring traps to Patch (Teifi estuary) to catch those that were around the rocks on the last two mornings. 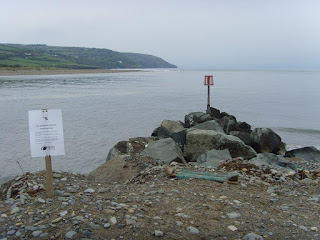 Yesterday, a 100% catch rate ( albeit only 3 /3 ) and today 1 out of only 2 Wheatear seen. That was a female Greenland with a fat score of 4 and weighing 40.3g so well prepared for the next leg of its long migration.

There were a few waders about including Dunlin, Ringed Plover, Sanderling and Whimbrel so it is a good spot to do some birdwatching while waiting.
Meanwhile Richard, who is still in Canada, caught a very special wader this week - a Least Sandpiper weighing only 19.7g!

No doubt about where our Sedge Warblers go.....

News of three foreign recoveries of our birds this week and all were juvenile Sedge warblers that had been caught in Tour aux Moutons, Donges in the Loire-Atlantique. 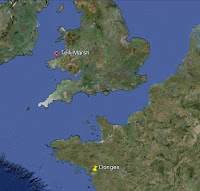 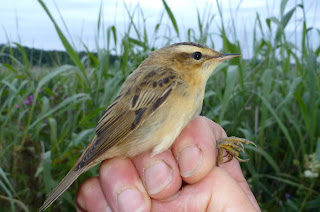 This weekend we did CES 2 and caught 68 on their return migration to start the year off well.
Other migrants ringed included Blackcaps, Willow Warblers, Chiffs, Garden Warblers and a Reed Warbler. Surprisingly few resident birds were caught and still no juveniles.

Richard is still ringing at Long Point Bird Obs in Canada and his latest highlights this week are catching a Bonapartes gull and a Spotted Sandpiper. Some good warbler days too with over 400 birds of 43 species.Dawn and I groaned when we heard about 74 Rose-breasted Grosbeaks in one day though - a painful memory of those vicious beaks and claws! 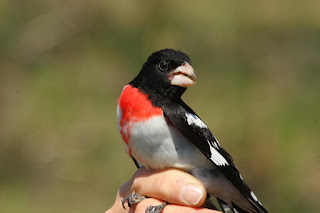 Some good retraps yesterday to start our 4th CES season.
Returning migrants included a Garden Warbler ringed on the reserve in May 2009, a Blackcap ringed in 2010 and a Reed Warbler that was ringed as a juv last July.
Resident retraps included a Dunnock who still is not net shy having been caught 16 times since it was ringed in Sept 2008!
The first bird out of the net was not a CES species but rather nice all the same - this Jay certainly made himself heard. 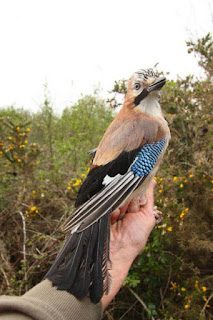 Other species of the 40 ringed included a Lesser Whitethroat, 2 Whitethroats, 8 Blackcaps 7 Sedge Warblers and a Reed Warbler.
For the first time since we started doing CES it was not possible to put up the full 830 feet of nets.The water level in the reed bed is higher than we have ever seen and even with waders it was not feasible to put up the 4 x 60ft nets in there. Even one of our net rides which is usually only a bit muddy was under water at high tide. 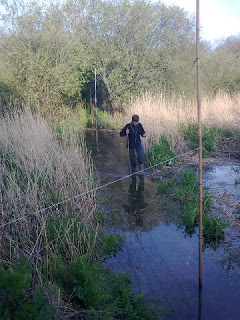