82 birds for CES 6, 61 new and very surprisingly only 21 retraps.
Plenty of juveniles including our first capture of 2 Redstarts in a CES session. 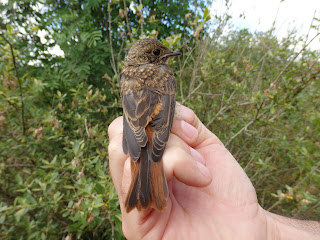 Other first juveniles for the year included 3 Garden Warblers, 3 Reed Warblers, Treecreeper and 2 Goldcrest.
The group is growing and nice to have involved today Nia, the Teifi Marsh reserve People and Wildlife Officer, Dai Stacey and Andrew Hughes. 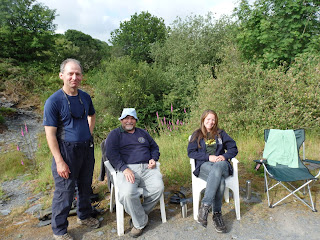 All three regularly visit and work on the Welsh Islands, from north to south, Bardsey, Ramsey, Skomer and Skokholm. See our post below for our recent visit to Skokholm. Useful to be able to share our island experiences of volunteering and management. 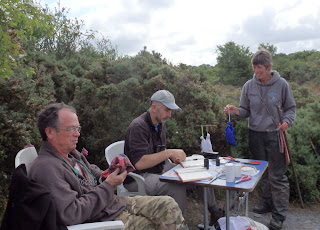 Not only the trainees do the work !

Posted by Richard Dobbins at 15:54 No comments:

A week on Skokholm..

Fitted in between CES 5 and 6, two of us spent a week on Skokholm ringing and counting birds.
Although very quiet for migrants in June, we were able to help with the long term seabird projects.
Just a brief summary of the work here but for a more in depth look at  the daily work on the island follow the excellent Skokholm blog which is updated daily.

Juvenile Wheatear were appearing in increasing numbers during the week and we ringed a few from the 13 pairs. This one was along the track to the light house. 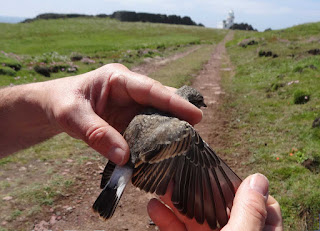 Most of the Great Black-backed Gull chicks were a good size for colour ringing. This is an important part of a study looking at juvenile survival, dispersal and recruitment into the breeding population. Over 25% of the chicks colour-ringed last year were resighted in Cornwall. 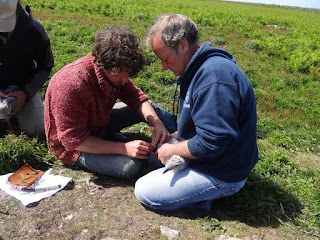 Waiting for glue to set on a numbered colour ring... 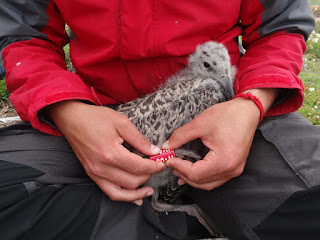 Along the lighthouse track, a study transect was established in 2013 where Manx Shearwaters are ringed and retrapped to look at adult survival and recruitment of juveniles to the population.  Many visiting ringers find this nocturnal activity to be the highlight of their stay. Visitors to the island are invited to join the ringers and find it fascinating to see this secretive bird in the hand and to learn more about them. 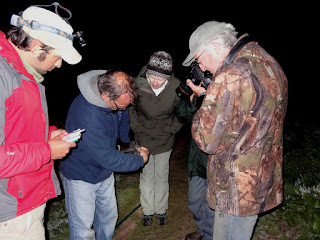 Work in the Manx Shearwater study plots - there 193 study burrows which are natural burrows with a slab over the nest chamber to allow easy access. These are visited early in the season to see which adults have returned to the colony. All burrows where an egg is produced are then monitored to see what proportion of pairs fledge a chick. 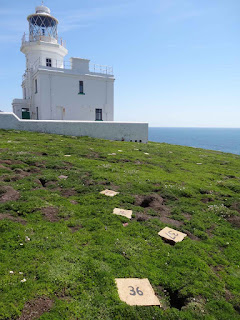 We checked out the last few unknown partners in occupied burrows. 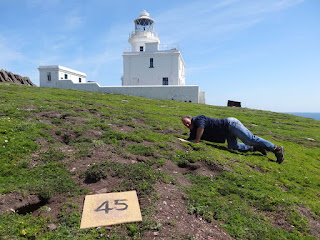 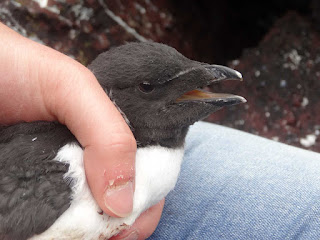 A day of nips and scratches and crawling around in guano! 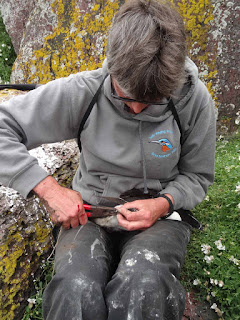 Razorbills carry ticks and a search after the visit to the Razorbill colony was justified as one was found firmly attached! 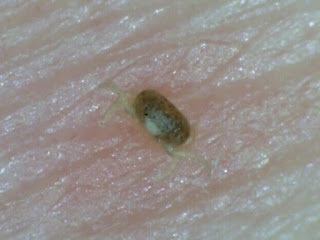 A visit to Skokholm a week earlier last year was busy with ringing Oystercatcher chicks. This year they are later and we only ringed one, though many more will be produced from the 40 pairs. 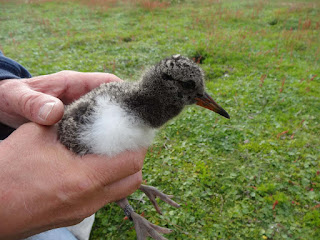 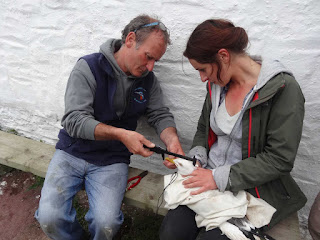 The Skokholm annual report is well worth a read for a detailed insight into the work on the island.
Skokholm Annual Report 2014
Posted by Wendy James at 11:01 No comments:

A visit to our nest boxes today to ring the pulli.
In Ffynone wood just one box was used by Pied Flycatchers. 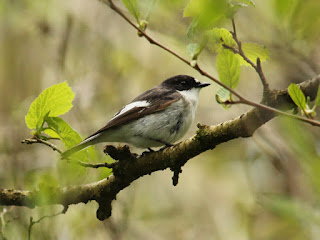 All 6 eggs hatched but for some reason, maybe bad weather, only 3 were alive today. 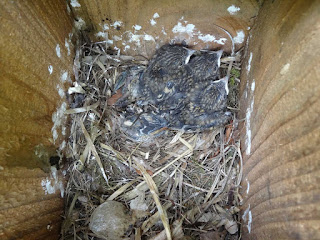 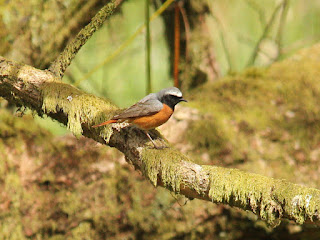 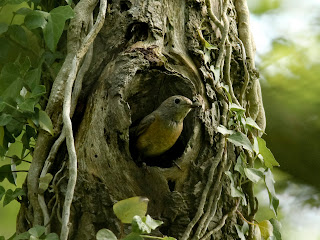 6 Redstart pulli were ringed, their red tails making no doubt about the identification! 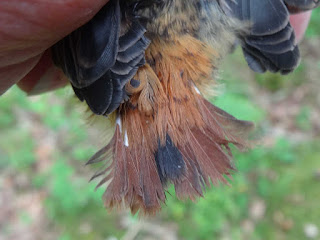 A disappointing year for Pied Flycatchers in our North Pembrokeshire woods but every successful nest is a bonus as we are right on the limit of their range in Wales. Excellent distribution maps illustrating this can be viewed on the BTO Atlas mapstore