April always sees a huge number of White Wagtails roosting on the Teifi marsh on migration, as many as 250 some nights.
Once again this evening we were out by Mallard hide ringing a sample of them. 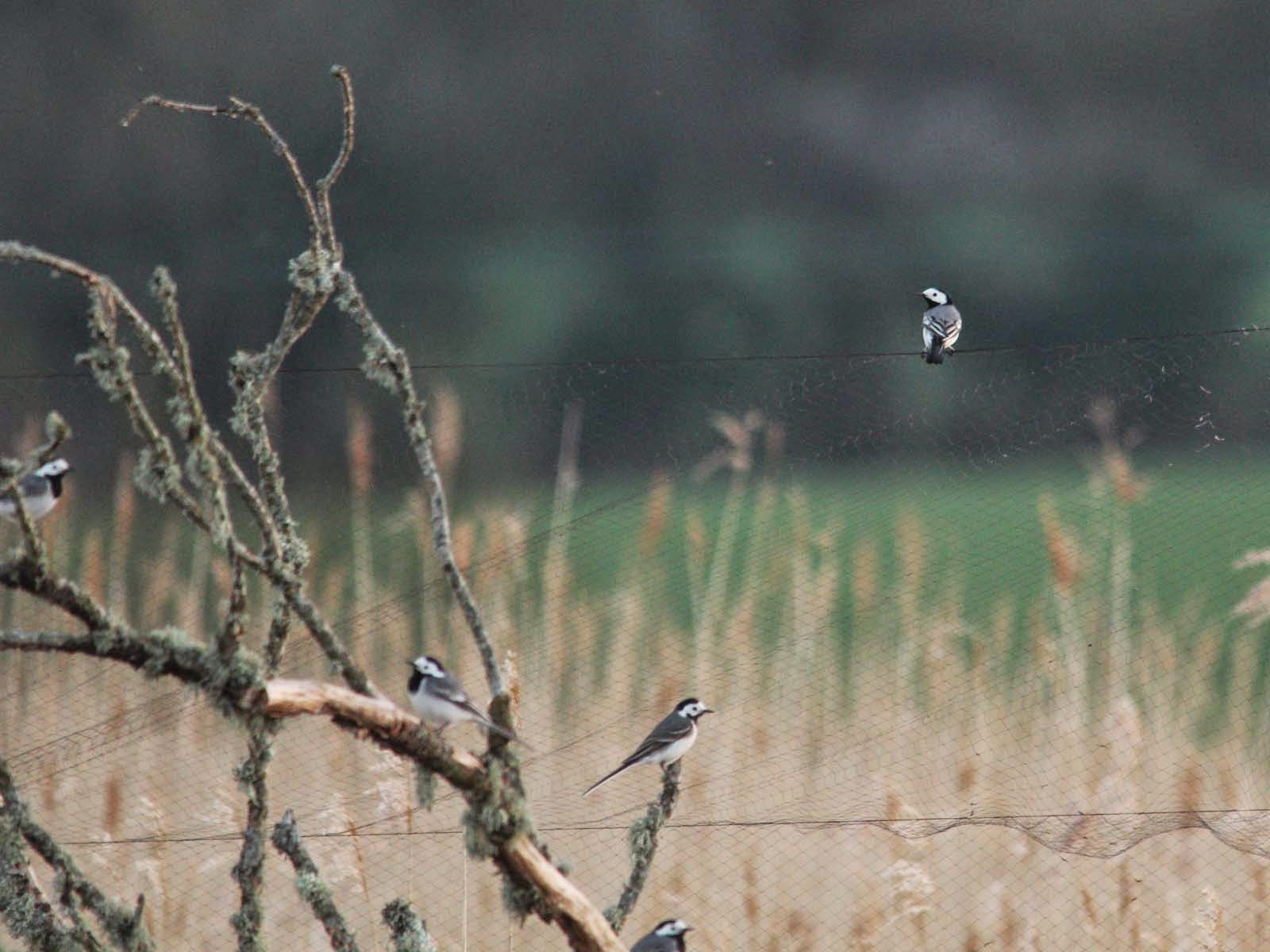 A familiar site with them sitting on the nets, guys and poles not in the net!
Only 11 caught tonight before a Sparrowhawk moved all the wagtails and Hirundines away from that area of the reed bed.
A star bird though was already ringed. A quick check on the data base on my phone (and also looked up by Richard on his phone at Long Point Bird Observatory in Canada!!) confirmed that it was a bird ringed by us one year ago almost to the day, 16th April 2014. 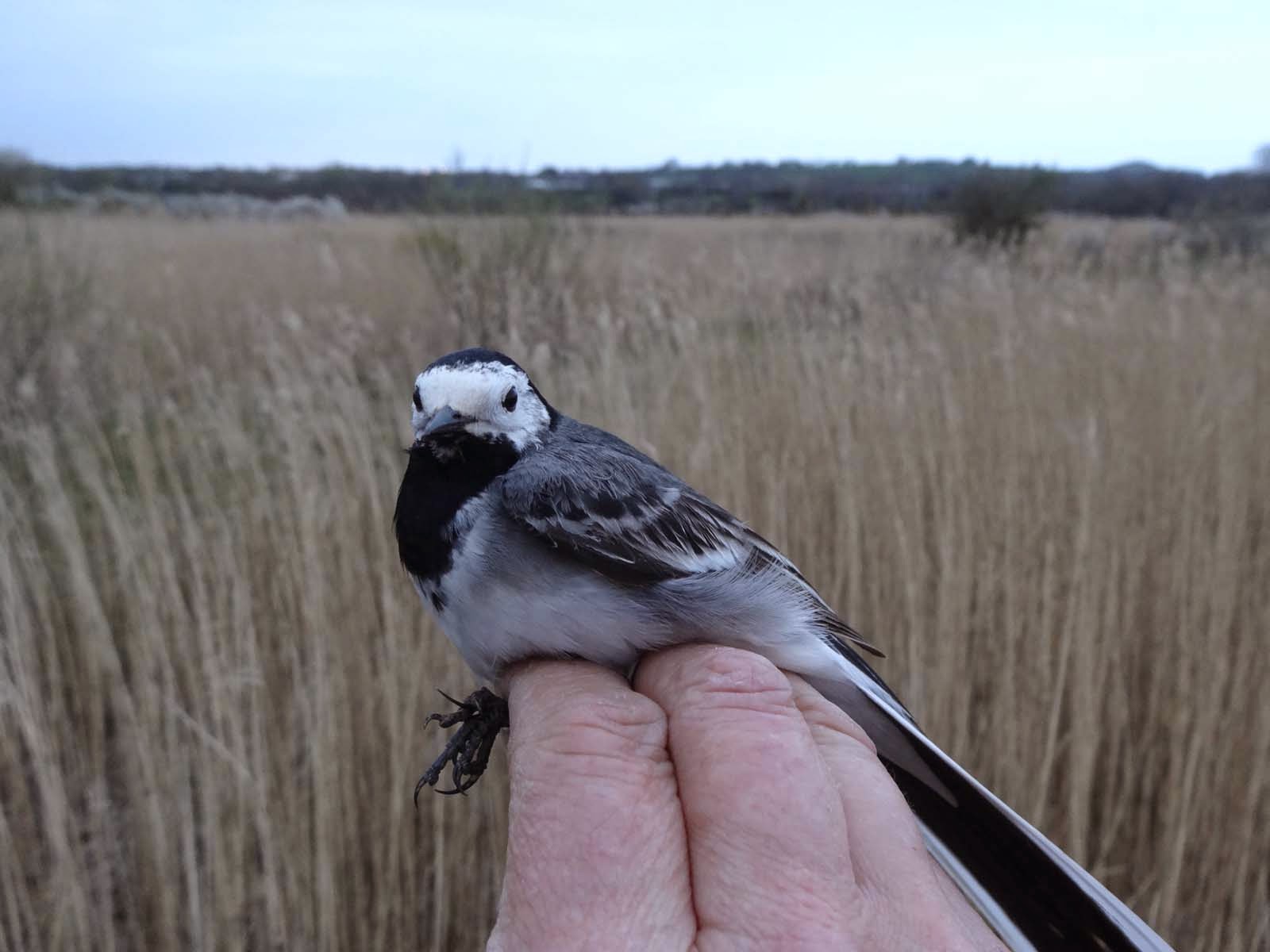 Another White Wagtail ringed the same week was later recovered in Iceland in June indicating where our birds are heading.
Known adult birds are always worth taking an extra good look at the moult. 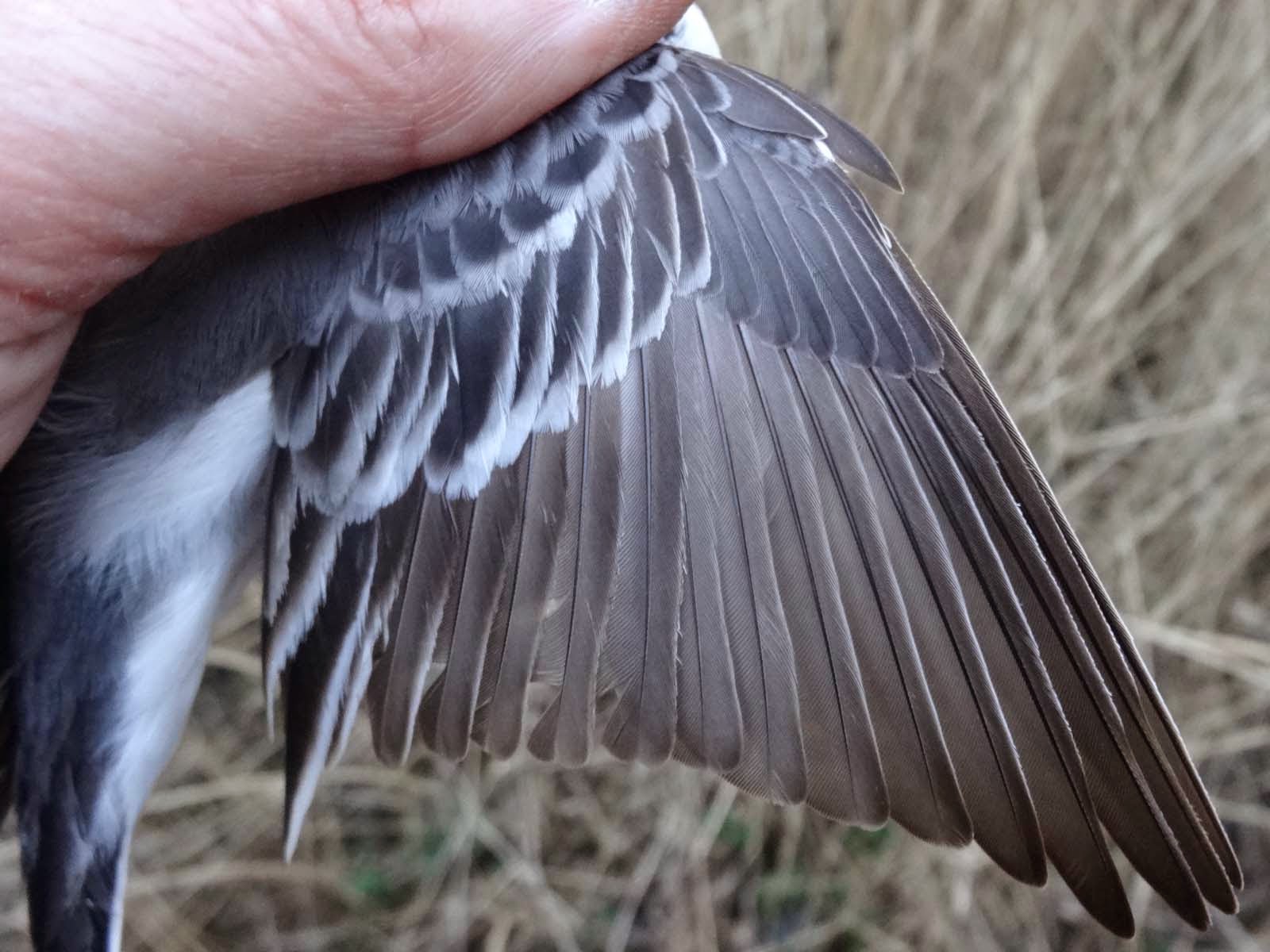 Now we need a bird with a ring on from its wintering ground! It would be fascinating to know where this bird has been.

Footnote: Pub-quiz trivia - the White Wagtail is the national bird of Latvia. (ed.CJ)
Posted by Wendy James at 23:00 No comments:

The last week has shown a shift in the species we are catching as one by one the migrant species return.
A male Blackcap in my garden at the beginning in the week was only the second ever ringed there. This was the same day as big Blackcap migration was noted on Skokholm, Ramsey and Bardsey Islands amongst many other locations. 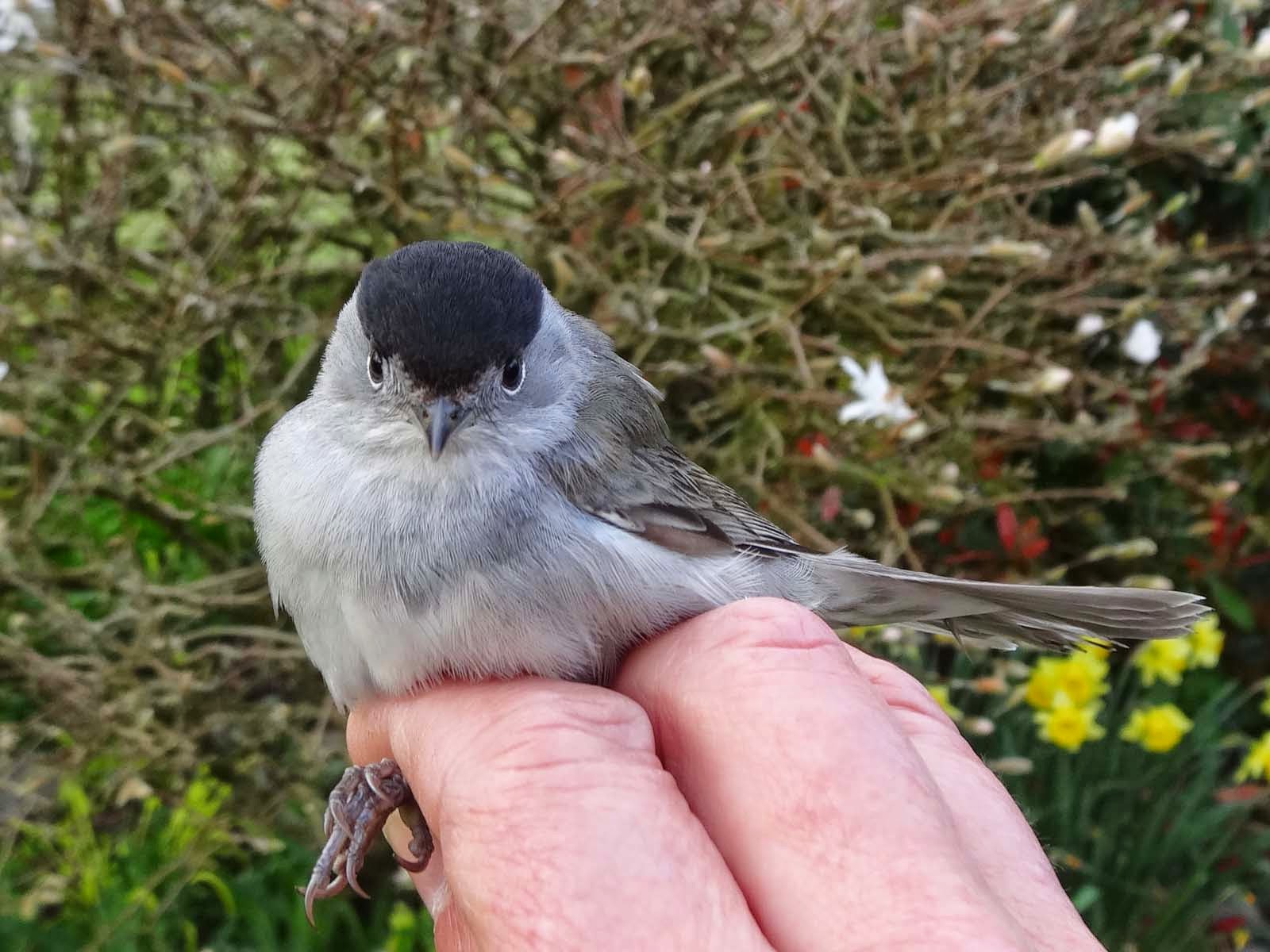 Willow Warblers, Chiffs and Goldfinches added to the variety that day.

In the evenings we have been out on the The Teifi marsh at dusk to catch Wagtails. 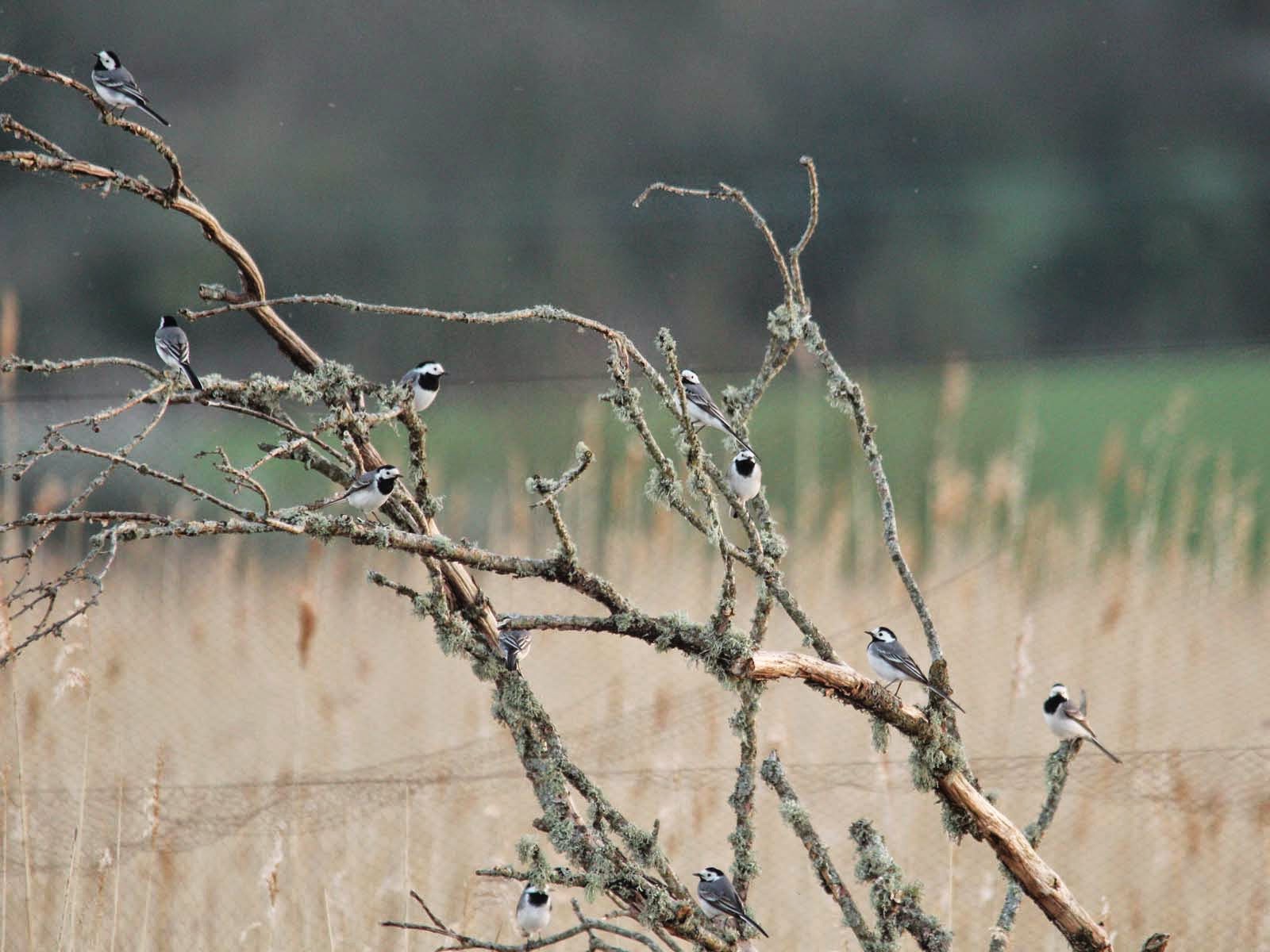 The hirundine roosts have been spectacular with hundreds of birds low over the reeds.
Yesterday evening we ringed 4 species - 13 Wagtails ( 11 White, 2 Pied), 8 Swallows, 7 Sand Martins and the first 2 Sedge Warblers of the year... 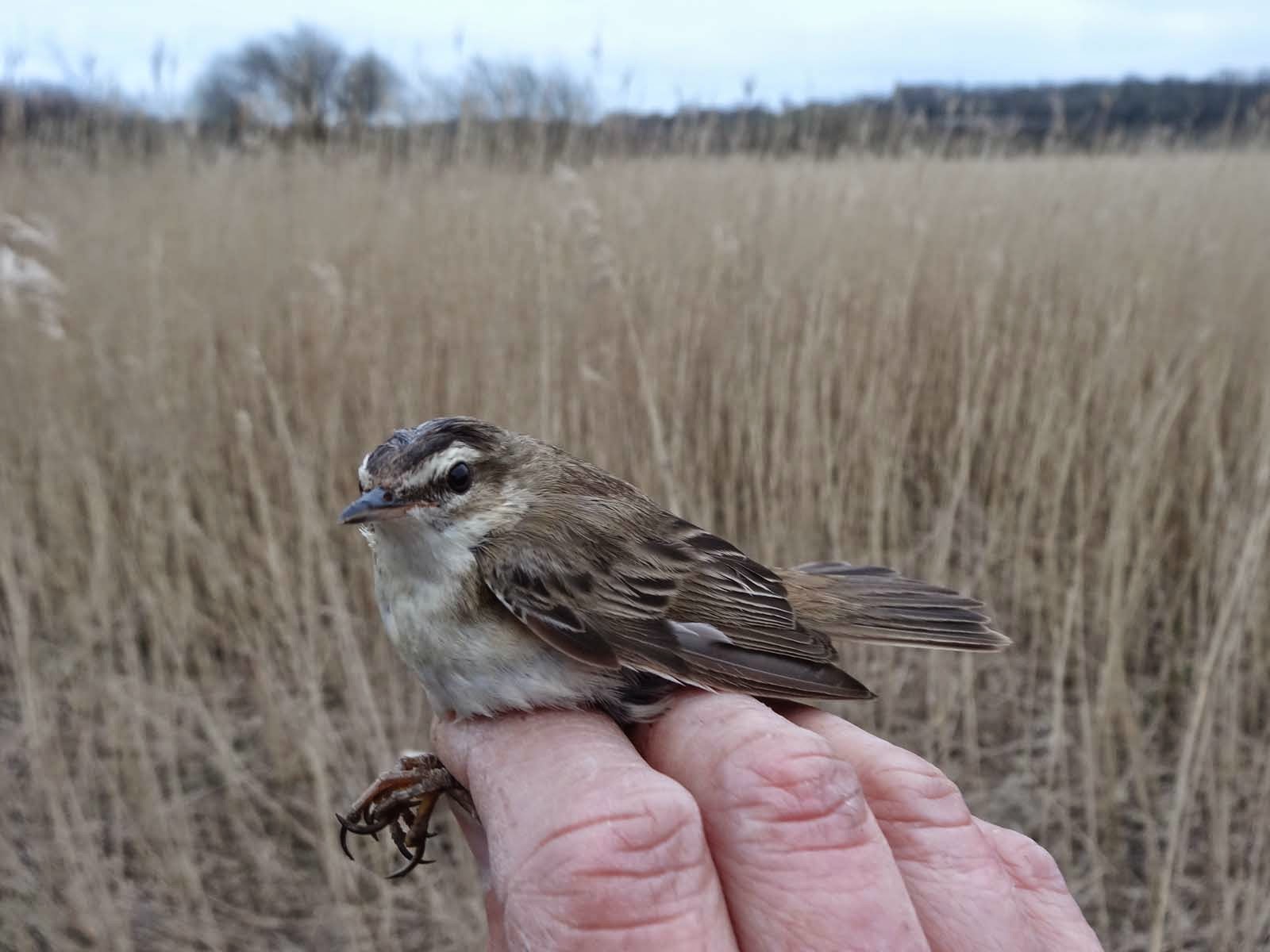 A cold and foggy start on the marsh today saw a morning of quality not quantity including Chiffchaff, a Reed Bunting which was colour ringed for our BTO RAS and a retrap Cetti's Warbler ringed back in 2012.
The first Grasshopper Warbler of the year was special as we didn't ring any at all last year. Usually only two or three a year apart from an exceptional year in 2011 when we ringed 16!
This back view shows the well marked plumage of the Grasshopper Warbler 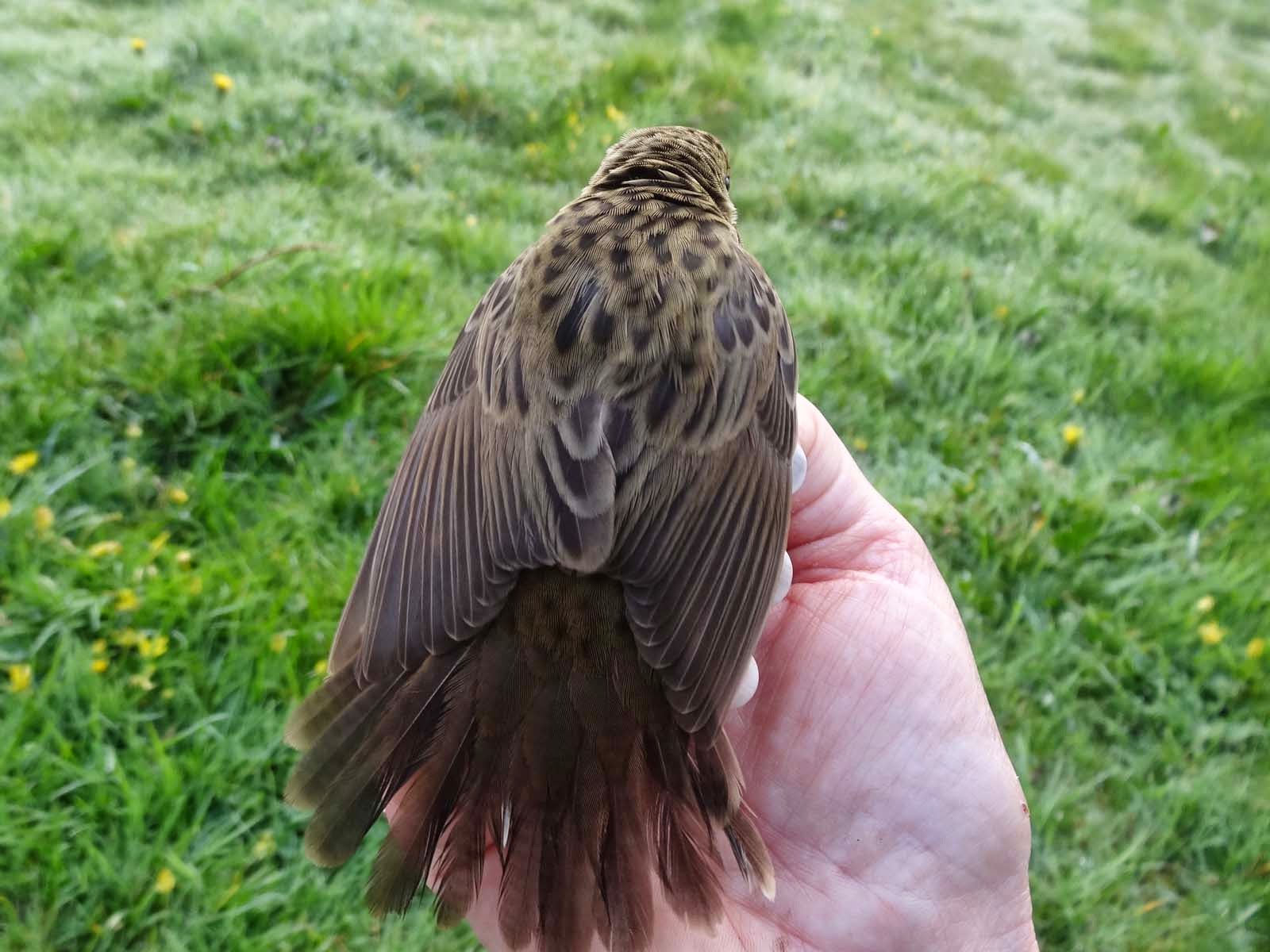 We are still waiting for the first Reed Warbler to return. Maybe tomorrow....
Posted by Wendy James at 21:50 No comments:

Swallows over the fields, Blackcaps singing....What will the Teifi Marshes deliver this evening ?
An Iceland Gull found by Arfon, to start the Spring evening off !
250 alba Wagtails around the Mallard Pond to roost.. 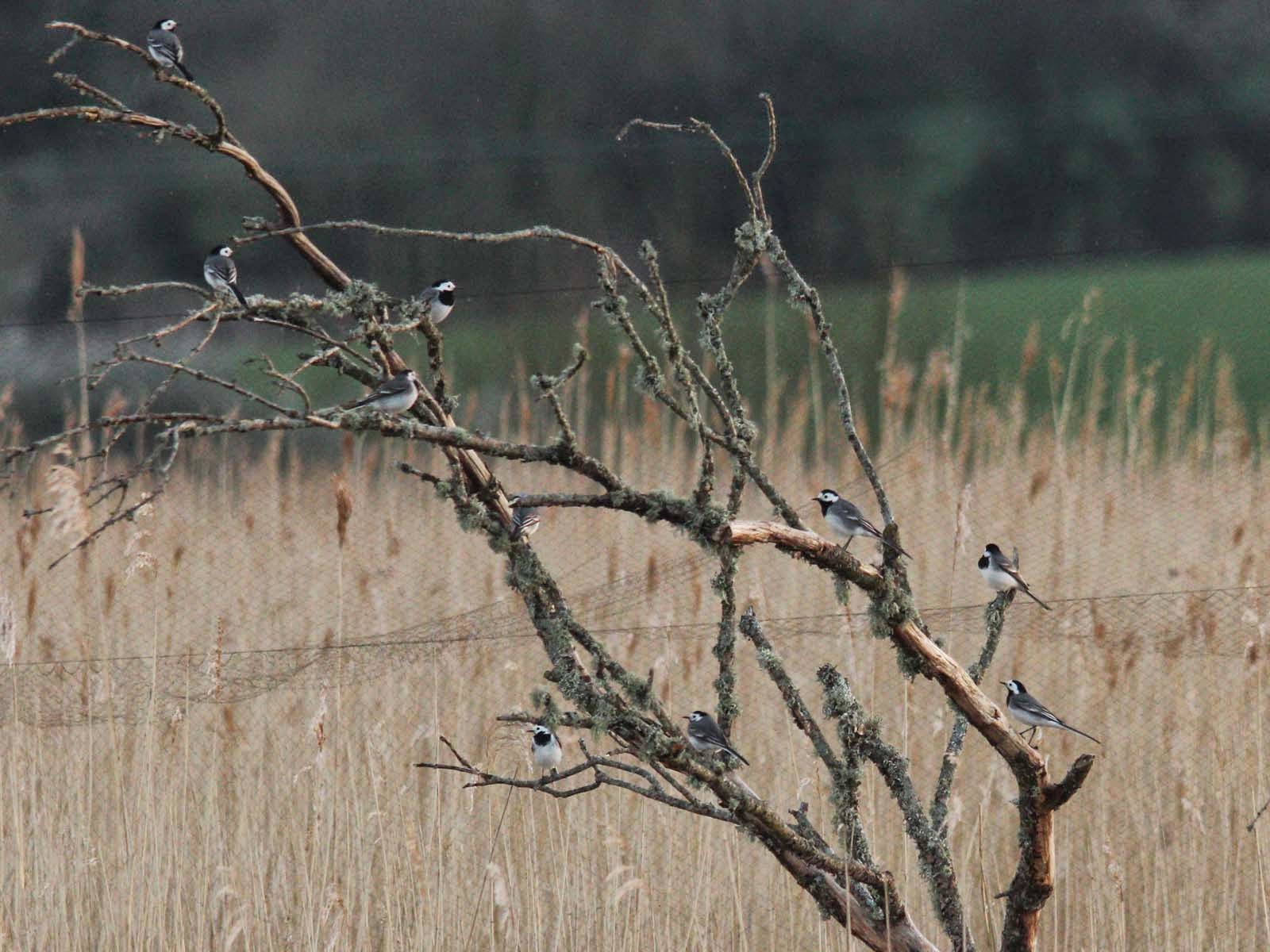 .....Off to Long Point Bird Obs. later tonight with Mick Townsend from Stanford Ringing Group for the migration monitoring season. During our 6 week stay what goodies will arrive... 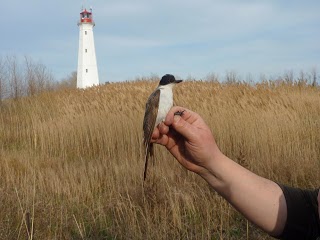 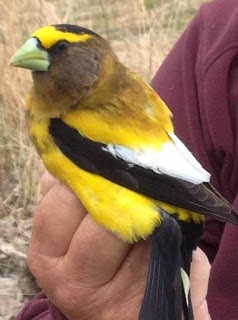 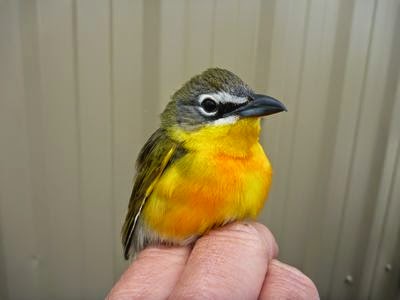 Yellow-breasted Chats are pouring through Mexico, a scare migrant this far north - usually later in the season. A strikingly marked overshoot to Long Point.
Yellow-throated Warbler and an almost annual for us here...and one was a lovely find for Wendy and I on our first banding visit to Costa Rica in 2012. 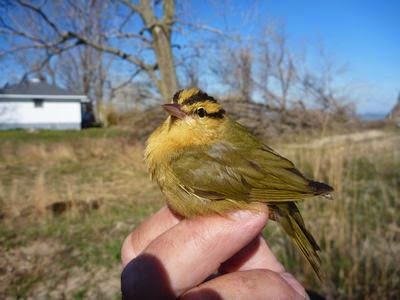 Brown and stripes.............!!
Almost feeling like the Teifi Marshes and home ! Probably as beautiful as an Aquatic, and probably as rare at Long Point. This a Worm-eating Warbler, and fantastic to have caught these in Costa Rica too..

With two others of the group off to Crete this weekend the blog might not be updated as often as usual in the next 2 weeks but back to normal soon. Exciting weeks ahead with the start of CES again, return of our reed bed regulars, Wagtail roosts and hopefully some more Wheatears at Mwnt.

Posted by Richard Dobbins at 07:10 No comments:

We started Wednesday with an early morning session at Mwnt with our spring traps.
Before we had finished setting up our 2 shelf net in the valley, the first Northern Wheatears were already in the traps. 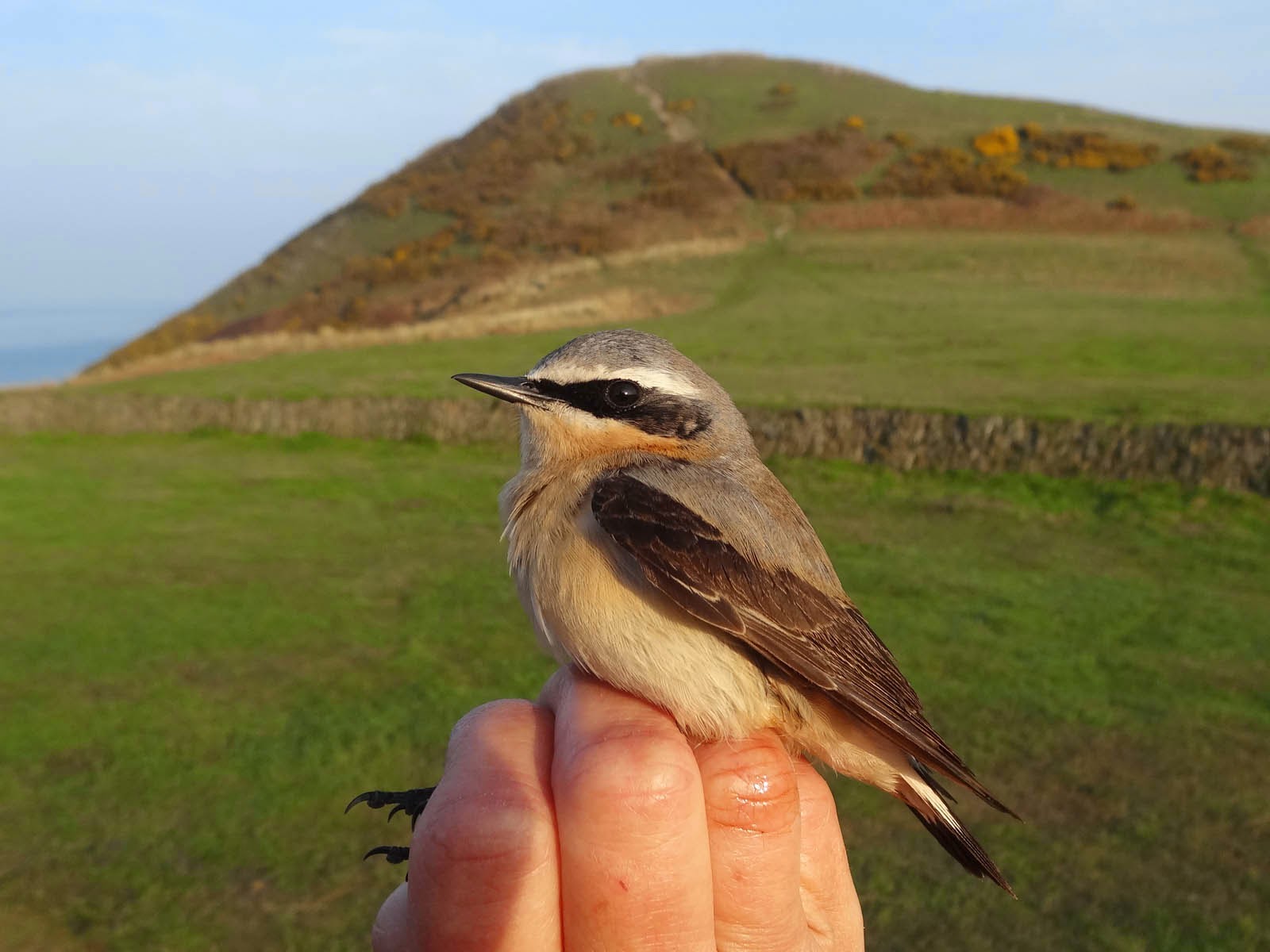 Four Wheatears were caught including a nice big, bright Greenland Wheatear with a 107mm wing.
The real surprise of this morning's migrant fall were 6 Willow Warblers and 2 Chiffchaffs in a 2 shelf net together. Nice to hear the first Grasshopper Warbler of the spring reeling. 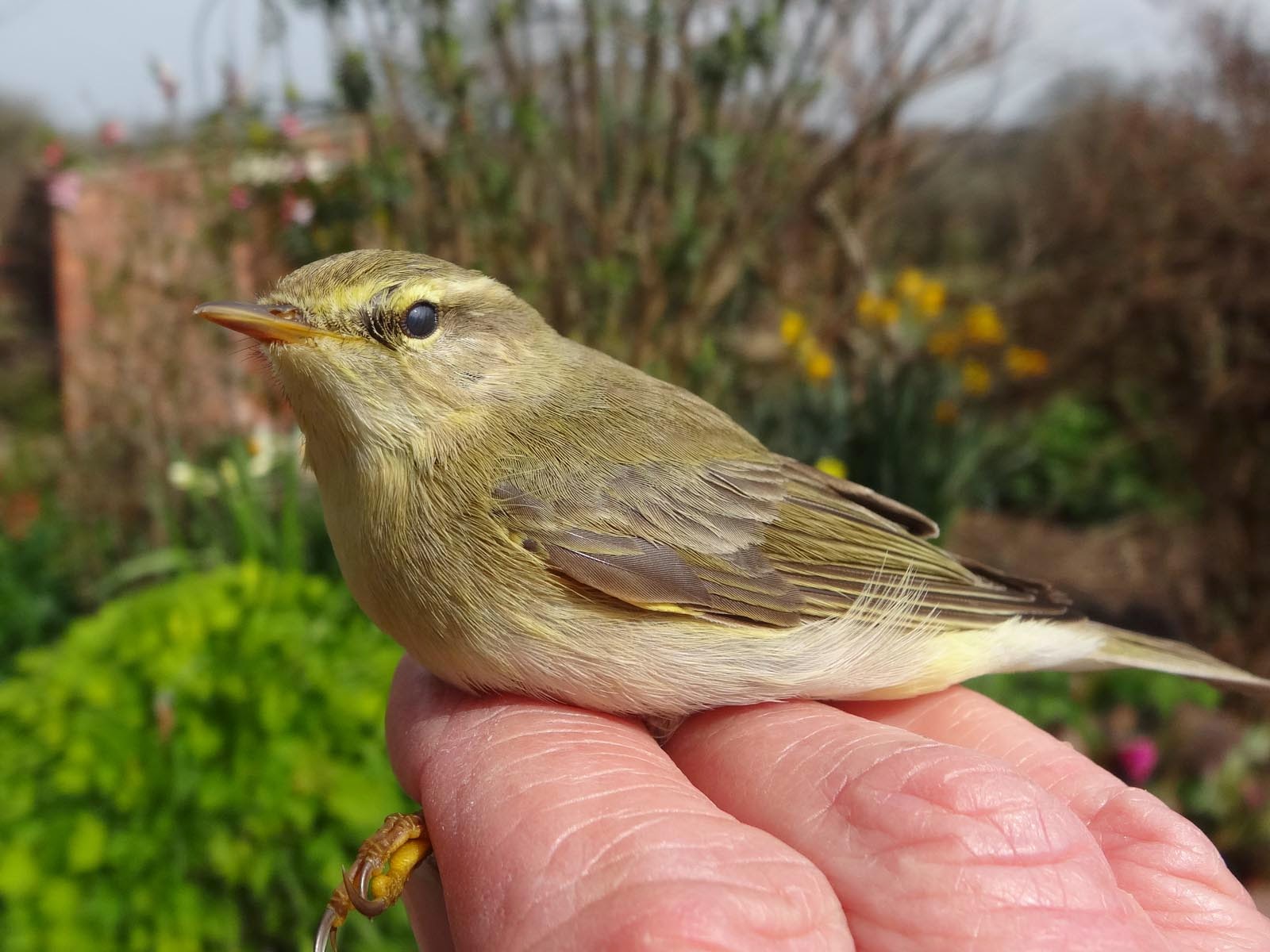 Continuing with the Willow Warbler theme, the bird in the photo was caught during some afternoon garden ringing. The first Willow Warbler ever ringed in the garden.
We finished the day with a couple of nets at our Mallard site on the Teifi Marsh. The surprise of the evening wasn't a bird in a net but a Tufted Duck on Mallard pond! 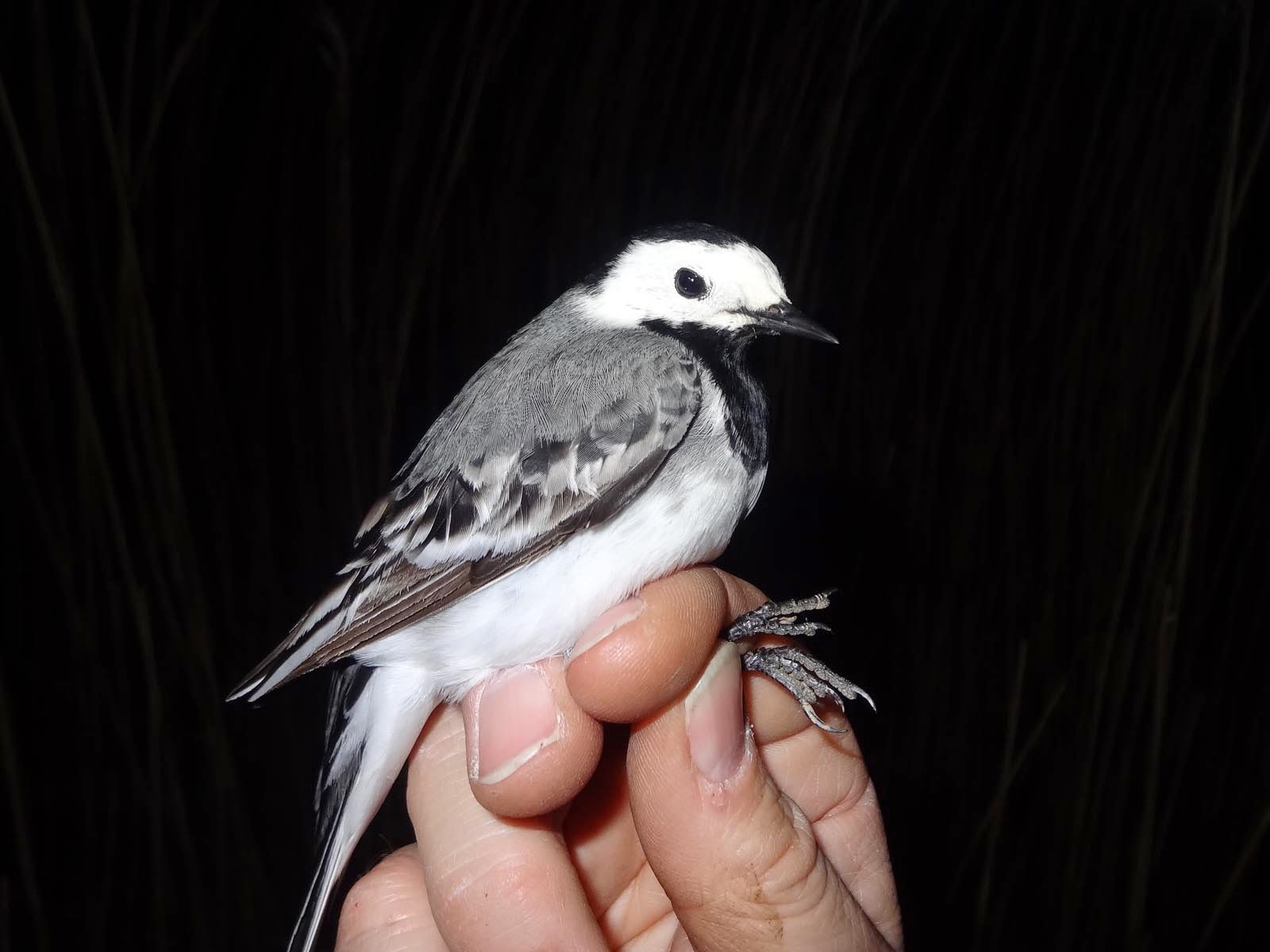 White Wagtails are on the move in small numbers. 2 caught this evening with 4 Pied Wagtails, 2 new Reed Buntings for our RAS project and always nice to retrap a Cetti's Warbler.

Today was the first visit to our Mwnt migration monitoring site by Ryan, one of our trainees. A chance for him to use spring traps and our mobile 2 shelf nets. 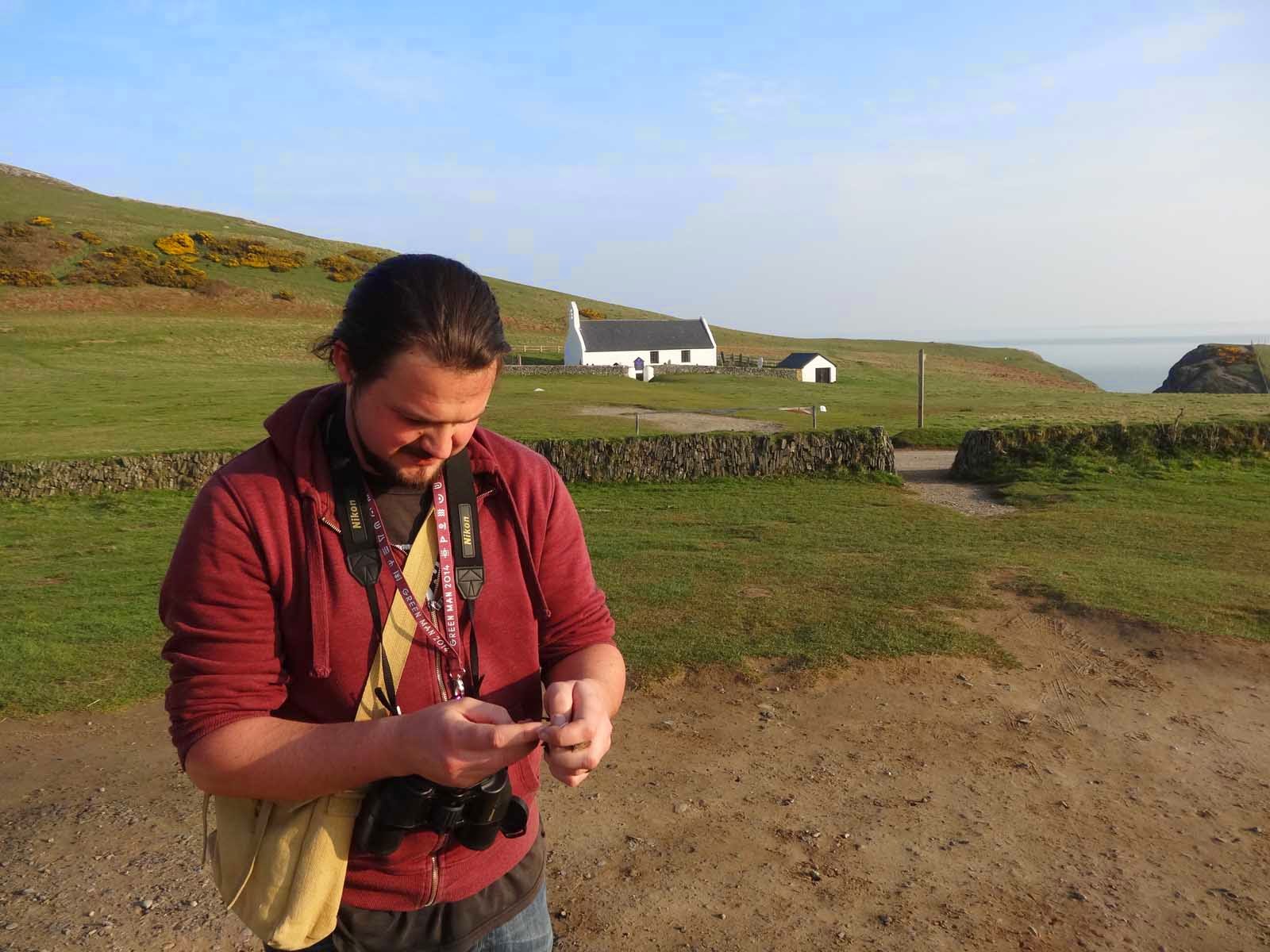 We will see what Mwnt delivers in the morning.

(Text by Wendy and title by Richard!!)


Posted by Richard Dobbins at 22:38 No comments:

Spring variety adds to the evening.... 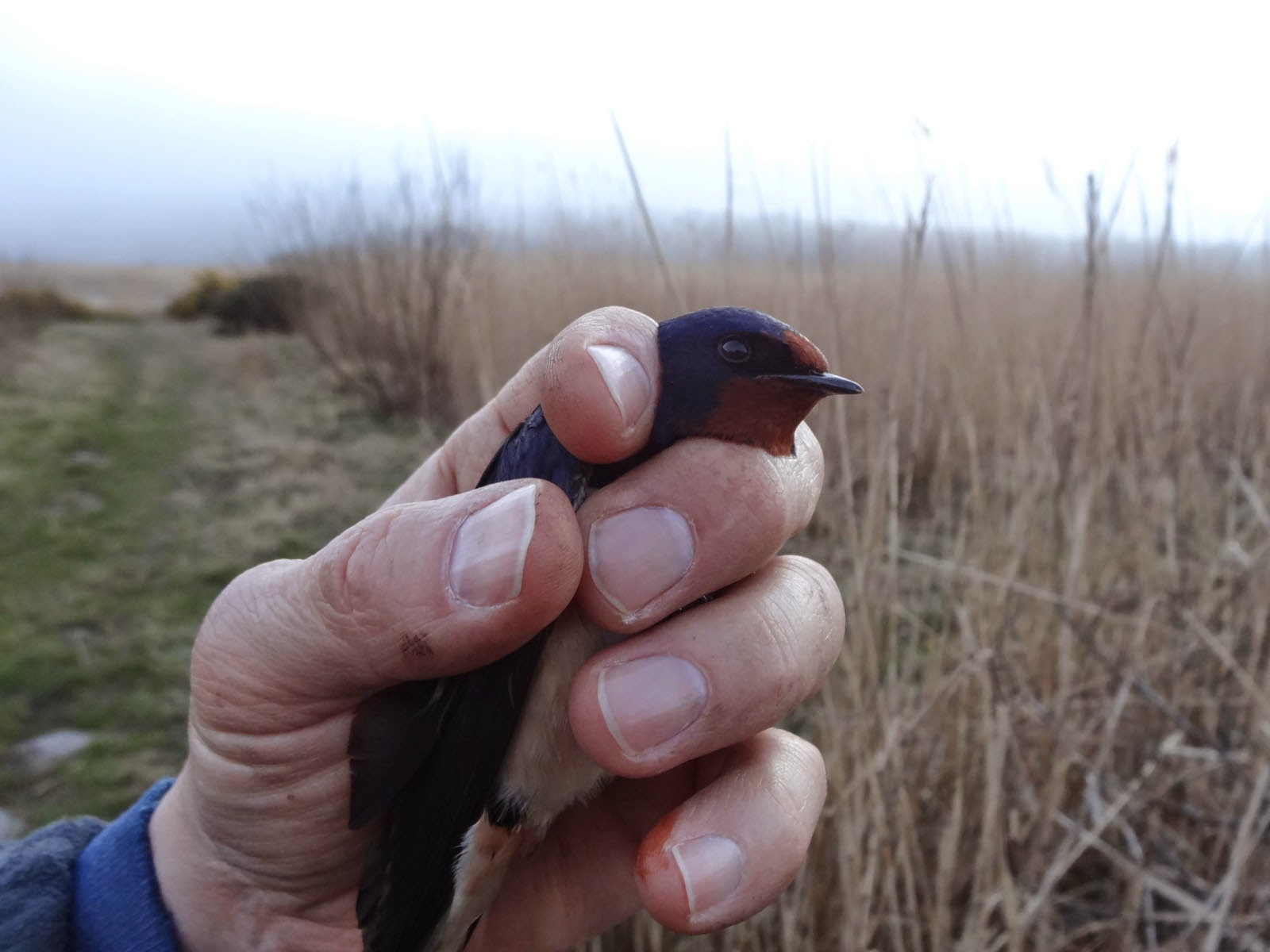 Hirundines have arrived and our first evening session with a 60 foot net and a couple of two shelf nets at Mallard pond did not disappoint! This adult male Swallow was the first of the Spring to be ringed during a misty evening. Closely followed by our first Sand Martin of 2015.

Cetti's Warbler and Reed Bunting..
added a local flavour to the nets. A new Cetti's is always a bonus as most of the local population are ringed, and a new male Reed Bunting helps our RAS (Retrapping adults for survival) project nicely too.

Pied and White Wagtails...
Very few White Wagtails have been seen so far, so lovely to start "our wagtail Spring" with one of each this evening..There is something special about our passage White Wagtails - a recovery from Iceland fuels this research...

On Sunday, a training session focusing on net erection, also produced four new Chiffchaff, and plenty of retraps to add to the mix.

Posted by Richard Dobbins at 07:18 No comments: