Goldfinch D678880 was ringed in Boncath during part of a study into local Siskins. This study will hopefully develop in to a RAS. The Goldfinch was ringed on 8th April 2014 and found sick on the 13th April 2015 at Ports, Indre-et-Loire, France, 370 days later and a movement of 669km. 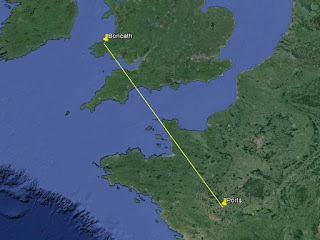 Though we have caught Goldfinches with large biometrics, suggesting a more continental origin, D687880 with a wing of 79mm and weight of 16.1g indicates a more local origin.

We carried out CES 3 yesterday, with good numbers compared to previous years CES 3.
Highlights included a Lesser Whitethroat with a brood patch, always a good record for this fairly recent colonist to West Wales, and  a breeding female Willow Warbler, first ringed in 2011 and caught in every breeding season since. Amongst the 42 new, and 34 retraps - two Whitethroats, a Garden Warbler, the first moulting adult Great and Blue Tits and 12 juvenile Robins.
Also five returning Reed Warblers, including one from 2010. 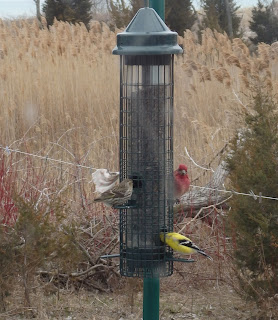 Above a photo of a feeder outside the Tip cabin- our Long Point Bird Obs. accommodation complete with Pine Siskin, Purple Finch and American Goldfinch. The Pine Siskins are much less colourful than ours, larger, with little difference between the sexes. 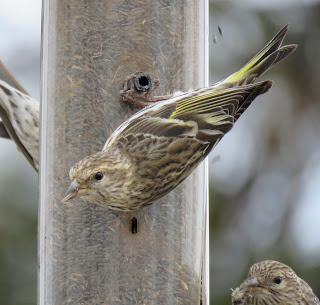 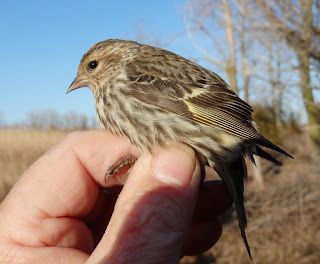 Now back from Long Point Bird Obs. in Canada time to catch the local Siskins, hopefully producing a RAS project. During 2014 from 30th May to mid July when they leave, 82 new and 36 retrap Siskins were caught in Boncath. Also a 3JJ Siskin moved from Llechryd to Boncath in 24 hours, a 5km movement. We are hoping that this year we can develop this into a RAS as suggested by the BTO.
(photos Mick Townsend)
Posted by Richard Dobbins at 22:12 No comments:

We return from the Tip ! Of Long Point Bird Obs. 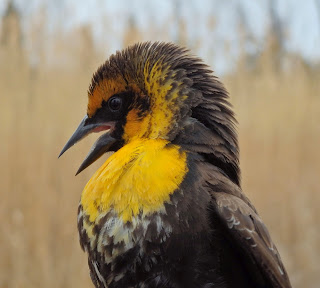 Mick and I are just back from 37 nights at the TIP banding station and another great Spring !
A few quick photos- species and data when home in Wales on Wednesday. This 2nd year male Yellow-headed Blackbird started the show- an adult male to follow ! 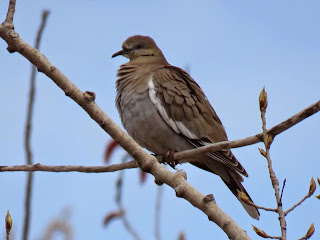 Perhaps the scarcest bird of the trip - this White-winged Dove, the 1st since 2012.

Not the rarest of birds- a spectacular bird in the hand ! 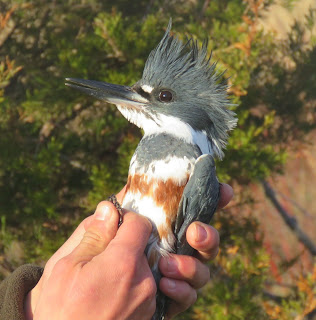 Another great flycatcher species for us too...this time a scarce but near annual Western Kingbird. 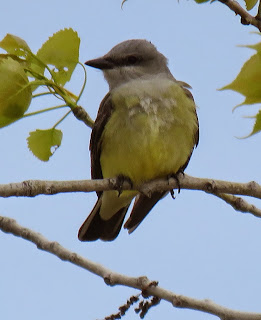 Our trip nearly over -

Much more to discuss, the following all banded. 31 species of warbler, 14 species of sparrow. Also six species of vireo banded in one morning. Twice we exceeded 55 different species banded in the session-
---so much to this banding station......
The Tip.....!! 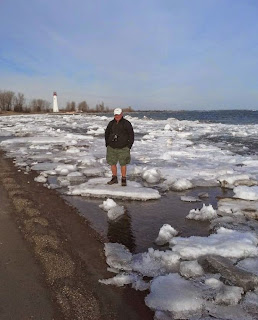 Mick Townsend from Stanford RG- where I started my ringing, joined with me as he has done for the last five years...(photos, a selection of Mick's and mine) 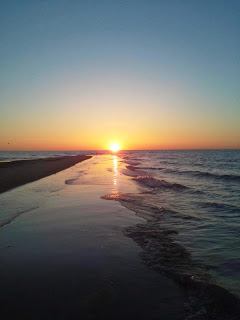 The final sunrise of our season at the Tip.

Posted by Richard Dobbins at 03:16 No comments:

Mid May on the Teifi Marsh is always a peak period for Sedge Warblers on migration so we try to concentrate our ringing efforts in the reed beds when weather allows.

At this time of year, the reeds seem to grow by the day so there is a lot of trimming to do to prepare and maintain our net rides for the season. With over 600 feet of net in the reed beds that is a lot of work! 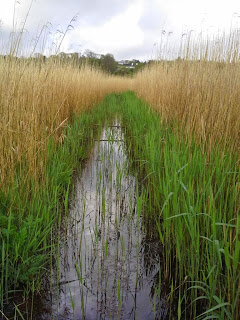 With a calm day forecast, at last we were able to open some nets this morning.
Today was typical for mid May with 70 Sedge Warblers caught before 9am.
One of the first birds had a Spanish ring engraved "Aranzadi San Sebastian". Never having seen one of these rings before, a quick bit of research found that Aranzadi is a ringing scheme funded by the Government of The Basque country.  After the crash of the ICONA-Madrid ringing scheme in 2012 the Aranzadi ringing scheme started to provide rings to other institutions that until then had been ringing with ICONA. We look forward to hearing when and where this bird was ringed as it migrated through Spain.
Of the 70 Sedge Warblers caught today, 63 were new birds, 7 retraps from previous years and the one control.
No May has surpassed 2009 when we caught 266 Sedge Warblers, with a totally unexpected 145 on our first ever CES session on the reserve.  We will be trying though - rain tomorrow but Friday looks hopeful for a repeat of today.
All of this is adding to our long term data set of birds migrating through the Teifi Marsh. This enables us to provide important information to the Wildlife Trust of South and West Wales on the importance of the Teifi Marsh as a stopover for migrants.
Posted by Wendy James at 22:58 No comments: 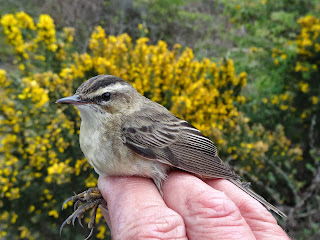 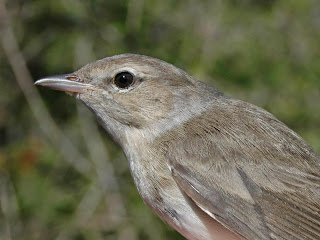 Four returning Willow Warblers were good especially one that was ringed in 2011 and caught each year since as a breeding female. 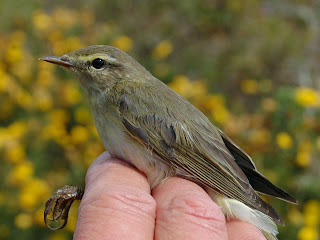 As we are doing a RAS on Reed Warblers, every adult that returns is providing good data. Oldest so far this year was one ringed in 2009 that has been caught each year since apart from last year.

With bad weather for a few days then two of us off to Skokholm island and Richard still in Canada, Teifi ringing will be on hold again for the next 10days. Richard tells us that migration through Long Point Bird Observatory has now picked up with a massive 532 birds of 39 species banded yesterday with Grasshopper Sparrow being his highlight.

White Wagtails slowing down but Reed Warblers are back..

In the last blog, two weeks ago, we were watching around 100 White Wagtails come in to roost every evening on the Teifi Marsh. A return visit to the marsh last night found, as we expected, the numbers to have reduced to just 13.
This is the view from Mallard hide watching them perch on the tree, the net and the net loops but only one in the net! The new green reed growth has shot up in two weeks. 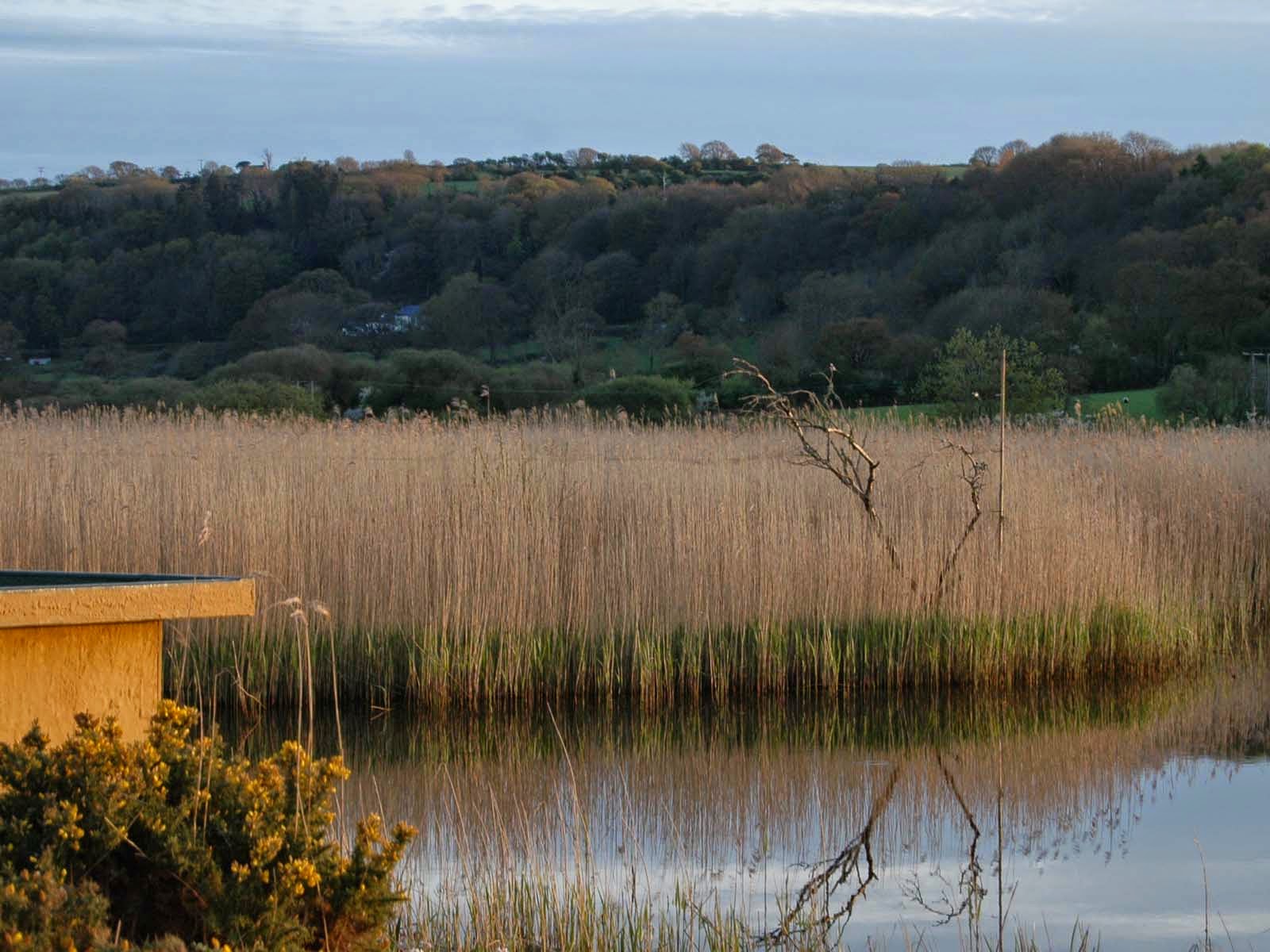 The structure to the left is the new Sand Martin bank - unused as yet.
Sedge Warblers were singing, so no surprise that we caught two new and one returning from last year. 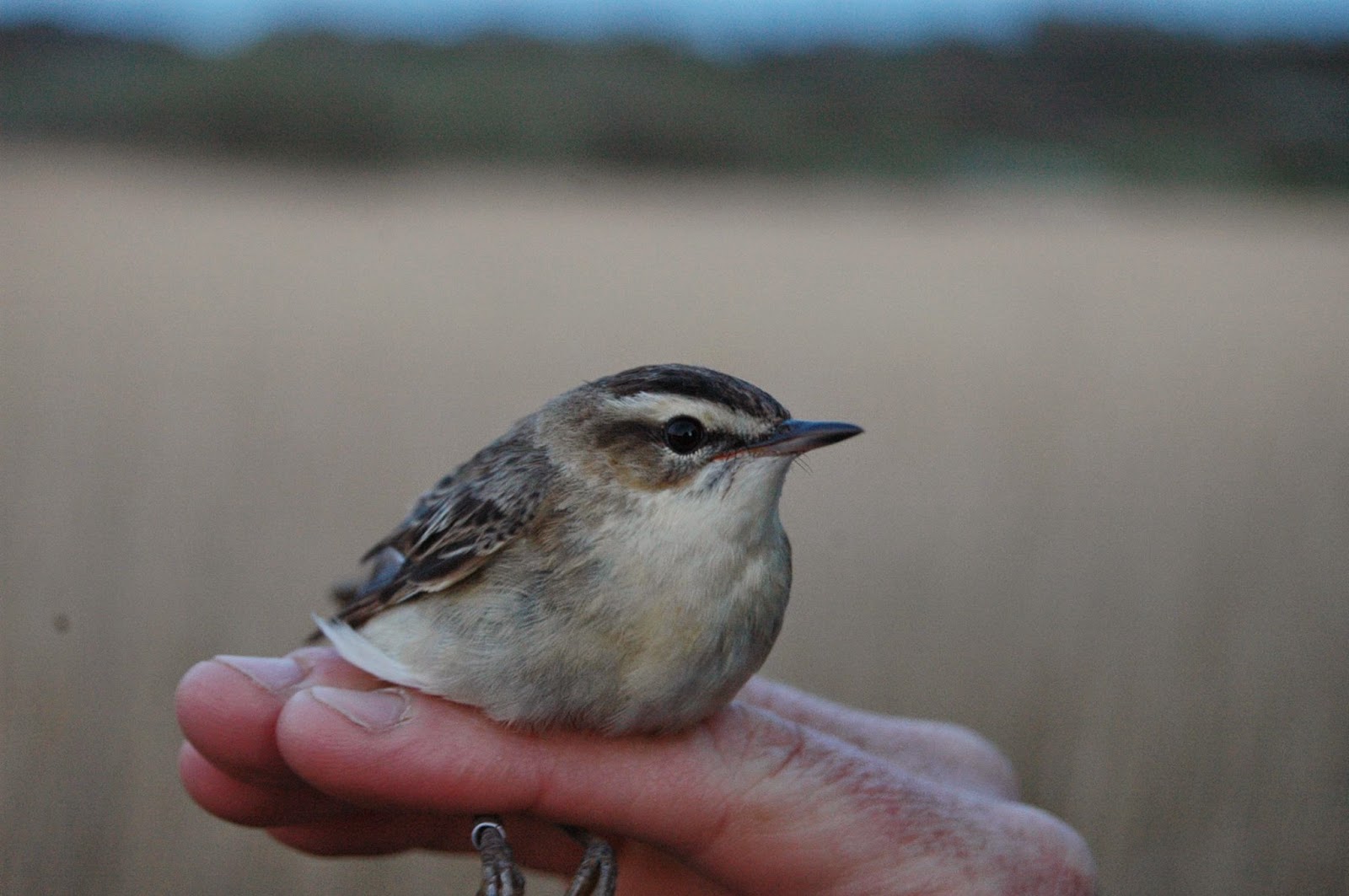 The first two returning Reed warblers from last year were a good start to our RAS project for the BTO and a Cetti's Warbler, ringed in 2012 and retrapped once in 2013 and 14.
Four new species for Sam, a trainee with Pembs RG but also ringing with us, on her first visit to our Mallard reed bed nets. Our other new group member, Sam's daughter, was very excited to experience the privileged close view of birds that ringers have and the chance to help release the birds after ringing. 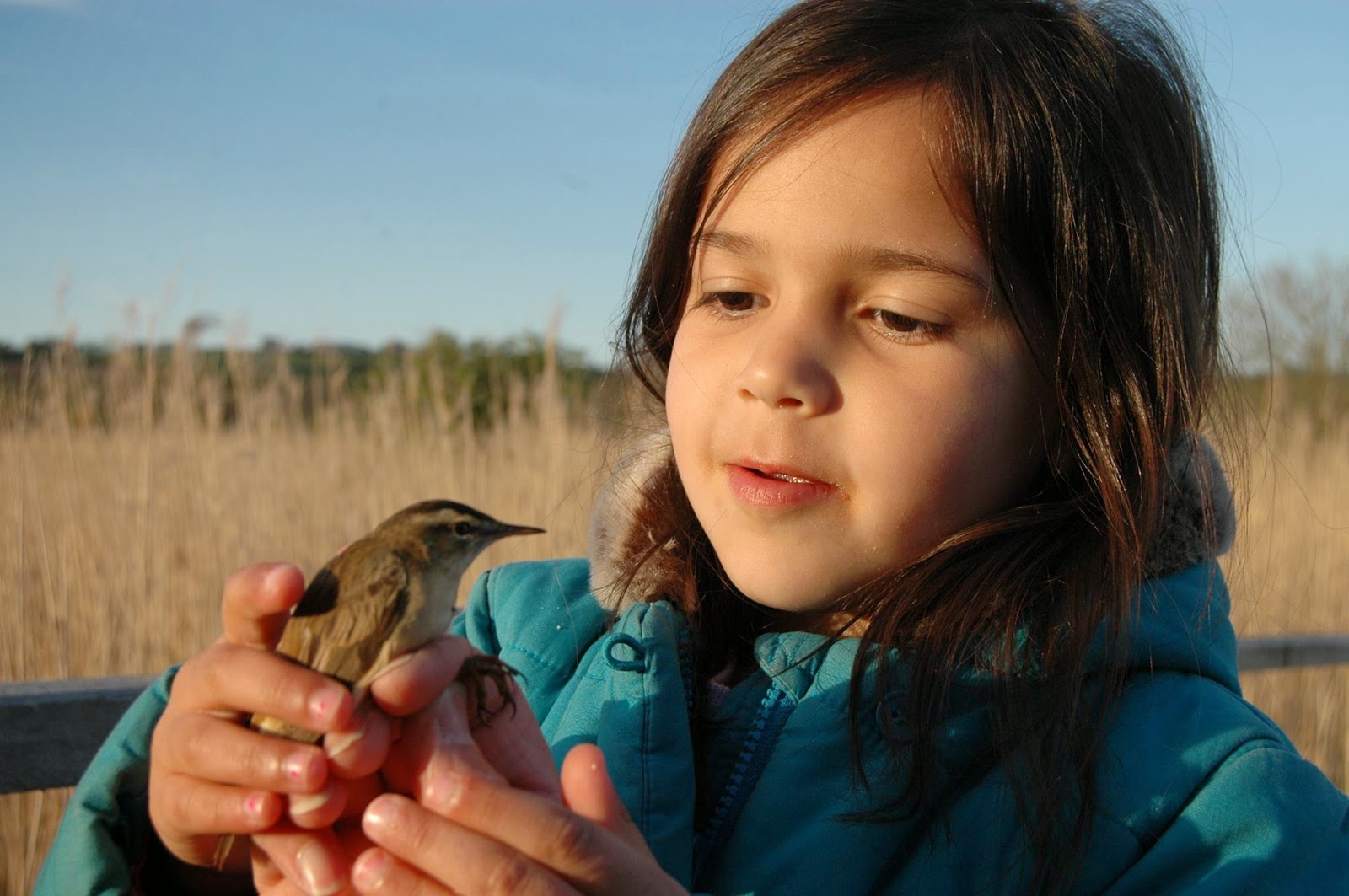 The group hope that their activities on the Teifi Marsh are helping to inspire future generations to watch, learn about and enjoy wildlife 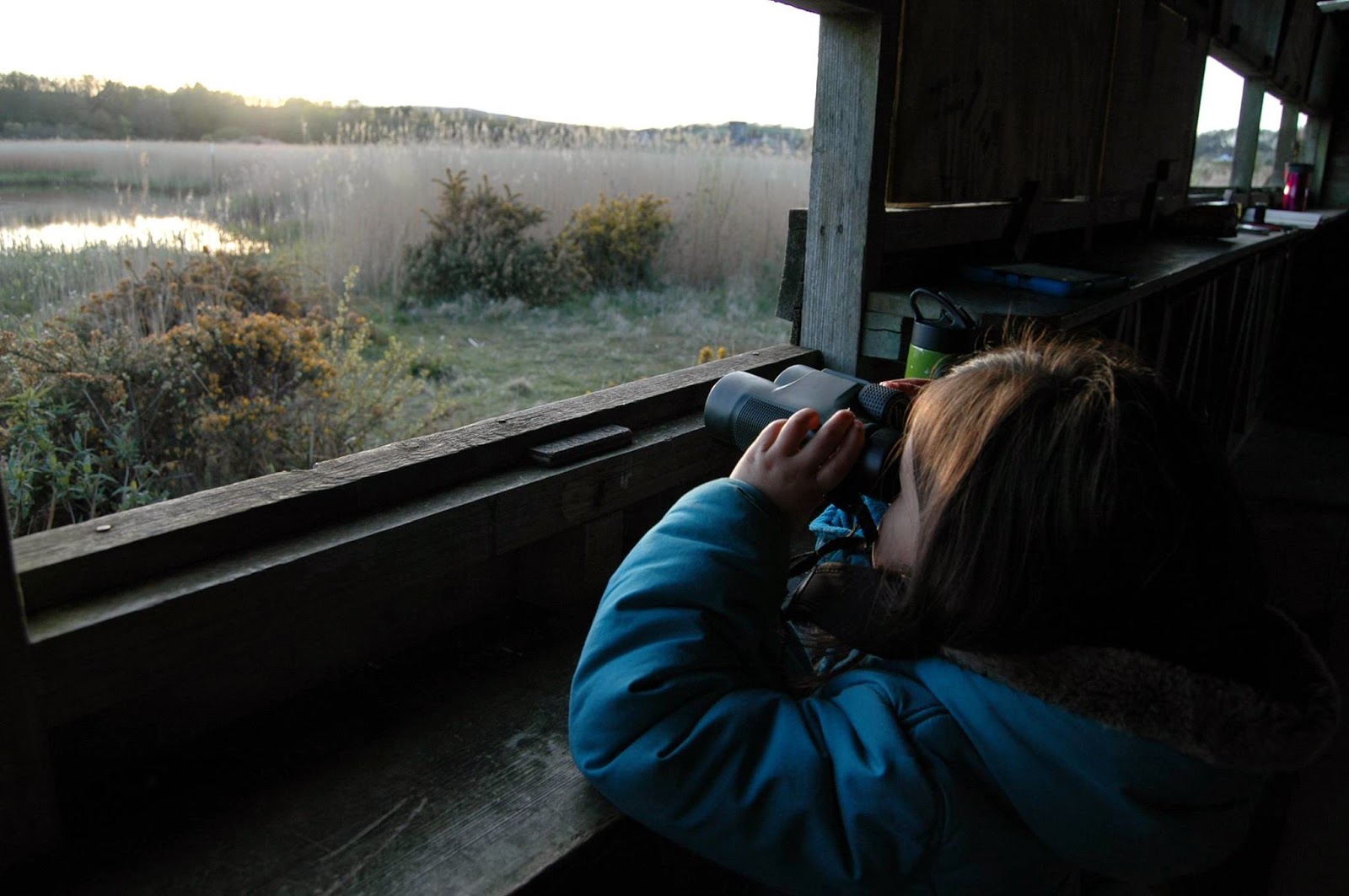 Thanks to Sam for the pictures.
During a short session this morning we ringed another 8 birds in the reed bed, 7 Sedge Warblers and a Reed Warbler.
Meanwhile at Long Point Bird Observatory in Canada, Richard has had a slow start with cold, windy weather, even some snow on one day. With no internet there we will look forward to pictures on his return. Big migration is forecast by Ebird after the weekend with warmer air from the south so he will be in for some busy days with Warblers flooding in.
Posted by Wendy James at 17:53 No comments: