A summary of what the group has been doing in the last 2 weeks.
The first 2 CES sessions were completed in good weather conditions, calm and cloudy.
CES 1 saw the first juvenile birds of 3 species - Long-tailed Tits, Blackbird and Dunnock
69 birds were caught (38 new)
The oldest retrap was a Reed Warbler ringed in 2013 and retrapped each year since.

The first juvenile Robins were ringed at CES 2 on the 17th May.

Nest boxes at Ffynone wood, Pengelli and various sites in the Towy Valley are being checked regularly. Also some open nests are being monitored.
Marsh Tits, Nuthatches, Dippers, Linnets and Grey Wagtail pulli have been ringed.

At Mwnt, our Linnet RAS project is going well with a satisfying number of last years birds retrapped this breeding season. A smart male Wheatear was a nice addition to the Linnets caught in a Whoosh net.


News of a few recoveries from the BTO...

This male swan, pictured here keeping a watchful as we ringed one of his cygnets in February, was ringed in 2006 as an adult at St Dogmaels. 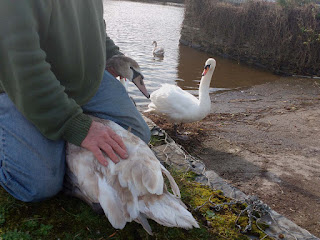 He is at least 11 years old and breeding again on Mallard pond on the Teifi Marsh but this year with only 1 cygnet.

A couple of Siskins ringed in our gardens late winter last year were in Scotland instead at the same time this year.
Siskin Z802913 ringed Boncath 28th March 2016 , controlled on 11th March 2017 in Shebster, Highland
Siskin Z802778 ringed Llechryd 8th April 2016, controlled in Killiegowan, Dumfries and Galloway on 4th April 2017

Another Siskin movement, S574004 was ringed in Llanfynydd on 20th March 2017 and 43 days later was 299km NNE in West Burton, North Yorkshire. Unfortunately this was reported dead after hitting a window.
Another bird found dead had been killed by a cat. Z511166 was ringed in Llechryd 0n 28th October 2015 and reported in Sucre-sur-Edre, Loire-Atlantique, France on 6th March 2017

While most of the regulars of the group were away we were very grateful that Alastair Wilson and Ros Green were able to continue our migration monitoring on the Teifi Marsh. Amongst the Sedge Warblers they caught on 4th May was a control, ringed last September on its first autumn migration at Hengistbury Head in Dorset.

The last recent recovery was Sedge Warbler S161774 ringed on the Teifi Marsh on 15th August 2016 and controlled In Jonkershove, West-Vlaanderen, Belgium 14 days later on the 29th August.

A busy week ahead with CES 3 to complete, nest boxes to check and pulli to ring, 2 of the group off to Skokholm Island ringing, Chough ringing on Ramsey and 2 of the group helping with the biannual count of seabirds on Cardigan Island.
Posted by Wendy James at 15:36 No comments:

News from the Teifi soon, but first a summary of a week spent ringing in Gibraltar by three of the group. Because of its location on a key migration route, the Rock of Gibraltar has long been a recording site for the migration of raptors, sea birds, passerines and near-passerines. Ringing has been an increasing part of that recording effort since 1991.


Ringing is done at the Jews Gate Bird Observatory on the Upper Rock Nature reserve. Visiting ringers are made very welcome by the Gibraltar Ornithological and Natural History Society. 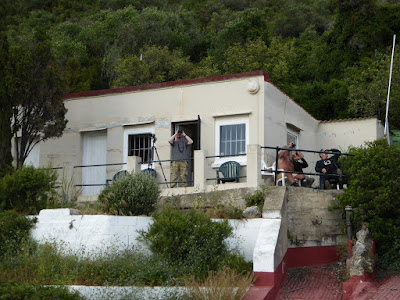 As well as being the ringing base, Jews Gate is also the location for raptor migration counting. We learned a lot from the raptor-counters about identifying fly-over raptors. On one day, for example, the counts were Honey Buzzard 69, Black Kite 1572, Griffon Vultures 19, Egyptian Vulture 2, Short-toed Eagle 10, Marsh Harrier 6, Booted Eagle 21, Sparrowhawk 46, Kestrel 2, and Hobby 5.

Most days we were opening 16 nets in Mediterranean matorral (scrub) of mostly Olive and Lentisc.
Rather nice views from the nets... 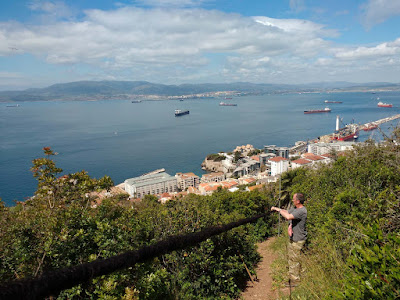 ...some of which are quite steep: 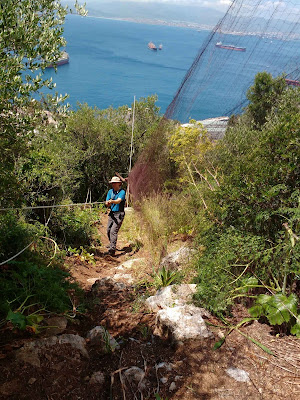 In 8 days we processed 382 birds of 38 species. The most frequently caught birds were Willow Warbler (100), Garden Warbler (44), Pied Flycatcher (28) and Melodious Warbler (19). We had a fall of birds on the day following a day of exceptional rain (146mm), during which we caught 180 birds.

The most unexpected species was Icterine Warbler.  We caught two - the first ringed on Gibraltar  since one day in 2006 when four were ringed. 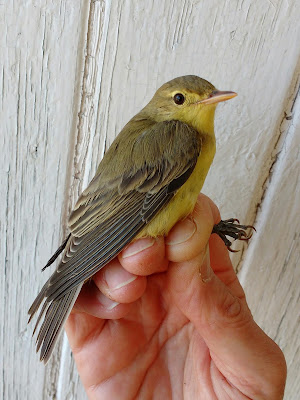 The overall size and the long wing of this species were immediately noticeable in the hand when compared with the smaller but otherwise similar Melodious Warbler. 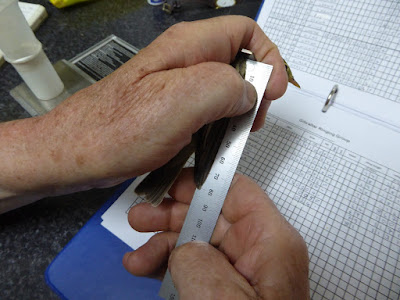 The Scops Owl is a species caught in good numbers during Autumn migration, just one for us while catching Nightjars 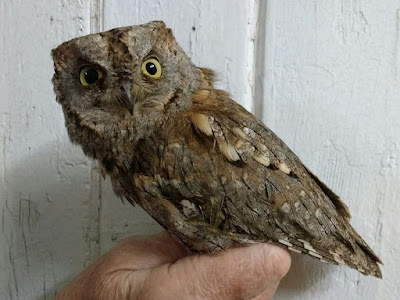 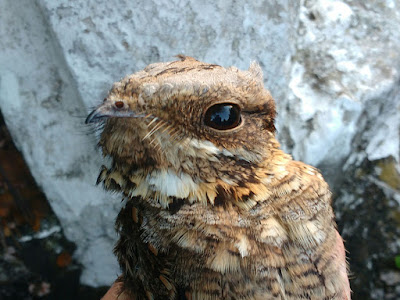 ... as well as four European Nightjar. Other species included:


We learned a lot during a very enjoyable week. Many thanks to Steve Norman (resident ringer), Charles Perez (GOHNS) and to Jill Yeoman for the welcome and importantly in a land of very steep hills, the lift to Morrisons.

Strait of Gibraltar Bird Observatory
Recent records from GOHNS
Posted by Wendy James at 19:57 No comments: