BTO Birdtrack helps us to target our ringing..

The passage of Wheatear started at Mwnt, a headland on the coast of south Ceredigion, a couple of weeks ago. Then migration seemed to grind to a halt but suddenly picked up again in the last few days. Our observations completely fit in with that on BTO Birdtrack where volunteers' counts add up to build a complete picture of migration, movements and distribution of birds. 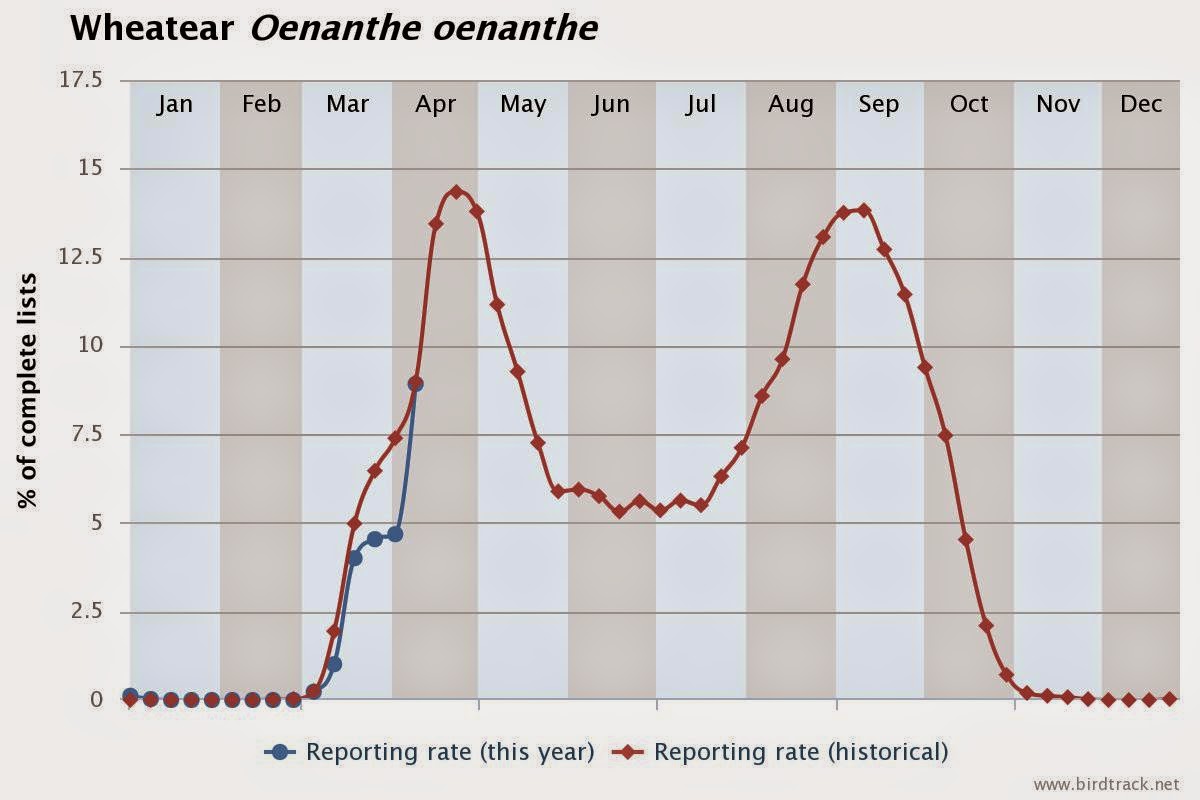 With anticipation we headed for Mwnt today. There only four birds around the headland but we managed to catch and ring three of these handsome birds before they continue on their migration north. 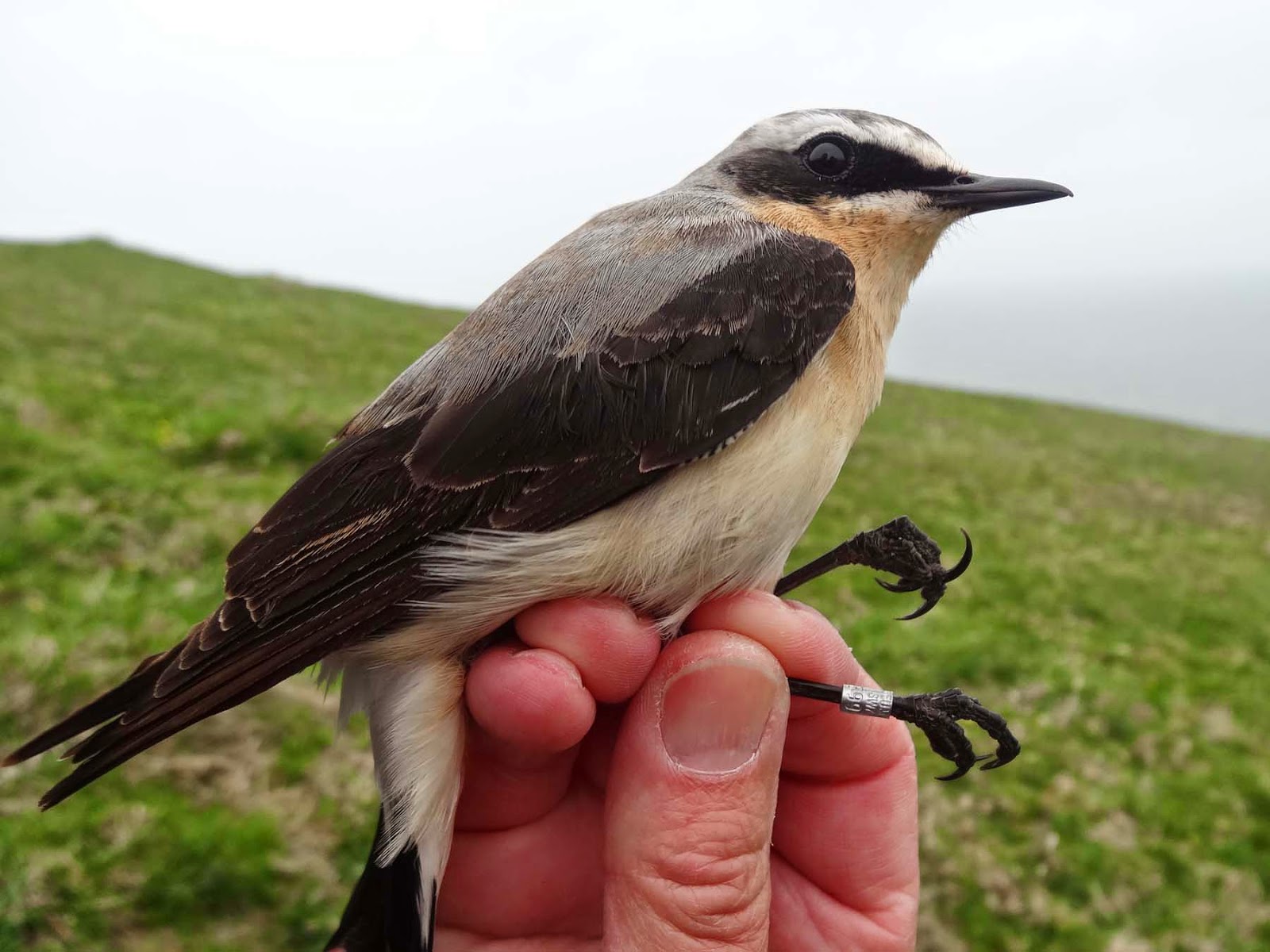 With thanks to the National Trust for giving us permission to ring and record birds at this beautiful location. 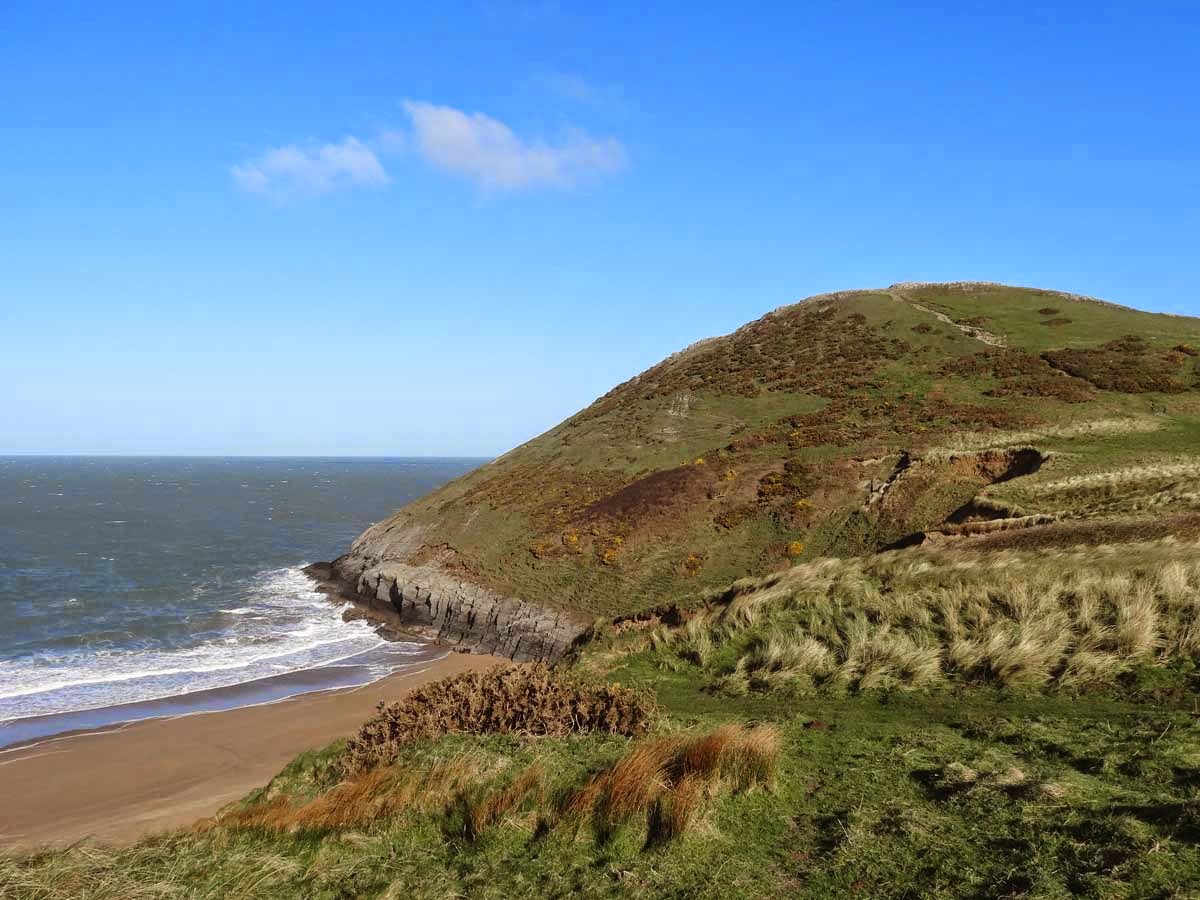 White Wagtails on the marsh

Wagtails poured on to the commercial reed - cut this evening. Over 100 arrived and a sample caught showed 25 / 26 to be White Wagtails. Out of 82 birds caught since 10th April - 79 White and only 3 Pied Wagtails. Early in the month, when the roosts were smaller, only 8 / 23 were White Wagtails.
Posted by Richard Dobbins at 22:49 No comments:

A Cetti's control and the first Sedge Warblers

Walking along the track to our ringing site on the Teifi marsh was a pleasure on Friday morning at dawn as at least 3 Grasshopper Warblers were reeling from the reed bed. Soon they were joined by Sedge Warblers singing.
Although not a busy ringing session there was quality. A control Cetti's Warbler was excellent. 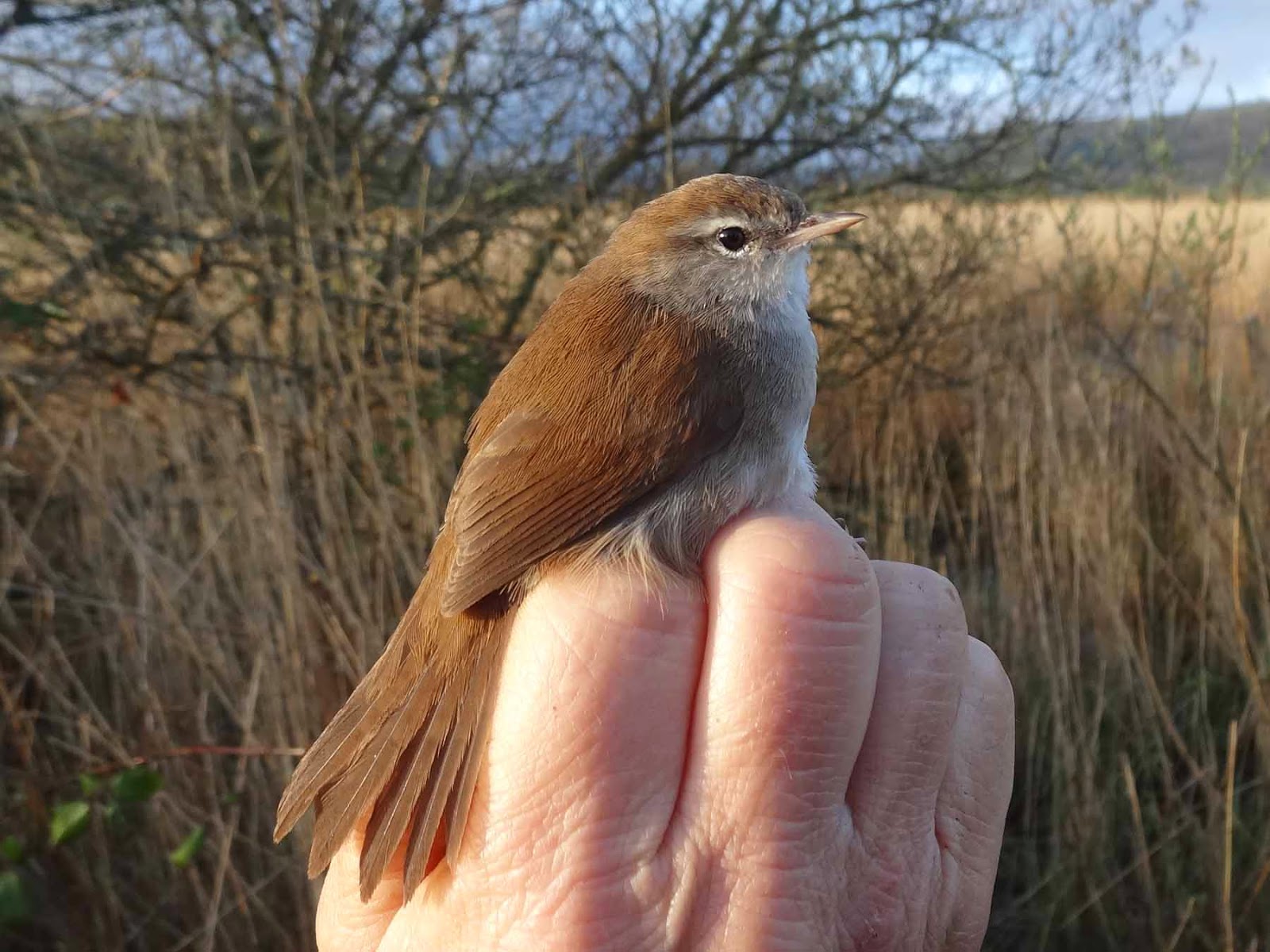 We have only had one Cetti's before that has been ringed elsewhere. That bird was from Farlington Marsh in Portsmouth. We wait with interest to hear where this one has travelled from.
The first Sedge Warblers of the year were  ringed. We ringed 509 of these last year so plenty more to come. 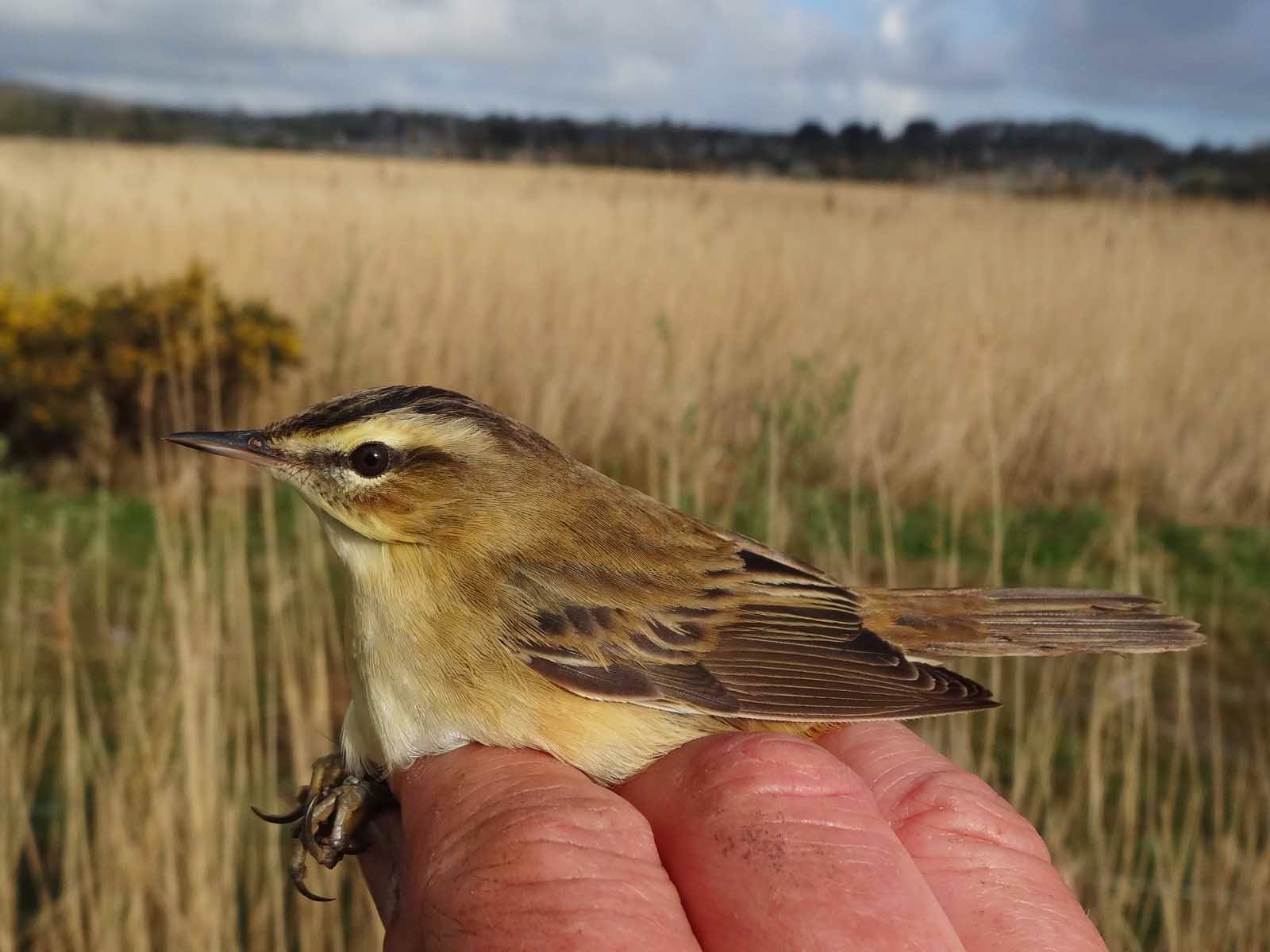 Our evenings have been busy on the marsh too with Wagtail roosts. Over 50 have been ringed in the last week - mostly White Wagtails with just a few Pied.
An interesting 4 year old Blackcap was caught on the reserve early evening today - ringed there on the 1st May 2011 as a 2nd calender year bird and not seen since. Unless we catch him again during the summer we won't know if he is a site faithful breeder or just using the reserve as a same migration stopover site again.

Amid all the Goldfinch Passage Action...

... one of the local girls is getting on with business outside my kitchen window. The nest is tucked into that dark gap in the foliage where she's looking. 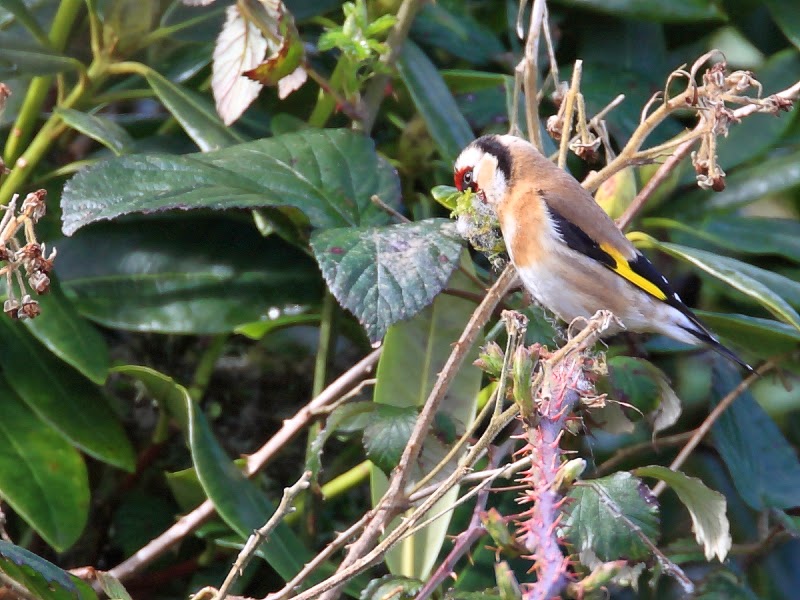 Firstly from Chris,
Between 4 and 7 yesterday afternoon I trapped 34 Goldfinches, 32 of them new.

More remarkably, on entering them into IPMR that evening, I found that  7 of them, all males, exceeded the maximum weight expected by IPMR (19.6 gm).  The heaviest I had was 20.9 gm, this bird having a wing length of 83mm, which equals the maximum wing length expected by IPMR.
(It was also bigger and heavier than the female Chaffinch that I had processed a little while before it (80mm and 19.8gm)). 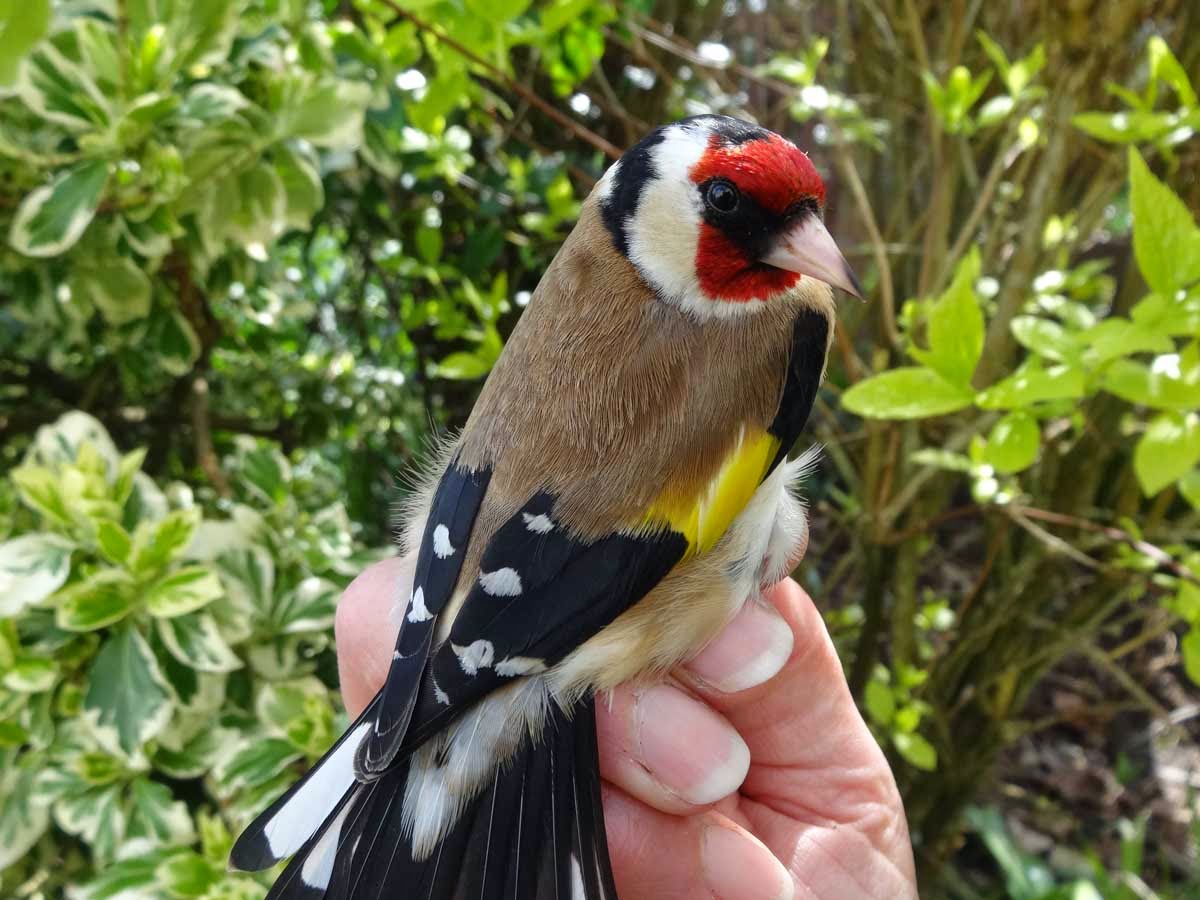 A similar pattern from Wendy -
Several Goldfinches ringed this week that have been heavier than the maximum weight expected - the heaviest weighing in at 21.3g but wing length only 77mm and none with wings longer than 83mm.
There has been a noticeable increase in Goldfinches in the garden and also along the coast when out for a walk today. This fits with the same observations last year although a bit earlier as my garden peak was around the 16th April.

From the finch passage heartland of upland Boncath a similar story of very large Goldfinches passing through. Goldfinches ringed yesterday included - 6 birds over 20g - max 21.7g, though no bird today weighed over 20g. Yesterday 11 birds had  fat scores 3 or above - the max  fat score being a 6 (a 2nd year male with wing 79 and weight 20.7g) Yesterday, 7 birds with wing lengths of 80 or above - max 82. The longest wing measured today was an adult male with a wing length of 84mm.

These are interesting observations of passage birds clearly feeding well. Weight will increase during the day, but they do seem to be well above "average" size and weight birds, with some carrying considerable fat - indicative of a fair distance still to travel.

Siskin migration seems to have slowed or stopped, with all eight of my Siskins caught in the last two days showing signs of breeding.
Posted by Richard Dobbins at 23:09 No comments:

We had a short ringing session on our CES site on the Teifi Marsh today to check guys and poles ready for the coming season. We were rewarded with a catch of 27 new birds and 12 retraps.
The highlights were 9 Blackcaps, 7 Willow Warblers and 4 Chiffchaffs. Some good retraps - a Cetti's Warbler ringed as a juv in 2012 that we didn't see last year and a Goldcrest ringed as a juv in August now with a brood patch breeding on the reserve.
Two of the Willow Warblers had us scratching our heads and reaching for Svensson as they looked like Chiffs with dark legs yet were not emarginated on the 6th Primary (apologies to non-ringers for the technical bit here!). On the Skomer blog on the 30th March they had posted a picture of a similar looking bird labelled as the subspecies "Northern" Willow Warbler P.t. acredula which breeds  in northern Scandinavia east to western Siberia and winters in central Africa. Our usual Willow Warblers P.t. trochilus breed in Europe (from the Pyrenees and Alps northward) except northern Scandinavia and winters in west Africa. Hopefully we will catch some more of these interesting Willow Warblers and take some pictures.
This evening we were back on the marsh enjoying the spectacle of a couple of hundred Hirundines over Mallard pond and at least 30 Wagtails coming into roost. Cetti's Warblers were still singing from 4 territories after dusk. We ringed 8 White Wagtails and 1 Pied Wagtail.
The next blog will be about the current Goldfinch passage through our gardens. 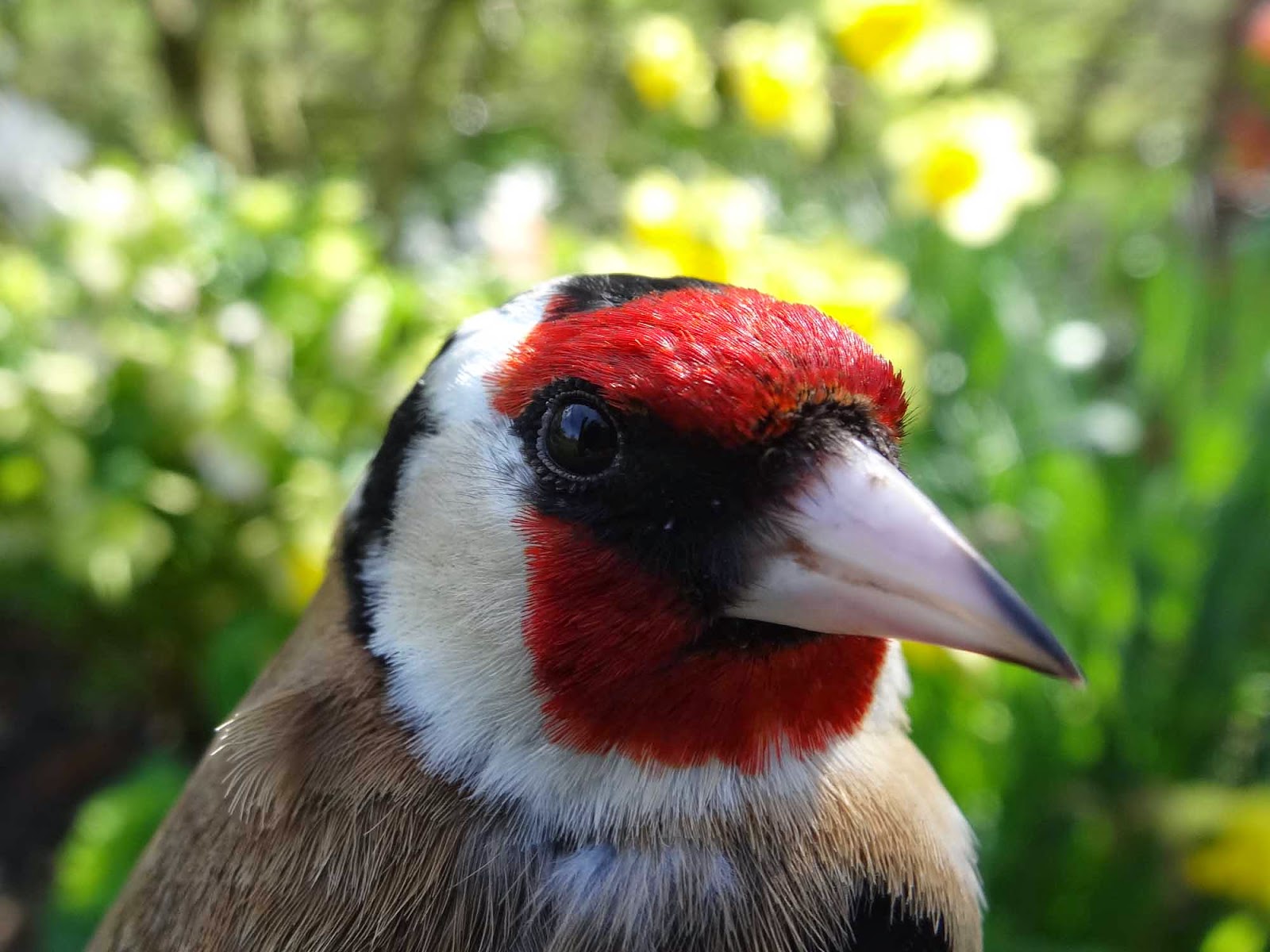 Back to the marsh and a surprise from Germany!

With migration getting going it was time to open some nets on the Teifi Marsh for the first time since Autumn. At 6am it was dark and quiet apart from about 100 Sand Martins coming out of roost. With just a retrap Wren from last year by 7am it wasn't looking too hopeful. Then the next bird in the net was this Chiffchaff pictured below with a Helgoland ring ! This is the first bird ringed in Germany that the group have caught. 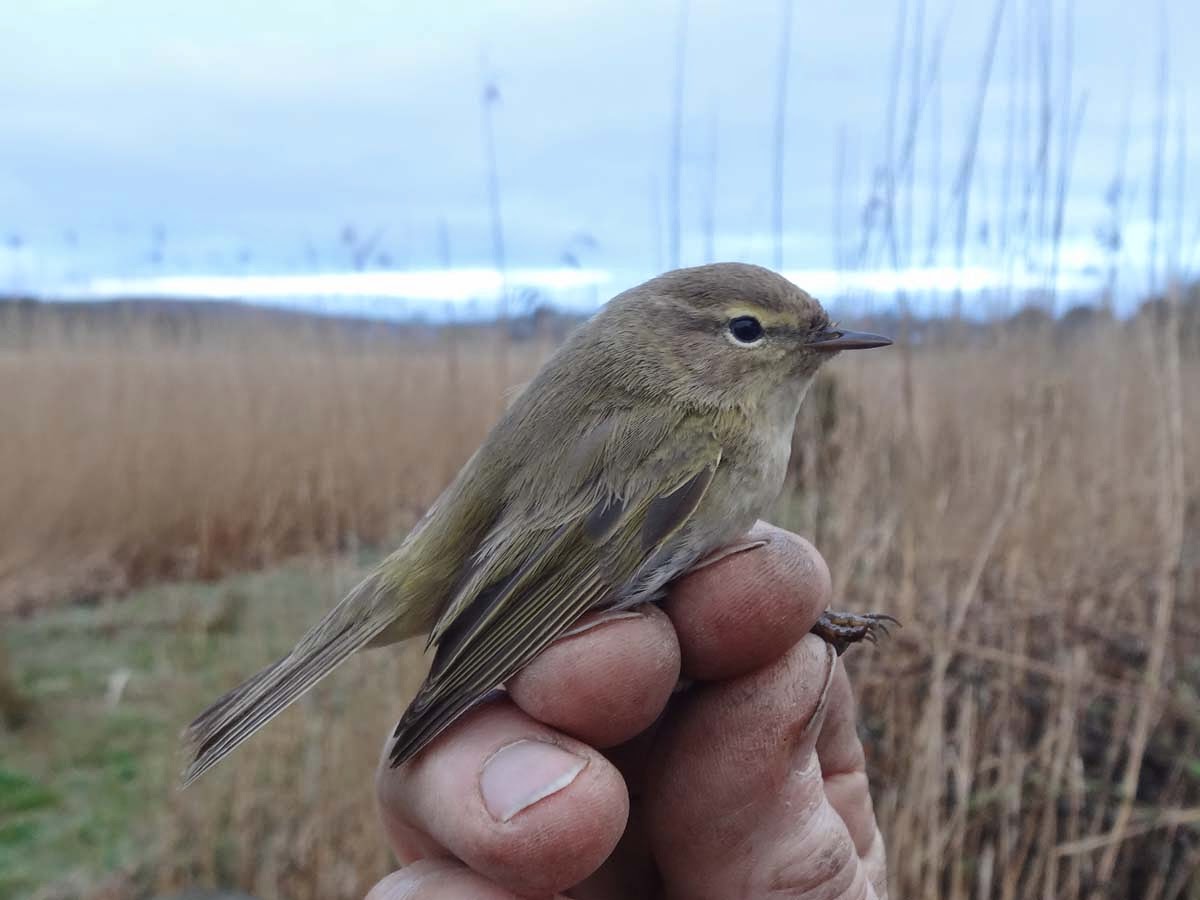 By 8am there were Willow Warblers singing of which we ringed 7 in the next hour. 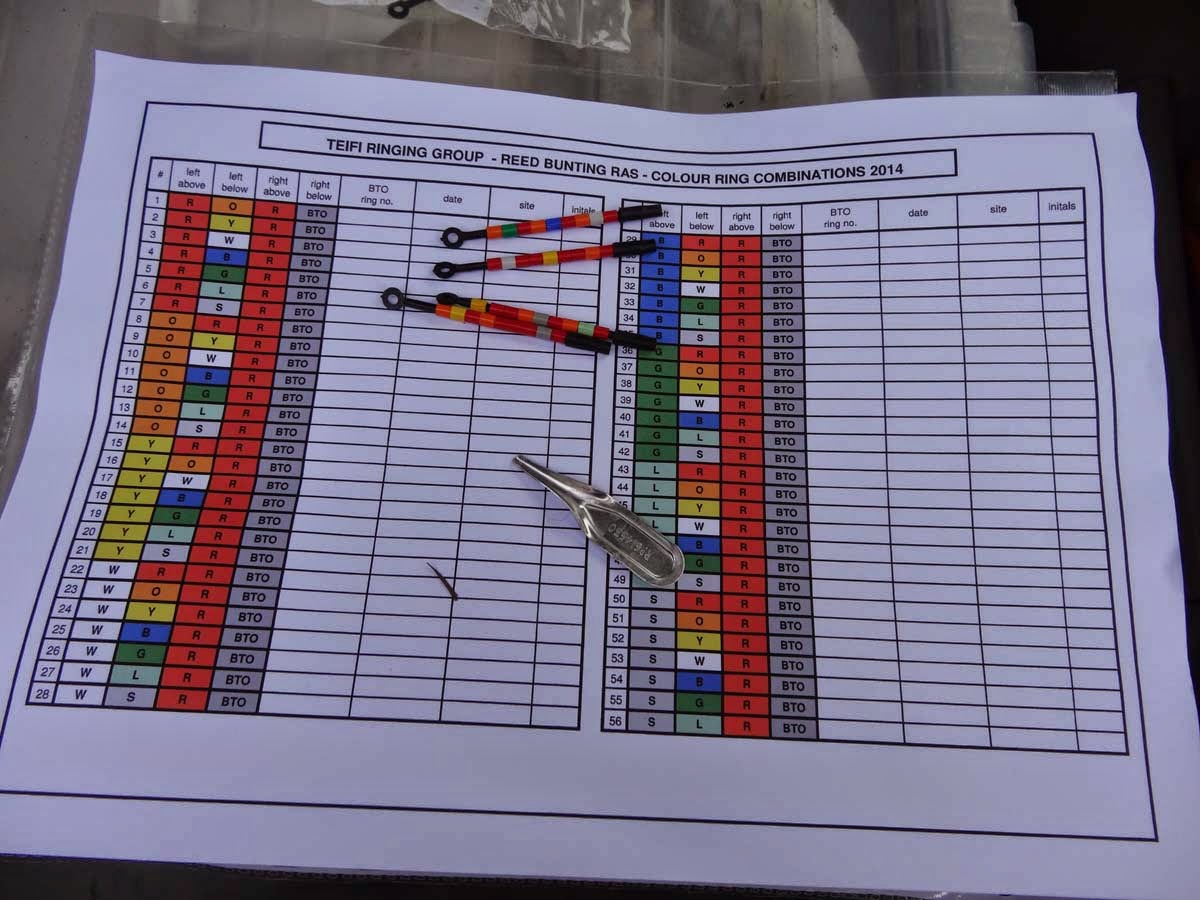 These are two of the 3 Reed Buntings caught today 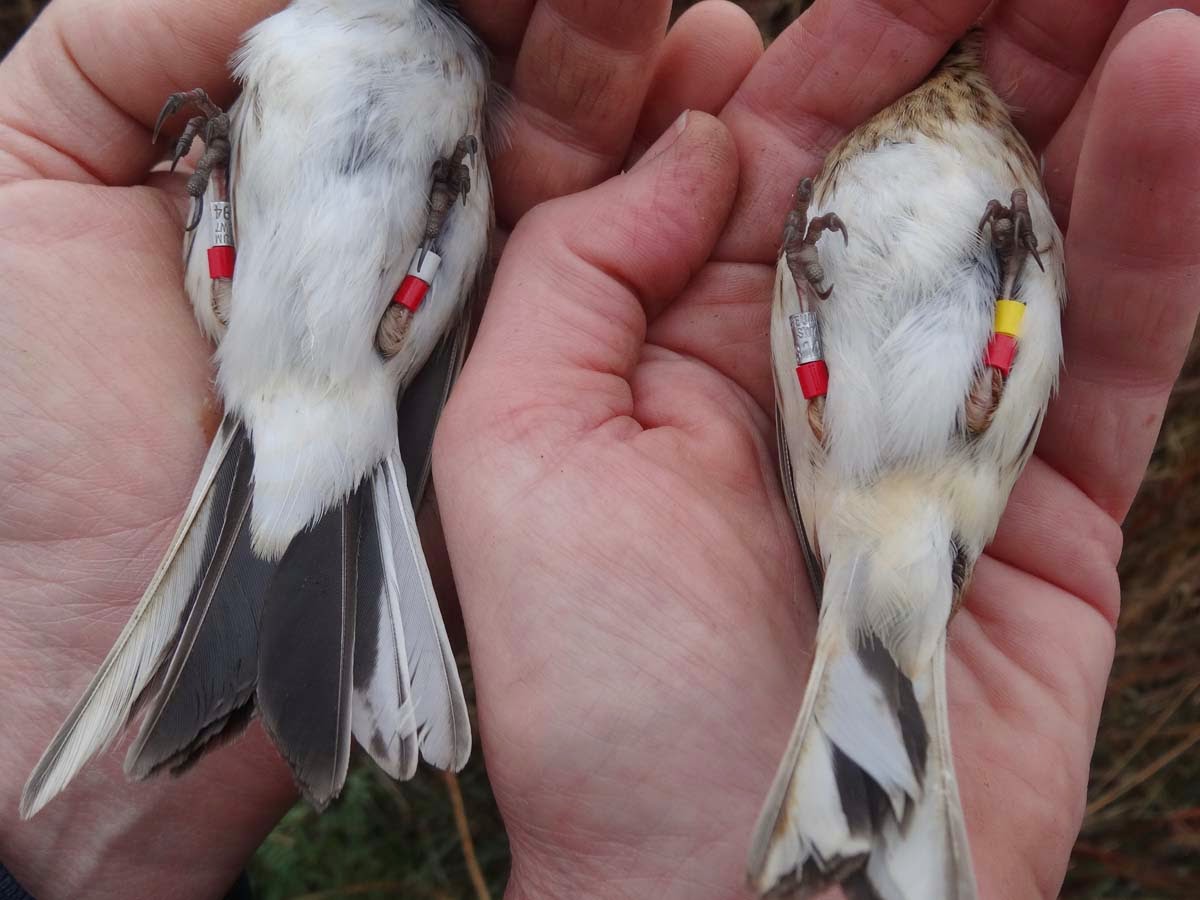 More about this project in another blog.

Some garden Golfinches and Siskins were ringed later in the day then this evening we returned to the marsh. First bird was another new species for the year - a Sand Martin. 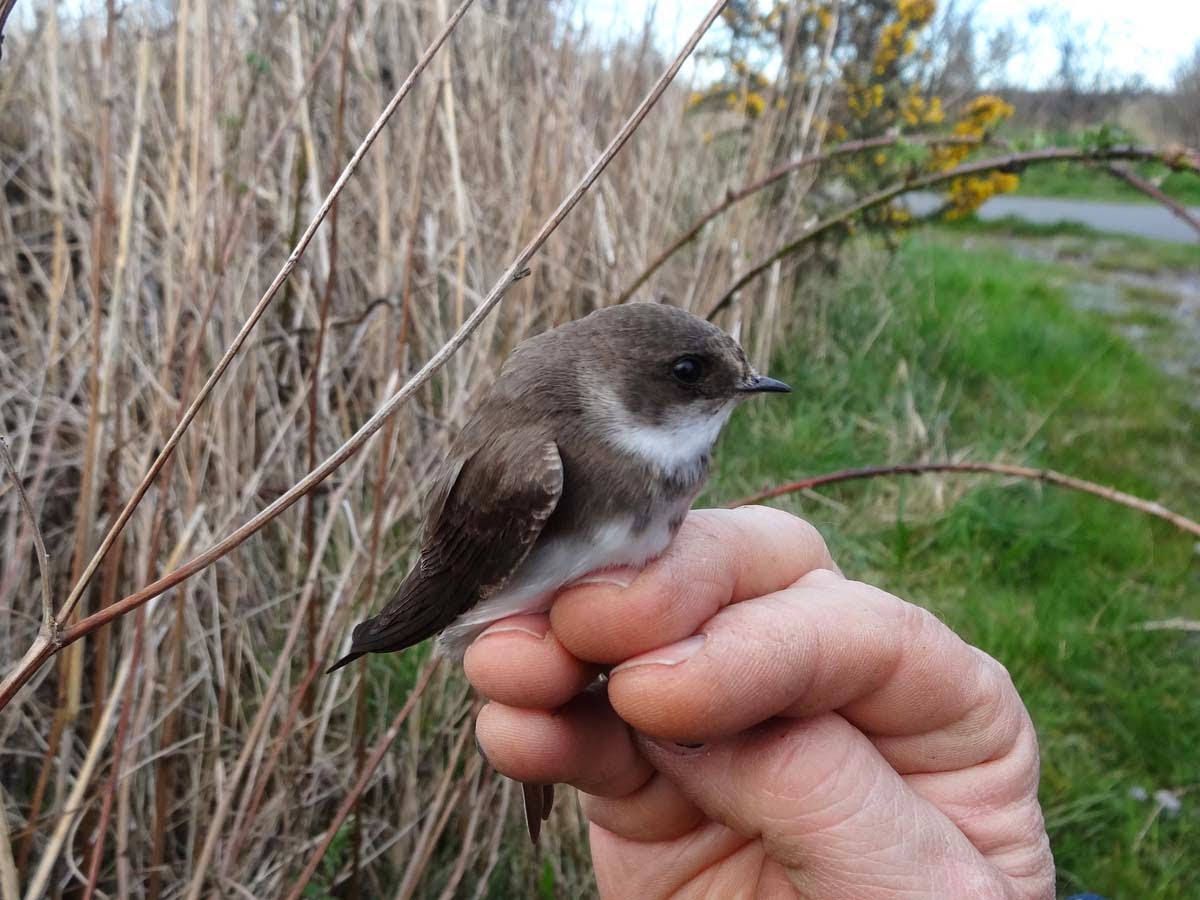 A great day but the weather might now slow us down for a few days.