Interesting news from the BTO this week that a Wood Warbler we ringed in Ffynone Wood in May 2016 was retrapped this May in a wood near Maenchlochog 19 km away. Read about this in Paddy's post on the Pembrokeshire Bird Blog
Spotted Flycatcher and Wood Warbler 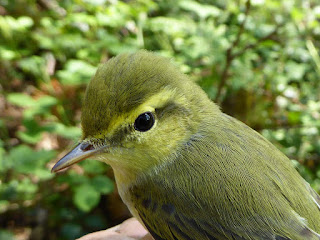 We have been continuing our Spring reed bed migration ringing for a couple of hours every morning that weather allows. Sedge Warbler numbers have been reducing after the big days 2 weeks ago. Since the first Sedge Warbler on the 8th April we have ringed 356 on the Teifi Marsh, retrapped 9 from previous years plus the controls detailed in the last blog.
As mentioned in the blog of the 6th May we have the impression that our number of returning Reed Warblers is much lower this Spring than previous years. We have had a look at some historic data to see if there is a rough trend to support our thoughts.
The graph shows a year on year comparison of new Reed Warblers (blue) and returning ringed birds from previous years (red) with similar effort to the 15th May each year. 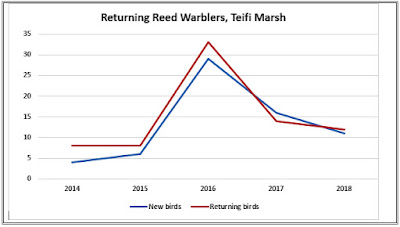 It is easy to remember the bumper years like 2016 and forget the normal baseline. Hopefully there are still more to arrive back. As we do a Reed Warbler RAS (Retrapping adults for survival) this data makes a contribution to national trend analysis by the BTO. See RAS results for more information.

Last Saturday was an unusual morning with some species not usually caught in the reed bed. A Blackcap and this Whitethroat 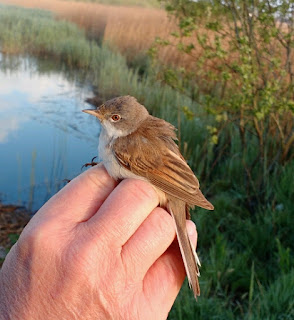 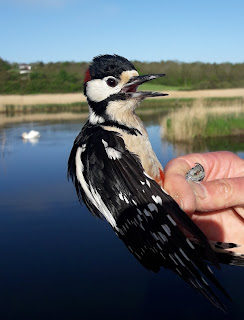 Mallard hide is an excellent base for our ringing as we can chat to early visitors to the reserve about ringing and show them birds in the hand.  Not many birds for a group of interested youngsters.. 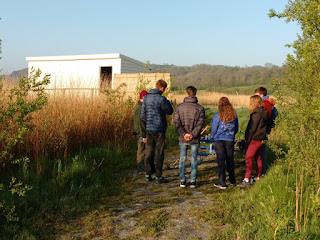 but some Sedge Warblers , a returning Reed Warbler and a 7 year old Reed Bunting provided good discussion points.
With just one Sedge Warbler ringed this morning we will be leaving the Mallard area of the reserve this week. We will return to weekly visits until Autumn migration starts at the end of July.

The first juvenile Siskins were ringed in Richard's garden on 12th May.  10 juveniles ringed which will go towards future years RAS study population (Retrap adults for Survival) at this location. 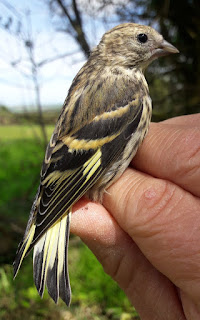 Just a few lines about CES 2 . It was a cold, delayed start as the nets were frozen. Mist was hanging over the adjacent River Teifi 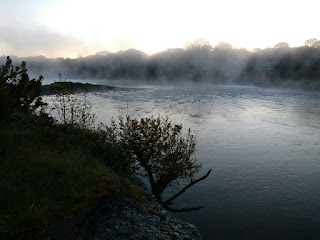 It was a quiet morning for the 5 enthusiastic trainees. Only 31 birds with no juveniles of any species unlike last year when we had many. We made the most of the time though with some useful learning points for all. By mid morning it was very hot and sunny and some emergent insects added interest like this Broad-bodied Chaser. 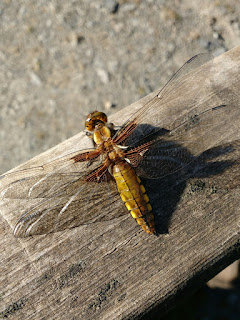 At other group sites, Karen has been ringing at Goodwick Moor and caught the first Grasshopper Warbler of the year. She has also been ringing Dipper pulli in the Gwaun Valley with a trainee. Charlie is continuing his Tree Sparrow nest box project in the Towy Vally with help from Andrew.
Two of us are off to Skokholm on Monday to assist with general ringing and to colour ring adult Great Black-backed Gulls and Oystercatchers.

In the last blog we mentioned that we had caught 4 UK Sedge Warbler controls.
The details were entered into DemOn immediately after the ringing sessions, the new online data entry programme and already we have the ringing details of all of them. 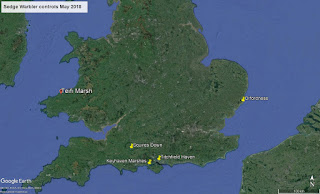 All were ringed as juveniles on autumn migration and now passing through the Teifi Marsh on spring migration.

Since the big days of Sedge Warbler migration last week, the numbers have slowed down with just 20 Sedge Warblers ringed on the last 3 mornings.
Returning Reed Warblers are still slow to return. One from 2016, also seen last spring, was retrapped this morning.
Posted by Wendy James at 09:38 No comments:

Sedge Warblers and CES on the Teifi

On May 3rd the Sedge Warblers arrived en masse though we ringed our first bird on April 8th. 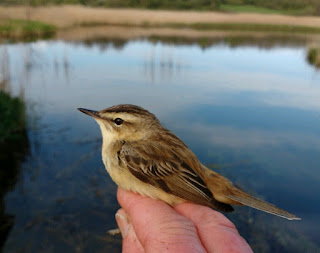 We ringed 113 new Sedge Warblers at the Mallard Pond site on the 3rd and on the 4th another 65 at Mallard plus 63 at the CES site as part of CES visit 1. On the 5th we only ringed 30, a lower catch and I expect a couple of larger catches again before next weekend depending on migration conditions. This week we have also controlled 4 UK ringed and 2 French ringed Sedge Warblers.

Though our yearly effort is biased by our trips for overseas ringing, back in 2009 we caught 144 Sedge Warblers on the 4th May - including 3 French controls and we caught 118 - including 2 foreign controls on May 10th ....large numbers are not without precedent for the Teifi Marshes
Maybe more to arrive....!!

An adult Sedge Warbler caught on the 4th May. 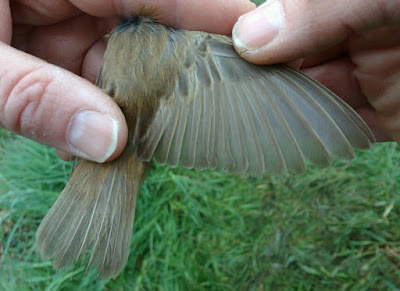 We haven't seen such a worn Sedge Warbler and presumably the bird only moulted a few feathers during the winter or survived very tough conditions.....

Only 2 foreign controls is surprisingly low this May, in the 1st week of May 2016 we controlled 9 French ringed Sedge Warblers...!! These figures may be biased by the effort to monitor Aquatic Warblers down the west coast of France, sites the 2 species share on migration in late summer. 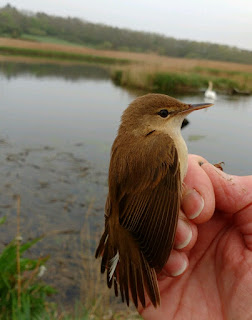 The Reed Warbler above was ringed by us in 2014 and recaptured on 5th May - good for our RAS project. Reed Warblers arrive later and in lower numbers than the Sedge Warblers, but this year their arrival appears even later and with lower numbers so far with only 2 retraps and 2 new birds.
In May 2016 the first 10 Reed Warblers caught were all recaptures of our own birds. Presumably most are site faithful breeders though I suspect some are site faithful stop over migrants as we only catch some birds during passage.

Dave Leech has just commented that at Cranwich in Norfolk the first wave of the population arrived two weeks ago with another small arrival yesterday but nowhere near numbers at start of May 2017. By comparison we have caught 4 to date. In 2016 and 2017 our totals were 24 and 15 respectively by 10th May, hopefully many more to come...

We carried out Teifi Marsh CES 1 visit on Friday May 4th. 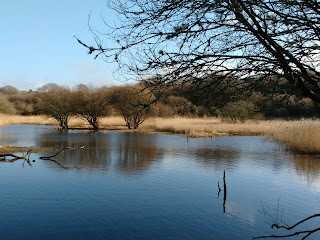 Apart from the 63 Sedge Warblers, we had a good mix of species including Whitethroat and Garden Warbler. Also some interesting recaptures...
Nice to catch a retrap Great Spotted Woodpecker as we have only ringed 8 during CES sessions since 2010. It was ringed as a juvenile last August. They are often heard on other parts of the reserve but our CES site does not have much woodland.

One of the 4 retrap Bullfinches was ringed by Chris in his St Dogmaels's garden in February, 3 Km away from the CES site. We also ringed 8 new Bullfinches, a species that seems to be increasing on the reserve. 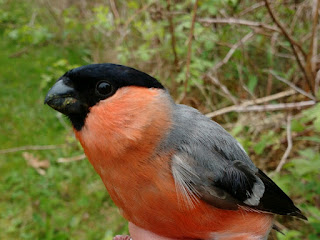 A Blue Tit ringed as a juvenile in 2012 was the oldest retrap. It has been seen each year since apart from 2017.
Goldcrests were another species not often caught at CES, just 24 in 8 years so 3 retraps in one session including one with a brood patch was unusual.
Altogether we processed 91 new birds and 45 retraps, lots of learning points for two of our trainees.

A visit to our Mallard Pond site in mist this morning, the 6th produced little, just 4 new Sedge Warblers !!
Meanwhile Karen was ringing on Goodwick Moor where only 6 Sedge and 1 Reed Warbler were captured.
We will see what tomorrow brings, and a small ringing demonstration at the Mallard site too.

Posted by Richard Dobbins at 18:20 No comments: