A clear calm morning on the Teifi Marsh on Sunday looked like perfect ringing conditions once the overnight frost had cleared but we had an extremely quiet CES 3. Just 10 new birds and 15 retraps with no juveniles caught or seen. Looking back at the equivalent CES in 2011 we caught 107 birds of which 44 were juveniles.
15 Reed Warblers from previous years have now been retrapped this spring, some having been caught every year since ringing. With just 3 x 60ft of net (shown by the red line) in this small area of the marsh it gives some idea of the large number that are hopefully breeding on the whole reserve. 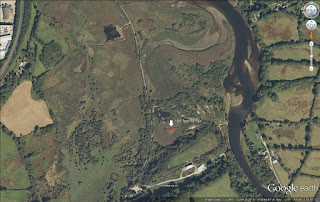 Of the new birds, 4 were Reed Warblers, 3 Blackcaps, 1 Garden warbler, 1 Willow Warbler and a Blue Tit. Hopefully we will start catching some young birds in CES 4 next week.

Garden ringing is continuing on a small scale, gaining information on the breeding success of the birds using the garden. Two magpies have been visiting the feeders regularly. A male and female were caught this week. The sheen on the wings and streaking on the throat is only really appreciated when viewed close up. 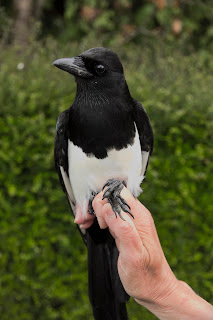 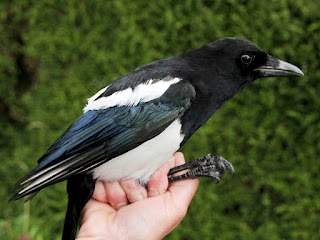 Magpies are aged by measuring the extent of the black tip on the 1st and 2nd primary. 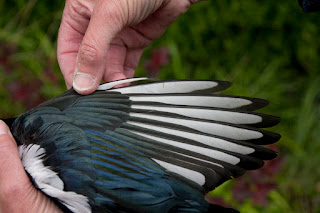 The above was an adult with the black on P1<13mm and indented, narrow shape and black on P2 13mm (16- 17mm in an immature)
Compare that with the extent of black on P2 of the 5 female ringed last week. P1 can't be seen clearly in this picture but it was broad and the black tip was 16mm. 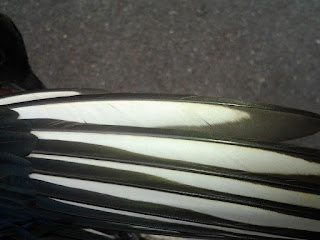 Siskins are still visiting the garden, the females now with brood patches so hopefully some young birds will be seen soon. The only juvs ringed so far have been 3 Robins.
Posted by Wendy James at 07:16 No comments:

In the last week we have ringed 102 Sedge Warblers. 101 on the Teifi Marsh and this one turned up in CJ's garden! 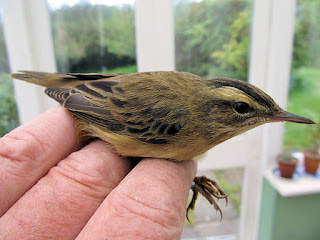 Also a French control and 2 British controls.
And one returning to the marsh from 2011.
83 were caught last Thursday when we did CES2, our constant effort monitoring for the BTO. That day we caught 127 birds with a good variety including Whitethroats, Garden Warblers, Blackcaps, Reed Warblers, Reed Buntings a Jay and only one Blue Tit. Of the retraps, some were returning Reed Warblers from the previous  4 years and a Cetti's Warbler ringed in 2009.
Last Sunday and today we had short ringing sessions over the other side of the reserve by Mallard hide. Being on a popular public path we have had some good interaction with passers by and enjoy them stopping for a chat. 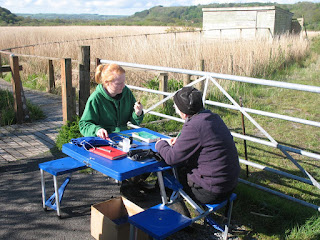 Nets box monitoring is continuing in Ffynone and Pengelli - hatching of the Pied Flycatcher eggs is awaited but 2 Blackbird nests have been predated. 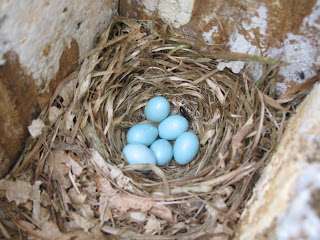 Latest news from Richard at the Breakwater station, Long Point Bird Observatory, Canada - highlights of his week have included a Bobolink (good to see him advertising Teifi Ringing Group on his hoodie!) 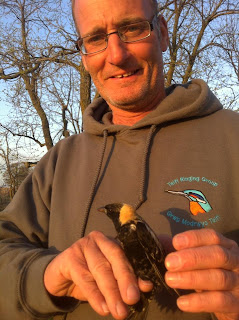 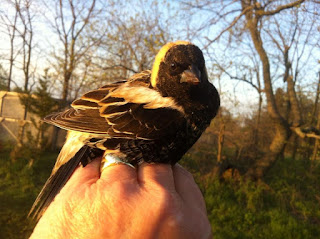 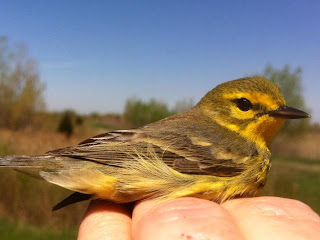 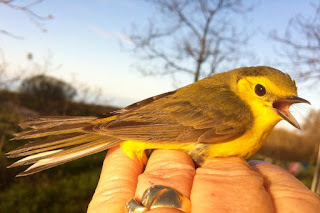 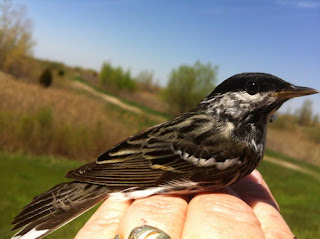 And to be topical, as one has been seen this week in Anglesey, a male Indigo Bunting 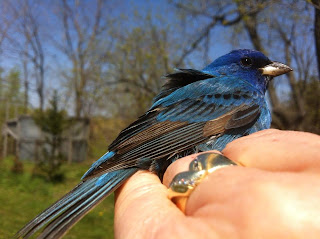 He is now back at the tip for one more week and with only limited communication from there, more pictures will follow on his return.
Posted by Wendy James at 20:20 No comments:

BTO volunteers of the future & news from Long Point

A date set for filming for TV so not surprising that the brief spell of lovely weather last week changed to wind and rain! Luckily the wind dropped enough to put a few nets up to do some ringing with schoolchildren for a Welsh TV programme. In the series, children investigate wildlife in their town. Not many people in Cardigan seem to know about a small Woodland, Coed y Mwldan, between the Co-op and the cemetary but it is alive with birdsong and well-managed by the Woodland Trust. 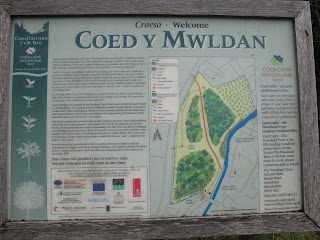 The children were very enthusiastic and asked sensible questions. Hopefully some will be inspired to develop their interest in birds further. 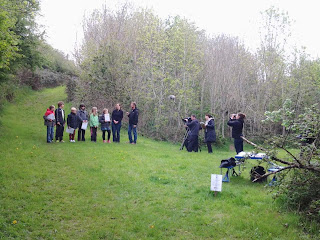 We learnt something too - Dippers are nesting under one of the bridges in the middle of town!

Meanwhile Richard has sent some news from Long Point Bird Observatory. He is currently at the small Breakwater station and is catching some good migrants despite the cold and wind.
Here he is looking very pleased that he is still banding new species on his third visit, a Yellow-breasted Chat 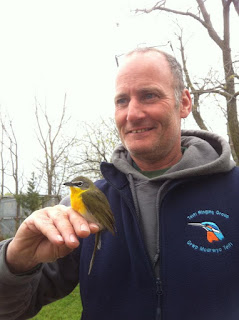 Migrant warblers like this handsome Magnolia Warbler are moving through 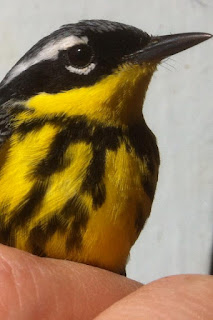 and this Orchard Oriole was Katie's (another UK ringer, from Bedfordshire) 44th species to band on her first visit to Long Point. 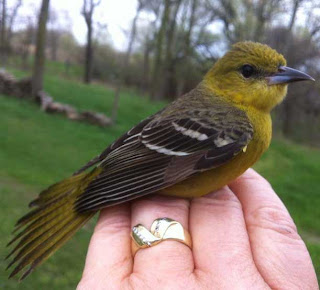 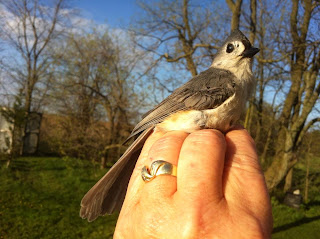 Thanks to Beverley Mcleod, who is also at Breakwater, for the photos

Yesterday was the first day of the BTO Constant effort scheme for 2013 and with the weather looking perfect we decided to go for it on day 1 and put 710 feet of nets up ready for a dawn start. Although foggy and very cold initially we started catching straightaway.
It was a day of seeing our old birds return from their migration. The oldest was a Reed Warbler, ringed by us in April 2009 and retrapped  every year in the same part of  the reed bed. 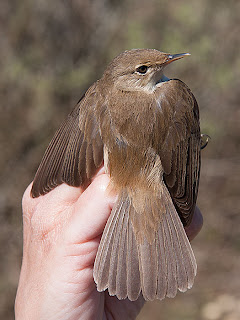 Many of our new arrivals were showing very worn feathers like this one after their winter in the sun and long flight back. Other previous years migrant retraps that faithfully return to our CES site included Blackcaps, Willow Warblers and Chiffs. Also one control Reed Warbler from the L052 series.
A total of  30 birds were ringed and 34 retraps. On our first CES day in 2009 we caught 208 of which 183 were new but that included a fall of 144 Sedge Warblers. Without those the numbers are similar)

The reeds are only just starting to grow but water level is normal compared to last year. 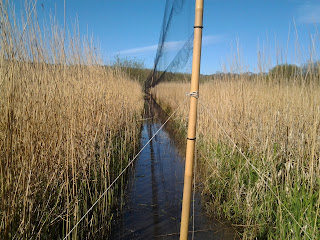 Access was very difficult all last spring and summer because of the heavy rainfall and most weeks the water level was above wader height so not possible to run all the nets. Hopefully a drier and less windy breeding season is ahead.

Meanwhile Richard is in his second week at Long Point Bird Observatory with Mick Townsend from Stanford Ringing Group.
The weather has been swinging from cold to hot but migrant warblers are now passing through. With  over 3000 birds banded at the tip this spring they are busy.
Since the last update some highlights to give an idea of what is moving north into Canada
- a 107 new bird day (too hot and sunny for many migrants to drop in) including 7 Red-bellied Woodpeckers
- a 311 new bird  day including this Evening Grosbeak, now that is big, bright and yellow! 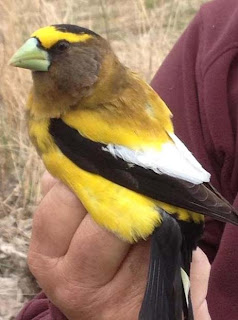 - a 133 bird day including first Black and White Warblers and Baltimore Oriole
- a 404 bird day with lots of warblers including Palm, Yellow and B&W warblers
- a 535 bird day, 56 species including Cerulean and Yellow-throated Warbler
(Dayna and Janice showing the birds here
and yesterday a Swainsson's Warbler (Long Point's photo) A first for the Tip and 3rd for Long Point.