After a break for the winter we have returned to our reed bed sites on the Teifi Marsh.
Already the site is alive once again with the sound of Sedge and Reed Warblers and a couple of Grasshopper Warblers.
One of the first Sedge Warblers back was one we ringed in 2014 and recaptured each year since. 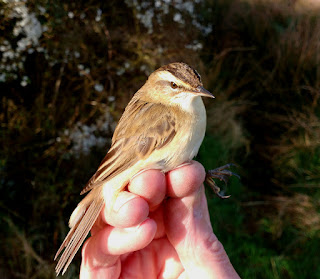 The second Reed Warbler of the spring was also one of our breeding birds, ringed in 2013.

In the last week, the number of Wagtails coming to roost in the reeds has been increasing. A mixture of Pied and White Wagtails have been ringed 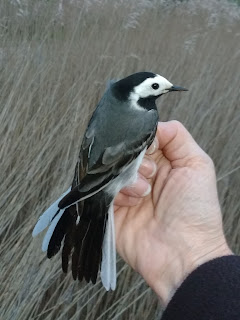 but the surprise last night was seeing a Yellow Wagtail perched next to the net.

Our work with Linnets continues at Mwnt . A good number of birds ringed in the breeding season last year are now returning. Other species are caught at Mwnt too and last week we caught one of the twelve Wheatear stopping off on the headland on their way north. 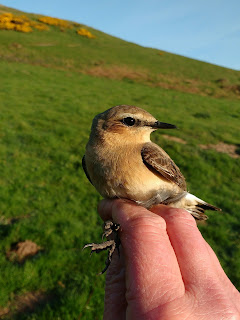 Not all of the Linnets ringed by the group are caught at Mwnt though. A surprise this month when one was feeding in my garden on sunflower hearts. A new species for the garden possibly meaning that there is a shortage natural food. 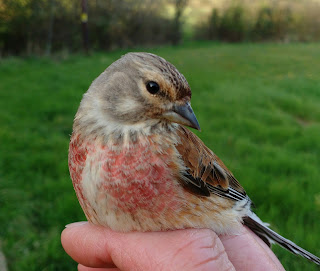 The appearance of this bird coincided with a big passage of Goldfinch that many commented on.

Some Finch recovery news;
One of my garden Goldfinches ringed in October 2015 was killed by a cat in Suce-sur-Edre, Loire-Atlantique, France this March. (567km, 495 days)
Finches do move around the country in seemingly random ways. A Siskin that was ringed in Richard's garden last March was in Shepbster, Highland this March 729 km away. A local breeding Siskin ringed in Richard's garden last June was found dead in Berrynarbor, Devon this March after contracting Trichomonosis.
A Lesser Redpoll was fairly close to it's original ringing site in Lower Cwmtyrch, Powys (May 2016) when it was retrapped in Charlies garden this March (27km 314 days)

Charlie has been busy reviving a Tree Sparrow nest box scheme in the Towy Valley. Details of this project from him in the next blog. 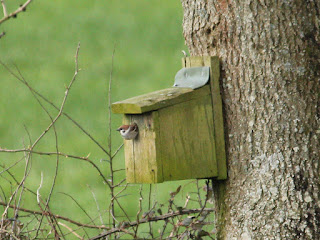 Meanwhile some of the group are ringing away from the UK. Richard is in Cyprus for 5 weeks and 3 of us are off to Gibraltar Bird Observatory next week.

***Sunday morning update
Karen has just caught a French ringed Sedge Warbler at Goodwick Moor. This is another reserve managed by the Wildlife Trust of South and West Wales that she has worked hard at over the winter to prepare as a new ringing site.We caught 16 control Sedge Warblers on the Teifi Marsh last spring so hopefully some more to come in the next couple of weeks.

Linnets, a Swan, and some French people

Our Linnet RAS project started up again at the beginning of April. Having re-trapped only 4 of our breeding birds from 2016 at the site since mid-October, it was very gratifying to suddenly get 11 of them in a catch of 35 earlier this week. Where have they been?  Where have the ones we've been catching all winter gone now?  We desperately need other Welsh ringers to make an effort to catch more Linnets to help us find out.  That's 747 of them ringed in a little under a full year, with no controls found here, or recoveries reported from elsewhere. 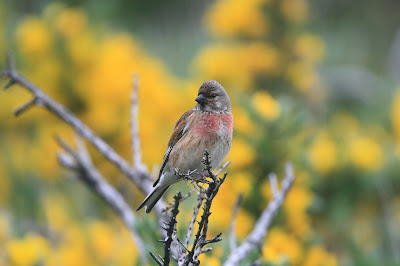 Yesterday afternoon while putting up some nets on our scrubby site beside the river Teifi, we noticed a single Mute Swan fly in and settle on the river. We also noticed that it was carrying a blue plastic ring with white numbers on it, so we knew it wasn't one of our resident pair (who just have normal numbered metal rings).

Today, while we (well, Wendy mostly) were doing a ringing demo for some attentive French students on a field trip, the swan was still there, but as he (we decided it was a he) spent all his time facing into the current and with the ring being on his left leg, it was nearly always out of sight.  Eventually however he swam over closer to where we were ringing, offering tantalising glimpses... 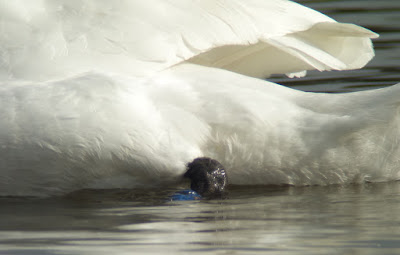 ... before waving his leg in the air while preening - but the numbers on the ring still couldn't be seen... 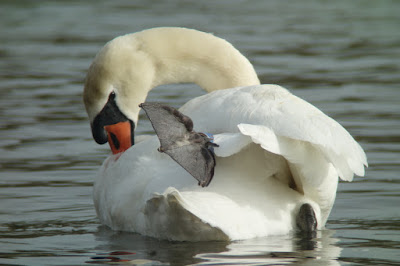 This went on for what seemed like ages, but eventually, thank goodness, he let himself be identified, so hopefully we'll soon find out where he's come from. 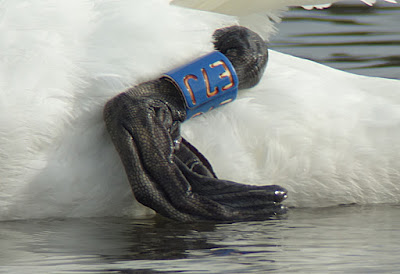 It's hard to imagine a more idyllic venue for doing a ringing demo, although it was a bit on the nippy side for a while - 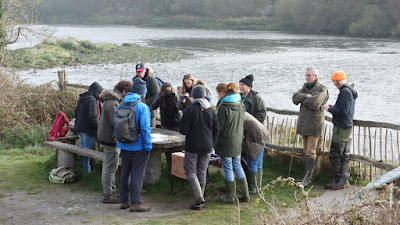