A quick summary of the last month before four of the group head out to South Africa.

Windy weather has hampered much ringing but various other trapping methods as described in the last blog have been used successfully. The most interesting species was the capture of 3 Yellowhammers in a field adjacent to my garden near Llechryd. 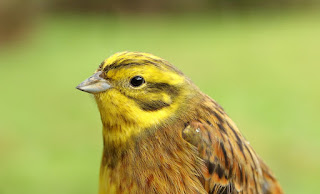 In recent years they have been seen very occasionally a few miles away but with no arable farms anywhere near they were a real surprise. They came to a seeded area for catching with a whoosh net. 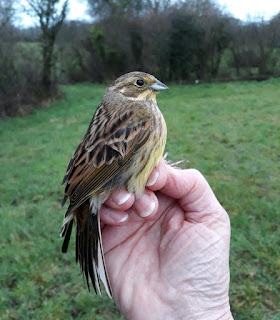 The land is probably too wet for a planted cover crop to work well but something to think about.

Chris has been visiting Mwnt regularly over the winter but until recently the usual wintering Linnet flock had been missing. A successful first catch of the year last week with a flock of about 50 seen and 42 new and 2 retraps from last year.

Charlie and Andy have managed some good training sessions. We now have 6 enthusiastic trainees. Many Siskins are visiting Charlie's garden at the moment. 123 caught on the 5th Feb kept Sion and Alison busy. The adult males are looking very smart now. 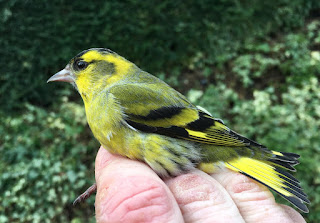 Reed Bunting ringing has been a success this winter with 78 new birds colour ringed. The part of the Teifi Marshes where we catch the Reed Buntings is also where we concentrate our efforts for migration monitoring. A commercial cut by a Thatcher in this area make it ideal for passage White Wagtails in April, Snipe and Jack Snipe are still around to be caught and Water Pipits occasionally venture into the new wet stubble too.
This year's cut is in progress this week. 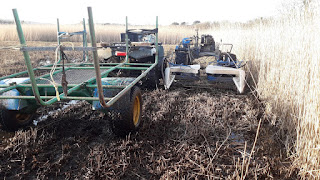 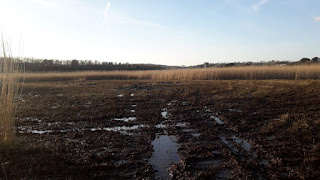 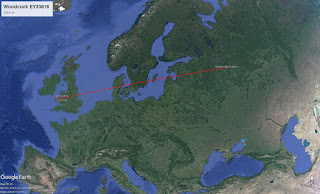 A movement within the group from Chris to Andy
Siskin ringed on 27-APR-2016 at St Dogmaels, Pembrokeshire
Subsequently recaptured at Bancyffordd, Llandysul on  06-JAN-2019
984 days Distance: 27 km (ESE)

Trapping at Mallard Pond.....and beyond 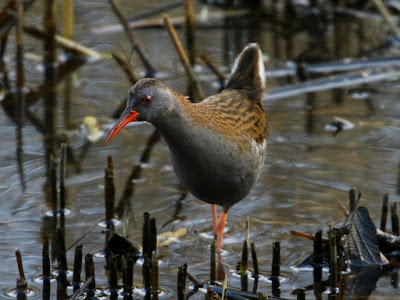 He wandered in ...for Millet
(a different Water Rail to this one photo'd by Dyfed near Kingfisher Pond earlier this week) 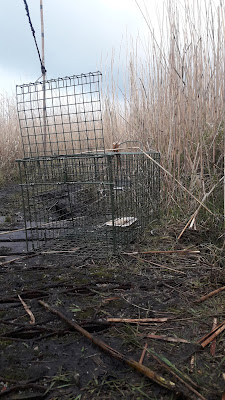 Not in the large Potter Trap baited with cat food.... 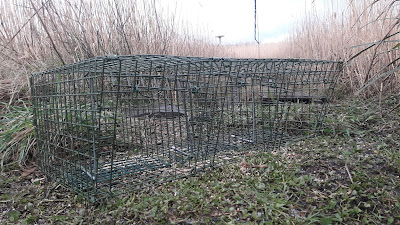 ...but in the middle trap of this compartmental trap with three independent doors and catching boxes.

We did catch 5 Reed Buntings this morning, 3 new and 2 retraps, thus no concern of birds being trap shy on the trap's first outing !

We have to balance general feeding of the area to keep the Reed Buntings at Mallard Pond, providing opportunities for our following of  Reed Bunting photographers who are invaluable for recording colour-ringed birds. This was one of several sent to us recently by Colin Dalton of an old male ringed in 2013, regularly seen around Mallard 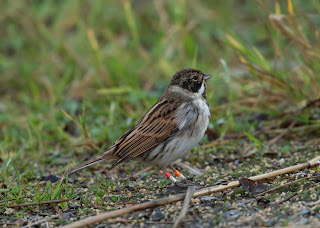 We also like to catch with a mist net when possible or with even more precise baiting of the traps when conditions dictate.
The general feeder for Millet postioned towards the far end of the 18m net ride 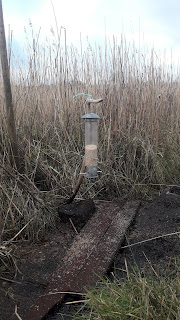 Karen having a closer look at feather wear on the Water Rail. 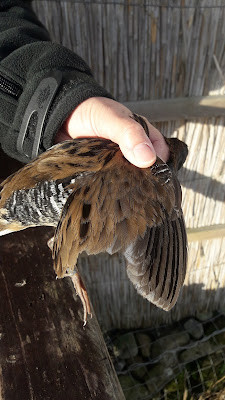 We returned to Mallard this morning with Andrew - 3 more new Reed Buntings colour-ringed.

Third Wheel have supplied us with our latest traps including the interesting 3 compartmental trap shown above. 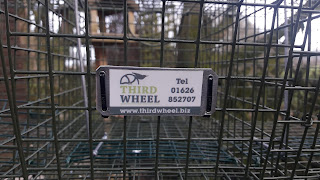 See their website for further details if interested in various traps.
Wendy has also positioned a Whoosh Net below one of her hedgerows, a new venture using the same trap and methods as Chris uses at Mwnt for  his Linnet RAS study. 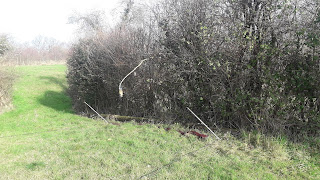 Posted by Richard Dobbins at 19:02 No comments: