We have the equipment to catch Storm Petrels at more than one site, and as we don't catch many along the Ceredigion coast, operating at two fairly close sites seemed an interesting idea.
Last night was our first attempt - 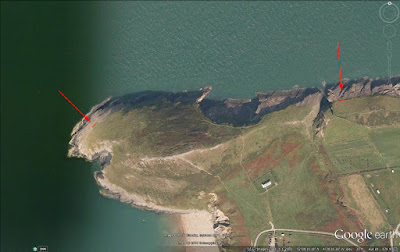 Two nets and sound systems were set up, one each side of the headland 480m apart. The light southerly wind made it possible last night.

At our older more westerly site we trapped three stormies (at 2340, 0110, 0120)
At our newer site Chris and his small team caught six including one control, and interestingly no stormies trapped before 0050. There was also no interchange of birds between the two sites.
Our most recent catches have been of one, five, five and seven stormies when only using one site.

A pity our stormie catching season is so short and weather dependent as our findings seem interesting....

Posted by Richard Dobbins at 15:28 No comments:

Stormies later..in fact in the early hours of tomorrow!

Our migration monitoring at the Mallard nets on the Teifi Marsh is underway. 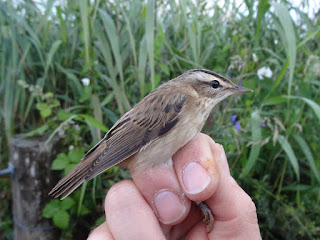 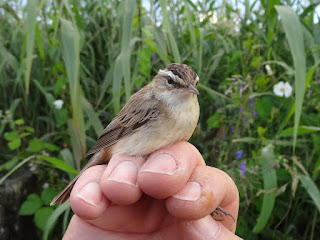 Quite often we miss the adults going through. Catching unringed adults and not retrapping any of our own breeding Sedge Warblers suggests ours have started moving and these adults are from elsewhere.
This pattern of movement is consistent with previous years. 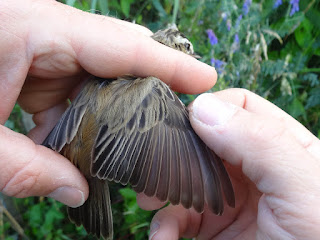 This is quite a smart wing for a breeding female at this time of year.
Hopefully the weather will allow us into Mallard in the morning after Stormies at Mwnt tonight...
Posted by Wendy James at 09:17 No comments:

15 juvenile Reed Warblers were the highlight of CES 8 on the Teifi Marsh this week. 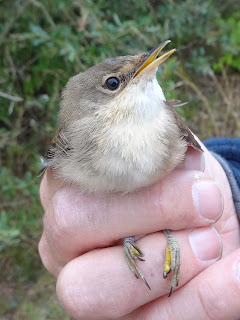 A total of 68 birds were caught with 56 new including 11 juvenile Chiffs. A young Whitethroat was the first of the year.
The following morning we ringed at our two other sites on the Teifi Marsh adding another 70 birds including  more juvenile Reed Warblers and the first Sedge Warblers of autumn migration. Also more Reed Buntings for our colour ringing project. Local photographers are still keeping their eyes open for ringed birds. 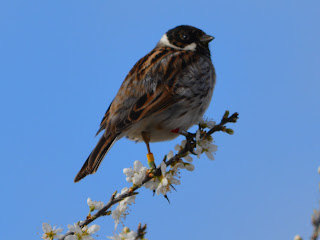 This adult male was re-sighted several times over the winter on the feeders at the Wildlife Centre, around the car park and now regularly seen near creek Hide. Thanks to Fred Cripps for this picture.

The Teifi Marsh is an important stopover for migrant Sedge Warblers with 3,024 ringed since 2009. Several have been controlled as they migrate south across England and the west coast of France but few from further north so good news this week from the BTO of a Sedge Warbler ringed on the Teifi Marsh in May 2013 and controlled by Kelvin Jones (BTO Cymru) at Llyn Ystumllyn near Criccieth,  in June this year as a breeding female. (100km) 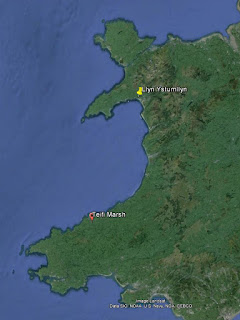 As well as ringing on the Teifi Marsh, Storm Petrel ringing is being fitted in whenever there is a rare calm weather window. Last night another 7 were ringed at Mwnt before today's persistent unseasonal rain started at 2am. 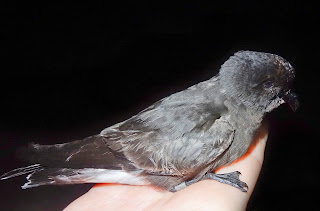 Posted by Richard Dobbins at 15:43 No comments:

An old acro, a new grasshopper ...and a stormie

Chris and Wendy opened the Pentwd nets yesterday morning whilst preparing more rides for the acro migration season ahead. 25 birds caught of which L531065 stands out !
L531065 a Reed Warbler was ringed as a juvenile in the nearby Mallard run nets (by Wendy !) on 11/08/2010 and surprisingly never captured since.
The 3JP Grasshopper Warbler was the first juvenile since 2013. One adult earlier this year surprisingly our only bird since. 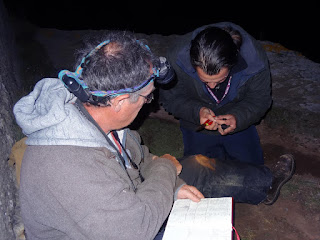 Ryan, our trainee, came down from Aberystwyth for a small Storm Petrel session at Mwnt last night. We were disappointed with only one bird, but Ryan was happier as it was the 30th species that he has now ringed.
Our low catch seemed to be mirrored by Skokholm where they only managed 16 birds at a site away from the colonies. They usually catch 100+. But Mark Grantham in Cornwall caught 75 - suggesting the northerly wind had moved these predominantly non-breeders temporarily south...


Friday update...
Last night on Skokholm Island a much better catch of 180 Storm Petrels. One in 15 were already ringed, 5 were ringed on Skokholm last year and 7 were ringed elsewhere. Had the wind changing round to the south and cloud cover made the difference? So many variables to consider when planning a Stormie session, not just the moon and wind speed.
See Skokholm Blog

Posted by Richard Dobbins at 14:07 No comments:

Eighty-three captures of 18 species at CES 7 yesterday morning.
Meanwhile Chris was with Ryan at the Pentwd nets on the Ceredigion side of the reserve, where they captured a further 28 birds and a further species, Sedge Warbler. 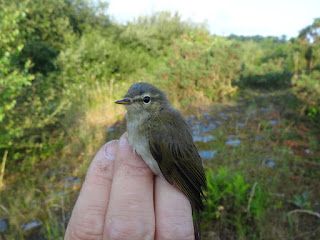 Chiffchaffs and Blackcaps both reached double figures at CES. 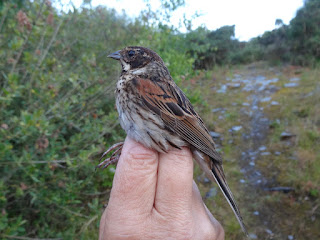 This Reed Bunting was ringed on the reserve in 2013 and colour rings added last year for our RAS project. 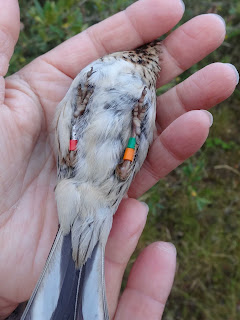 Other highlights of CES were Treecreeper, a Kingfisher and this juvenile Redtstart 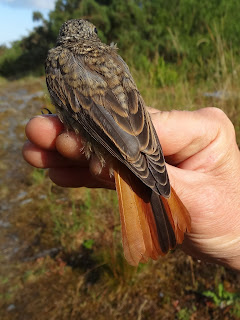 To add to the day's species for the group, Siskins, again for a RAS project and Greenfinches, Goldfinches and House Sparrow were all ringed in Boncath. More on the Siskin RAS at the end of the breeding season when they appear to leave until February.

The final species of the day was achieved with 6 Storm Petrels at Mwnt. 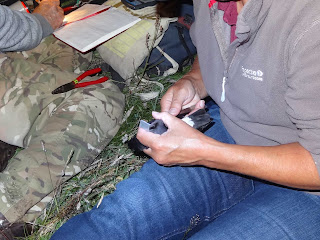 The scene at 10pm last night with 2 nets in a new location so we have different options depending on the wind direction.. 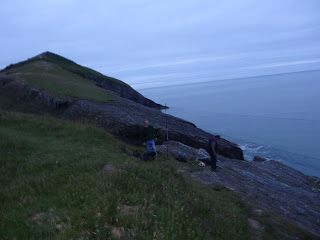 Just returned from preparing for ringing in the morning at our Mallard reed bed site on the Teifi Marsh. Great to see juvenile Swallows already in numbers - hirundine roost ringing can't be far away!
Posted by Richard Dobbins at 22:16 No comments: 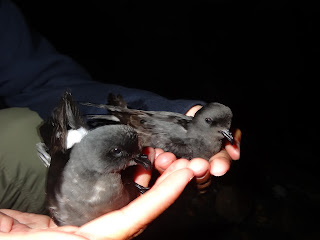 A French control topped the catch, with two British controls and a 101 new Storm Petrels !
We were down at the western tip of the Dale peninsula at the best stormie catching site on mainland Pembs. 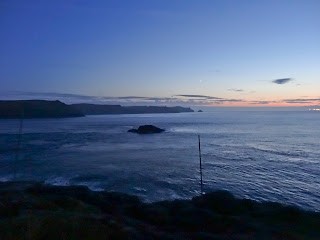 Here you can see Skomer offshore, and Skokholm with it's 2000 pairs of Storm Petrels is a little further south. This catch was arranged by Steve and the Pembs RG, and we were asked to attend with additional sound from the Teifi ! 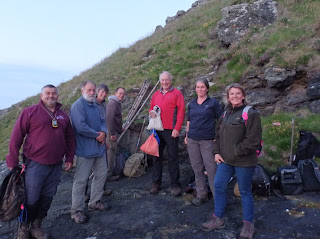 Steve has been ringing Storm Petrels here since c1977, and Bob and I first ringed stormies here in 1984 ..so bring on some younger ringers, and a party of five staff and field workers from Skomer joined us. 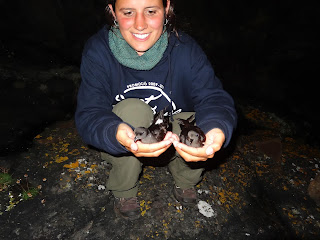 Below the positioning of two of the nets on the cliff at Wooltack Point. 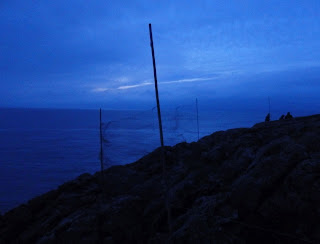 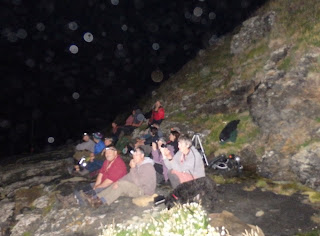 We shall be returning to our patch and hopefully continue to catch small numbers at Mwnt and maybe Ceibwr as we develop our understanding of Storm Petrel movements within Cardigan Bay,
- maybe even find a new breeding site.......?
We will also plan a few sessions in at the reliable and potentially larger catching site of Strumble Head. 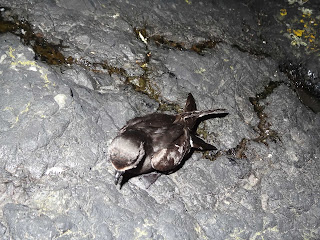