We completed CES 6 today with an extra early start to beat the heat. A total of 50 birds, 34 new and 16 recaptures.
We would have expected more migrant species like Garden Warblers, Whitethroats and Willow Warblers but only 10 of the 34 new were migrants. Rather nice though were two Redstarts, both males in wing and tail moult. Only 6 adult Redstarts have been ringed at CES on the Teifi Marsh since 2009. 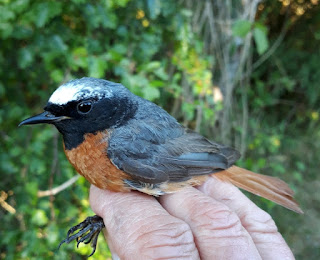 Juveniles of some resident species seem to be around in good numbers particularly Robins and Dunnocks but few Blackbirds.
Other less common juveniles today included a Great Spotted Woodpecker, Treecreeper and a Kingfisher. 13 juvenile Kingfishers were ringed on the reserve last year so it will be interesting to compare this years total.
We are still not hearing or catching any Cetti's Warblers since the Spring cold spell. It does look like they have moved away from the reserve or perished. At least 6 territories last year around the Marsh last year.
A few more insects are around the reserve this week with several Scarlet Tiger moths on the reed bed edge plants. 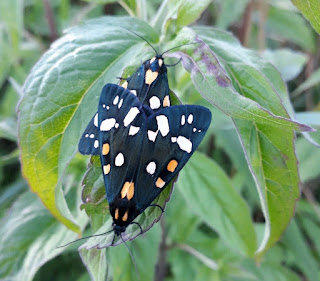 Black-tailed Skimmers around the edges of Mallard pond too, a fairly recent coloniser to the Teifi area.

We look forward to the next CES in the hope that a late breeding season for some birds may produce our missing juveniles.
Posted by Wendy James at 16:42 1 comment:

An exciting recovery of one of the 350 Sedge Warblers ringed on migration through the Teifi Marsh this spring. 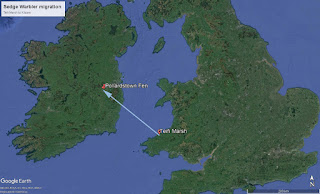 AED8024 was ringed by us at Mallard Pond on the 13th May after the days of peak migration were over. It was caught in Ireland on the 9th June, a breeding female with a brood patch.
Pollardstown Fen  is a CES site for Irish Midlands Ringing Group, looking very similar habitat to the Teifi Marsh. This recovery adds weight to our thoughts that the Teifi Marsh is a stopover site before the migration hop over the Irish Sea to breeding sites in Ireland.
We do have a small breeding population of Sedge Warblers on the reserve and this evening we caught the first juvenile. 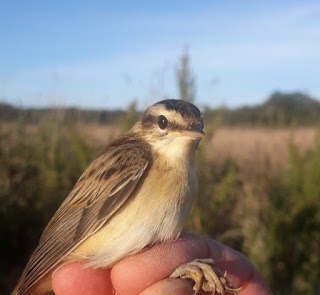 Also we caught an adult female Sedge Warbler with a brood patch 4 that was ringed in France at Treogat, Finistère in August 2015. We had previously caught it in May 2017 which is how we know the ringing details already.

Yesterday the wind finally eased for us to complete CES 5 on the last day of the cycle.
We caught 60 birds, mostly juveniles of resident species including Treecreeper, Bullfinch, lots of Robins, Wrens and Dunnocks. Compared with the previous 7 years this was the lowest. Starting with the bumper year of 2011 the totals were  130, 73, 100, 71, 91, 79 and 80. The most unusual bird was a House Sparrow, the first for our CES. We also caught the first juvenile Reed Warbler of the year. 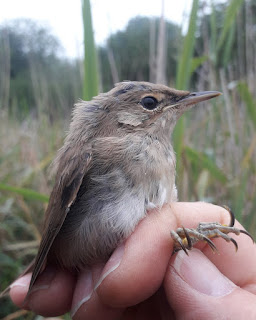 Our Linnet RAS project is continuing at Mwnt with the first juvenile Linnets now fledged. At the last visit we caught some additional species with 2 Magpies and a Stonechat in the Whoosh Net between Linnet catches and another Stonechat and a pair of Wheatear in Spring Traps. 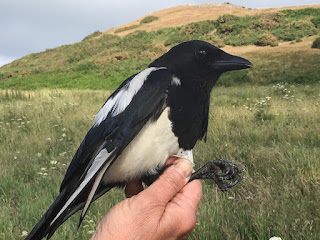 (photo Andrew Hughes)
Also at Mwnt we catch Storm Petrels but unfortunately the best phase of the moon for dark nights was persistently windy. A brief lull in the wind one evening saw us rapidly plan a visit and we ringed two. 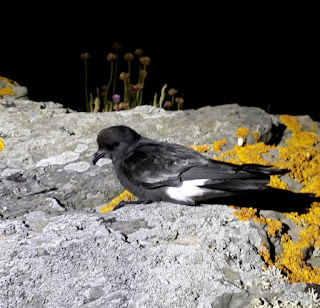 Once the full moon passes we will be trying again, hoping to add more controls and recoveries to our map. 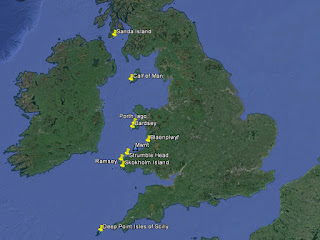 This blog is a summary of my first attempt to catch a Cuckoo on Fygyn Common.

It's that time of the year when Cuckoo's start their journey south to the Congo. They only spend about 2 months in the UK and the remainder of the year in Africa.
The Cuckoo population has halved in the last 25yrs and the conservation status is currently red.
The BTO have embarked on "The Cuckoo Project" to understand the full annual cycle of the Cuckoo that would help them make informed decisions. There are some studies that have beed done in the UK breeding season but little is known of what happens when they migrate back to the Congo. Below is a link to the project that is a very interesting read.

Annually every spring I have Cuckoo's on my Fygyn Common site in Carmarthenshire on the southern edge of the Brecfa Forest. This year I got my permissions in place to use sound with the fantastic support and trust from the BTO, albeit I was a little late sorting it all out.

I also got advice from the BTO website on the best way to catch them, supported by a video.

My first trip was planned for the 18th May, however it was a little late in the season. 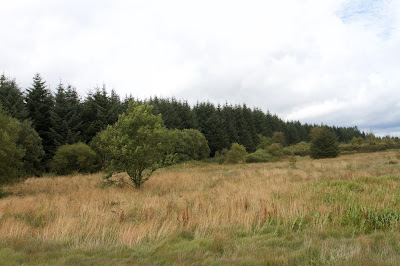 In preparation for this I sorted a couple of potential places to erect a net. On Fygyn Common there are a few areas where the trees are too high but other areas have small bushes and trees that are more suitable. Cuckoo's will respond to sound and perch on top of the tree near the sound, so lower the better. When they hear the bubbling sound of a female they swoop down and hopefully into the net. 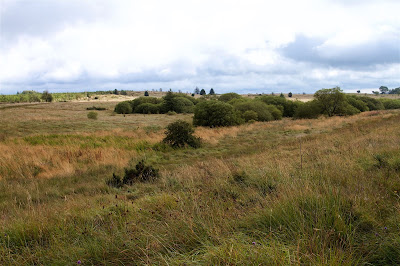 On the day the net was up at 06.30am and a Cuckoo decoy was positioned by the sound system which was placed in the middle of the net. Cuckoo could be heard calling some distance away. 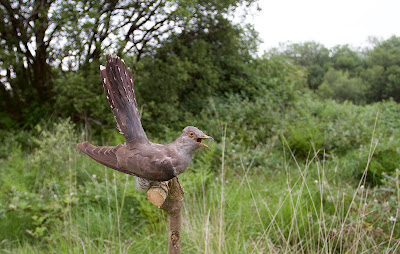 As soon as it was switched on a Cuckoo was seen flying straight towards the tree attracted by the sound to investigate. I was retreating quickly to hide behind some Gorse bushes so as not to frighten it off. As soon as the female bubbling sound came on the Cuckoo became very excited and swooped down flying into the net. it was all over in less than 5mins.

The male bird was ringed and processed and whilst I had it in my hand 3 other males flying together past over me and I also heard a female bubbling. So I feel confident there are at least 5 Cuckoo's hanging around the Common. 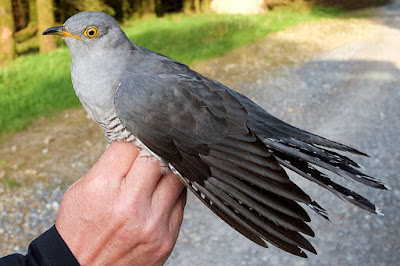 Time for a net move deeper into the Common and this time there was a lot of interest in the sound, even when the female bubbling sound came on. However they just would not come into the net. I have concluded from this they were probably familiar with the sound which made them cautious but I hadn't got a different sound to try.

Subsequent visiting days later I was experiencing the same thing, birds come to the sound but not flying into the net.

And I thought it was going to be easy after catching the first Cuckoo within 5 mins. I have plenty of time to ponder, wonder and prepare myself for spring 2019.
Wouldn't it be exciting if the BTO were interested in putting a Satellite Tracker on a Fygyn Common bird next year.

Posted by Charlie Sargent at 22:12 No comments: