Today we were banding at InBioparque in the capital San Jose. A standard CES type site, within a park with objectives much like Regents Park in London but smaller. Migrants in evidence here, with a Canada Warbler, several Chestnut-sided and a great surprise to see a Worm-eating Warbler 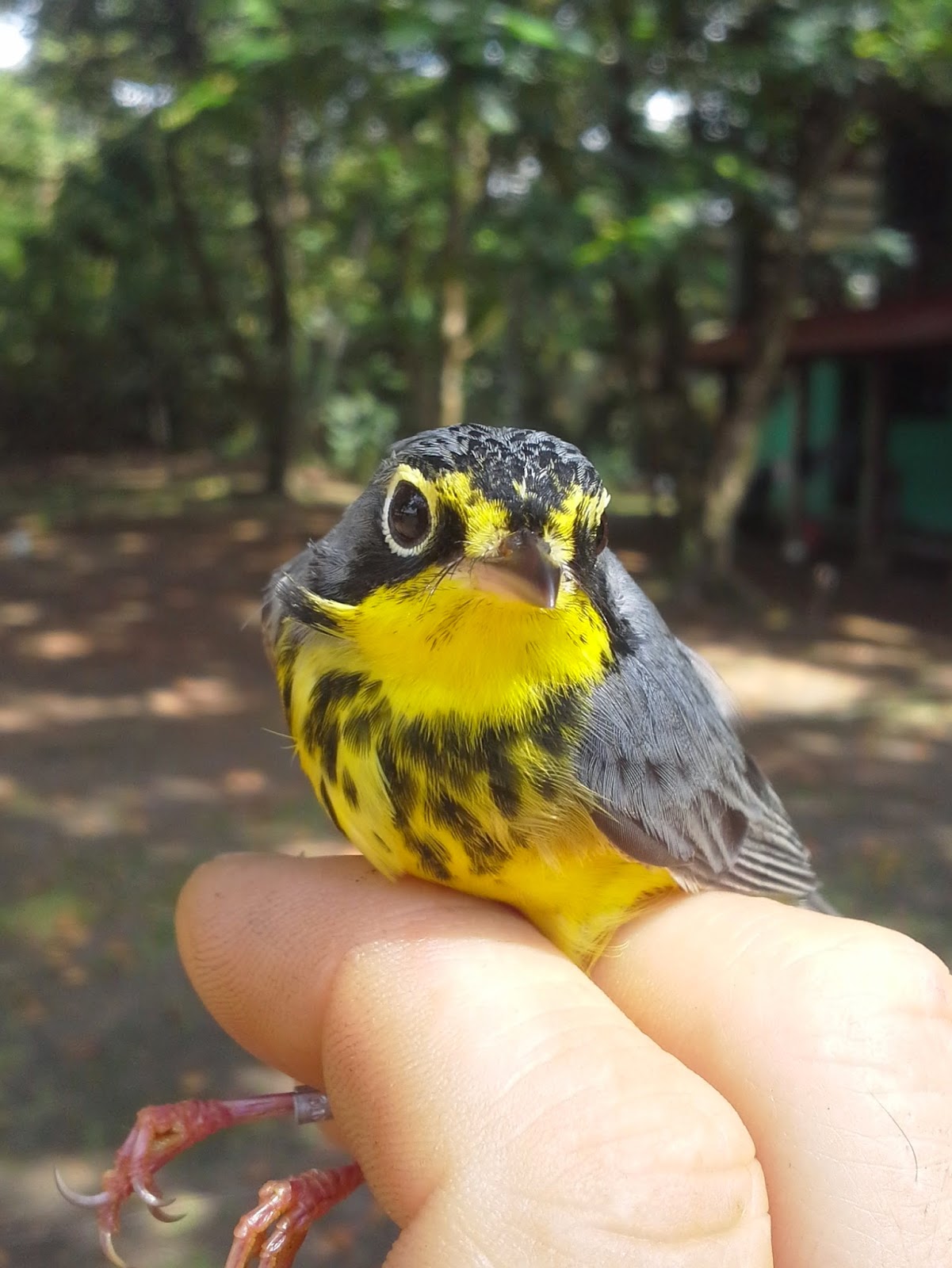 The above photo of a Canada Warbler was taken at our Tortuguero site, more on banding there later...
...back to InBioparque...
I don't associate this inner city site with good hummingbirds...today I was proved wrong. Following a regular Rufous-tailed, show below.. 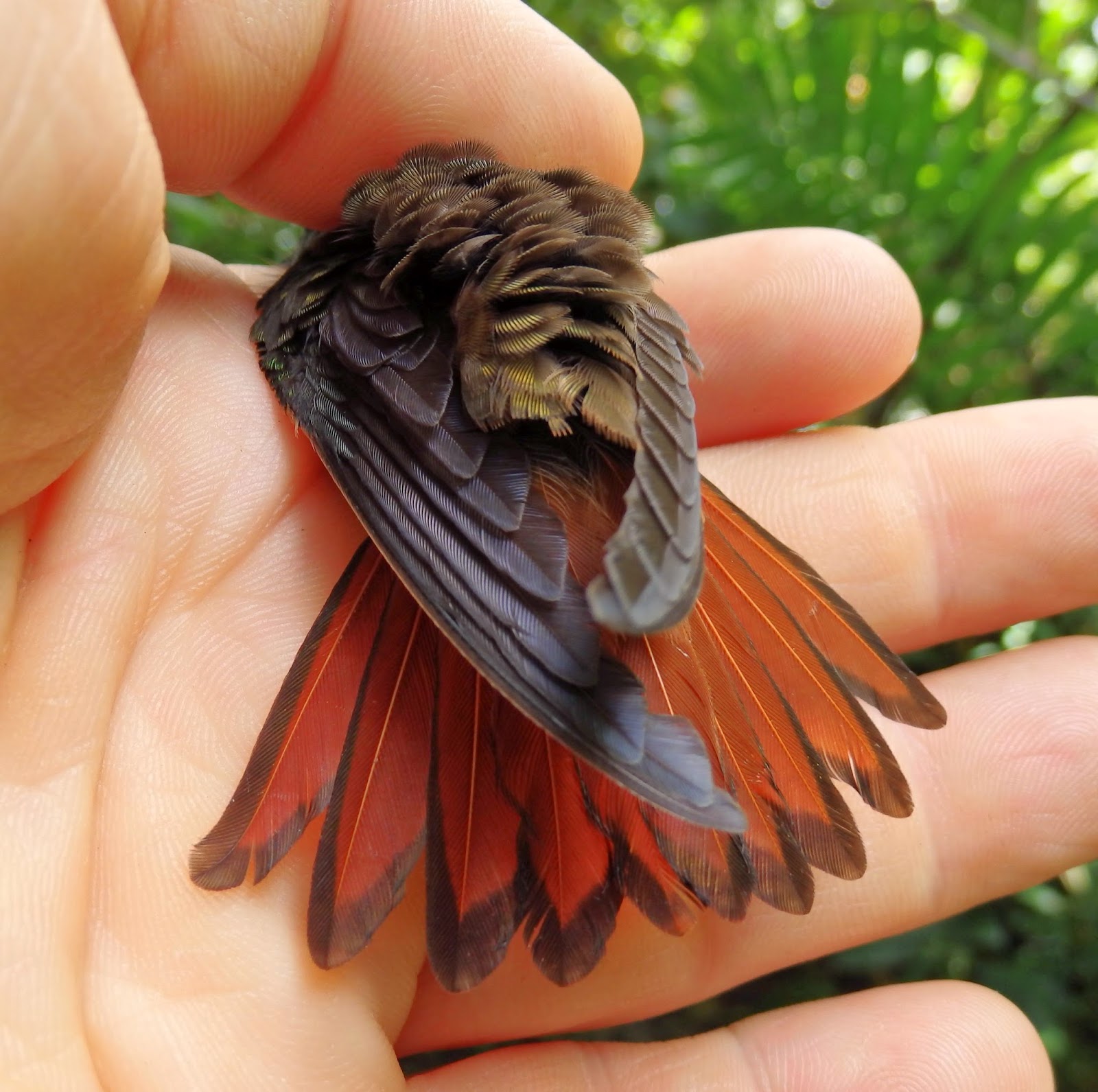 A  new species for me, a Steely-vented Hummingbird with a different but equally stunning tail. 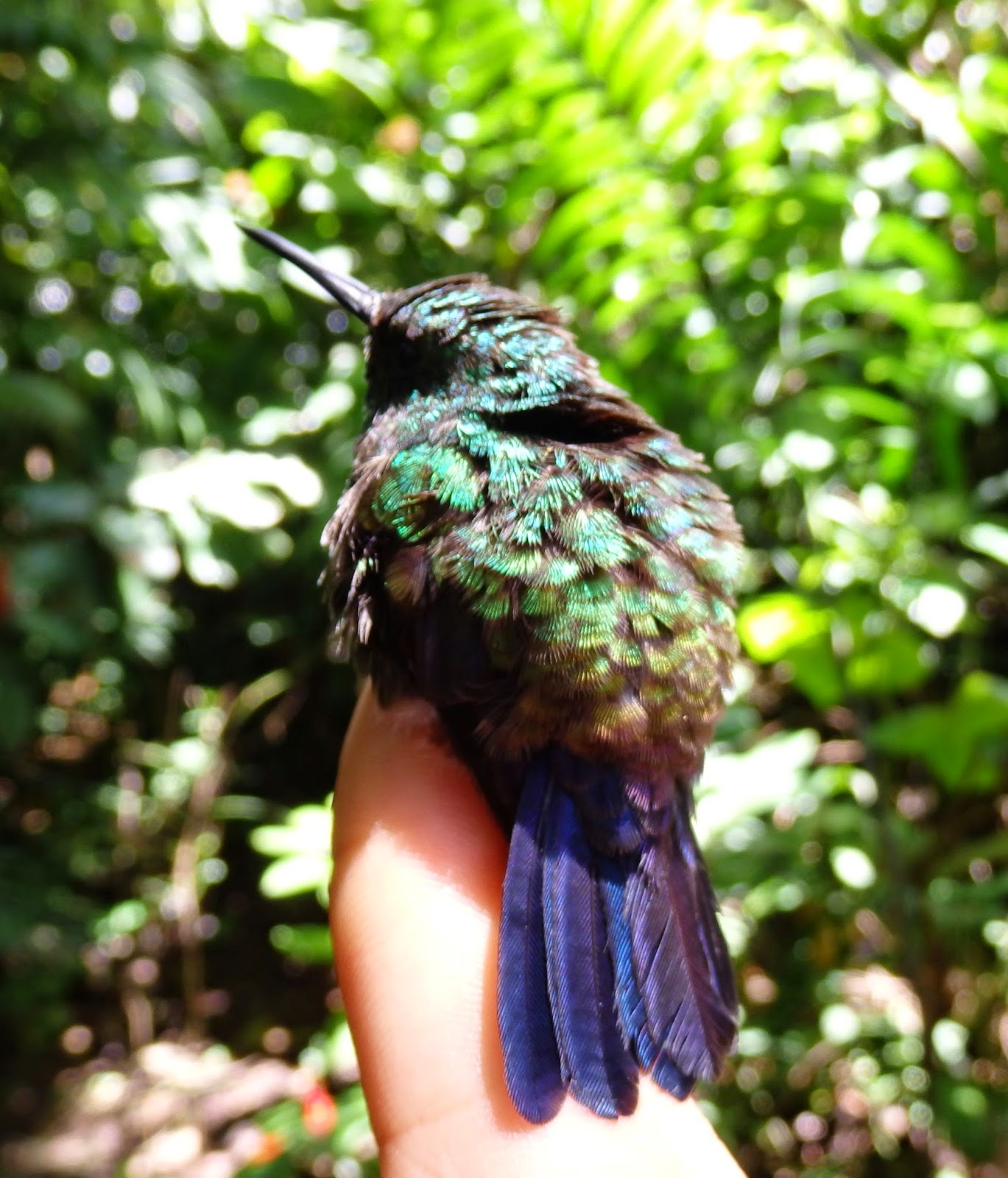 In some hummingbirds males perform at a lek, where tails may have a role. These two species don't lek but are very aggressive towards others. As well as the steely-tail in the photo below, note the standard wing measuring technique taught and used across the Americas... 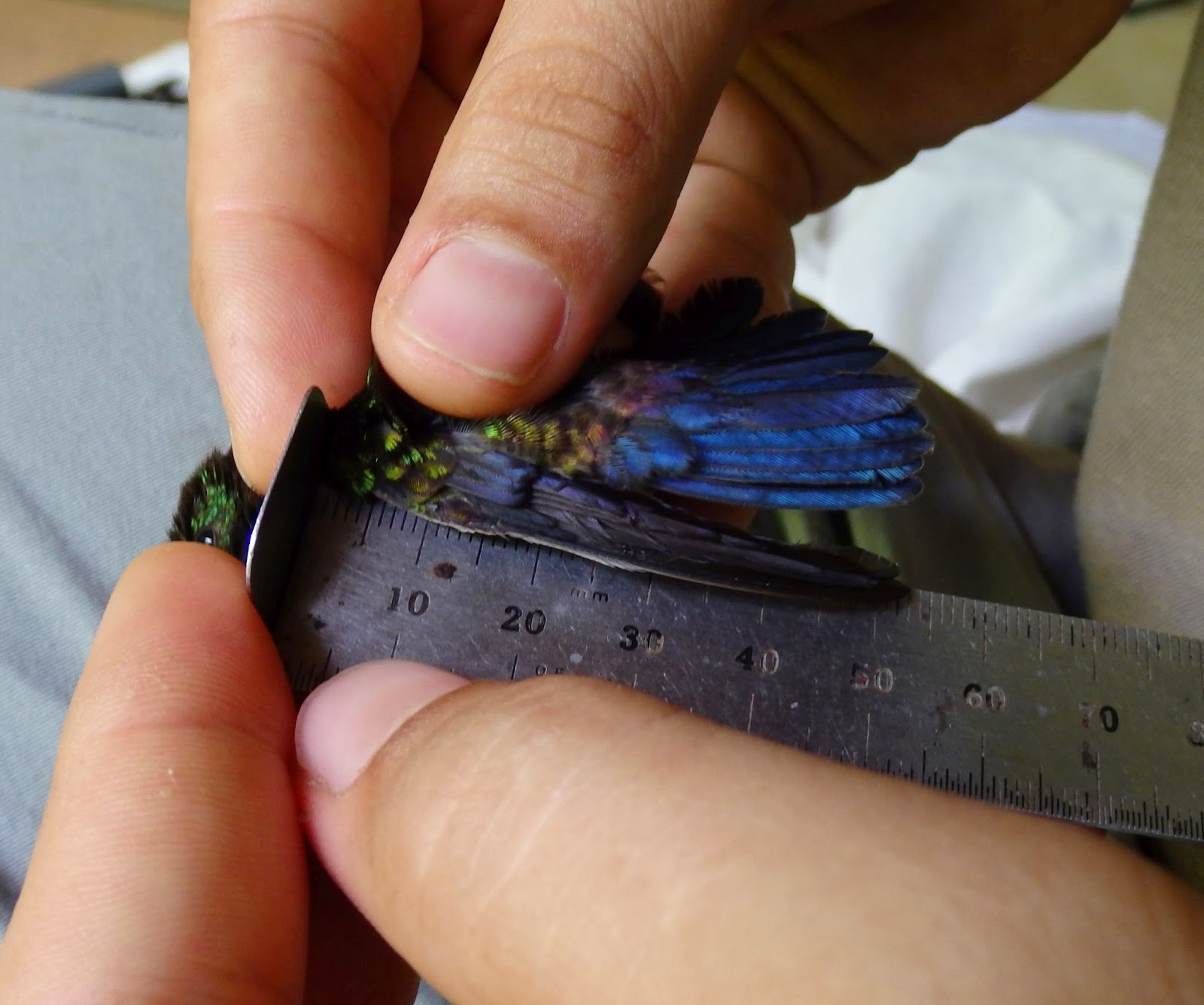 Agustin doing the biometrics, and below with a House Wren, a wren species found in many different sub-species across North and South America. 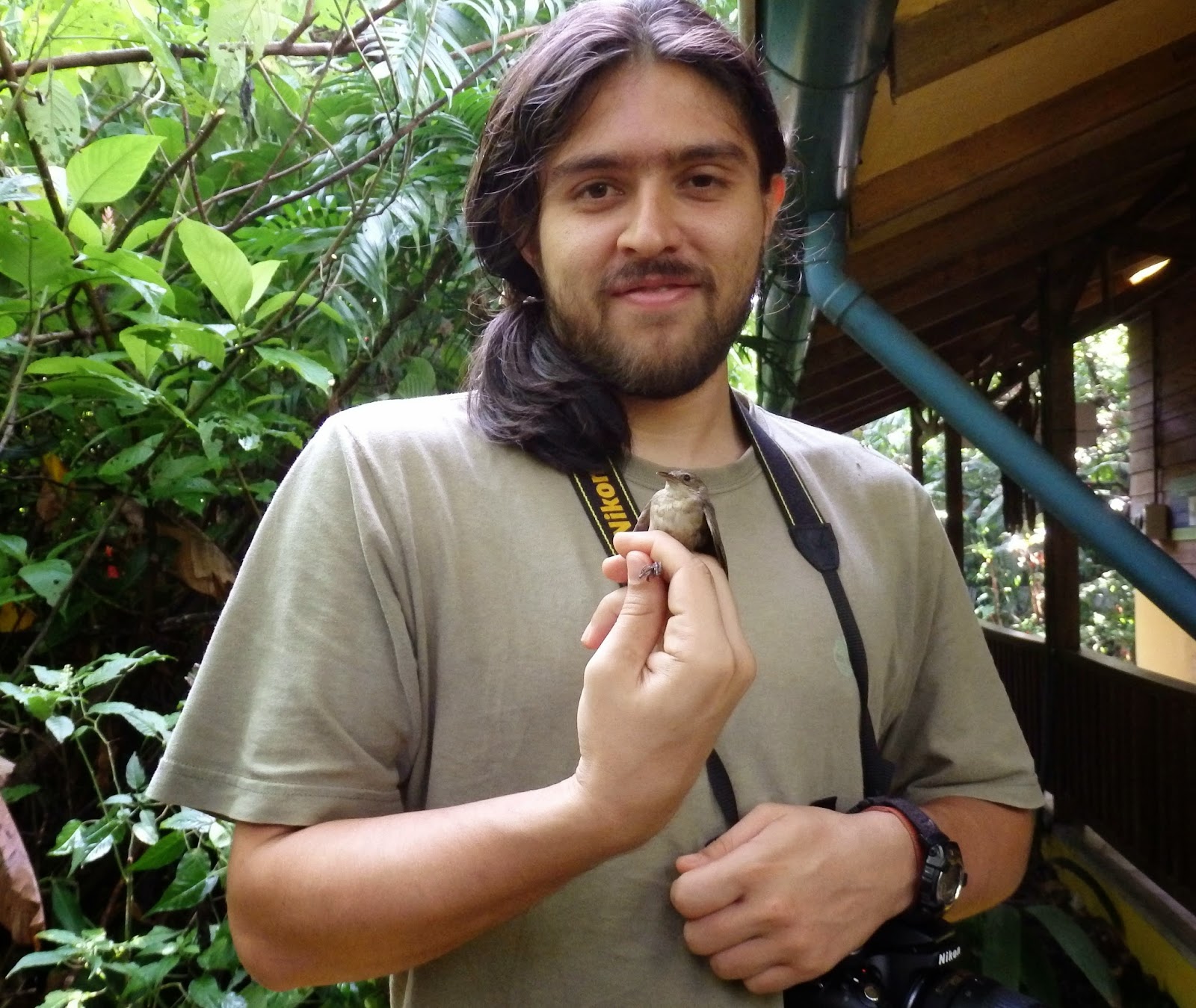 Agustin is a local Costa Rican and we are banding together across all our sites in the coming weeks.

A final warbler from our first week's banding in Tortuguero, our Caribbean coastal base. We will return to Tortuguero in about 2 weeks after a spell at our Highland sites. 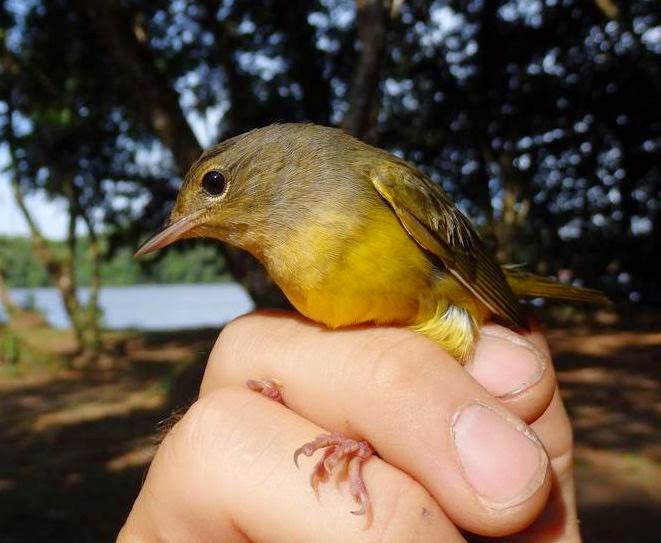 This a juvenile Mourning Warbler, a species not easy to see though apparently a common Fall migrant, we only caught two last Fall, so a pleasing start.!

Posted by Richard Dobbins at 05:09 No comments:

Neither Scarlet nor Common

This splendidly chubby juvenile Rosefinch turned up in our nets on the Teifi Marshes reserve this morning, much to the surprise and delight of all present. With a fat score of 6 (that's fat), and having gorged itself on blackberries, it seemed ready to carry on South without much delay. 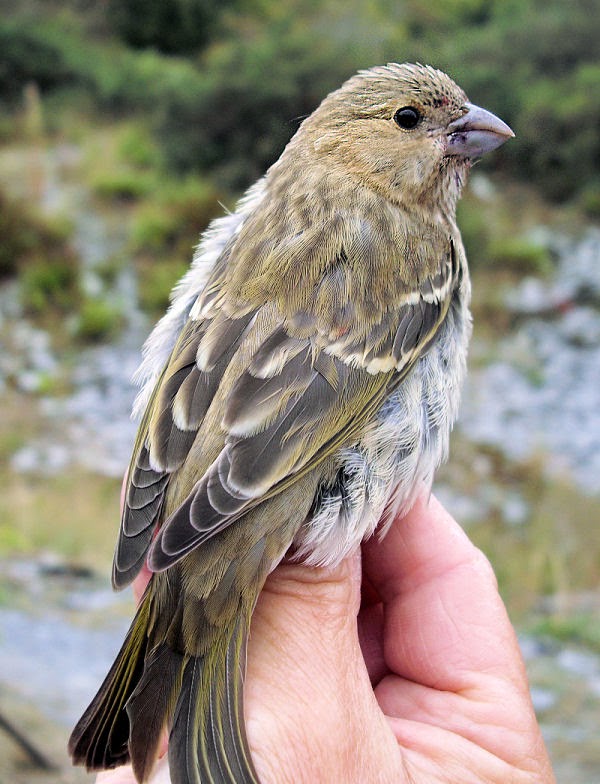 A busy morning also produced good numbers of Blackcaps and Chiffchaffs, another new Kingfisher, two lingering juvenile Reed Warblers ringed elsewhere on the reserve several weeks ago and both still in post-juvenile moult, as well as the expected selection of regular residents.
Posted by Chris Jones at 13:59 No comments:

Back from Dream Island

Time now for an update, having spent the last few days catching up on much needed sleep after a week on Skokholm, falling into bed after midnight and rising again at 6am.

Most of the time the weather was unseasonably fine and sunny, with a steady breeze from the South-east, with one day when it switched around from the North and was more blustery with a few showers.

There was a steady flow of migrants, with the day after the northerly producing a large arrival of Chiffchaffs. As well as the mist nets and Heligoland traps, we used spring traps, potter traps and 2-shelf nets, these producing pipits and Wheatear - two of which were fine adult male Greenlands. We tried everything we could think of (including a dead mouse and other even less salubrious lures) to entice one of the calling Water Rails, but predictably perhaps this was to no avail.

Star bird of the week was a Firecrest, with a supporting cast of Redstarts and Spotted Flycatchers. A Teal was caught in a hand-net on North Pond after midnight, after one of many evenings ringing Manx Shearwater juveniles along the track from the Cottage to the Lighthouse.

News from the BTO of the ringing details for this Cetti's Warbler that we caught on the Teifi Marsh last April. 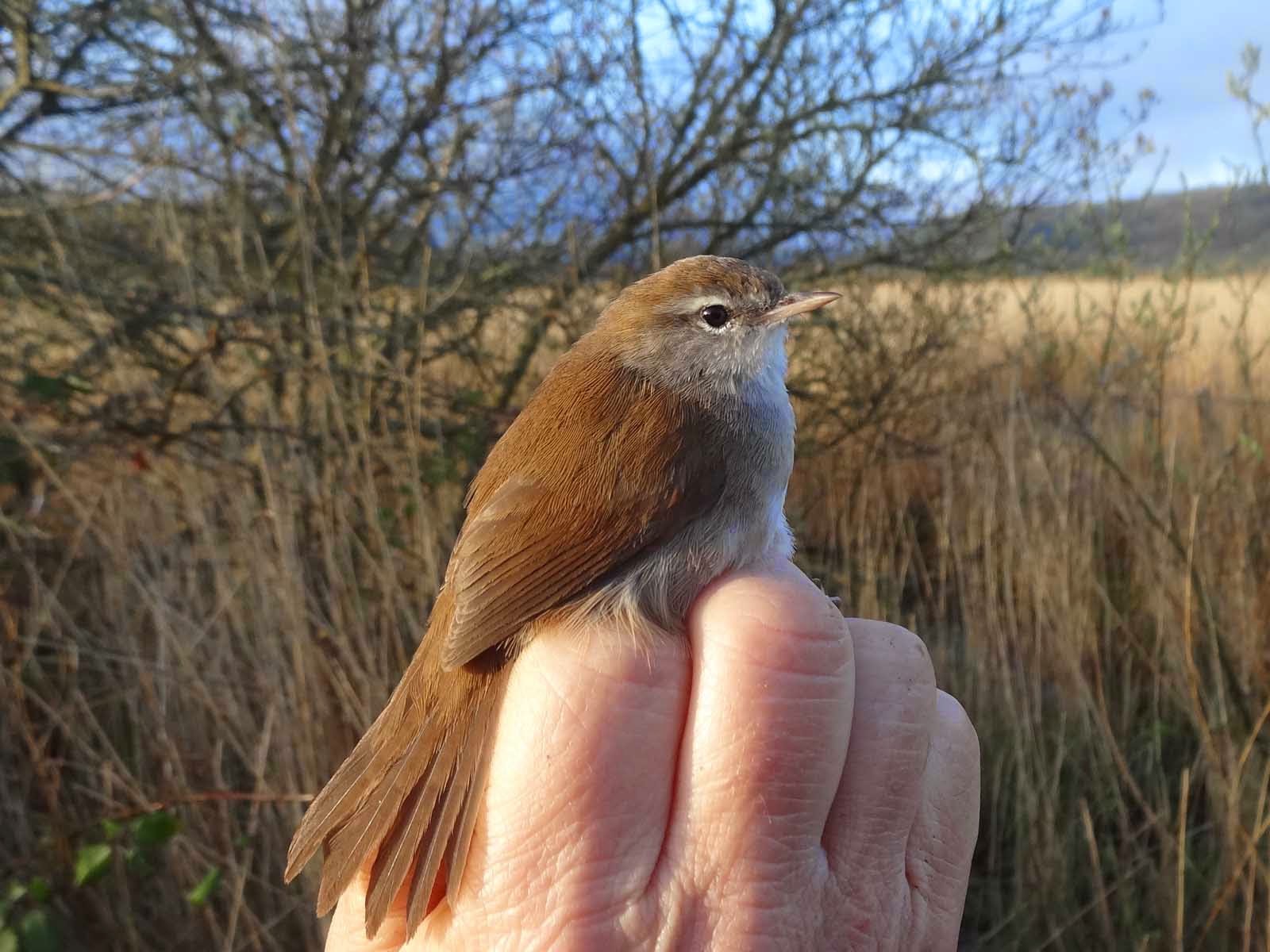 It was ringed as a juvenile at Llangorse Lake near Brecon last August, 2013

This is the second control Cetti's that we have caught on the Teifi - the last was ringed on Farlington Marsh, Portsmouth.
The four new Cetti's ringed on the reserve last week might also not have been bred here but dispersed from other sites.
The BTO Migration Atlas helps us understand the movements of birds like this, a useful addition to any ringers book collection.

From the chapter on Cetti's Warblers - it is thought that they move very little once established as breeders but juveniles may move in their first autumn continuing into April before they settle. Females seem to be more mobile than males. These juvenile dispersive movements are relatively extensive compare with other sedentary species, probably because of the scarce and dispersed nature of the Cetti's Warblers habitat.

This week marks the departure of most of the Group in various directions, to Costa Rica, Skokholm Island and Mallorca.
Here is a last look down the main ride in the Mallard net run, having taken the nets down after the last swallow roost.  No Aquatic Warbler in there this year but a good season for Reed Warblers 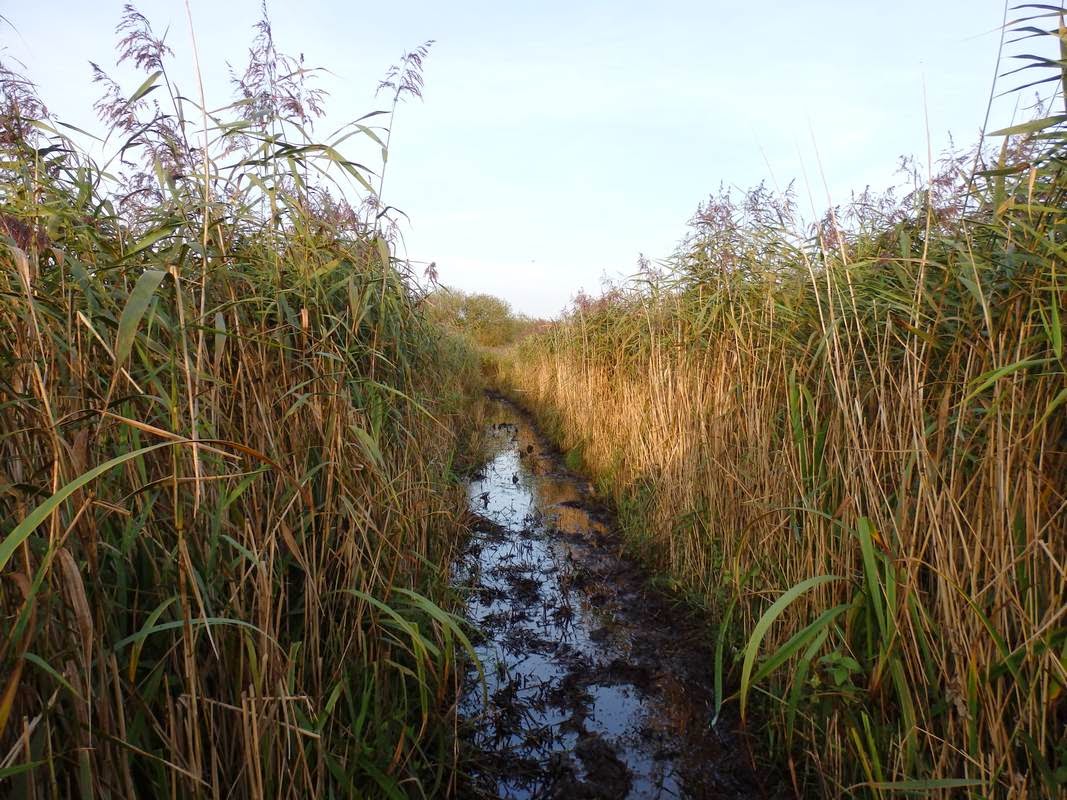 We have been ringing at the CES site each morning and in the evening in the Mallard net run catching Swallows and Wagtails. 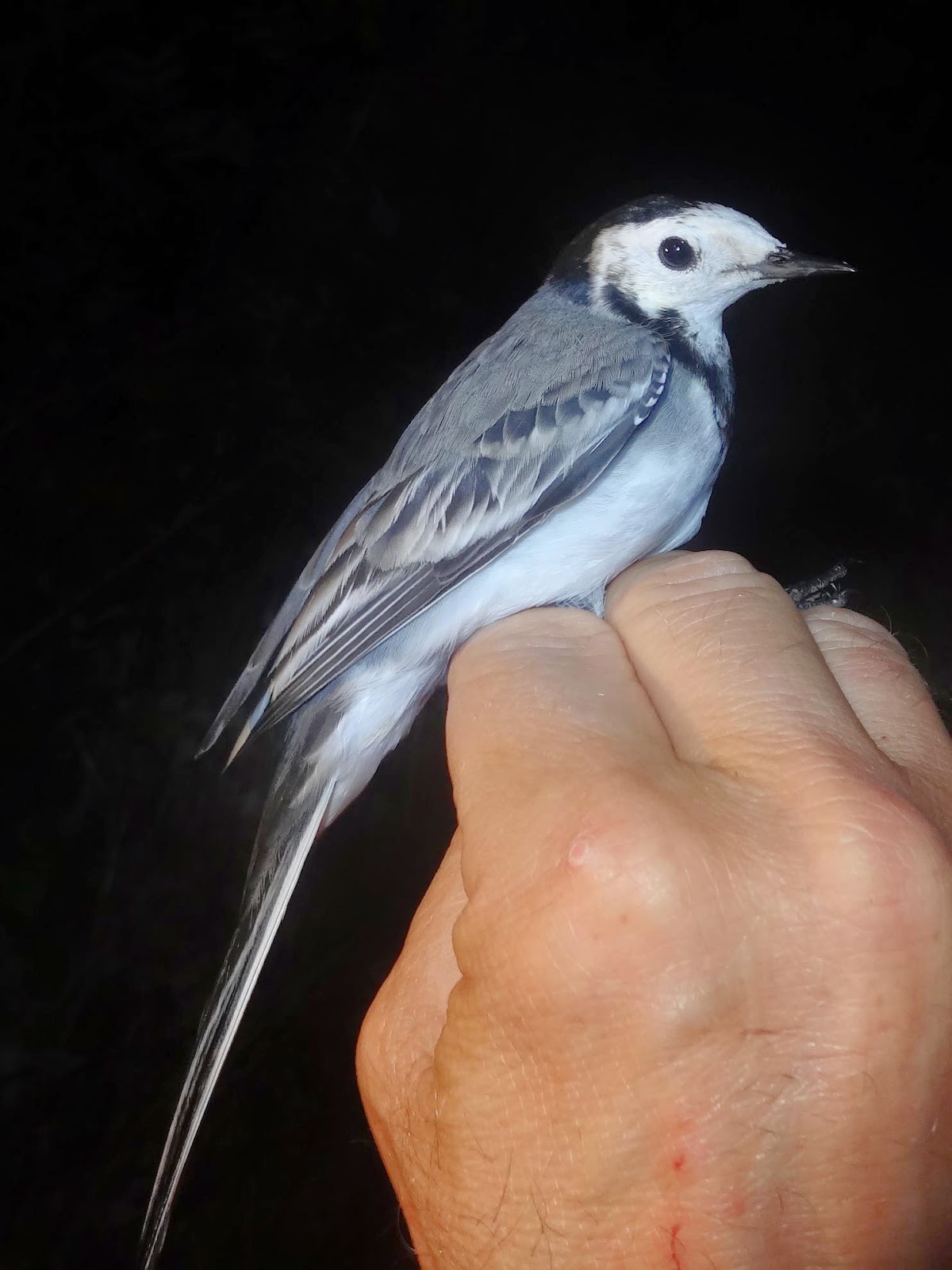 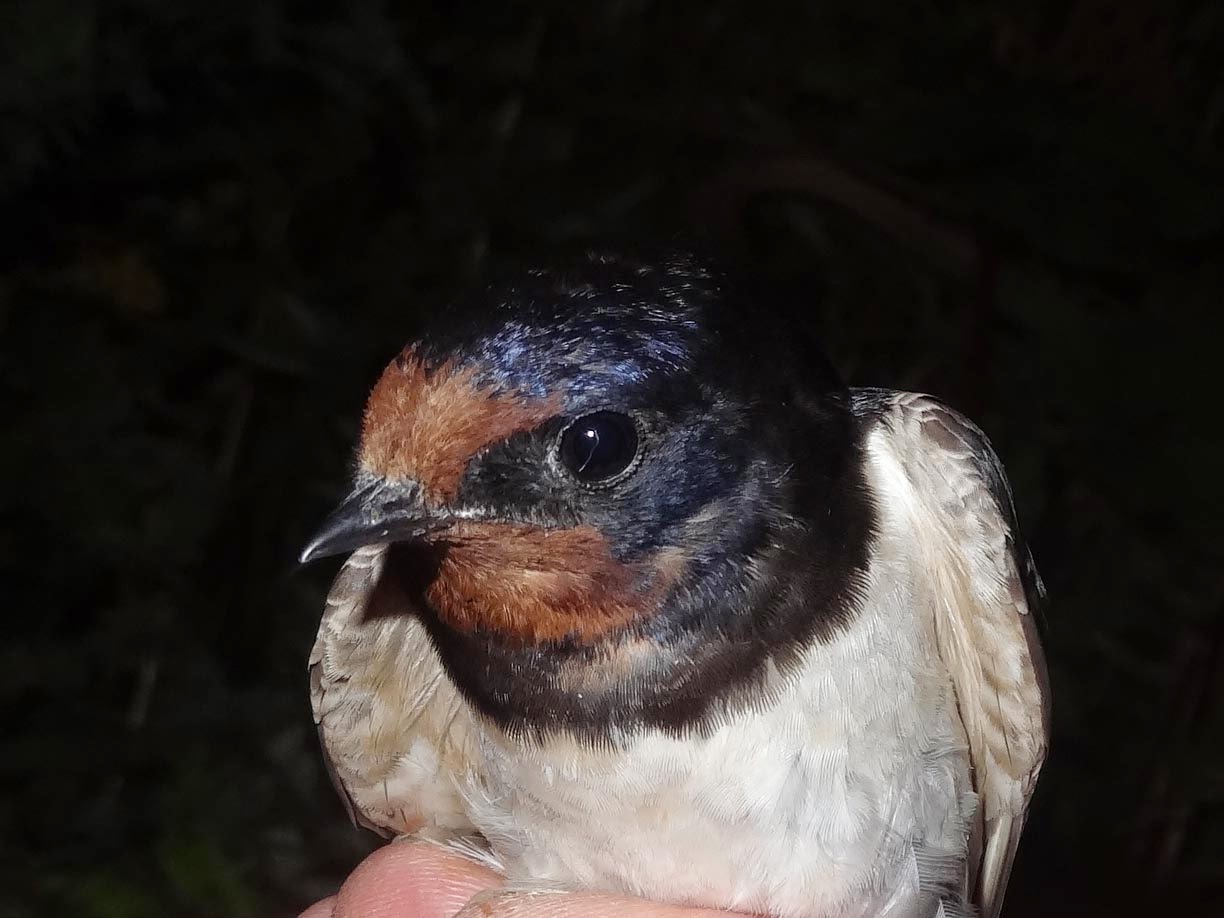 A few Sedge Warblers (picture below) are still trickling through, and Reed Warblers are still being caught in both daily sessions, with four new Reed Warblers on the last evening. 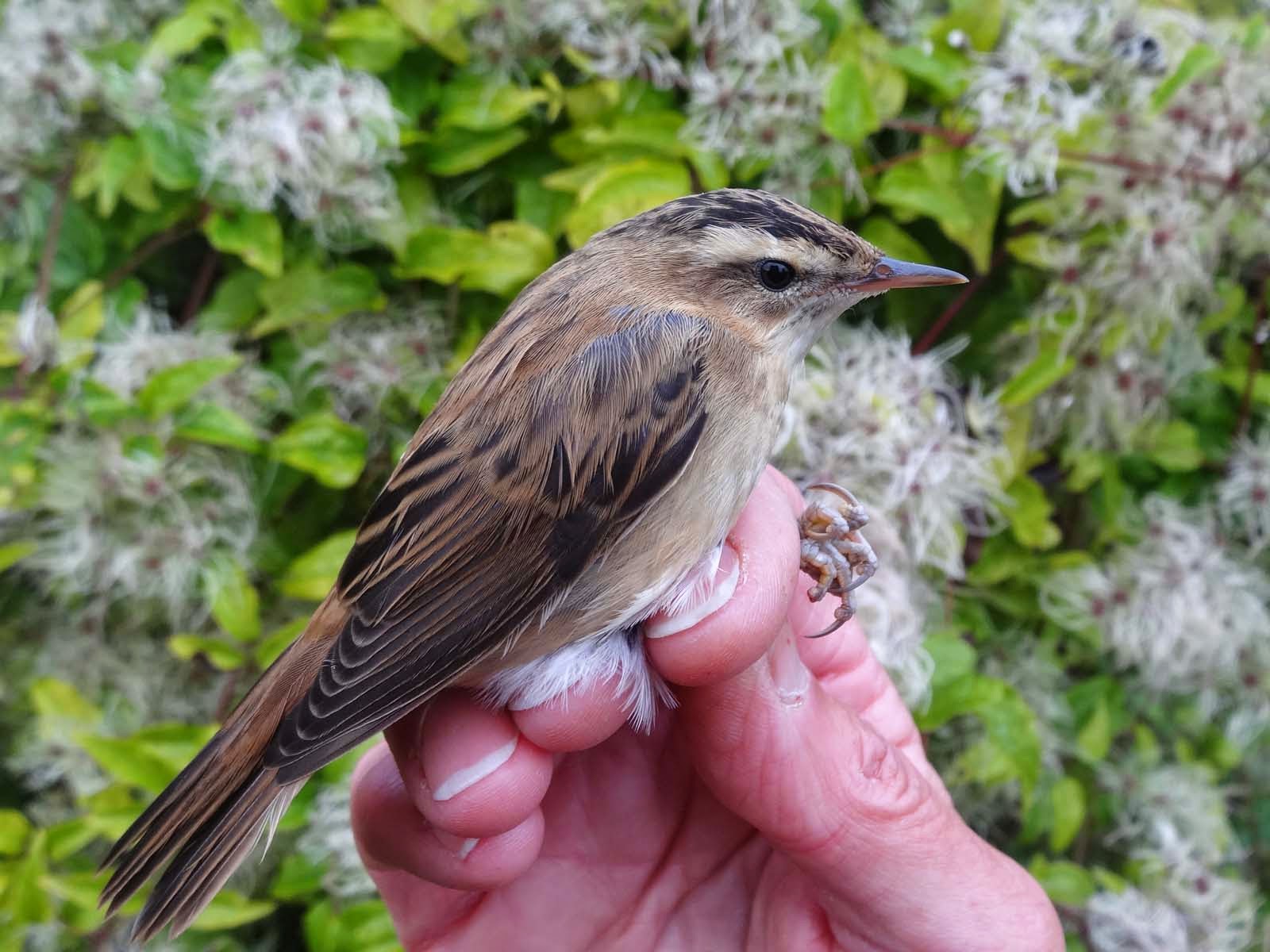 Cetti's have been a pleasant surprise.. 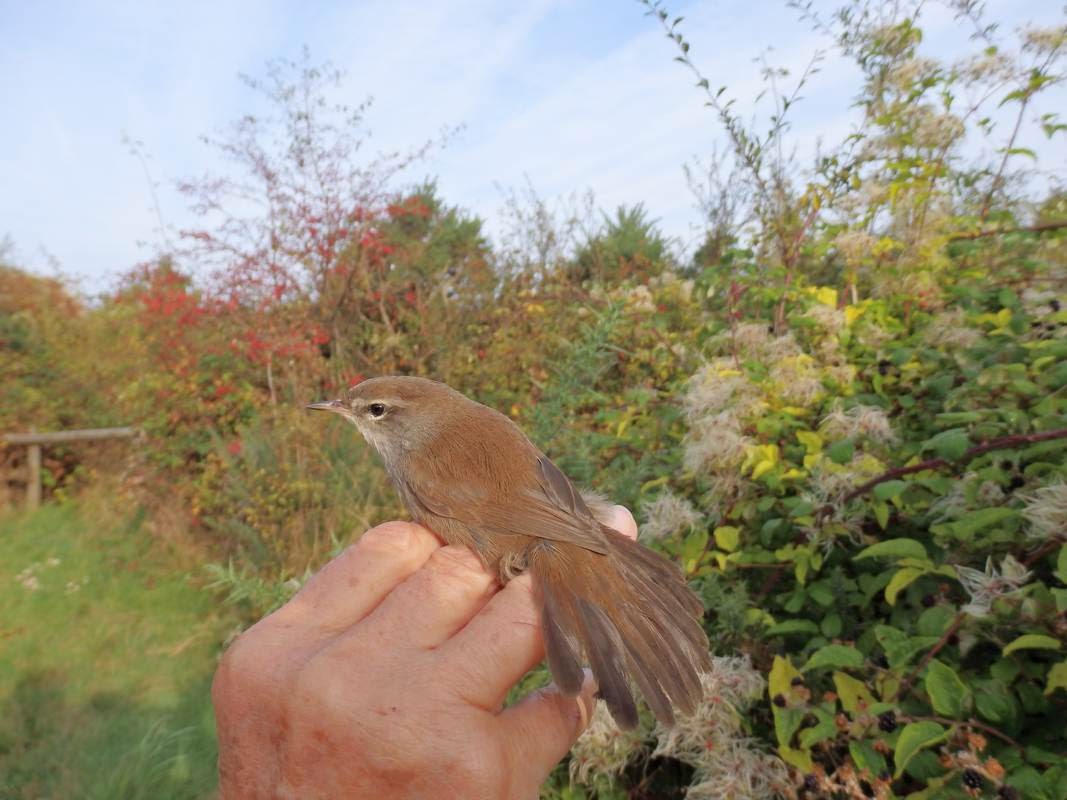 -with four new Cetti's in the last three morning sessions !
Cetti's are breeding residents, but we have had controls at this time of year, and with RSPB Conwy having it's first Cetti's for three years today, these birds may be migrants too...?

Blackcaps and Chiffchaffs have been the most numerous species caught with with double figures of both each day. 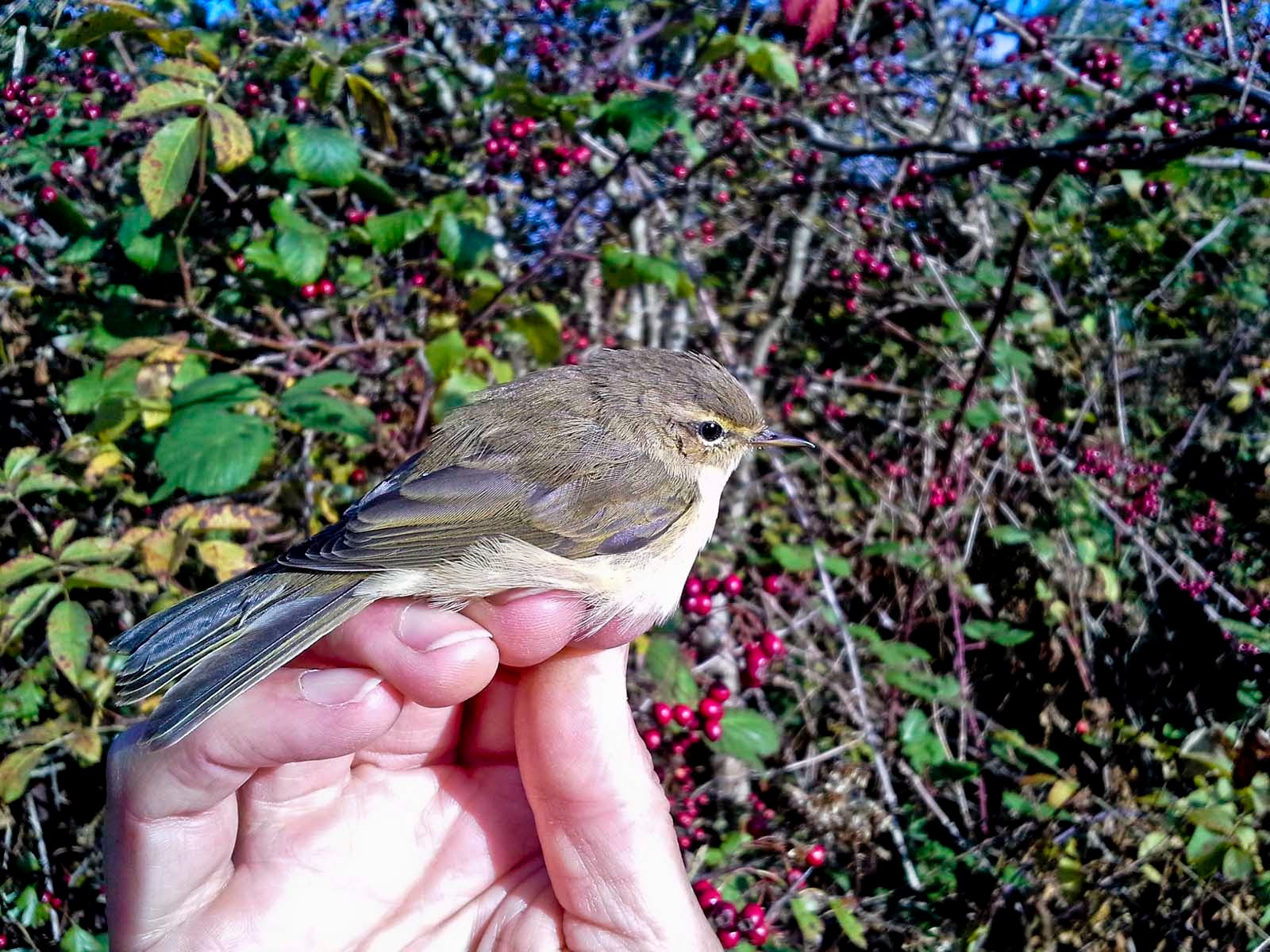 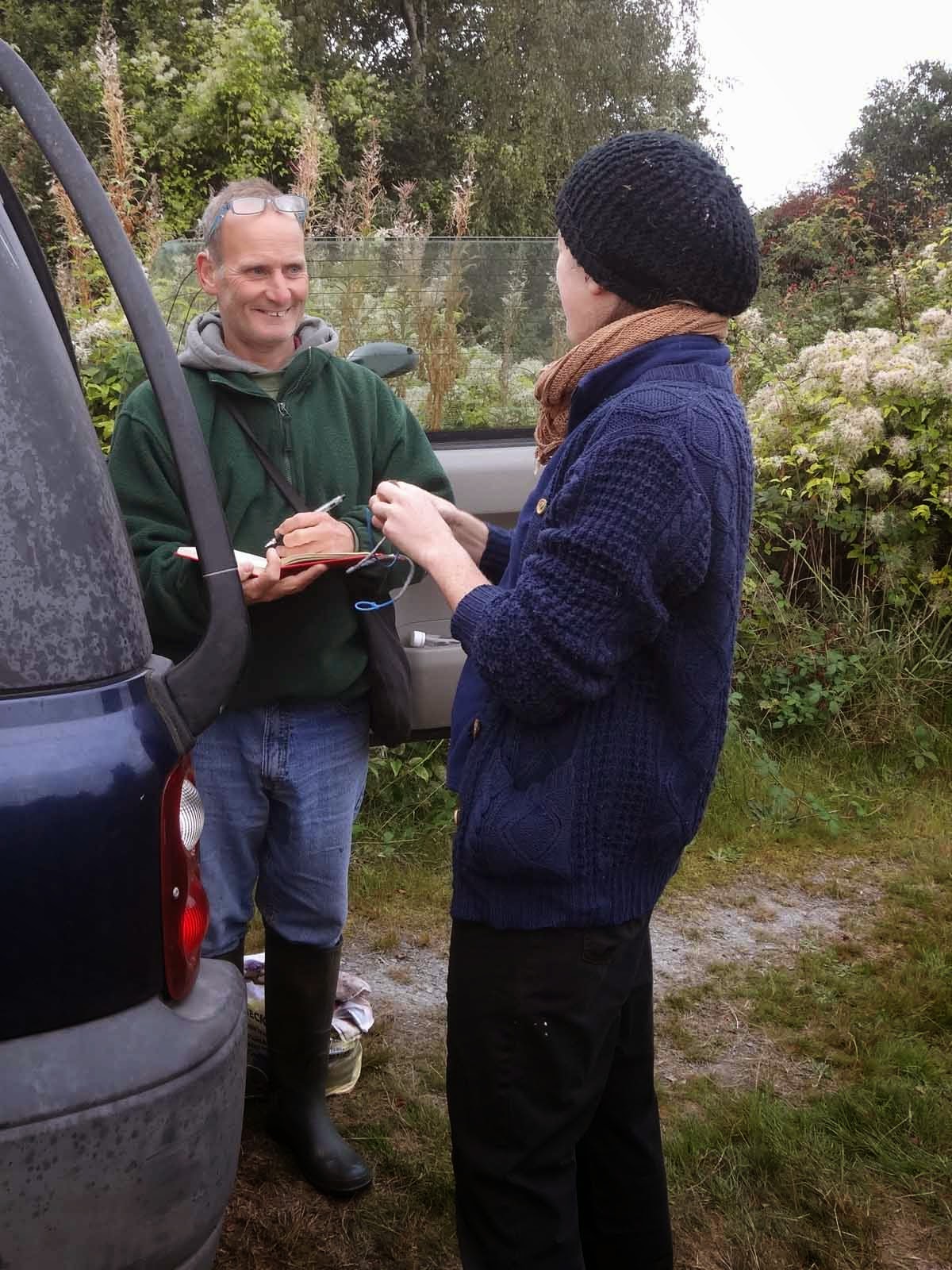 You can't beat this time of year on the reserve with the colour of the Hawthorn berries, Blackberries and the abundant seed heads of Clematis vitalba (Old Man's Beard) looking lovely in the early morning sun.
With Richard currently on the plane to Costa Rica for another 3 months with Costa Rica Bird Observatory there will probably be some exotic birds coming up on the posts in the coming months.We will be trying hard not to be too envious as we think of him doing the 2 hourly migration counts on the beach at Tortuguero 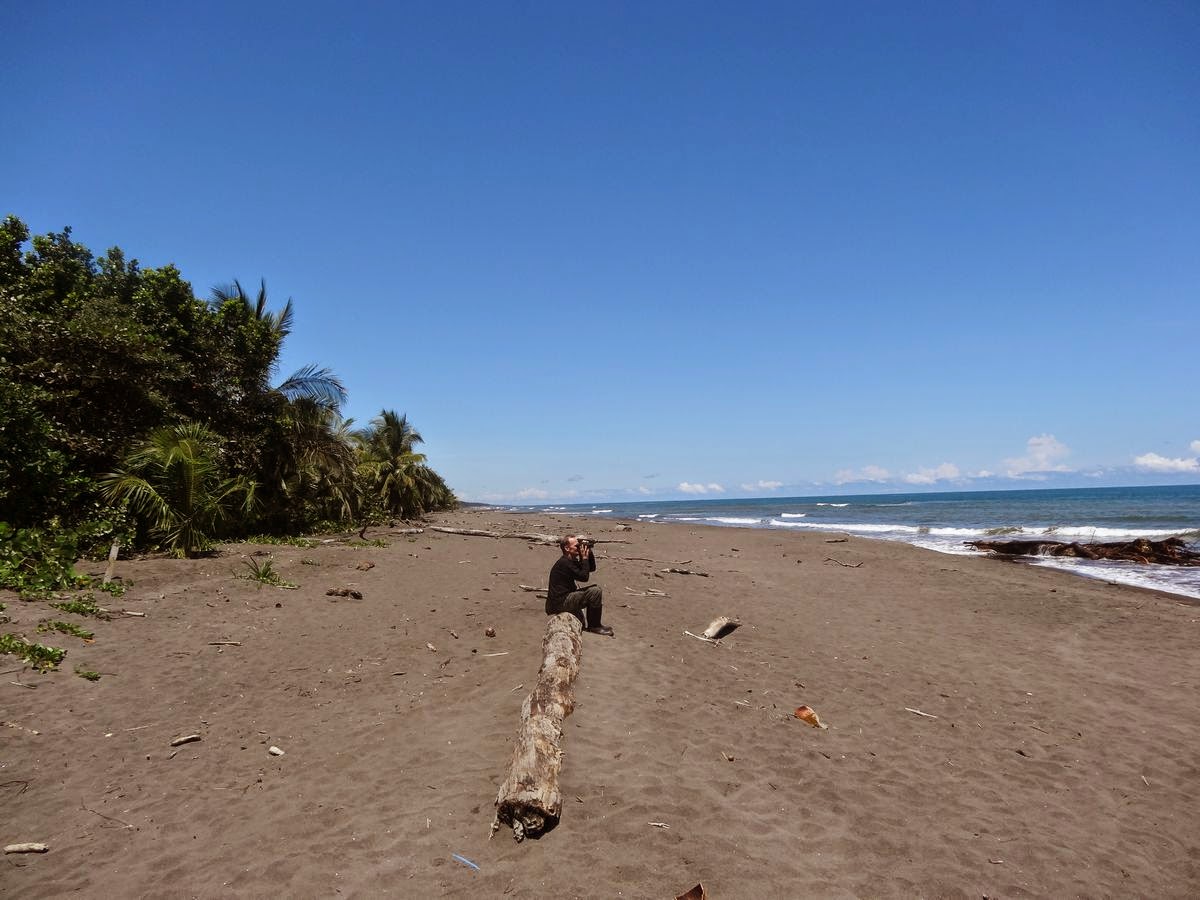 and where the migrants are rather more colourful, like this Summer Tanager 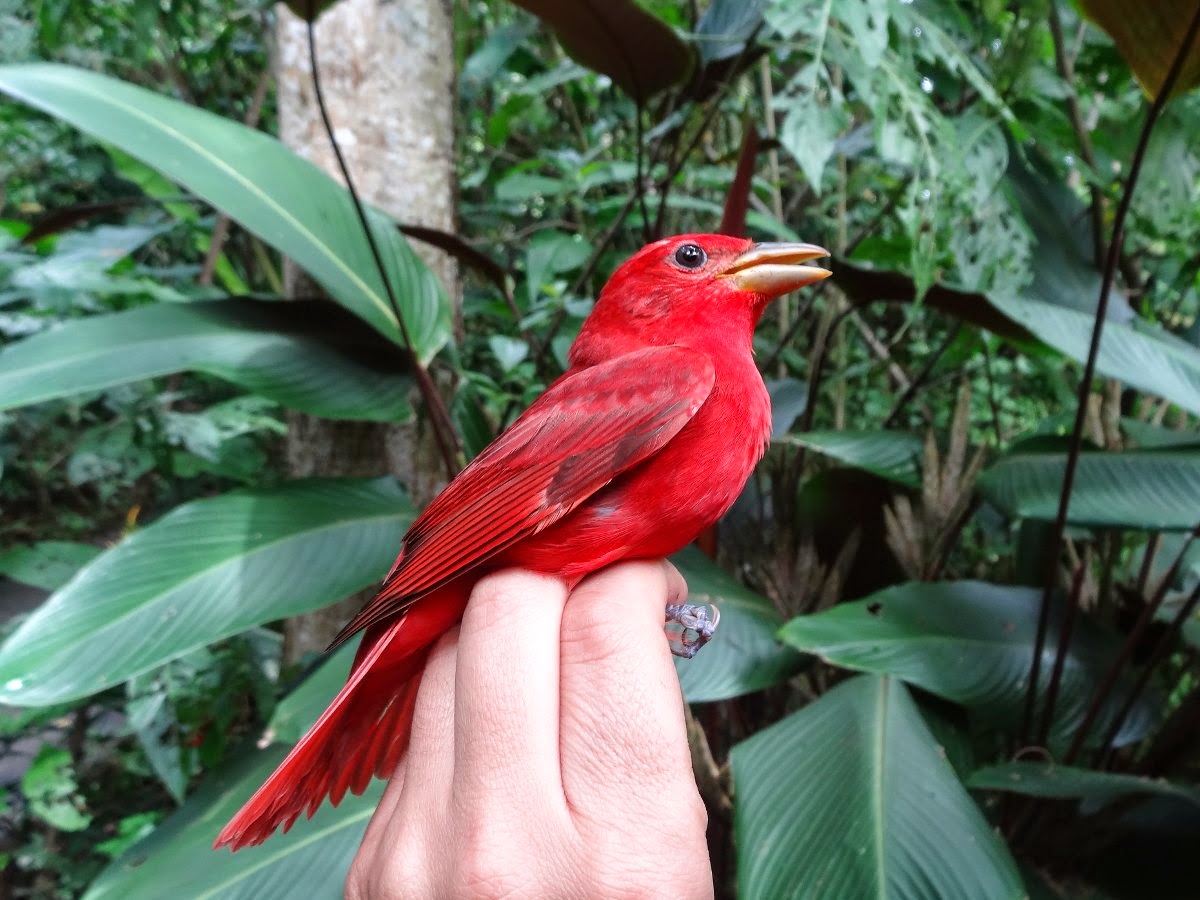 Posted by Richard Dobbins at 08:10 No comments:

Birdtrack while waiting for Pipits

With the reed bed emptying as our summer visitors leave we turn our attention to other habitats at this time of year.
Today we covered two coastal sites for Pipits.
18 Meadow Pipits were ringed at Mwnt 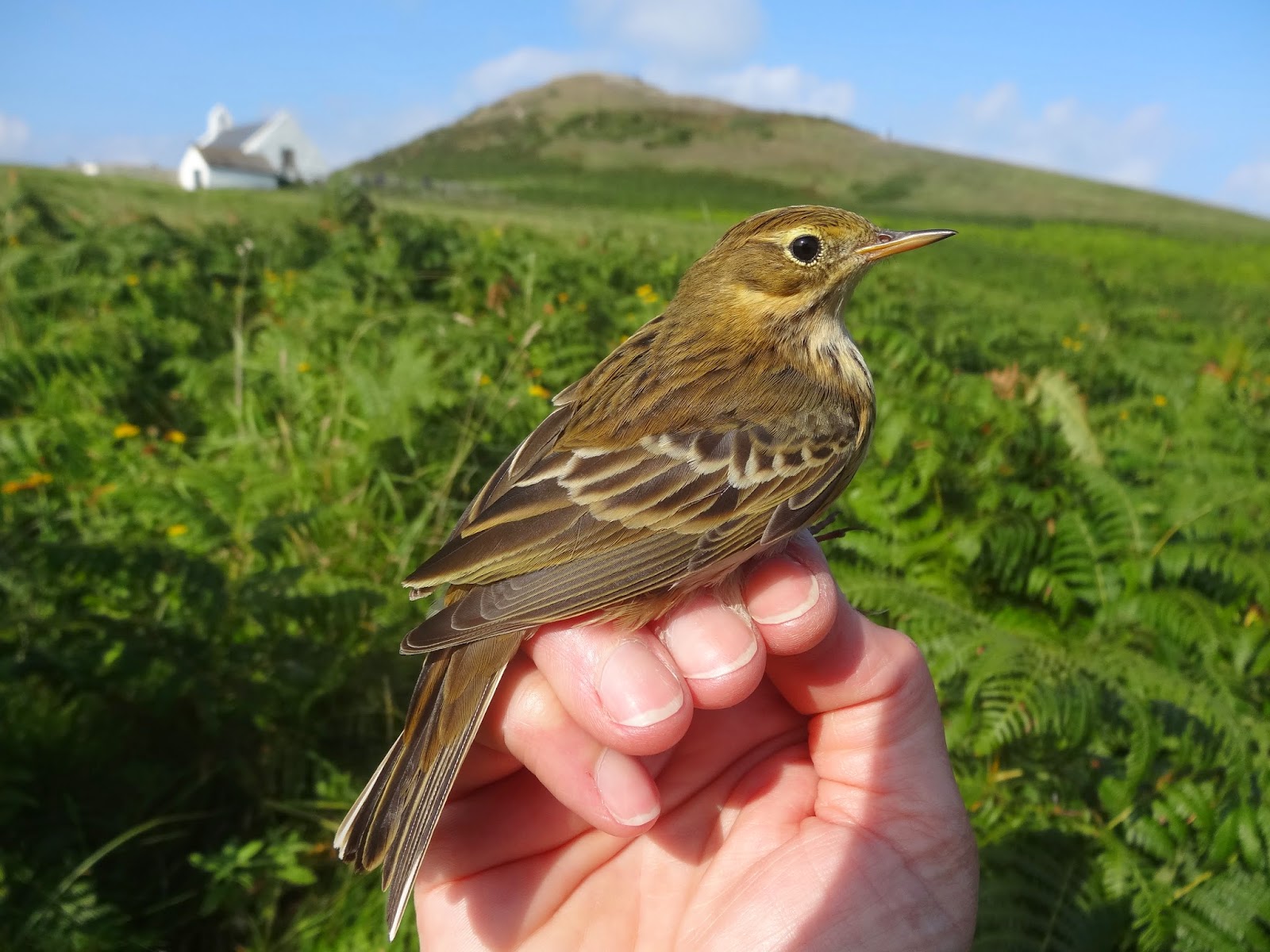 As always, a great site to record birds present for BTO Birdtrack as well as ringing especially on a warm, sunny morning. 3 migrant Wheatear were recorded... 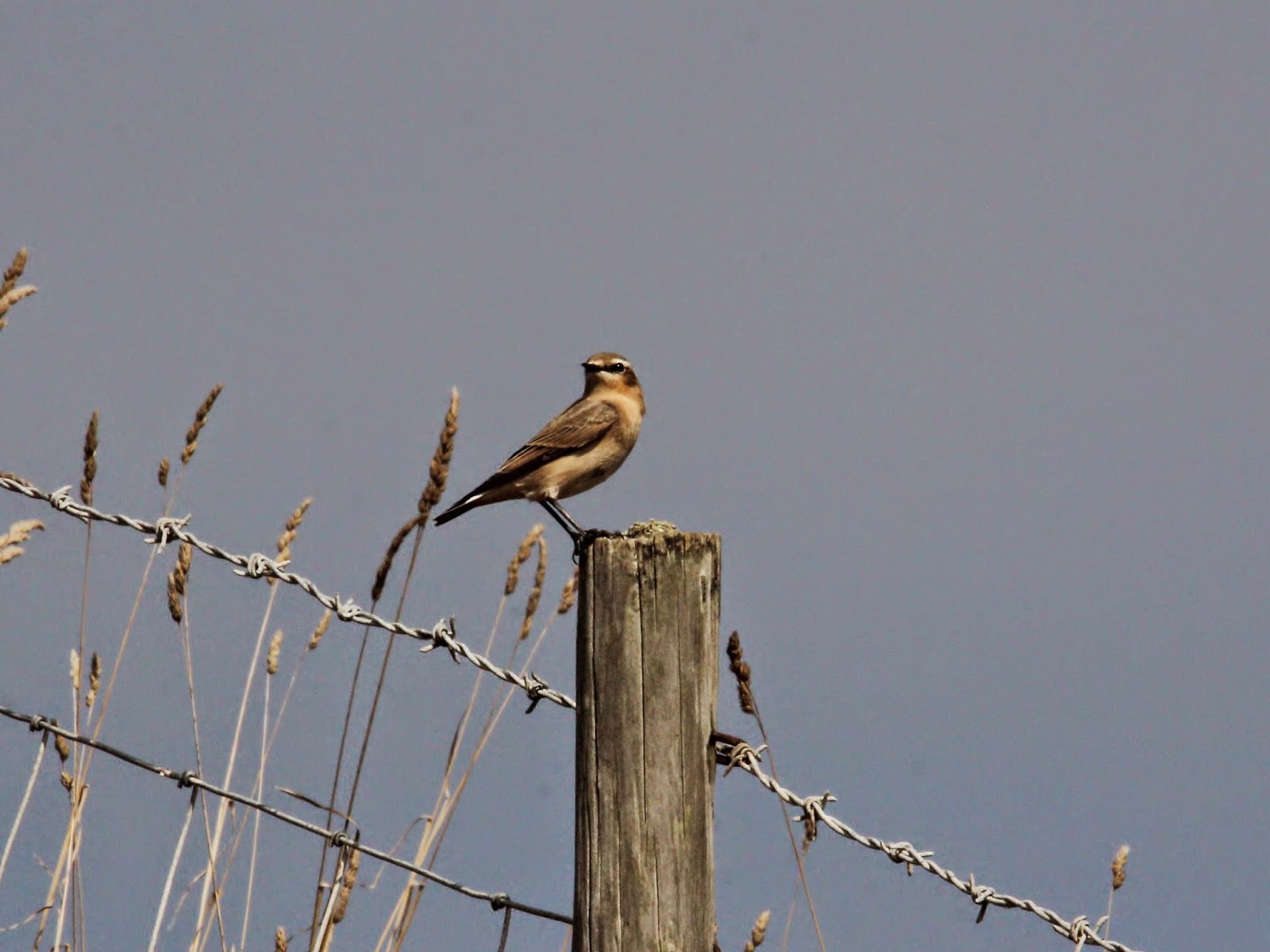 Meanwhile at Patch, on the Teifi Estuary, the day started chilly and foggy. The target species were Rock Pipits. In the last week we had seen a couple with features suggestive of the Scandinavian race, littoralis.
Only three Rock Pipits were seen and two were caught and ringed. 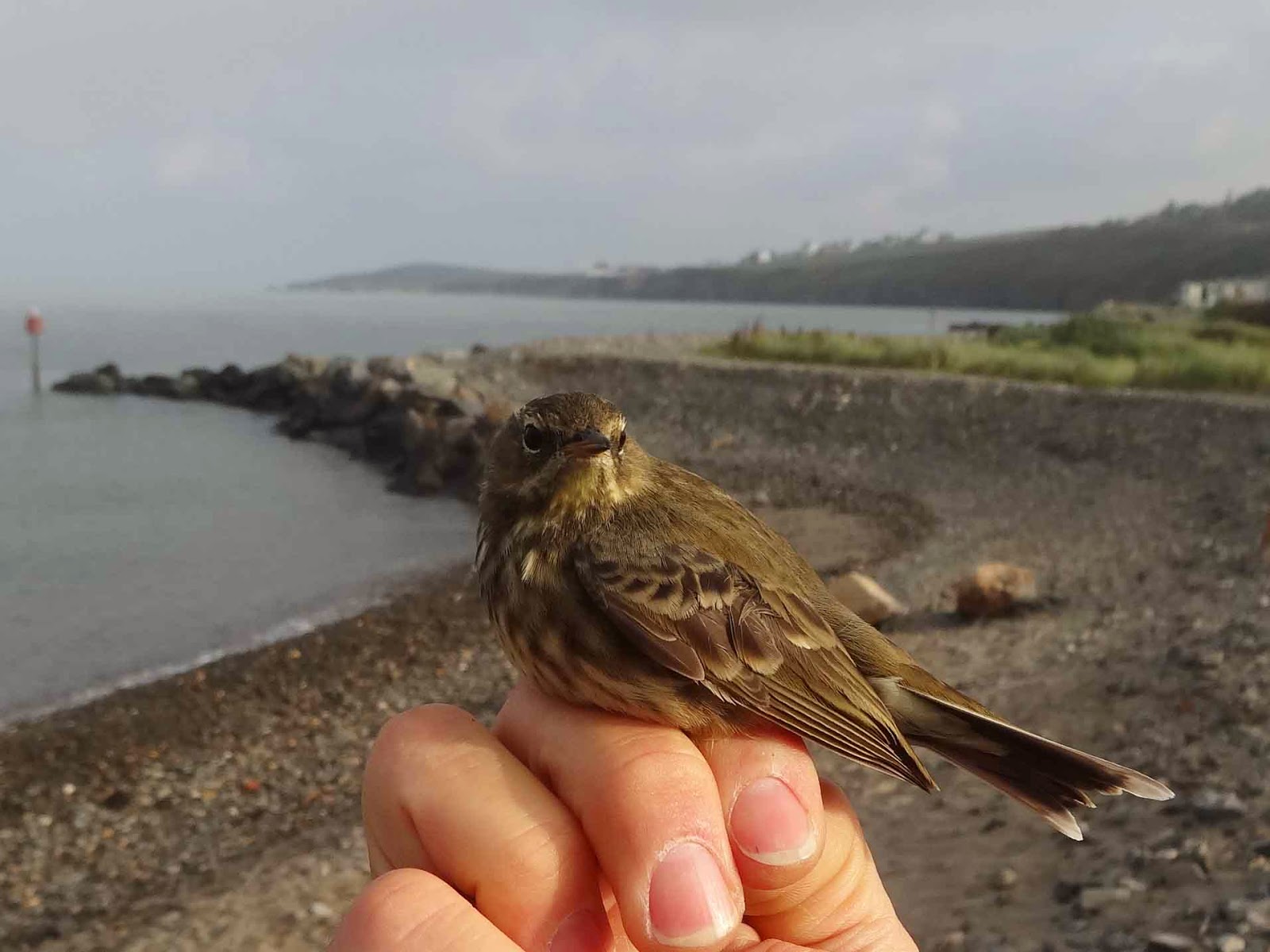 On a closer look, this bird did have white tail tips which are one of the features of littoralis 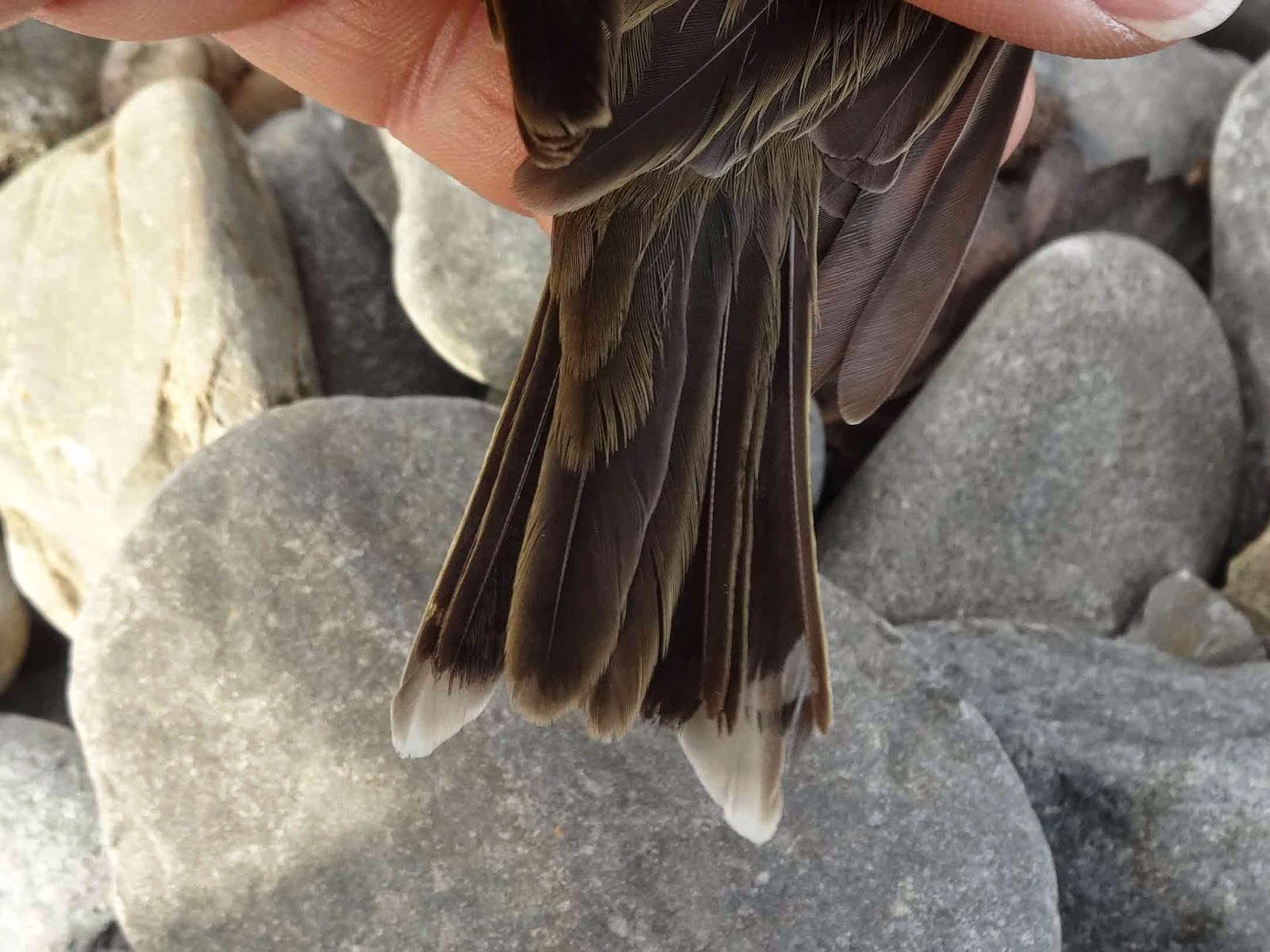 but did not have any of the other features of a strong supercilium and generally paler appearance with clearer breast-streaking. It did have yellow at the base of the bill but then so did the bird that had dusky tail tips typical of our resident petrosus .
This is also a useful site to record birds in the estuary while waiting for birds to go into the traps. Fly overs included 7 Bar-tailed Godwit, several small flocks of migrating Woodpigeon and a flock of Collared Doves. The high tide roost of waders didn't include any rarities - just Dunlin and Ringed Plover.
Back to the Teifi Marsh tomorrow....
Posted by Wendy James at 21:39 No comments:

Local breeders we suspected.... but controlled in the North 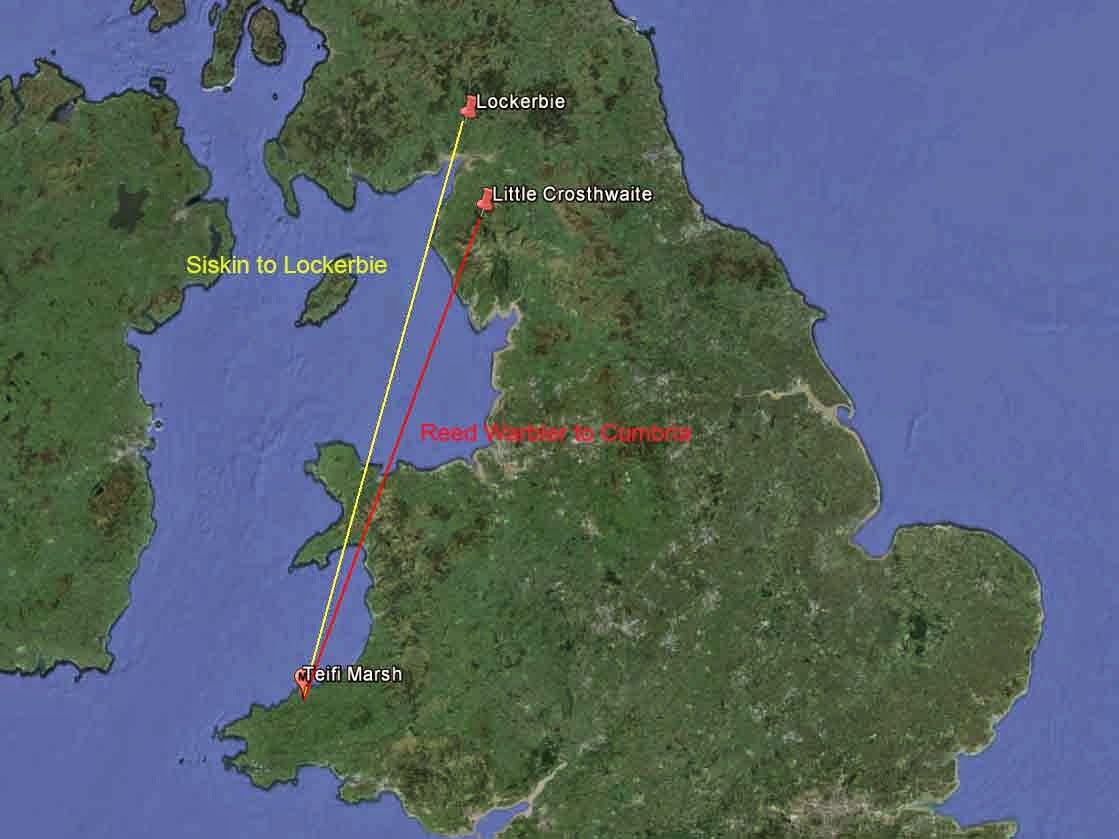 Previous interchange of a bird with Torwood Lodge, Lockerbie - a Siskin ringed there on 1st March 2012 was controlled in Wendy's garden on 26th March the following year. 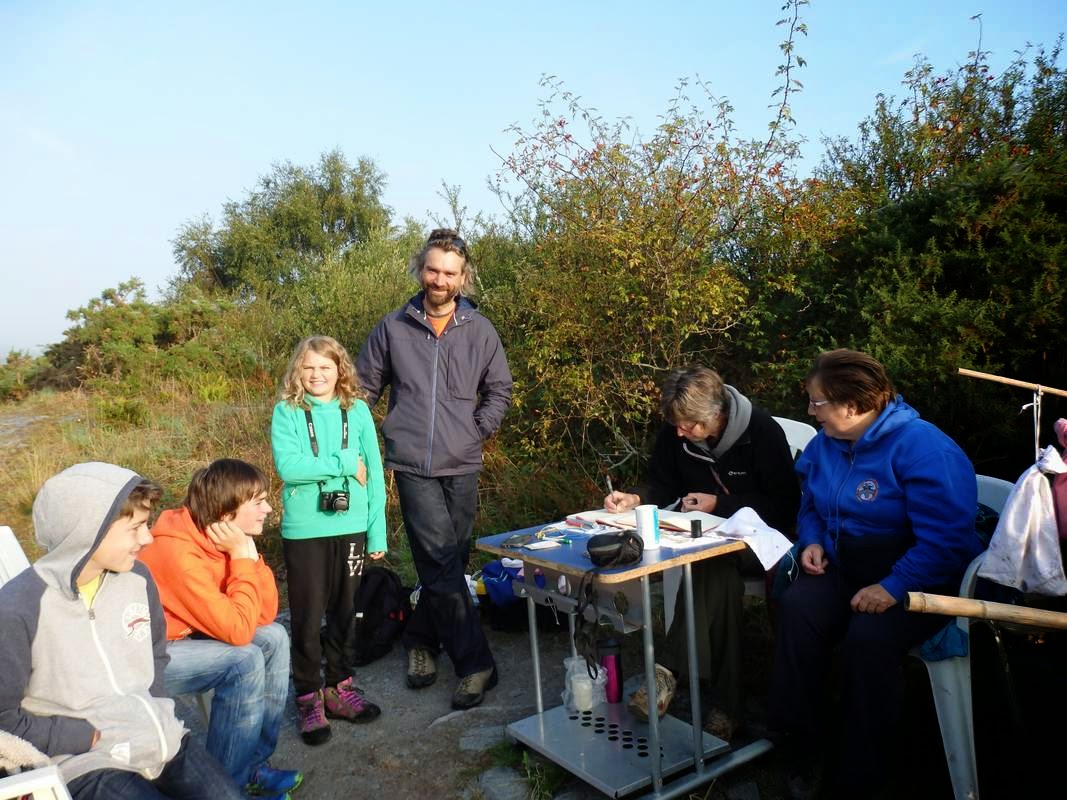 Tony with Maddie, Leo, and Aiden,
Maddie releasing another new juvenile Kingfisher for the year. 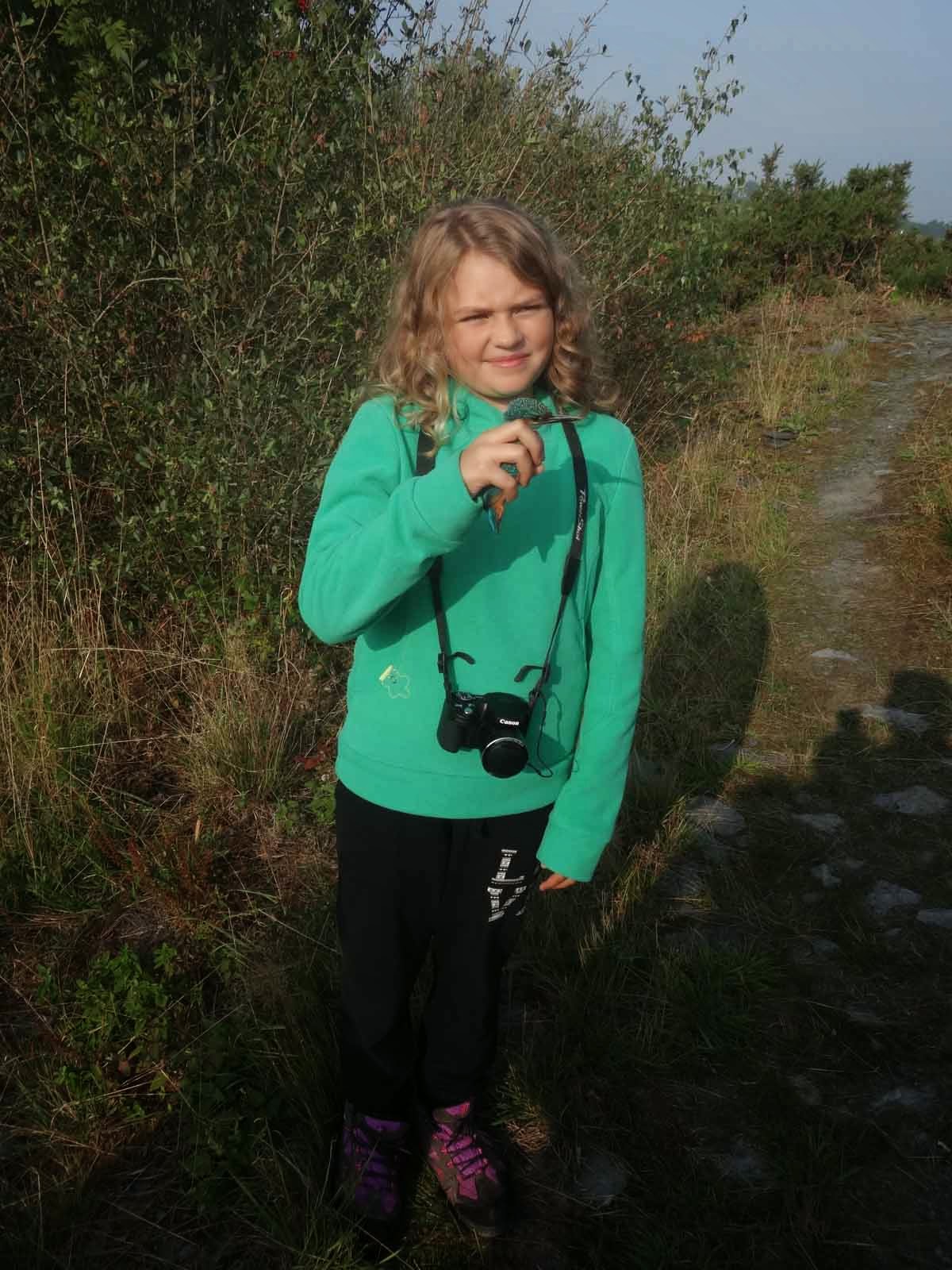 Other ringing highlights on part of the CES site today... 18 Chiffchaff and 17 Blackcap part of the 46 new birds this morning. 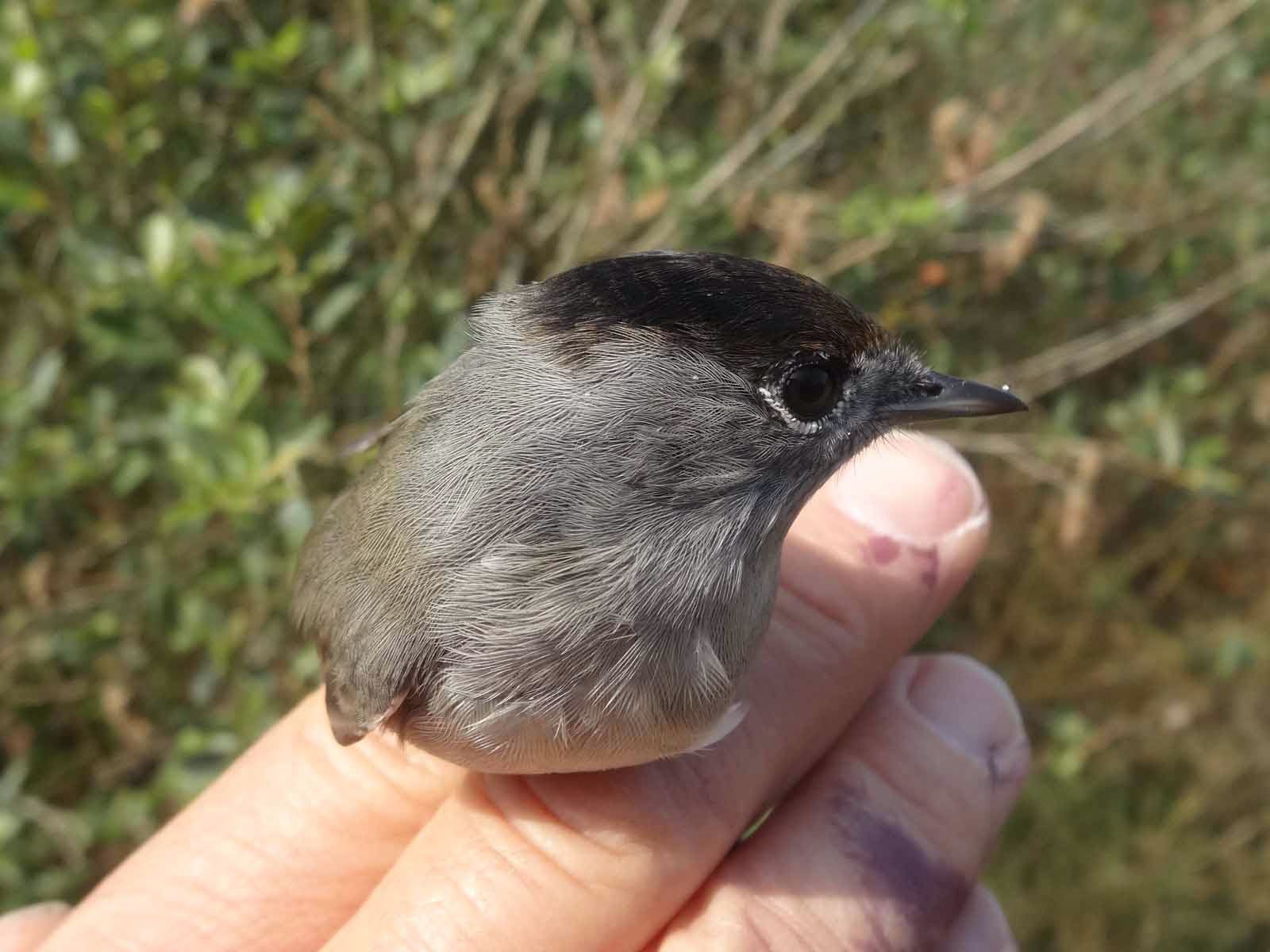 Chris was ringing with Ryan on the Pentood side of the marsh too, totals to come -
though Chris did describe the day as....Titty !! 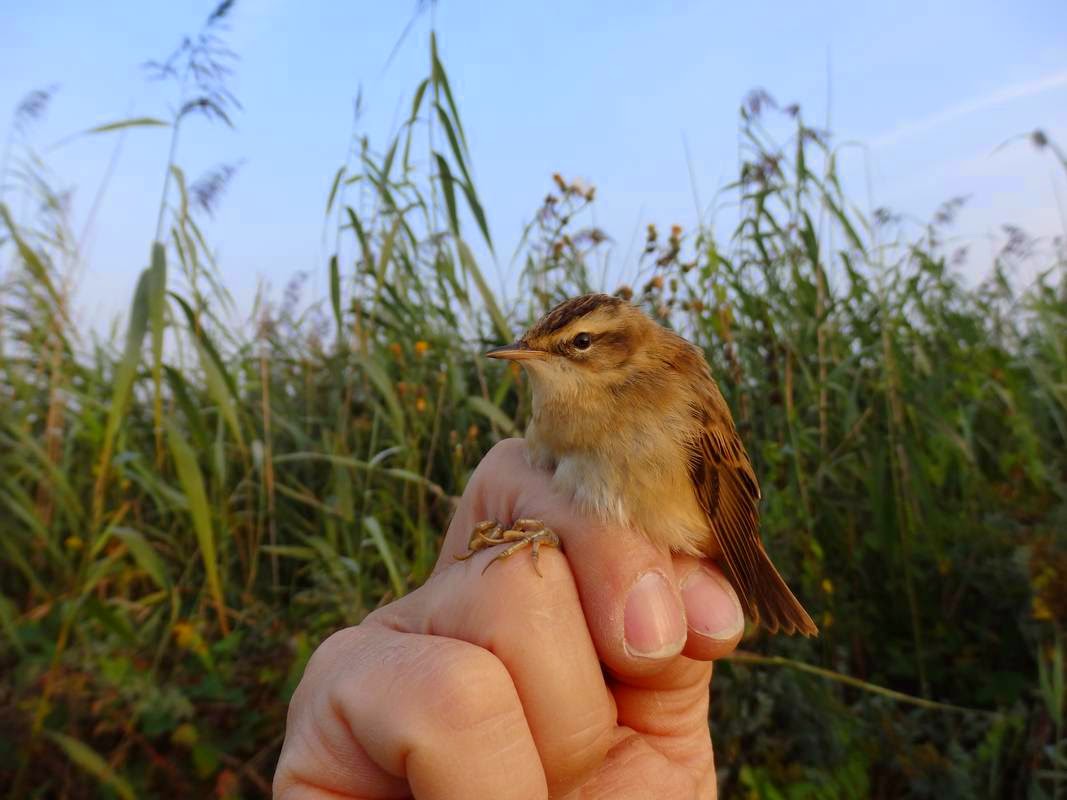 Yesterday an early visit to the Mallard nets included catching a couple of heavy Sedge Warblers, ..16.7g and 17.1g. The second bird was ringed by Alastair Wilson on the 24th August, before he returned to the South Atlantic, and weighed 10.6g with a fat score of one. Yesterday at dawn, an increase in weight to 17.1g and of fat score to eight.
.....A fat bird and ready to go far south too...!


Posted by Richard Dobbins at 23:17 No comments:

We catch a variable number of White Wagtails each Spring on their way north.
April 10th 2014 was a typical early Spring evening ringing on the marsh, with 1 Sand Martin, 3 Swallows 3 Pied Wagtails and ....20 White Wagtails ringed. 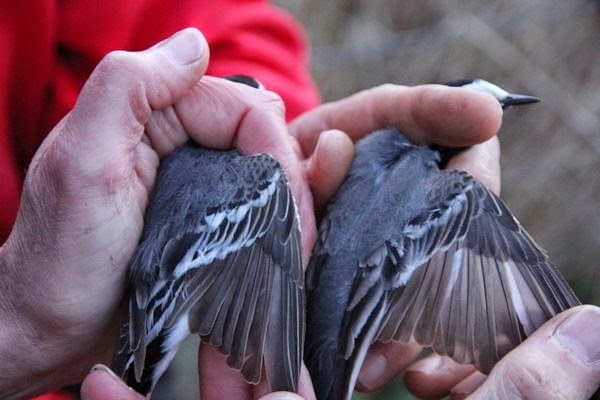 This photo from April 2011 showing Pied and White Wagtails.

We often find it hard to believe that White outnumber Pied significantly, so what good news it was to receive details today of a recovery of one of those White Wagtails. A great reward for our efforts to find out where our west coast White Wagtails are going. D761240 was found at Enni,Vidvikursveit in the north of Iceland 76 days and 1731 km after being ringed. A pity that the recovery is of a bird found dead though ... 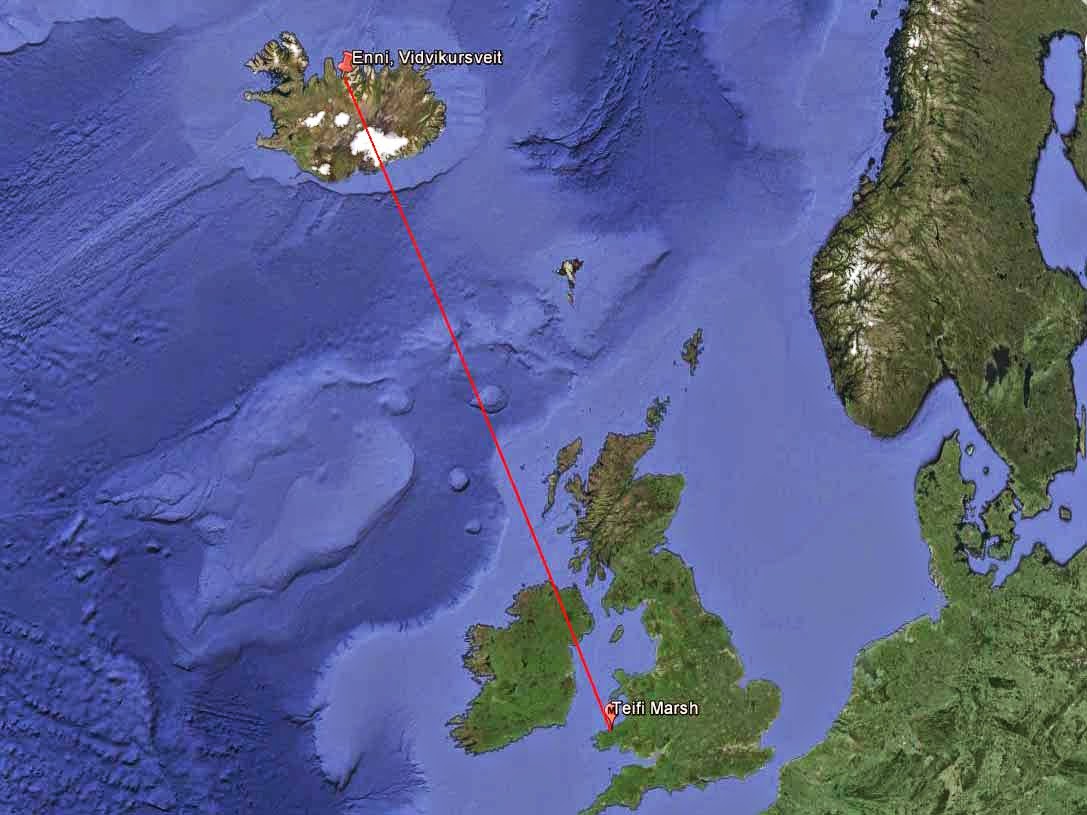 This was a posting we made on 14th April this year...four days after the ringing of  D761240..
"Wagtails poured on to the commercial reed - cut this evening. Over 100 arrived and a sample caught showed 25 / 26 to be White Wagtails. Out of 82 birds caught since 10th April - 79 White and only 3 Pied Wagtails. Early in the month, when the roosts were smaller, only 8 / 23 were White Wagtails."

Details of other recent recoveries in tomorrow's blog..
...though a note on our activities today,
98 new birds ringed on part of the CES site, and 70 of these just two species.
44 Chiffchaff and 26 Blackcaps ....
Posted by Richard Dobbins at 23:22 No comments: