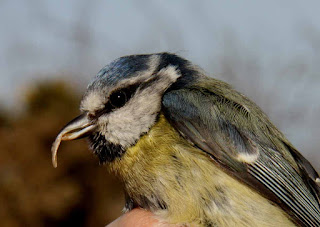 Having read the recent BTO blog about birds with deformities, it was interesting to catch this odd looking Blue Tit. It was a retrap, having been ringed by us in September as a juvenile when it had a completely normal beak. It was the same weight as others caught this morning so must be managing to feed sufficiently well, though the bird had moulted less coverts than expected.
A nice selection of warblers today too, including our first Blackcaps for the year, some Chiffs - one Chiffchaff - CNP216 was ringed as an adult in June 2009. Also nice to ring a new Cetti's Warbler, Cetti's singing from the usual five territories.

In Ffynone wood, a new project for the group this week was to help some local children put up nest boxes that they had made. This was organised by Kate from Growing Heart Workers Co-operative as part of their aim to make it a community woodland. 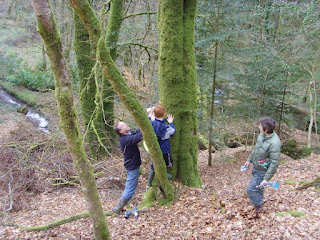 This wood is the site of the first record of breeding Pied Flycatchers in Pembrokeshire. They are seen here every spring but no recent breeding records so hopefully the boxes will be successful. The wood has some good areas for a potential new ringing site.
Posted by Wendy James at 20:48