Having your local ringing site go up in flames while 'locked down' means that you either stop ringing or look elsewhere for a potential project or area of study. A garden CES was out of the question as we are still quite busy restructuring the lower part of our garden. Over the last couple of years it hasn't been unusual to see a flock of up to 60 House Sparrows hanging around the house from July to September waiting for some seed to be put out. Rather casually I had estimated that there were perhaps 15-20 pairs of House Sparrows in the village and had considered this too few for a RAS study. This year during the spell of fine settled weather, I watched the House Sparrows using my nest boxes and was quite surprised at how good the adult birds were at catching insects and how persistent they would be if the initial surprise attack failed; often sitting on a gutter or similar raised perch and then descending to the ground in a direct dive to catch prey. I also watched activity at the nest boxes and observed on several occasions the aggression of a male towards his mate if she returned to the nest with food but didn't enter the box immediately. On the days when the weather was not so good, the birds would focus more on my feeding areas. Having made my early observations, I removed one aerial feeder, introduced a second table to where the birds seemed to prefer to congregate, carried out a little pruning and set positions for several nets. It is now mid August and the season appears to have been a productive one with third brood juveniles on the wing the first of which are starting to moult. One of my net positions was a waste of time for House Sparrows but caught lots of Dunnocks. Another has produced an ear shattering 24 different Great Spotted Woodpeckers but I have stuck with it because it has also been the most productive net for House Sparrows.

From the 1st of April until the 17th of August, at least 355 different House Sparrows have been in and out of my nets and boxes. 40 of these have been adult males and 32 adult females. As I fed the birds this morning, I could see several adults along with many first year birds that have avoided capture during the last four and a half months. So, my initial estimate of the number of pairs was obviously far too casual. I know for certain that not all of the male birds were paired during the window of the first two broods with some males not attracting females to their nests. I also know that at least one of these unpaired males mated with a female on several occasions; he remined at his 'post' while she went elsewhere but was not traced.

If I assume that a more realistic number of pairs is 40; 2 chicks per nesting attempt would give rise to 240 young and 3 chicks per attempt 360 young. I think that it would be safe to assume that the village/surrounding area is probably supporting closer to 40-50 pairs as some birds are known to have failed on third broods.

I am currently on the look out for signs of these 355 birds. I know mortality rates are high for young; several cats will have removed some and I have seen at least two Sparrowhawks recently. I have the notional 60 House Sparrows coming in for food as in previous years and so perhaps there are 6 other flocks of similar size distributed amongst the 29 houses in the village but I haven't come across this number of birds while walking the dog. I saw one small flock on a 'fly out' from the village only for them to turn around at a distance of some 150m. I am suspecting that I may need to go and visit a couple of isolated properties away from the village to find a few more answers. 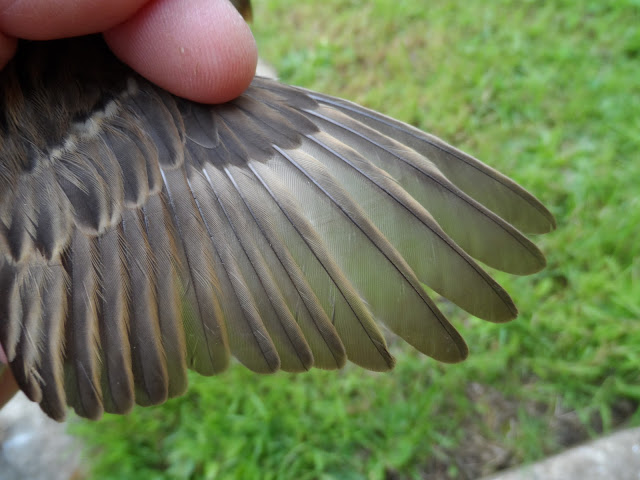 No good blowing the upper breast feathers on a House Sparrow to see the start of moult. This bird has dropped the innermost primary (P1) so is a 3JM. I have not found any sign of the ventral tracks on the body until P3 is starting to appear. Note the paleness on the inner section of the primaries (see end of article). 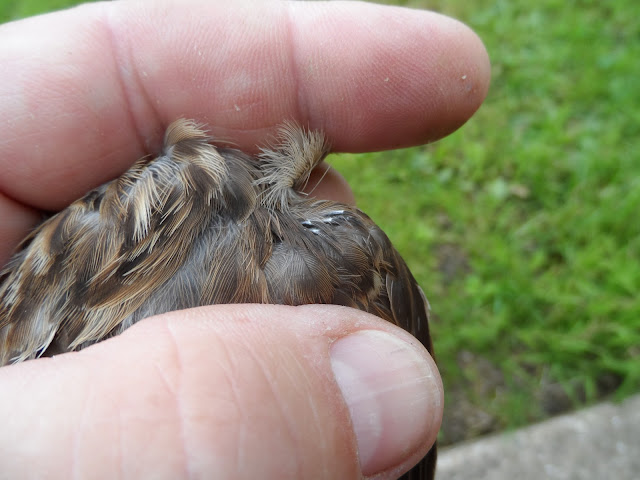 Sexing of juvenile birds is possible at quite an early age. As the primary moult is progressing the marginal coverts are moulted. This female bird had dropped P4. 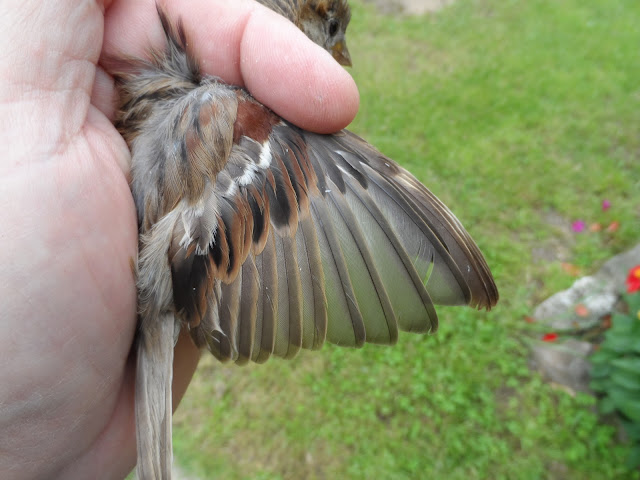 5 old primaries and this male bird with a moult score of 22 or 23 has replaced GCs, but has yet to complete the lesser coverts and tertials. 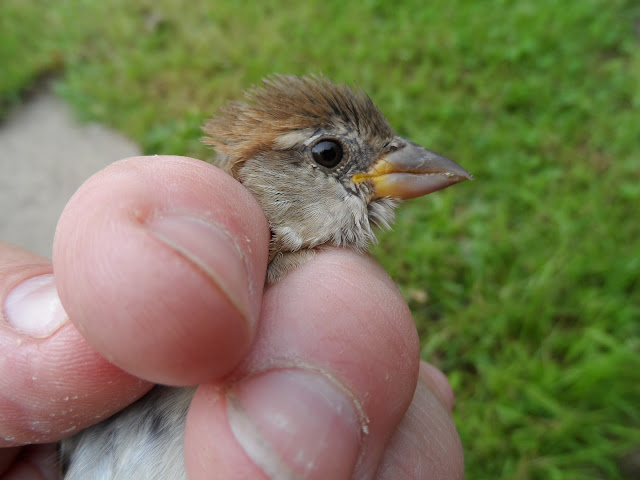 Adult females and juvs. can sometimes be a little awkward to determine. Reddish brown tones in the head and a signs of a gape are always useful pointers for juveniles. 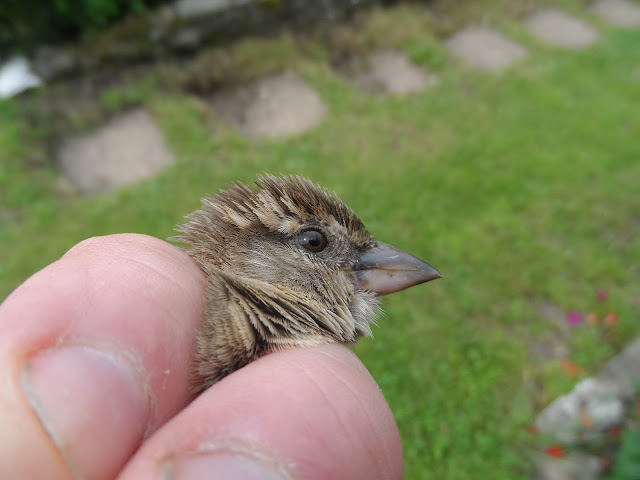 This adult female shows some warmer chocolate brown markings in the head and no gape. 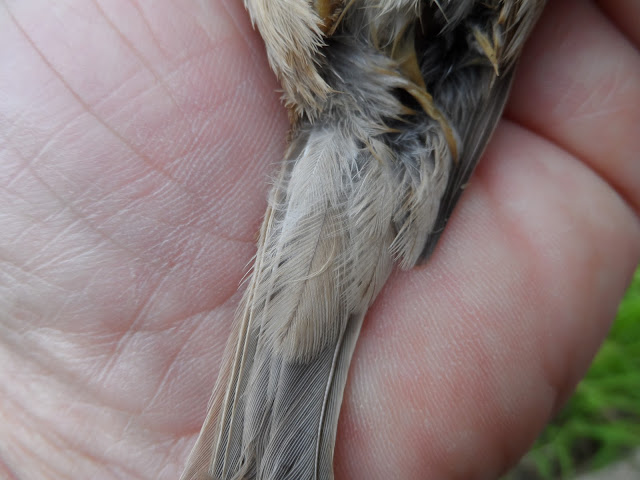 In marginal birds, under tail coverts are always worth looking at but House Sparrows will readily mess these feathers. Compare these loose juv. feathers with the bird below. 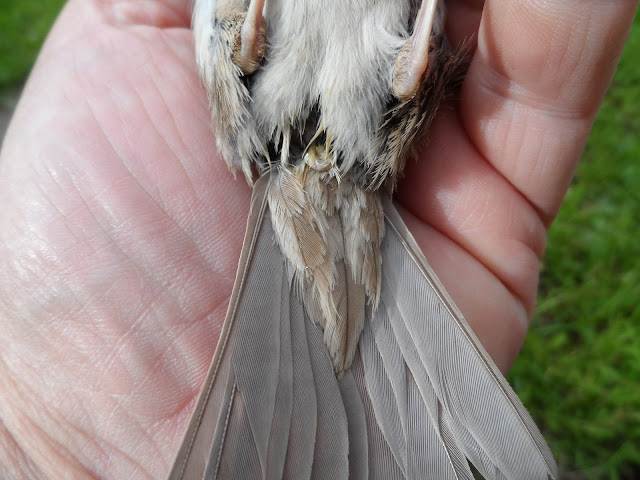 The adult female under tail covers have more structure and as in this bird end abrasion can be seen clearly. Some adult female birds will have little of these feather remaining. 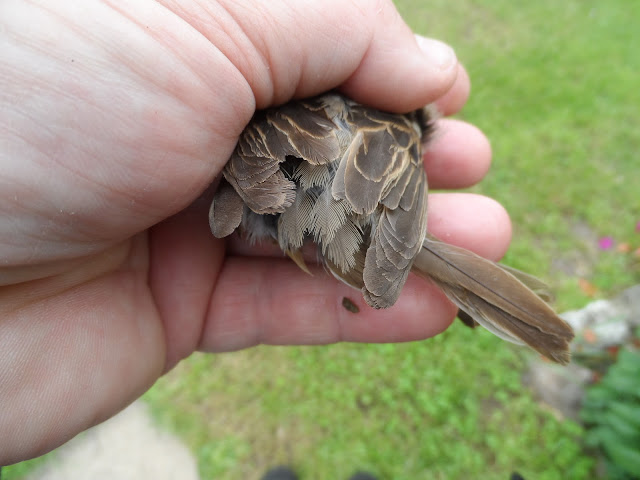 If the under tail coverts cant be used, the upper tail covers will usually show fretted ends to a structured feather as in this adult female. 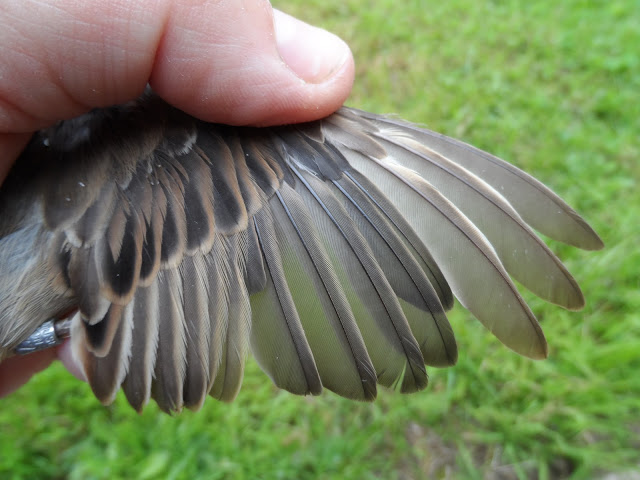 This juv. female has a moult score of 23, P6 has dropped and the secondary moult has begun. Towards the end of moult, many House Sparrows can still be aged by looking at the weak structure and colour of any remaining inner most secondaries. 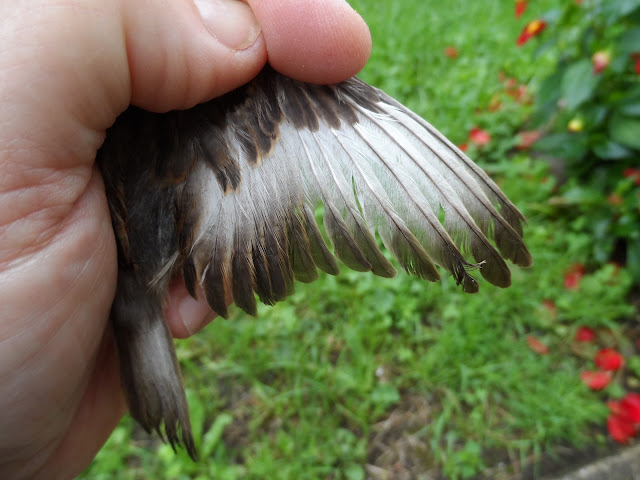 This juvenile was quite different from other birds. It is quite usual to see poorly pigmented wing feathers in juveniles but this is quite extreme and also appears in the tail. My observations suggested that this bird was not part of any flock and was often feeding and flying around by itself. 3JM, moult score 1.
The moult detail recorded in the juveniel birds handled in 'my little part of' Carmarthenshire followed that detailed in Ginn and Melville - Moult in Birds ISBN 0903793024.
Posted by Andy T at 15:57