With 2020 over, I accessed my House Sparrow data on Demon and found that I ringed 475 new birds during the year. 367 of these birds were identified as birds of the year and 70 were adults/breeders from 2019 or earlier. 38 of the birds were caught post autumn moult and so ageing could not be specific. In addition, a further 14 birds ringed between 2017 and 2019 were also reencountered however this figure is considered light as annual totals for the species in this period were relatively low (2017:28, 2018:124, 2019:49). The resulting number of individuals encountered during 2020 totalled 489.

In mid-October 2020, I began to fit colour rings to all birds. By the 31st of December, 52 rings had been fitted and so the process of sighting and recording began. I contacted all the householders in the village to inform them of the ringing and was pleasantly surprised to be contacted by three interested parties. While looking for colour rings on days when I chose not to ring, I was quite surprised to see numerous individuals that did not have a metal ring fitted and so with a little more effort I might have got to the 500 figure!

The 52 birds colour ringed comprised of 30 new birds and 22 reencounters with 8 of these being individuals from previous years which is probably sufficient to show how difficult it can be to recatch the savvy House Sparrow.

I built several ‘potter’ type traps to avoid mist netting regularly, but these traps have proved completely unsuccessful in respect of House Sparrows. The garden is large enough to allow some randomly positioned nets now and again. As my hens are inside due to avian flu precautions, the robbing Sparrows are not lurking around the chicken hut at feeding time so no point in mist netting the bushes in that area now. Little depressions in the ground in my poly tunnel path tell me that birds are dust bathing so I will have a net up in there one day and possibly catch the culprits. It will not be long before amorous birds are hammering around the garden and catches will increase if I keep plenty of bag in the net.

I use modified circlip pliers to fit the mini darvic rings. Ideally, I would have fitted the rings so that they can be read from the bottom upwards when viewed from the outside. Immediately I found that the direction of coiling meant that I would have to fit the rings to read top downwards to minimise the opening of the ring while maintaining good visual aspect during fitting. This may be partly down to my technique, but you need to work in a safe and comfortable way. To date, I have broken one ring, the first ring, by trying to open it too far. I have found that dropping the rings into warm (not hot) water is enough to relieve the stress in the ring especially when the ambient temperature is low. 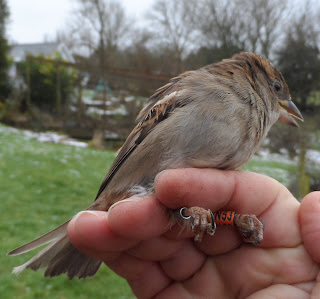