As we head into autumn migration we have had a look back at data for Sedge Warbler catches just in our Mallard nets on the Teifi Marsh.

In July we catch relatively small numbers of locally bred juveniles and adults then in August the main passage of migrants start, mostly juveniles.

This graph shows the total number of new Sedge Warblers caught with similar effort with nets around Mallard pond each year since 2010. 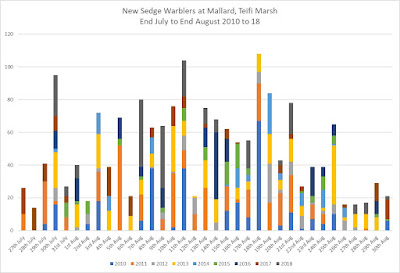 The main conclusion is that we need to open the nets every day that weather permits during August otherwise a peak could be missed. The peak has been different each year but the bulk of the Sedge Warblers pass through around the middle of the month. The largest and most memorable day that can be seen in blue on the graph on the 18th Aug 2010 when we caught an Aquatic Warbler along with 67 Sedge Warblers. (the 5th Aquatic for the Teifi Marshes)

Controls and recoveries of Sedge Warblers last year, shown on this map, were fairly typical of most years particularly the sites along the West coast of France. 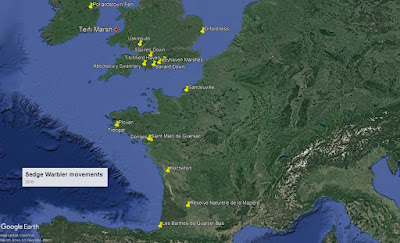