A Woodcock to Lambeth South London 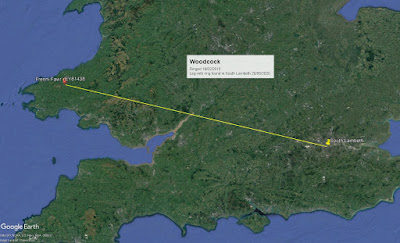 Luckily the leg was carrying the ring of a bird we ringed on our Frenni study site in February 2015. If this bird was killed locally to London then presumably it was on the usual migration for our Woodcock back to the breeding grounds of Russia...
Wondering... was this was the result of London Peregrines, or of the game meat trade ?

The table below show our captured species totals by location during May 1st - June 14th,
(a period with movement restrictions) 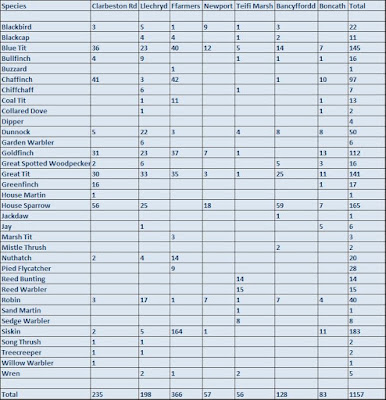 Due to the travel restriction being lifted slightly some non garden pulli were ringed, of interest Dippers and Pied Flycatchers by Karen and Great Tits by Andrew.

165 House Sparrows captured - a greater total than the 145 Blue Tits, with both Alison and Andy recording more than 50 captures.

Arfon and Wendy have now carried out "Garden CES" 3 with encouraging results in terms of variety of species and numbers. Enough data to be able to help decide the feasibility of  long term  garden CES studies. 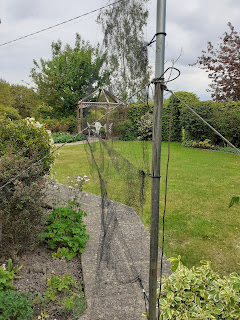 This net across the lawn has caught a wide variety including Treecreeper, juvenile Blackcaps and Chiffchaffs.

Those local to Cardigan could enter the Teifi  Marsh sites from the 7th June. 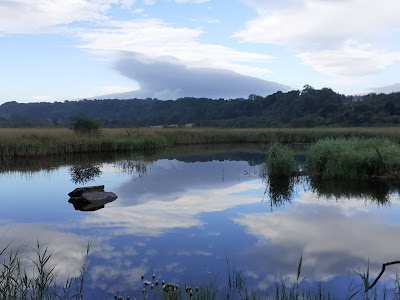 Our first juvenile Kingfisher, Chiffchaff and Blackcaps have now been ringed and both RAS projects on the reserve now have a good start.
21 Reed Warblers have surprisingly included 11 new birds all of which were showing signs of breeding.
17 Reed Buntings, the oldest ringed in Aug 2011 and we ringed the 1st juvenile yesterday.
A Wren caught yesterday was ringed in 2015 and is worth a mention being 5 years old.

Looking ahead - Arfon has secured permission from NRW to untertake a RAS project on the Willow Tits there. Andy has visited Blaenduad a couple of times since a recent extensive forest fire.
Fire at Blaenduad pictures from a local farmer which shows the habitat at this site.
Although much of the burnt area was good habitat the Land Managers are keen for Andy to continue to ring and help monitor the regeneration.

Posted by Richard Dobbins at 20:18