July 2020 will be known by regular visitors to the Teifi Marshes for the abundance of Kingfishers being seen and photographed.


More about our Kingfishers in the next blog but first some monitoring and migration from the Teifi and other Group sites..

A Willow Warbler ringed at Andy's forestry site, Blaenduad in Carmarthenshire in its 1st year on 02/09/2019 was subsequently encountered by Alison in mid-Pembrokeshire on 27/05/2020,  40km SW.

Alison's latest migrant in the garden.....

This Sedge Warbler viewed through the window in the rain.... 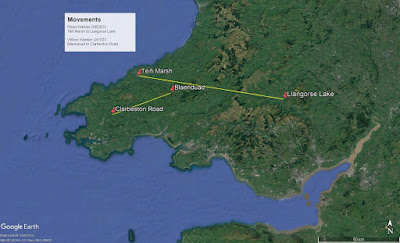 During July we have been able to visit most of our sites, this Redstart re encountered on the Teifi Marshes on Tuesday proved interesting - have a  read of  Terns and Redstarts on the Teifi for more..


We caught  2 Storm Petrels at our Mwnt "Limekiln" site on Wednesday and we are planning at least 3 night sessions during the week ahead.

Our efforts will be stepped up at other sites too now passerines are beginning to move after breeding.

Some notes about our  BTO RAS projects  (Retrapping Adults for Survival)

Andy has now ringed over 220 House Sparrows at his local site - this may become a RAS study soon.

One of our current RAS studies is going well so far this season, with the following Reed Warblers encountered 1st April to 18th July
23 retrapped from previous years and 53 new birds.

Our Reed Warbler RAS is one of 10 active projects in the UK.


The Reed Warbler RAS national trend shows a slight but gradual decline in the survival rate from the start of the trend in 1981 but more stable in recent years.
Our Teifi Marsh Reed Warbler trend shows more of a decline in survival than the national trend since 2015 but on average our adult survival rate is slightly higher than the national average.
The results contribute to the analysis of populations in BTO Bird Trends See the details on the BTO website
Reed Warbler trend

We have also had analysis of our Teifi Marsh Reed Bunting RAS from the BTO.


Ours is the only active Reed Bunting RAS project in the UK.
The quality of the national trend is considered to be ‘Uncertain’due to the sample size and only one project in operation. Interestingly the recapture probability for females is lower than that of males. This could be due to males being more prominent while nesting and thus more catchable/viewable.
The National trend can be seen here which is calculated from other projects.
Reed Bunting trend

Hopefully some other ringing groups will consider a Reed Bunting RAS in the future to improve the quality of data.

Posted by Richard Dobbins at 20:55